The weather has warmed up, the snow is fast disappearing, and this morning Lucy and I headed out in a gentle rain for a walk about town. It was her first walk since having the puppies, and readers may remember that our previous walks had been very short due to her extreme anxiety.

I decided to dress her in Oliver's old coat - for warmth, for protection from the rain, and most of all as a sort of anxiety wrap. Some dogs who are anxious feel calmer when wrapped in a special "anxiety wrap" or a stretchy tee shirt or other cosy covering. Oliver's coat fit comfortably around Lucy's torso, though it was a few inches short along her back. Still, Lucy didn't mind it in the least. (She did ask why it had the letter O on the front, but I told her Lucy is her middle name and her first name is really Oh. As in Oh Lucy!!! Which she hears a lot of, these days. She bought the explanation.) 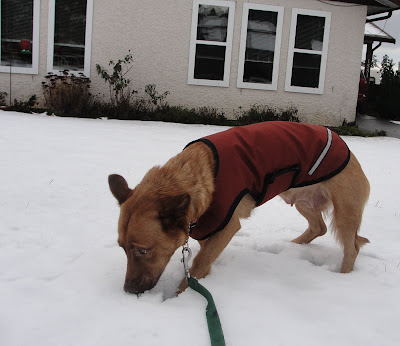 Lucy checks out the snow

And whether it was the wrap, her greater familiarity with me, or the fact that she's no longer packing a passel of puppies, she did do much better than on previous walks.

She did a lot of lip licking (a sign of anxiety in dogs) the first couple of blocks, with her ears flat back against her head, but pretty soon she had her ears up and was trotting along quite happily by my side, even through unfamiliar territory. She became nervous when vehicles passed but the only attempt to bolt was when a very noisy small truck without a muffler roared by.

We didn't go along the seawalk as it is very slippery right now, and I also didn't want her to encounter a lot of unfamiliar dogs on this first mild day in a week. We did bump into our friend Liz and her dog Sasha, and Lucy was very eager to say hi to Liz while virtually ignoring Sasha. Lucy has a good memory for people she has met before.

We walked around the town, through the little parks, up to the community centre and down to the dock, for about an hour. She had as much energy when we arrived home as when we left, and I think it safe to say she really enjoyed herself.

And then I put her in the house and headed off to do some errands and to drop in on Karen and the pups. And now I'm going to leave you with just one teaser photo of what's coming up in tomorrow's blog: 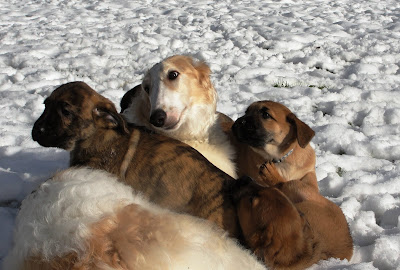 Good for Ms Lucy. I'm glad to hear that you both enjoyed your outing.
It looks like her pups have a new best friend. I've only meet Karen's new two for a brief moment and must get back out there.