Apparently today is National Puppy Day, and on facebook many of my friends are posting photos of their dogs when the dogs were just pups.

I haven't had a pup for eons, as I have adopted only older dogs for the past eleven years.  Some blog readers will remember two dogs I had as pups:  Charley, the border collie/rough collie cross who passed away in 2011; and Emma, a yellow lab who is still going strong at 12 years of age and who lives with my ex.


But since all the dogs I've adopted since then have been older (Caleb, Eddie, Sadie, Belle, Shyloh, Oliver and Mitzi - have I forgotten anyone?),  and since this is -in Bloggerland - also called "Throwback Thursday", it seems appropriate to post a photo of a large crew of puppies with whom some readers will be familiar - The Butternut Squash Gang.  I fostered them, along with their mama Lucy Loo (who looked just like a butternut squash when she was pregnant)  for the Cowichan and District SPCA.  They became the focus of this blog, and of my life, for four months back in the fall of 2010.  Enjoy the memories! 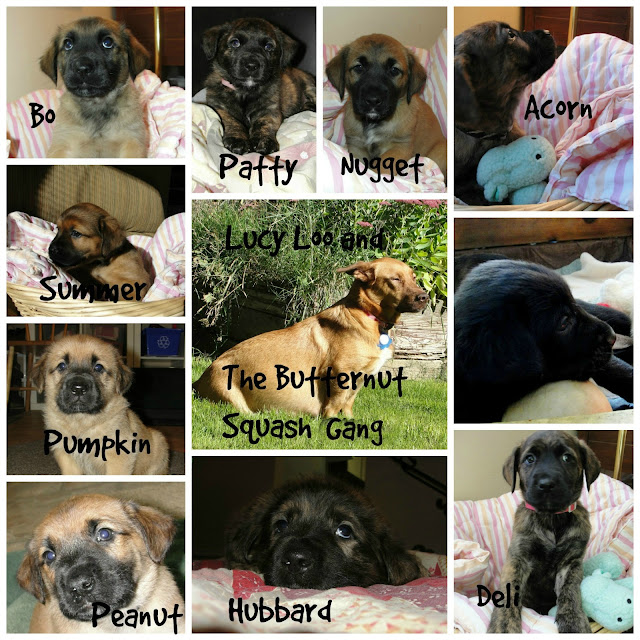 It has been a long winter here on my beautiful island.  The snowdrops and crocuses that usually appear in January or early February were a good month late, and other spring flowers as well as green leaves on trees are also well behind schedule.  But finally, both according to the calendar and according to my garden, spring has arrived.  It was solace to the soul to be out in the sunshine clearing up the winter detritus and discovering the first of the flowers in the garden yesterday.  It is a good reminder that life - all life - is a circle.  We are born, we live, we die, and life starts anew.  It is true for us humans, it is true for our beloved dogs, and it is true for the flowers and trees in our natural world. 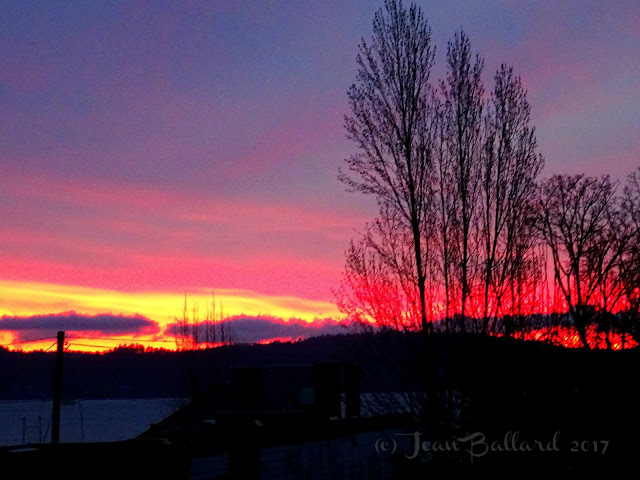 In  my garden, flowers from early, middle, and late spring are all blooming at once - just a few, here and there, but enough to give me a sense of renewal.  Crocuses and tulips, daffodils and hyacinth, and the tiny blue flowers of periwinkle are found in the beds around my yard and the pots on my patios. 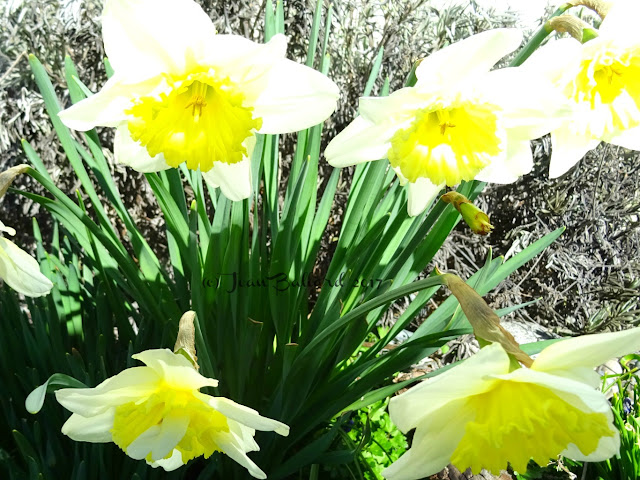 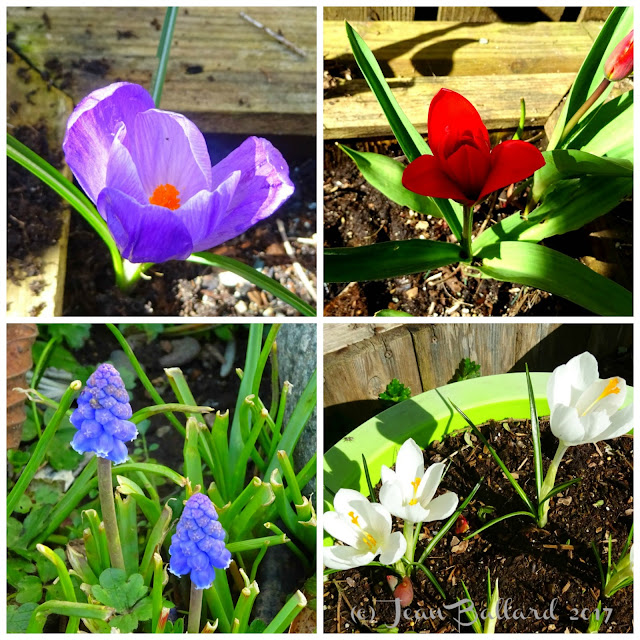 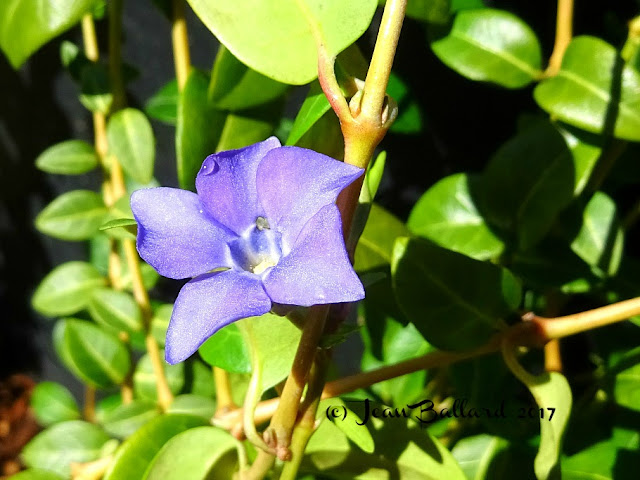 And while these harbingers of spring and summer show their pretty heads, the yellow flowers of the winter jasmine - which has been blooming since November - are still brightening my garden, are hanging on to spring's coat tails, reluctant as the morning frost on the lawn to admit it is time to exit stage left and let the next season begin. 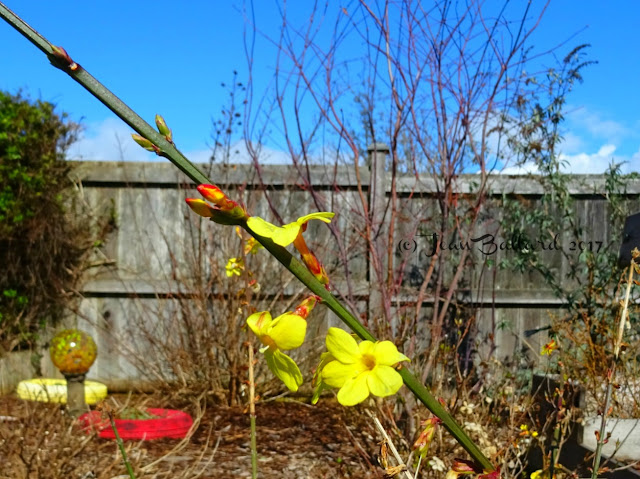 Happy Spring, my readers, happy spring.
Posted by Jean at 8:18 AM 2 comments:

Back to blogging soon - I have lots of photos from recent hikes, and some of friends' dogs, and some of the finally emerging spring flowers.  Thank you for your patience, and for your words of kindness on Mitzi's passing.

To tide you over, here's a shot of  a bullrush shedding its seeds,  from a hike a couple of weeks ago around Buttertubs Marsh:

Forever in my heart, forever and a day.

This morning, at just over sixteen years of age, my beautiful sweet funny Mitzi left God's waiting room and entered the meadows of the Rainbow Bridge.  She went gently, resting in my arms, secure in the knowledge that she had been loved her whole life.  She spent 12 wonderful years with my late cousin, Anita, and then graced me with four more.

I never expected to love her as deeply as I do.  I'd only met her once before she came to live with me, and never felt much draw to small frou-frou dogs.  But she belonged to my cousin, whom I loved very much, and this was one last gift I could give Anita before she died - the knowledge that Mitzi would always have a home where she would be well cared for, loved, and respected for the rest of her life.


I don't think Mitzi was in my house for more than 24 hours before I was totally besotted with her.

She wasn't crazy about having fur siblings, especially not klutzy, crazy, bowl-her-over ones like Eddie.  But she survived him and the others by trying to keep out of their way, staying quiet, and never picking any fights with them. She got her one-on-one time with me on our walks around town, and occasionally on hikes with friends, though sometimes she hitched a ride part way.


She loved her daily walks, even when she could no longer go more than a few blocks around town. The best part of walking, according to Mitzi, was sniffing - she loved to follow smells from one place to another, in the garden, along the seawalk, in fields, around the block.  Her nose was always leading the way - sometimes doubling back if she lost the trail.

When she became the only dog in the house, after the others had passed away, her true spirit came out and I began to see the impish, playful, funny girl my cousin had so often told me about.  She chased me around the house, barked at me, puttered in the yard with me, accompanied me on vacations and horse-sitting jaunts.  In fact, she soon showed me that she especially loved being a farm girl, spending hours wandering the fields, checking out all the great smells.


Despite being a farm girl at heart, she also loved going to the groomers - a cowgirl luxuriating in a good massage and a pedicure. Whenever her fur became dirty, she sulked - becoming sulkier and sulkier until that magic day when we headed to her groomer for her monthly spa day. She returned a happy, lively, beautiful Princess. 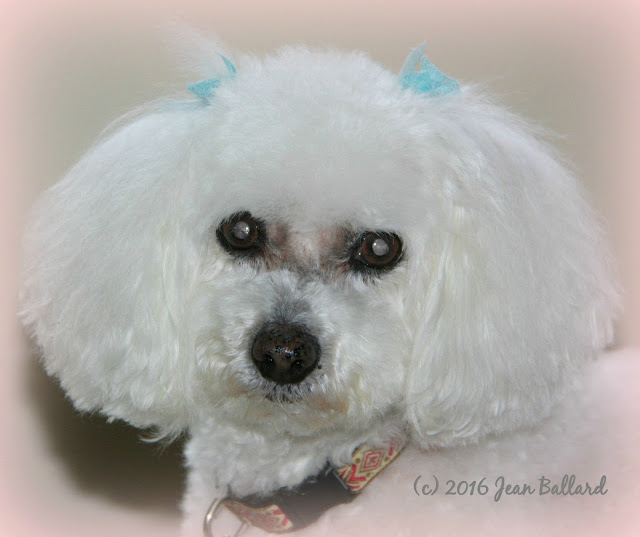 She wasn't one for getting dressed up, despite being a princess, but she tolerated the occasional outfits I produced - hats and dresses and hallowe'en costumes, and came to love her red sweater which she wore constantly these past few months. 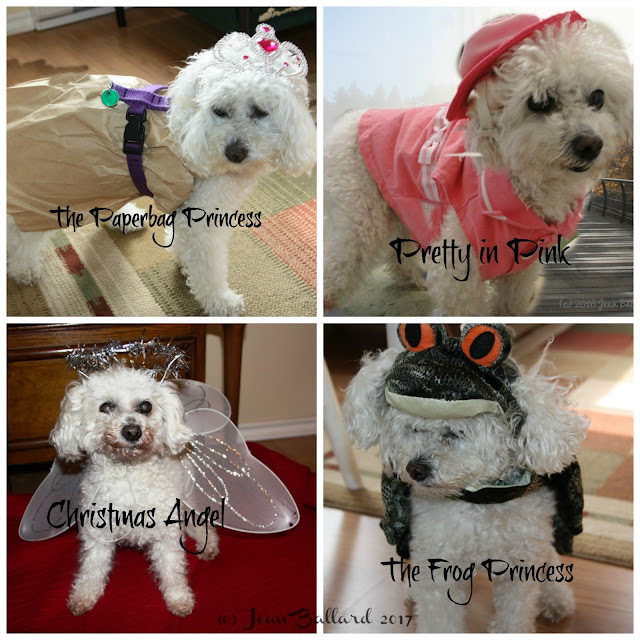 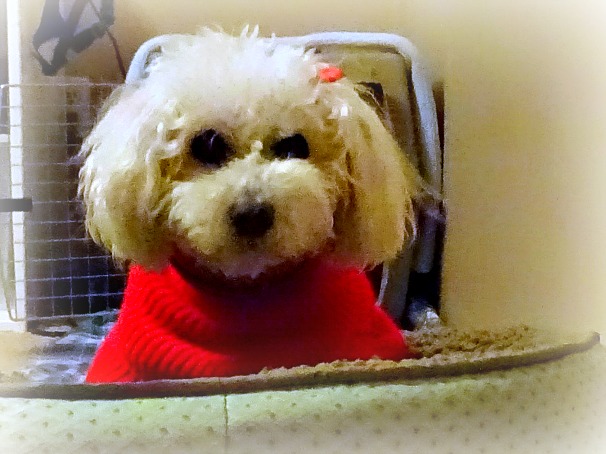 She struggled with her health for the past two years, as kidney failure took its toll and left her without appetite.  But a few days rest and a little medicine, and she would bounce back and once again run in the door from our walk, race down the hall, flip herself around and play bow to me, with a loud bark that declared "play with me, Mama Jean, play with me".  And the game would be on - around and around and around the house we would go, first one way and then the other - tiny eight pound Mitzi chasing me, and me chasing her, each hiding around corners and jumping out at the other, until she eventually stopped, panting, and headed for the water dish.

She was still playing her little game on her birthday mid-January, but a few days later, she stopped. In early February I called her vet and we re-ran her numbers and knew that the kidney failure had progressed to the final stage. And though she had bounced back many times before, this time she did not.  She stopped barking, she stopped chasing me, and a couple of weeks ago, she made it clear she no longer wanted to go for even short walks. Instead, she started asking for something she never in her life had been interested in - being held, cuddled, wrapped in a blanket on my lap for hours on end. She became weaker, yet every couple of days she would eat a little, or wander around the house looking for me, or sit on my lap watching me as I sang to her. She looked at me with her clouded eyes once dark black, and sank her wee head into my shoulder.


I knew yesterday it was time.  It was in her eyes, and it was in my heart, though I did not want her to go.

I knew that she could see the Bridge, could see her Mama Anita, and my sister Carole who also loved her - they were watching for her, waiting for her, arms outstretched.


And this morning,  surrounded with my love,  she raced across that meadow to them, barking and spinning and play bowing as she went.

Run free, my most special little girl. I'll love you and miss you forever and a day.

Last week, on a clear and sunny spring day, Pat and I took poms Lexi and Cosmo for a walk around the estuary at Cowichan Bay.  With views of ocean and mountain and river and fields, it is always a beautiful spot for a walk - and for photography. 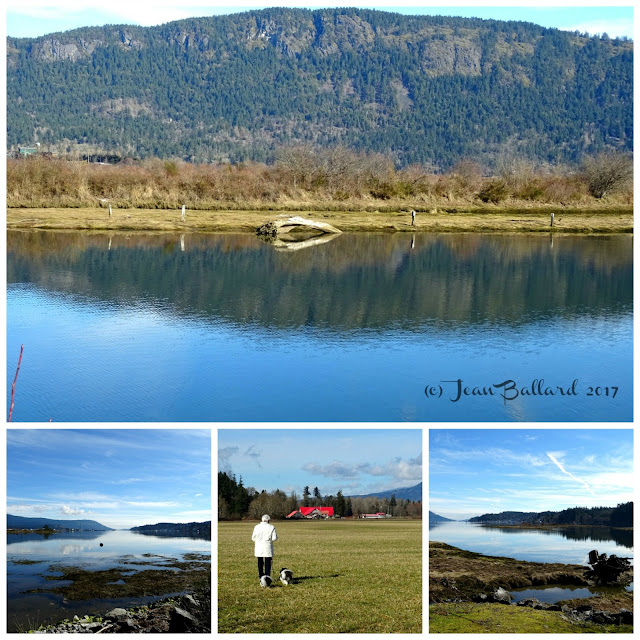 Though spring is late here on the island this year, we did see buds on the young trees near the trail access. 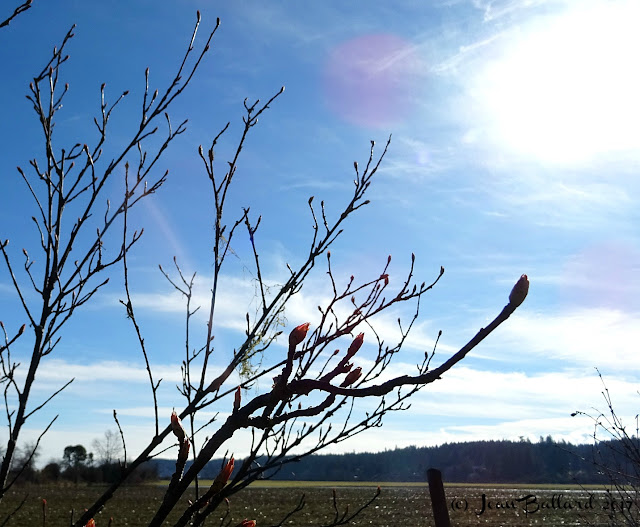 There was lots of colour, too, in the water and the sky. 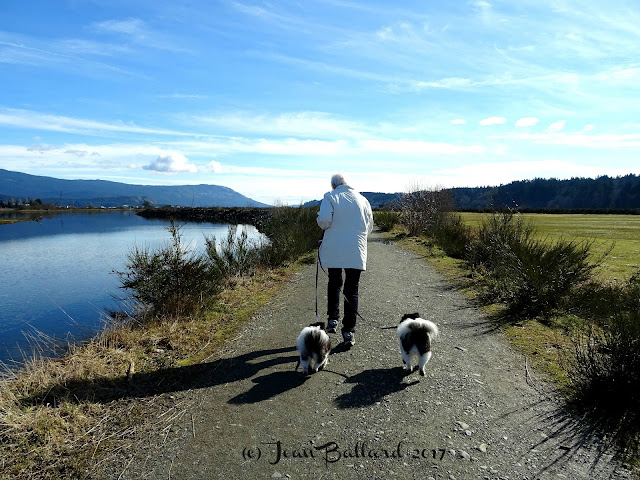 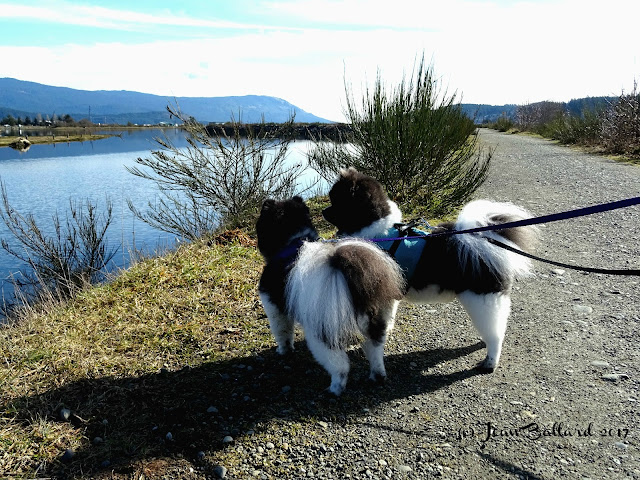 Red and yellow spires from a bed of moss made another colourful shot, 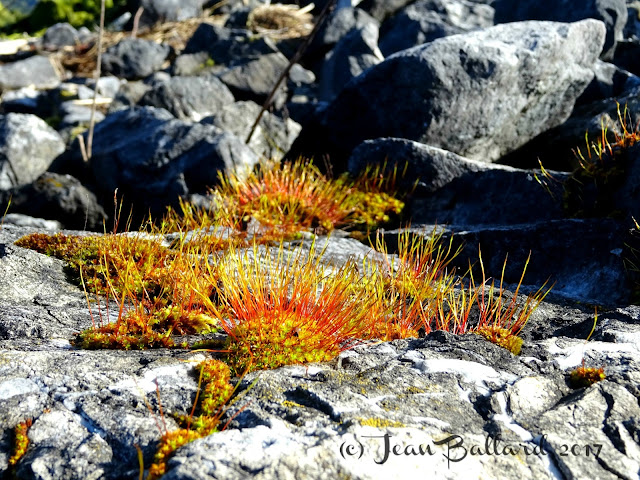 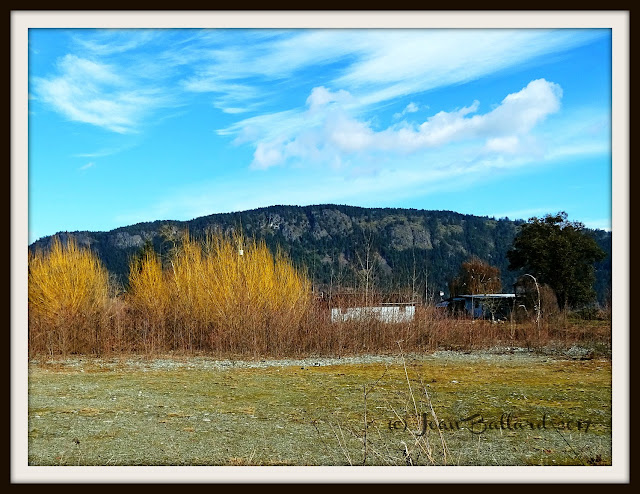 Amid the blues and reds and yellows were less vibrant but equally beautiful sights,
like the trumpeter swan paddling between mounds of land and grass, 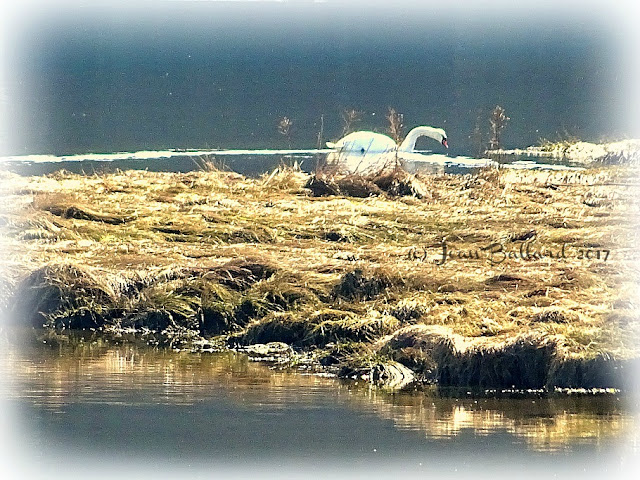 and the detritus of last year's reeds and grasses, waiting for new growth to take their place. 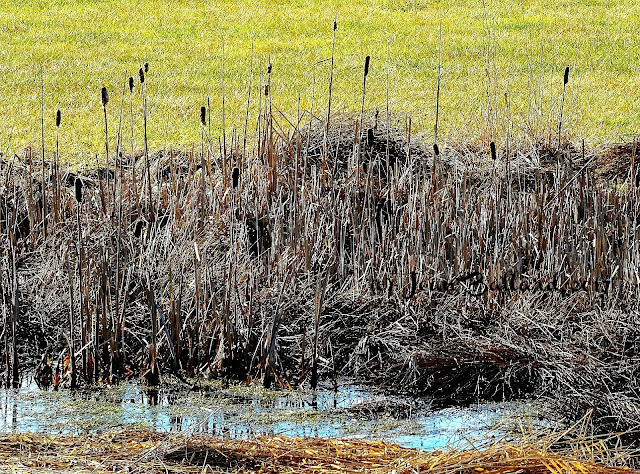 Water everywhere - left, right, and straight ahead - with reflections of beauty, and gentle ripples from the crisp light wind. 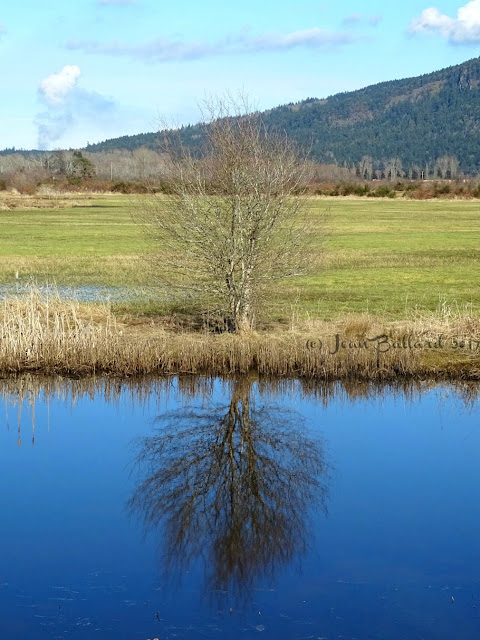 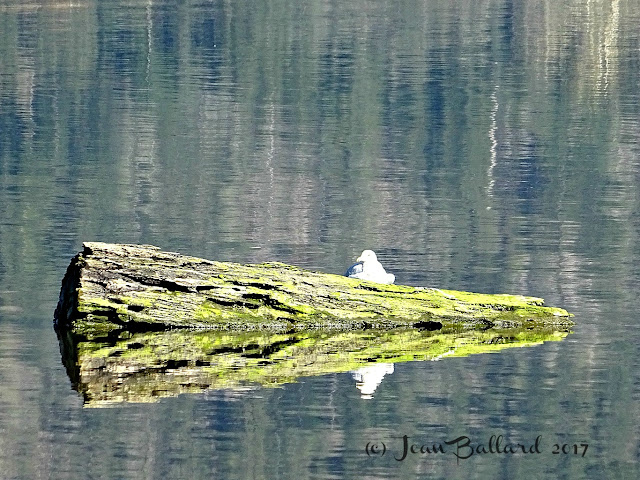 After our walk, we went back to Pat's for lunch, where I spent some time with their third pom, Chrissy - my most favourite pom ever (shhhhhh....don't tell Lexi and Cosmo!).  I call her my Phyllis Diller dog, because of her stand-straight-up spikey hairdo. 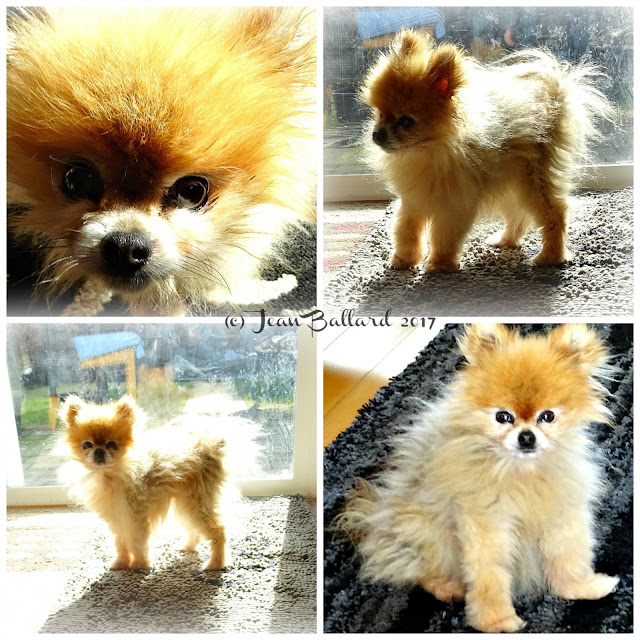 I even persuaded Pat's husband to pose for me holding his girl - Chrissy is his velcro dog, stuck to him like cotton candy to a four year old's face. 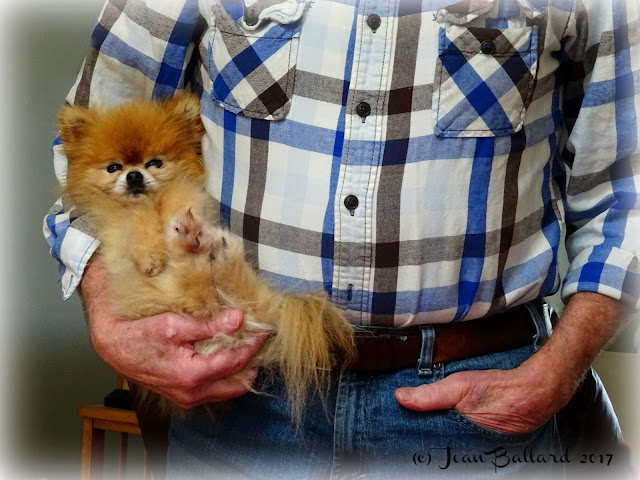