Mama and Me. Posted by Maggie.

Enough is enough.  I know my mama has some photos ready to post but I can see her snoozing in her recliner AGAIN, so I will just take my dainty little paws and  place them on her 'puter and post for her.  We's been here over a month already and she hazn't even shown you what we've been up to!

We live a couple of blocks from the beach, so nearly every day we go down there for an hour or so.  I love this beach - there is lots and lots and lots of good sand!

Sometimes the sand has firm little ridges all over it, and sometimes it is smooth as silk.  And sometimes there are little islands in the ocean, or pretty shapes where the ocean hugs the sand or the sunlight tiptoes across the shallows and over the sandbars. 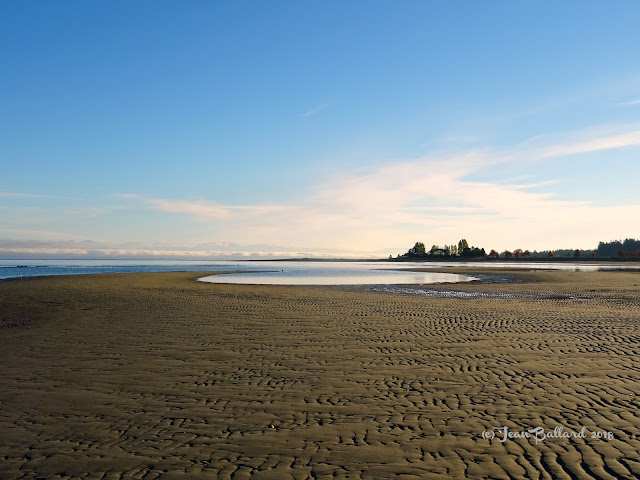 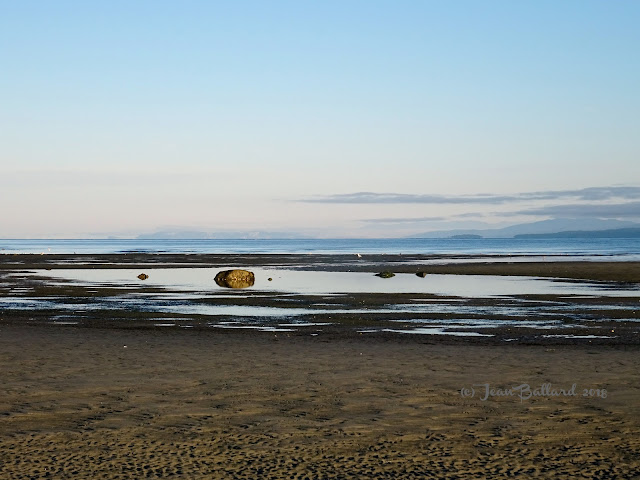 In the morning, Mama often makes me walk around town first before we head to the beach - there are lots of noises I wasn't used to, like beeping things and roaring things and clanking things, as well as fast moving things and unfamiliar peoples and unfamiliar dogs.  And squirrels!  There is LOTS of squirrels here.  They is almost as good at grabbing my attention as ducks! Maybe better. I don't have a picture of squirrels to show you, but mama did take this photo of one of the places we pass on our way to the beach - pretty fall leaves shining in early morning light. 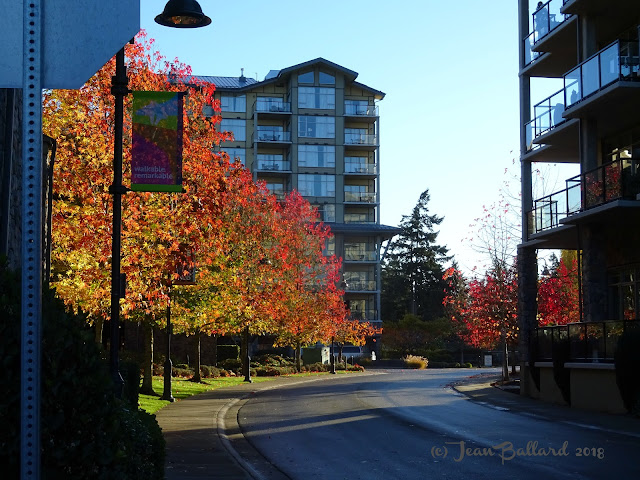 There is a long boardwalk here, just like the seawalk in Crofton except closer to the ground.  Sometimes we see my new friend Buddy there - he is a cocker spaniel who is old and blind and so mostly he rides in a stroller.  He's nice, and so are his pals that he walks with - human and canine.  Mama likes the houndy dog best because he always bays at her and makes her laugh.

My favourite new dog friend, though, is Gideon.  He is just little, and he loves to run on the sand just like me.  We see him almost every day.  He's in this picture with his human, but mama still has to take some close up shots of him. 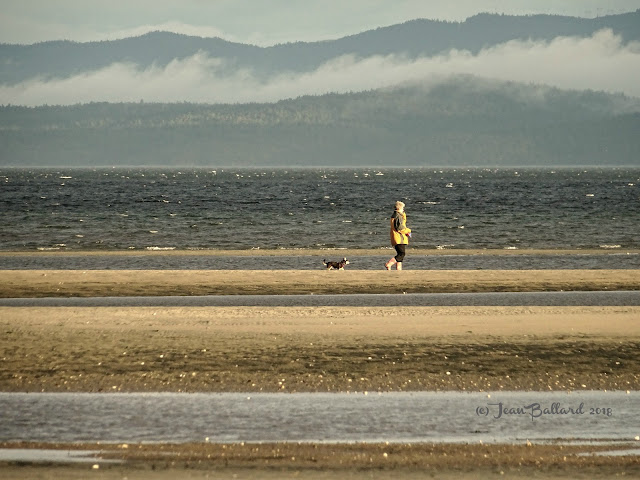 Here's me on the beach again.  Did I mention I love the beach? 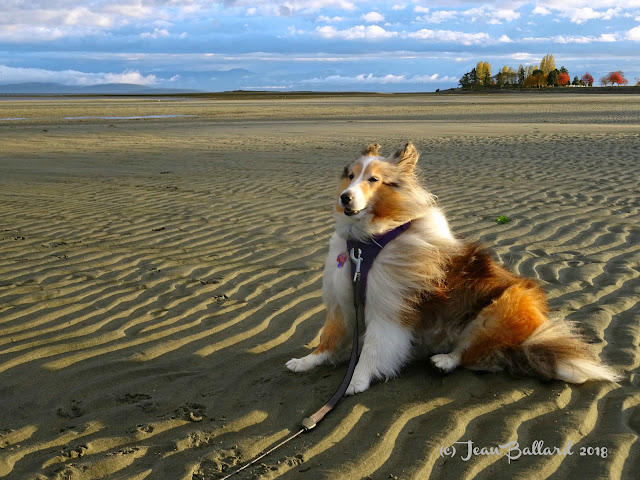 It was a little bit breezy that day.  Mama likes the breezy days, partly because there is a big kite-flying field (um, that's a field where you can fly kites, not a field that flies kites hahaha!) by the beach, and mama loves to watch the kites zoom and soar and dive and soar some more. Mama has always loved kites, even when she was just a little girl and tried to make them out of sticks and newspaper and string.


Sometimes when we go to the beach the ocean has swallowed up all the sand!  I don't like that because then I have to walk on the boardwalk and mama won't let me bark and run there in case I disturb others.  But sometimes the sand is there, with puddles on it, and I can see buildings in the puddles!

I have become very brave here and even go walking in the dark now.  I walk for an hour or two in the morning, and another half hour or more at night.  And I go hiking with mama as well.  You'd think we'd both be skinny with all that walking, but I get lots of treats because I'm learning so many new things and meeting so many new people and dogs.  I don't know what mama's excuse is for not getting skinny - I suspect she's getting lots of treats too - there are some very nice food stores here! But I digress.....I was talking about hiking. Mostly we've gone hiking at the same places we went before - in Nanaimo or thereabouts.  This week we went to Ermineskin Nature Park near here, but mama hasn't done those photos yet.  Here's the photos from some of the familiar hikes we've done this month:

One day Auntie Pat and Uncle Guy and ALL THREE POMS came to visit.  We all went for a walk on the beach.  It was Parker's first time on the beach, but mama forgot her camera.  She took some pictures with Auntie Pat's camera but Auntie Pat must be snoozing in her recliner too because she hasn't posted them yet, so mama couldn't steal one to show you.

There have been a lot of strange people in our house, besides some of the new neighbours.  There's been furniture coming in and furniture going out and appliances coming in and appliances going out, and I've visited a new groomer already, but I haven't met my new vet yet. Mama sez that will be very soon. We still isn't all settled in yet - there's still pictures to be hung, and a couple of piece of new furniture to arrive, and a new dishwasher to be installed.  But we is getting there.  I don't care though - I just wanna spend time at the beach.  Did I mention I love the beach? 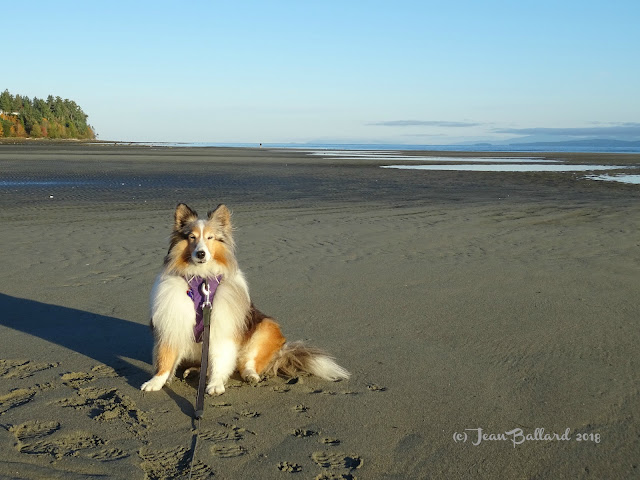 Most days there is lots of sand, and we walk waaaay far out.  We go quite early, so we see lots of birds - eagles and herons and ducks and gulls and hundreds of tiny little ones that mama things are sandpipers but there are also bigger ones among them that look more like plovers or dowitchers.  Mama can't get too close to get a good picture because...well...um....I likes to bark and go after them, even though I'm always on a leash or longline. Then they fly away, and mama says "Ohhh Maggie!" with a big sigh.  Sometimes there are hundreds and zillions of the little birds, and they are beige on one side and white on the other, and when they fly the whole flock rolls from one side to the other so you see all beige and then all white, like airyplanes doing fancy tricks!

Okay, well, I think I hear mama calling me, so I better get down from the desk.  Maybe it is time for my pills.  And a treat.  I hope you enjoyed a look at our first month in Parksville.

Dear Readers:
Mah mama seems to be either toooooo busy to post or too sleepy......so I will just post this photo of  li'l ol' me from a hike we did on Monday.  Mother Nature was so kind to coordinate the colours of fallen leaves with mah furs.
And you can do your bit by nagging Mama to get another proper post up real soon!
Lotsa love, Maggie. 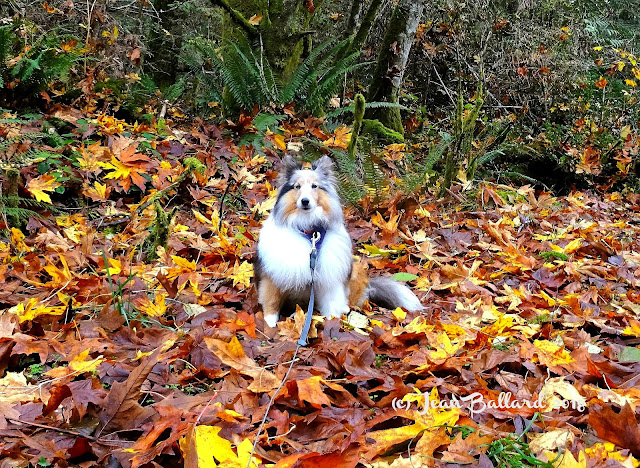