On Monday, my friend Pat and I had plans to take the poms on a hike.  But Sunday night, I was notified of a sheltie who was lost.  That sheltie, Trig, had slipped away from the home where he had lived only 6 days, dragging his flexi-leash behind him.  Trig's former foster mama was the same person who fostered my sweet Shiloh before she came to live with me,  and Trig is also the sire of the absolutely adorable puppy Luke who you were introduced to in my last post.  Trig went missing right near East Sooke park on the southern edge of the island, a little over an hour's drive away, so Pat and I decided to head out there so we could search while we hiked.

What a park!  We will be going back many times - to an ocean the colour of the tropics, a wonderful network of trails, and - in the sunshine Monday - spring flowers blooming, cute puppies hiking, and even two cats out for a (leashed) walk with their humans! 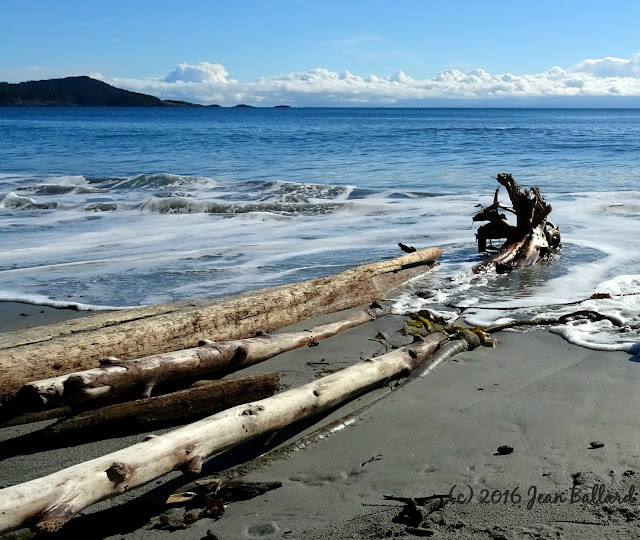 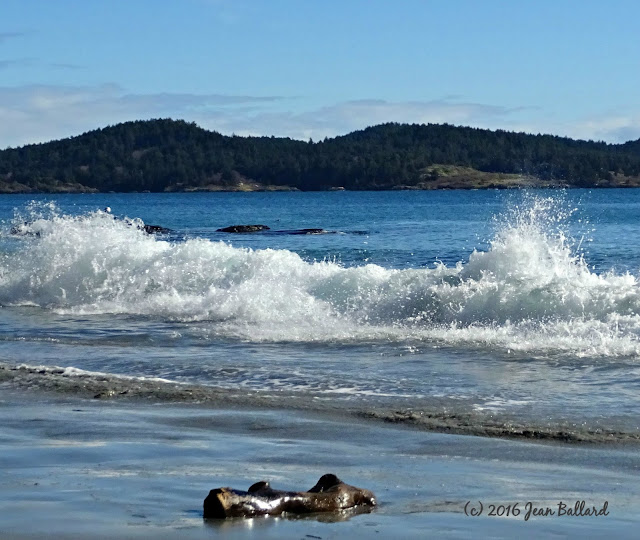 This couple met through their shared interest in hiking with cats.  Apparently there are websites and facebook pages devoted to this phenomena - who knew?  The young woman told us she had found her cat as a wee abandoned kitten behind a dumpster just as she was leaving for a canoeing and camping trip - so she bought him a harness and leash and took him along - and he's been hiking, camping, backpacking and canoeing ever since! 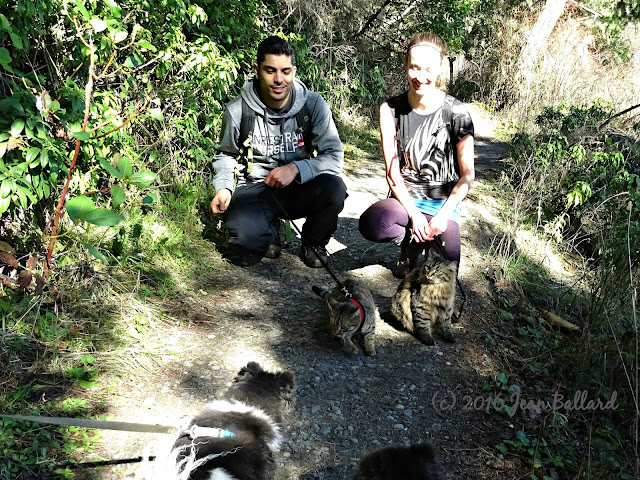 The couple were great guardians for their felines - picking them up whenever a dog approached even if the dog was onleash - recognizing how quickly a dog can move if canine trumps feline.  Of course, the cats know that cats rule and dogs drool, but I think they appreciated their owners' vigilance. 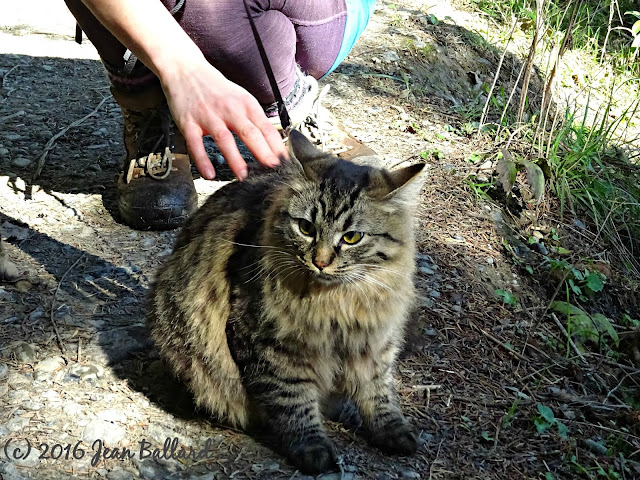 The bays in this park were a phenomenal aqua colour, and the water so clear you could see the sandy bottom from the top of the cliffs. 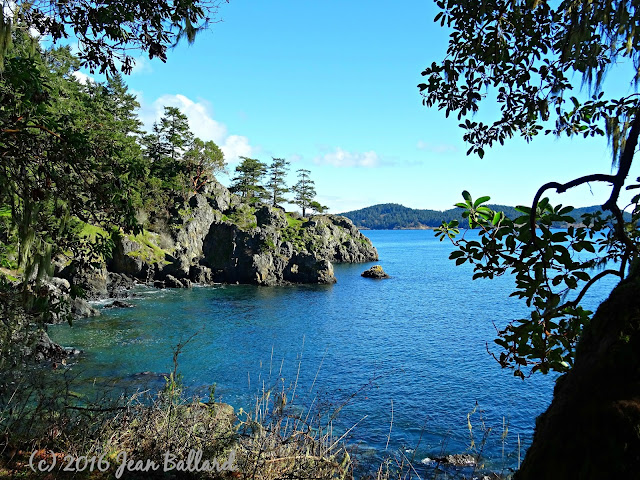 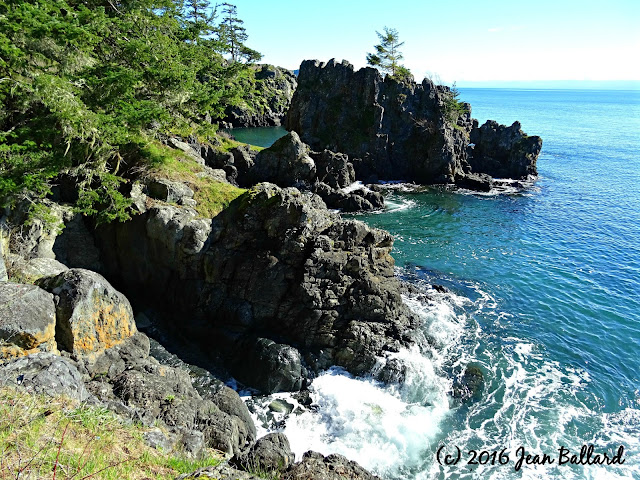 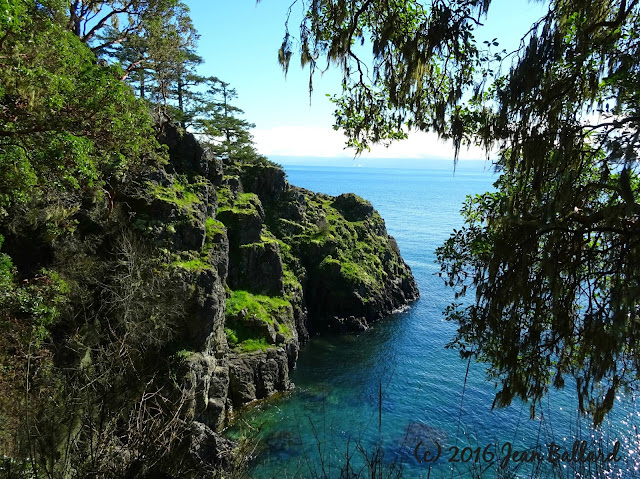 We met this little three month old pup, too - as cute as a button, and friendly and curious.  I couldn't resist taking a photo of him. 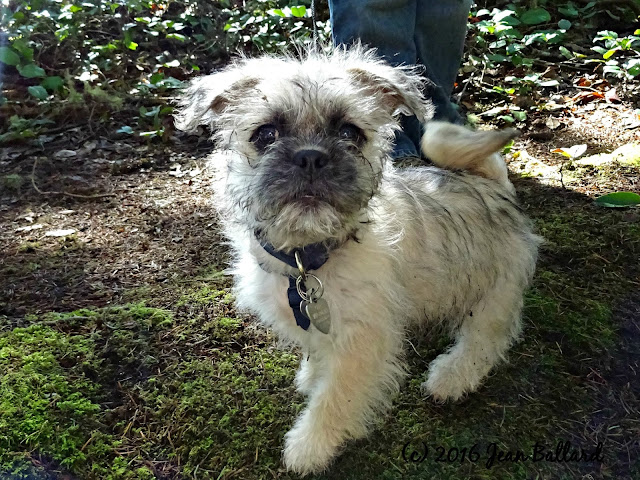 We found daffodils blooming on the cliffs, and in a large open meadow as well: 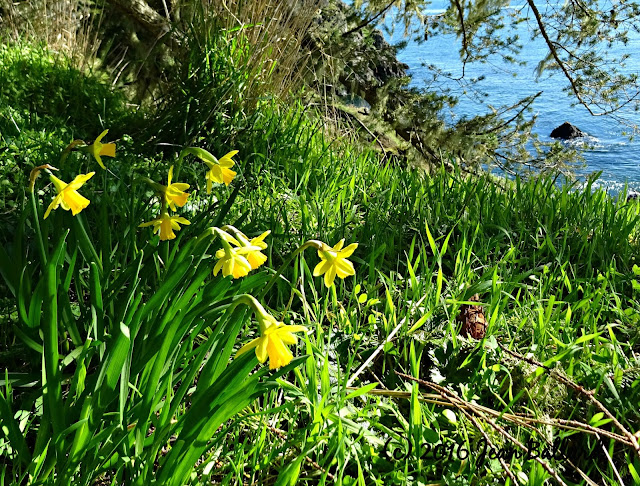 And flowering red currant as well: 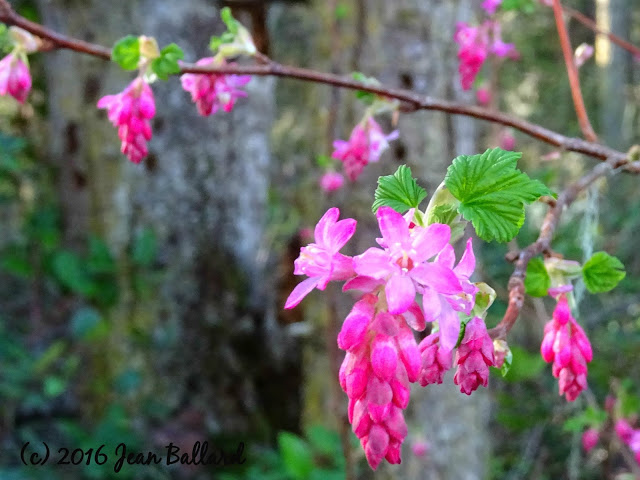 On the protected side of a rocky point, was a quiet bay in soft green.  The lichen hung thick on the trees in white wispy tendrils, with the first of the spring leaves emerging on bushes below.  It felt like walking into a painting. 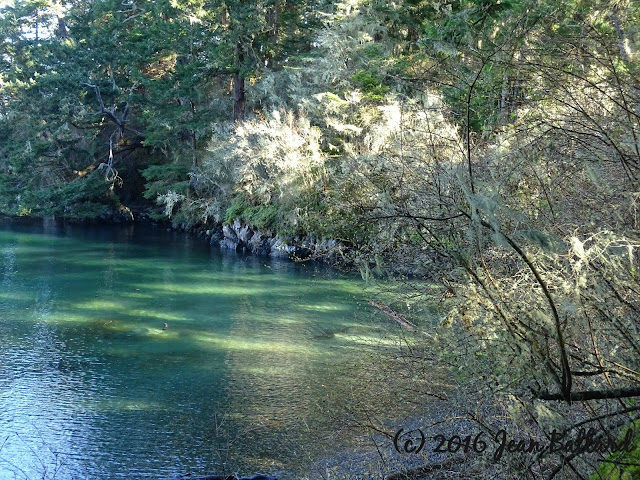 Sadly, no sight of Trig, the missing sheltie - if you live near Sooke BC and are available this Saturday, a grid search is being organized and masses of volunteers are needed to accomplish this through dense brush and forest.  You can find the details of the search here . Just look for the post with the lovely tri-coloured sheltie.
Posted by Jean at 1:34 AM 1 comment:

I was really doing well at putting up new posts every two or three days - and then on Valentine's Day I went on a small dog walk with Teddy, Cosmo, Lexi, Beamer, and........


A sheltie puppy.  A sweet lovable 14 week old sheltie puppy whose owner had asked my friend Pat (Cosmo and Lexi's mom) if I would do a photo shoot of him.

It was a double-melt  when I found out he came from the Shetland Sheepdog breeder who fostered (as part of Sheltie Rescue) my sweet Shiloh!


So....over 500 pictures later, mostly of Luke but also of Teddy and Cosmo and Lexi and Beamer, I'm in photo editing overload.  Add to that another couple of hundred photos from two sunny days at RASTA, plus some hiking photos and some spring flower photos, and a sick Mitzi (who is now well again) and lunch with my cousin who was in Nanaimo for a workshop, and a couple of lost dogs, .and..and...well you get the picture.


I am slowly working through the photos.  I already see several 'stories' emerging, in addition to a kazillion more cute sheltie images.  I have stories entitled Teddy and his Stick,  Dance with me!,  Whose Ball is This? as well as a couple of more serious posts in the works.  There is no shortage of material, just shortage of time. And I may be off line for a few days later this week - though that will result in still more photos piling up.

So stand by.  They are coming.  Soon.  Real soon. Or at least sometime in the next couple of weeks. Patience is a virtue.

Last week, RASTA welcomed Geraldine to the flock - a very sweet goose with a deformed leg and therefore mobility issues, who had run out of options and needed a safe haven. After a few days getting to know the other farmbirds through a barrier, today she was let into the big yard to meet them face to face, carefully supervised by sanctuary owner Lucie and one of the Muscovy ducks.


After a few minutes, they waddled over to introduce themselves.


The four feathered fowl chatted with each other without any sign of animosity. Sarah seemed a little curious about Geraldine's disability, but Sergio soon set her straight:

After a few more minutes of chatter,

It's all about Love!

Tuesday was a sunny spring day, so I took the opportunity to take some more photos of our friends at RASTA.  They were quite chatty.  But then they decided to take over the blog....


On Monday, Sally and I decided to hike the Holland Creek Loop in Ladysmith, about half way between Crofton and Nanaimo.  Before Christmas, we had hiked one side of the loop, which was designated 'easy' on our trail map.  That day, we had also taken a side trail out to a lookout point.  But due to time constraints and uncertainty about the ranking of 'difficult' for the west side of the loop, we had headed back the way we came. You'll find the description of that hike here.

This week, with perfect spring weather and no time restrictions except for sundown, we decided to go for it - to do the full loop.  We started with the 'difficult' side, reasoning that our energy at the start of the hike was good, and we knew just how long and how easy the return side would be. It was, I think, a wise decision. However, this overweight, out-of-shape senior was pleasantly surprised to find that the trail rating system must have been done with the novice hiker in mind, rather than the experienced twenty- or thirty-something jock.  While there were numerous stairs and hills on the 3 km trek up, none were so long or difficult as to become tedious, and there were lots of interesting things to see along the way.

The trail goes through rain-forest landscapes of heavy moss-covered rocks and logs and trees.  The moss and ferns and fungus everywhere was truly beautiful:


But I think this photo of a larger fungus under swordfern that hung over the sides of a rotted stump is perhaps one of my favourites of the hike:

About three quarters of the way up the first side of the loop, we came to Crystal Falls, which is not visible from the side we'd done previously.  The photo doesn't do it justice - I couldn't get a good shot without risking life and limb on wet mossy ground.  The water fall was quite tall, culminating in a large multicoloured whirling vortex in which a small log swam around and around.

There were many beautiful spots to enjoy the creek - from lookouts above it, to places where one could scramble down a short trail, to spots where the trail ran right alongside the creek.


The trail, too, varied in width and roughness, as well as incline and elevation:


Coming back on the easier side of the loop, the sun was lower in the sky and illuminated the creek beautifully: 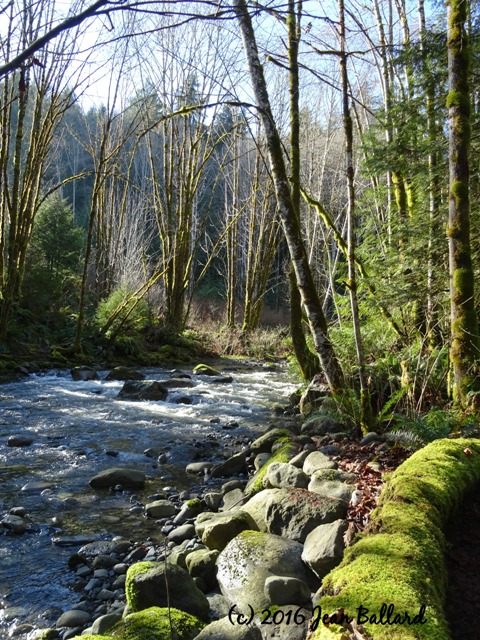 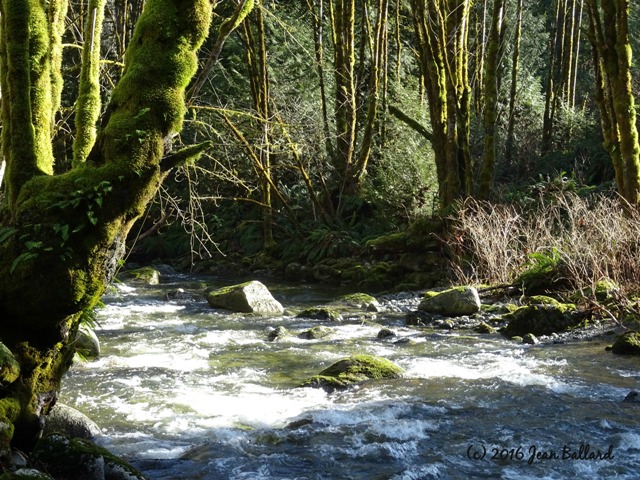 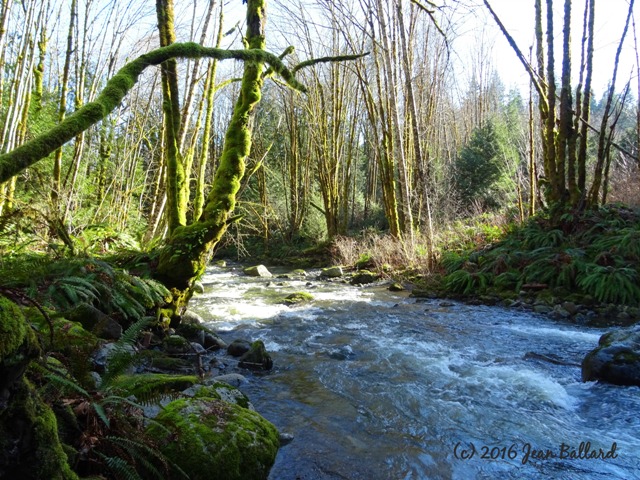 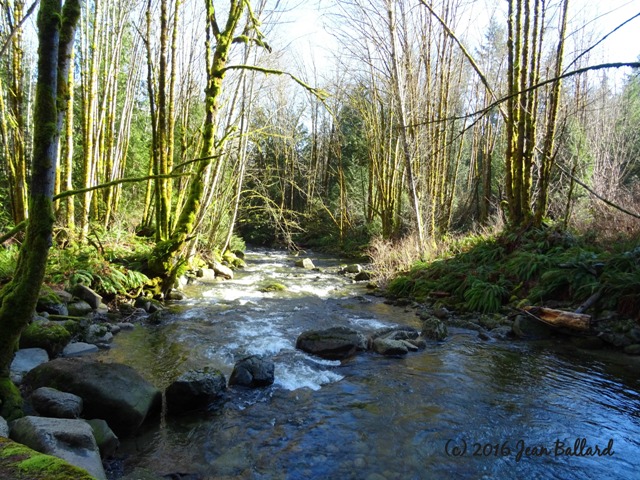 To my delight, a chance glance across the creek to a darker spot in the woods revealed a magical scene, in which the sun caught just the protruding edge of the moss along the tree trunks that quickly became mere silhouettes:


It was a great day for a hike, and a perfect choice for the day.

(Oh, and these photos were all taken with the new point-and-swear camera.  I'm still swearing at it, but I'm thinking I just might keep it.  When I get it right, I like the quality of the image).
Posted by Jean at 11:45 PM 3 comments: