(For those new to the blog:  This letter is to the ten little piggies who were born in my care just after their mama and papa, Scotch and Soda,  were seized in a cruelty case and delivered to my barn for fostering in the summer of 2007.)

I did it again.  I was thinking your birthday was July 30th, but it’s not.  It was yesterday – July 28th.  And I missed it.  I hope someone had a party for you!  If they forgot, you tell the next person you see that it is time for your birthday treat.  Remember to say "please".

You are FIVE years old now.  FIVE!  I bet you've grown a whole bunch since I took this photo:

Or even this one:

Remember the 'cake' I made for your first birthday?

And how handsome Whisper looked in his party hat?

Where did the time go? I hope you are all being good piggies for The Piggy Lady and her helpers.  And I hope you are taking care of Mama Soda and Papa Scotch.  You are all so lucky they were rescued by the SPCA and Hearts on Noses Mini-Pig Sanctuary.

This morning I thought maybe one of you had snuck on the ferry and come to visit me.  I was having my morning coffee when suddenly I heard 'snort snort snuffle snuffle snort' and right away your cute little faces popped into my mind.  But of course, it wasn't you because you are all safely at the Sanctuary.  You see, our friend Georgi is staying with us while her mama is away and - well - she snorts just like a piggy!  Yes she does!

She's a very nice guest, and almost as much fun to have around as a herd of wee little pigs.

Do you remember Sadie, Charley, Belle and Oliver, the four dogs who lived with us and liked to herd you under the hazelnut trees?

They have all gone to the rainbow bridge now - all four dogs who moved to the island with me just three short years ago.  And last time I drove past our old farm, the hazelnut trees were gone too.  So were those lovely big cedars that gave so much shade along the front of our property.  That made me sad, but life changes and you are safe and happy, and I am safe and happy, and that is what counts.

The weather here has been hot and dry, so I haven't been doing too much other than enjoying a little hiatus from volunteering and writing.  Mostly Eddie (my new dog - you haven't met him yet, piggies, but probably will soon!) and I have been watching the tides come and go


and doing a bit of hiking

at Swallowfield, for example.


We have been watching the garden grow,

And the flowers bloom,

And I finished building a great big planter.

And just lying around in the sun,


And thinking of you every day. 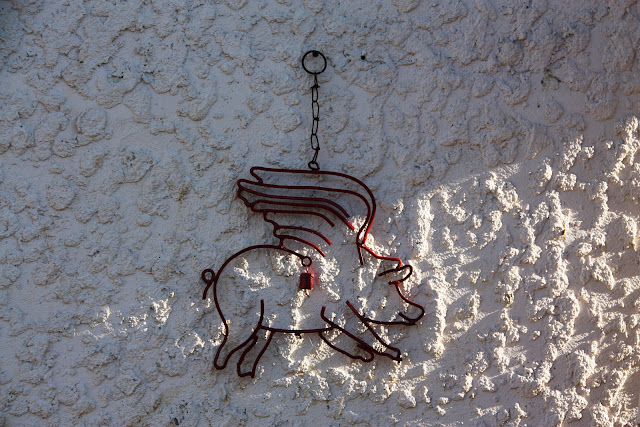 I miss you all and I hope I  see you soon.
Happy Belated Birthday, little piggies.
Love, Foster Mama.

I knew it would happen sooner or later.  Eddie LOVES vegetables - any kind of vegetables.  He has been watching me pick peas for the last couple of weeks, and I usually share a few with him as I pick.  Day before yesterday, I glanced over to the bed where the peas were and saw this: 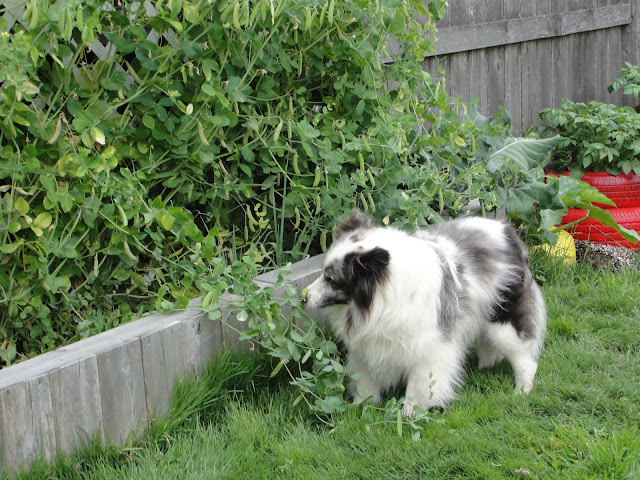 No, those vines weren't hanging over the edge and onto the ground two minutes earlier.  Eddie figured out how to drag them down where he could harvest the peas.

His technique includes a combination of mouth-to-vine and the single-paw-hold: 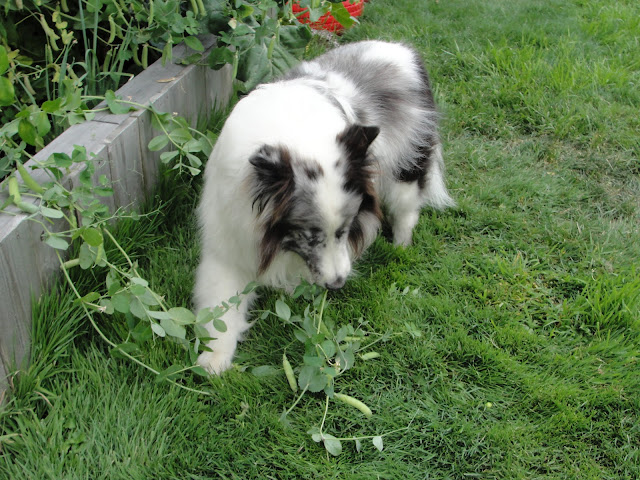 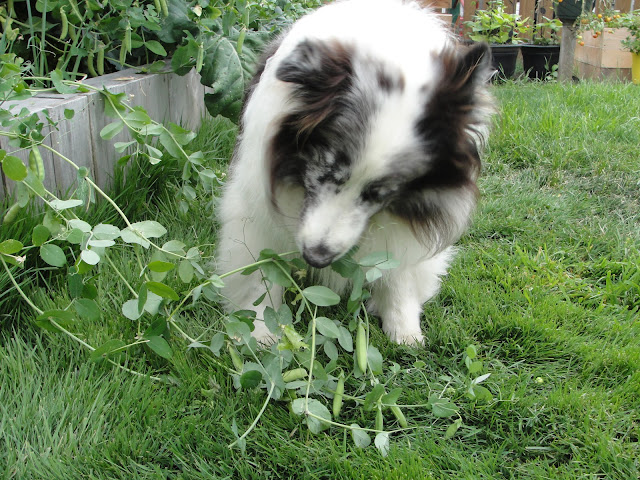 He carefully picks off the peas, eats them pod and all, and leaves the vine. 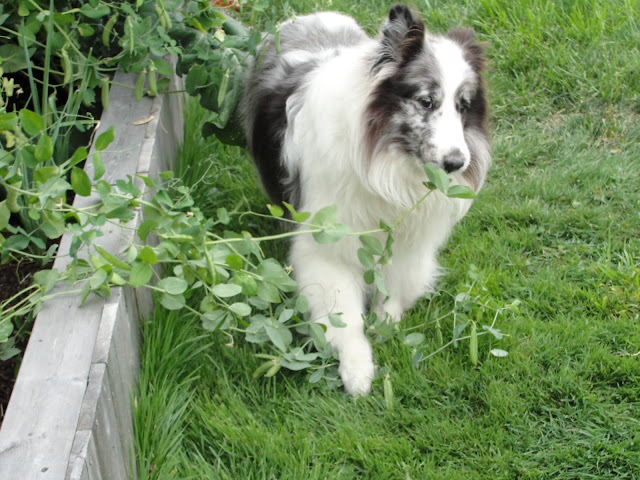 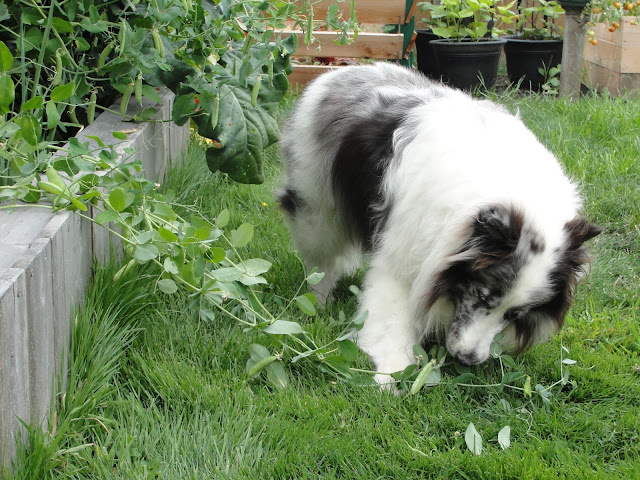 Because we have an abundance of peas and they are nearly at the end of their season, he didn't get in trouble.  I have warned him, though, that there will be big trouble if he helps himself to cucumbers when they finally start to form.  Unfortunately, I expect he's already planning his cucumber-thieving strategy.  Cucumbers just happen to be his very favourite, best-of-the-best, I'll-do-anything-for-some, vegetable.   I just may have to re-install the green snow fence I used when the grass seed was getting established.

Okay, okay, I know it's been over a week!

Sometimes when you just know you will EXPLODE if you start blogging, it is best to remain silent.  No, the renos are not finished.  I'm not going to tell you about the unstackable stacking washer/dryer, the two hours at the library reading up on BC's building code in order to prove that the installers didn't need to cut the fancy chimney off the fancy range hood, the flooded kitchen from the dishwasher, the reversed hookup on the washer, the MIA roofer who is needed not needed needed to do the vents, or any of the rest of this "I'm gonna run away and be a hermit"  exercise in frustration.

So, we'll continue with diversionary tactics.

Yesterday, Eddie, Margaret and I took a lovely walk in Echo Heights, a forested area in nearby Chemainus. Echo Heights has been the subject of a great deal of controversy between developers, the municipal government, and the local citizens.  I've been hearing about it ever since I moved here, but had not hiked in the 52 acre forest myself.  Margaret, familiar with its trails, suggested we go together.


Thanks for joining us - let's go back again soon!

I’m not going to write about the renovations.  I don’t want to talk about it.  Let’s just say if Allie had opposable thumbs she’d be posting a picture of me looking like her (see post below) , with the same darn caption.

So even though some of you are expecting a report on week two of the Great Canadian Kitchen Reno, and we're almost at the end of week three, I shall use diversionary tactics to help you (and me) forget all about it.

Instead I will tell you about  the amazing array of wildlife I have seen in the past couple of weeks.   Perhaps I'm seeing more wildlife because, in our attempts to avoid the summer heat which arrived with a vengeance,  Eddie and I walk earlier  (sometimes as early as 5:30 AM) and later (sometimes as late as midnight), when it is cooler for us and quieter for them.  But starting about two weeks ago, I began seeing wildlife EVERYWHERE.

One evening just around sunset as we wandered the back lanes, we came across a juvenile raccoon.  He popped out of the bushes right in front of us, and let us know in no uncertain terms that we weren't welcome there.  I didn't even stop to take his picture - we turned around and went the other direction.  A neighbour recently saw a very large adult raccoon in my carport, but this was the first I've seen since moving to Crofton.

Minutes later, standing on the corner chatting with another dog walker, we both glanced up the road in time to see an otter rapidly running across one of the main streets, far from the creek or ocean (for Croftonites reading this, he moved from the empty lot near Galletos across Joan Ave to the old Anglican church property).  Again, no photo,

And the next morning, on an early sunrise walk, we saw deer.  That's not unusual in the Cowichan Valley, but the sheer number I saw that day was out of the ordinary.  Seven just on my two kilometer loop of the beach - a mom and two fawn, another doe by herself, a juvenile male, a doe and single fawn .  I did capture two of them with the camera, though none of the little fawns. 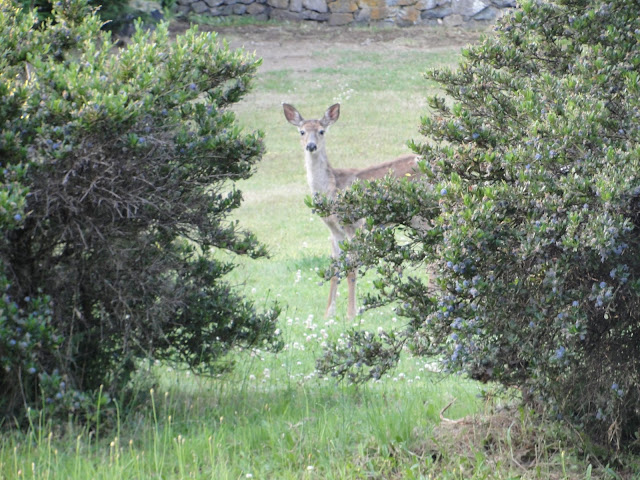 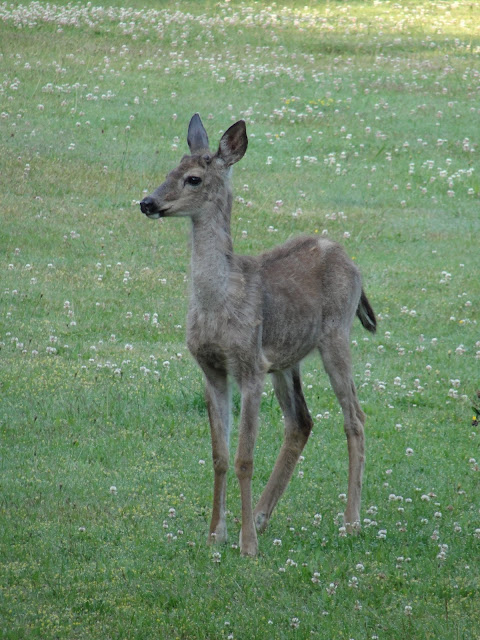 A couple of hours later, on the short drive to Chemainus, I saw seven more, in ones, twos and threes.  And on the way to Duncan, I saw a fawn so tiny I first thought it was a whippet running through the field.  As it came closer, I saw its vivid spots and realized that, despite its wee size, it was a very agile and sturdy little fawn.

The ospreys, eagles, herons and ravens are everywhere.  From my house I watched an osprey harrassing the eagle's nest near the ferry terminal;  on the beach I watch eagles young and old searching for lunch. 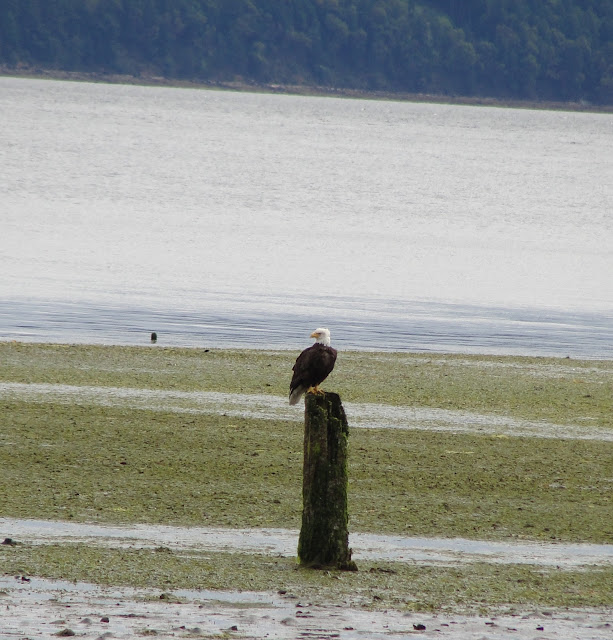 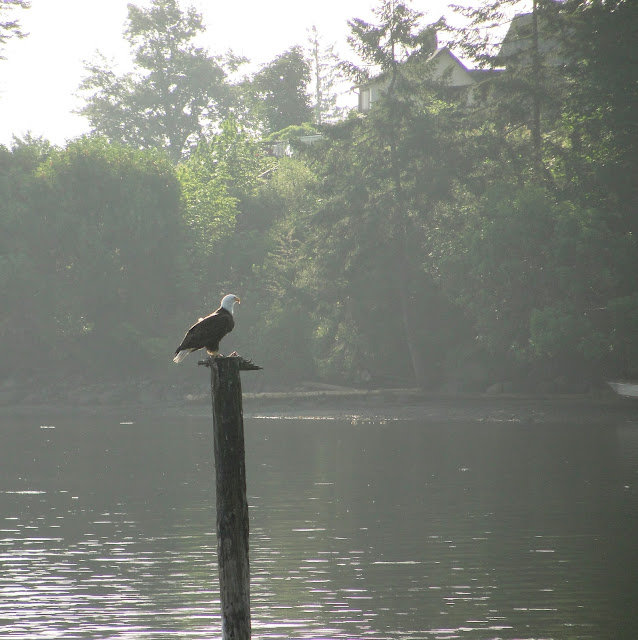 One early morning, I saw something flipping around offshore - too large to be a seal.  A camper with binoculars identified it as as sea lion.  We often hear their barking from Shoal Island, but seldom see them closer in.

And yesterday, as Liz and I walked the dogs along the beach at the foot of Osborne Bay Park, we saw a similar flipping and breaching and splashing - but with a marked white flash appearing on each leap.  At first I wondered if it was a small Orca as many whales have been spotted recently in the waters around the island and across to the lower mainland.  But it seemed too small for that.  Its pointy snout and flashy white suggest what we were seeing was a dolphin.  He (or she) put on quite a thrilling show for us.  Unfortunately, I had forgotten my camera.

Our backlane walks have spotted many homeless and homed-but-outdoor cats, far more than usual.  One evening at dusk, I counted twenty-three within a six block radius.  This guy is one of my favourites for his tortie looks and sad, sad face.  He often comes to look in my window or nap under my car.

And right in my own backyard, the drama of baby birds about to fly is again keeping me mesmerized.  This is hatch number three this year, from the little birdhouse that hangs under the eaves of my garden shed.  I spent several hours today with the big camera on tripod snapping photos of mom and dad sparrow feeding the offspring.


From the size, noise,  and activity level today, I'd guess they will be ready to leave the nest tomorrow. (I just went out to check on them and thought they might have fled this evening... but a little tap on the bottom of the house and one baby beak pokes over the rim of the hole. "Whose there?  Go away, we're sleeping! Our mama said not to open the door to strangers!"

An eventful week  or two - the wildlife outdoors are so much more industrious and entertaining than the wild life going on in my kitchen.
Posted by Jean at 9:47 PM 5 comments: