Hi Everyone!  This is Maggie.  You may have noticed that for the first time in 12 years, my mama didn't post a Happy Canada Day blog, with photos and nice words that praise the beauty of this country.  My mama's been struggling with some stuff lately and just didn't have the energy to go through photos or write words.
So here's me.  Mama took this photo of me in 2018.  I'm a bit more grey now.  So is she. But at least I look patriotic.  I hope you had a Happy Canada Day. 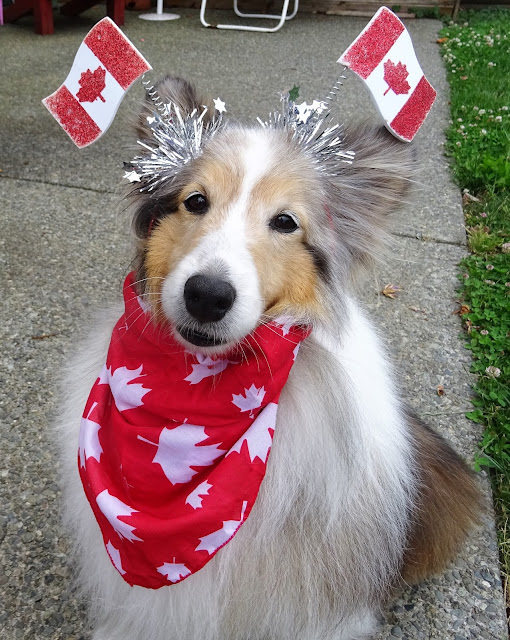 The creative juices aren't flowing.  I have eagle photos and eagle stories but that spark of inspiration that enables me to pull them together has been elusive.  I'm not a disciplined writer who sits at the desk at the same time each day and pounds out words on the keyboard.  More often, I wake up with the words just flowing from me, or I'm out walking and the story swirls around in my head.  I just can't write on demand.  So, one day, you will get to read the story and see the photos of the eagles - or many stories of many eagles - but as I haven't blogged for awhile I shall just post some photos of our wander through Craig Bay Heritage Park from a couple of days ago.

We love this park because it is quiet, level, alongside the ocean, lightly forested, grassy, with pockets of wildflowers that change weekly.  And it is never, ever busy. In fact, many times we don't see a soul.  Peaceful is the singular word that describes it.

And, as it will likely be Father's Day by the time you see this, Happy Father's Day to all the dads out there.  My own dad passed away nearly 45 years ago, and I miss him still.  This is one of my favourite photos of him, doing one of the things we enjoyed doing together when I was just a kid:

A few photos from last week

The days seem to be getting away from me - as is my energy - and by evening I'm too tired to blog.  So here's just a few of my favourite photos from this past week, lest you think I've forgotten you.

Happy Gotcha Day, Maggie!  Five years ago today we signed the adoption papers at Langley Animal Protection Society (LAPS) and you and I became family. 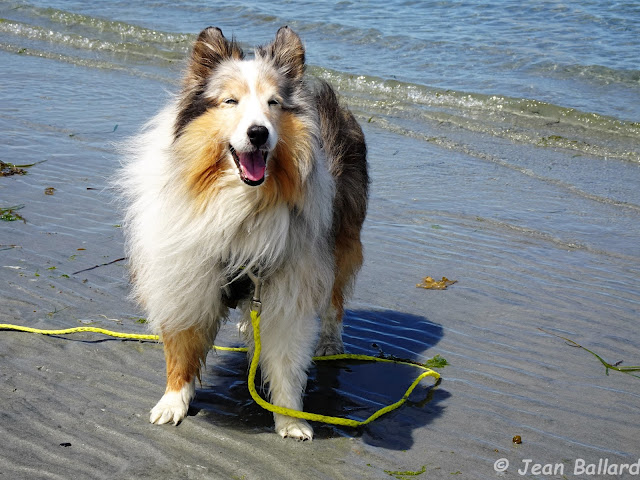 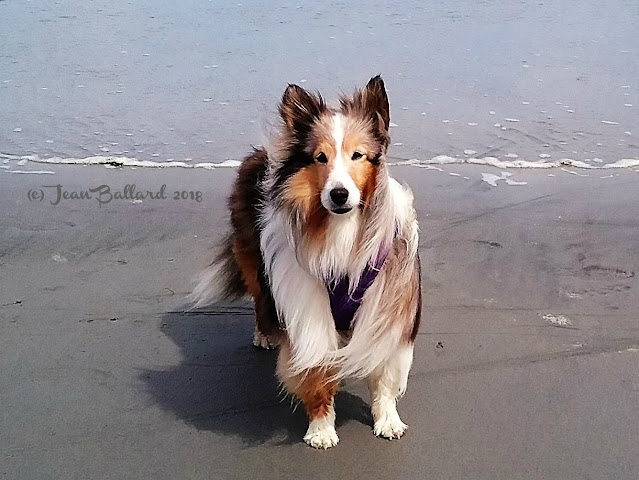 Checked out many parks, 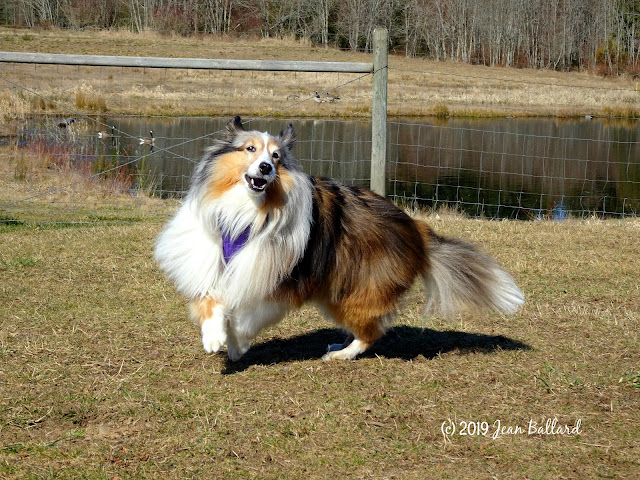 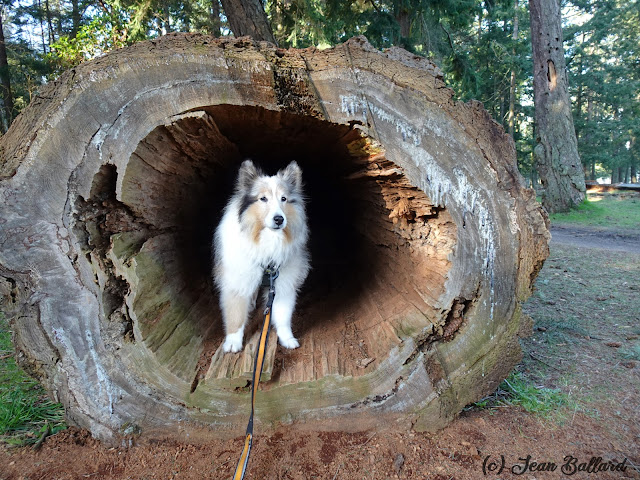 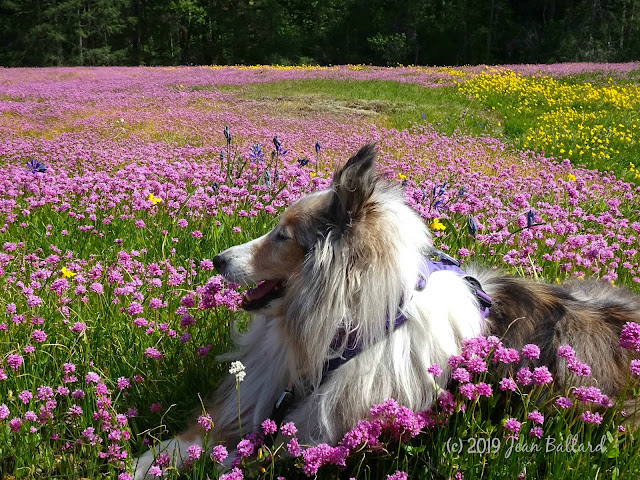 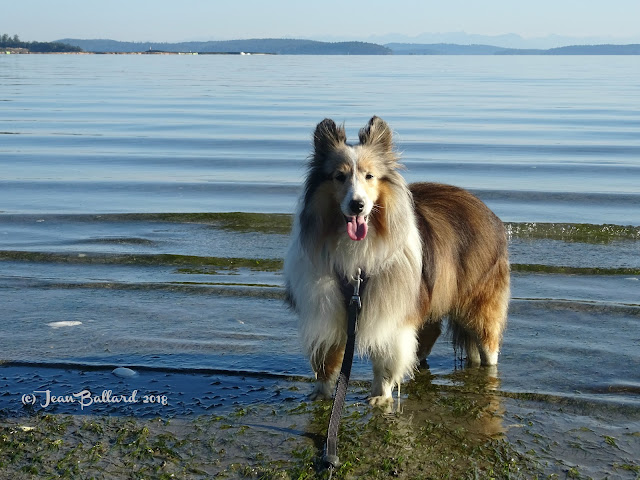 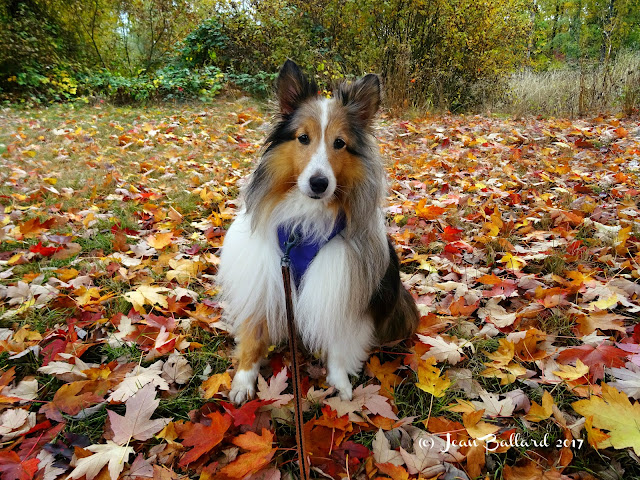 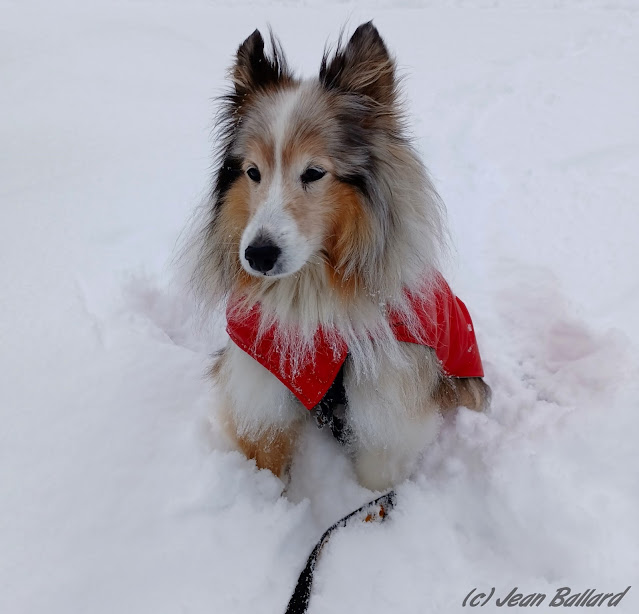 And enjoyed sunsets together. 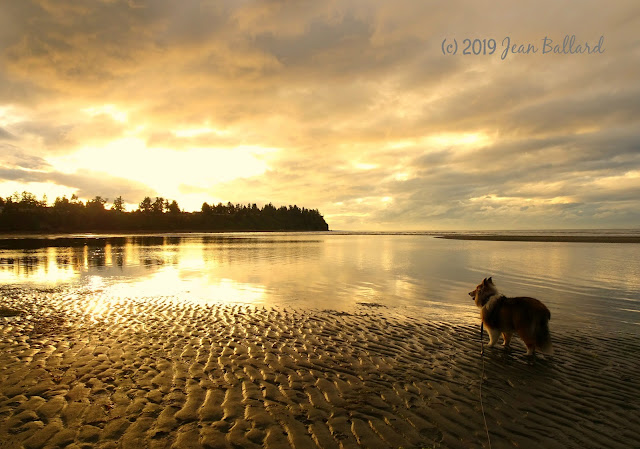 We're both growing old together.  You're no longer able to do hikes, but you sure enjoy being taken to parks and beaches. 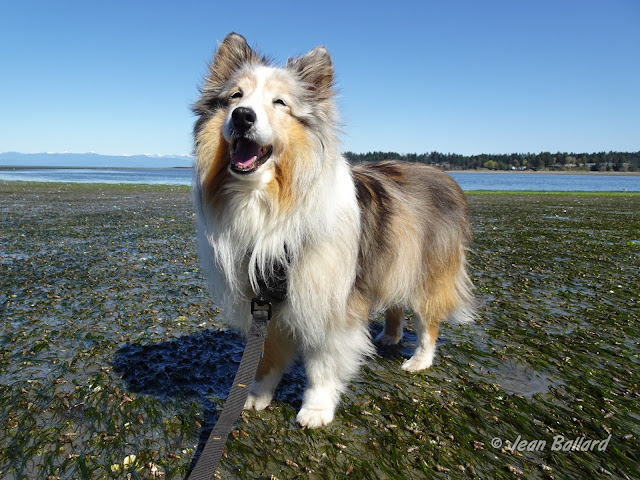 The stumps you climb are shorter and flatter now.  Come to think of it, so are my hikes! 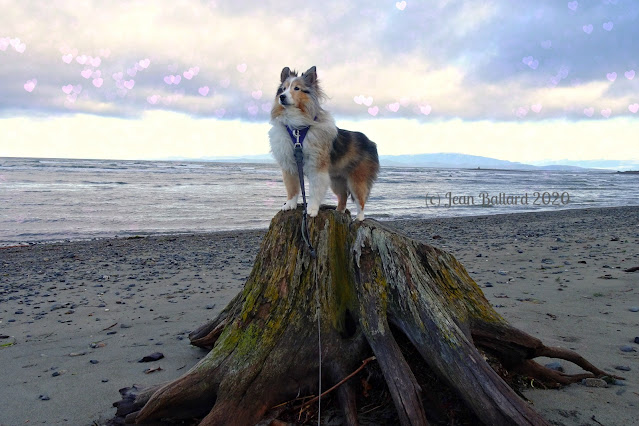 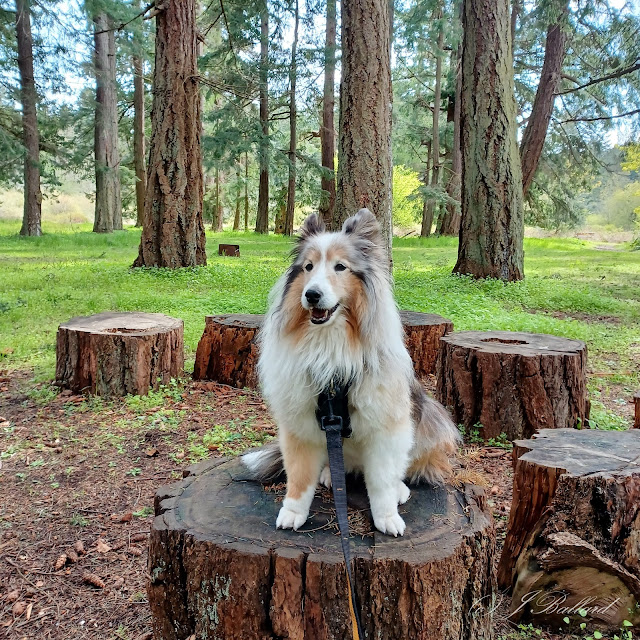 Your fur is whiter, like my hair, and you don't hear as well or see as well as you once did - but neither do I.

You strain my finances and sometimes my patience, but repay me a thousand-fold with love, laughter, companionship. 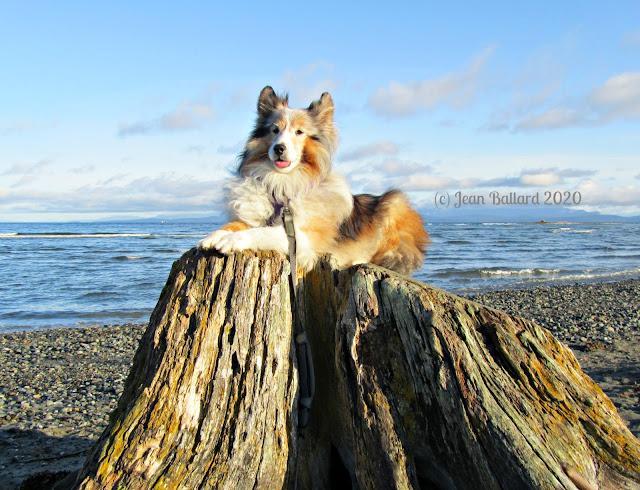 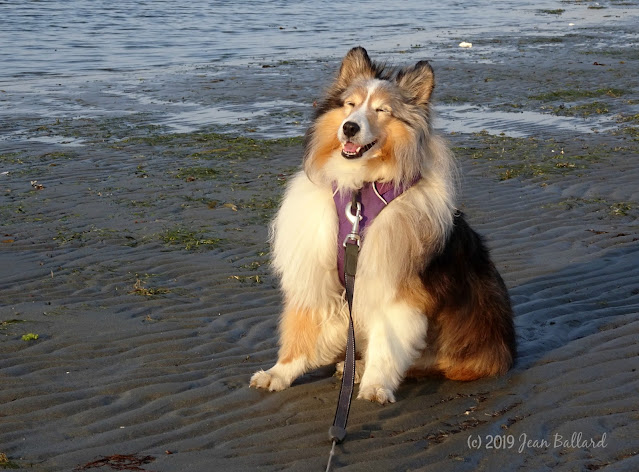 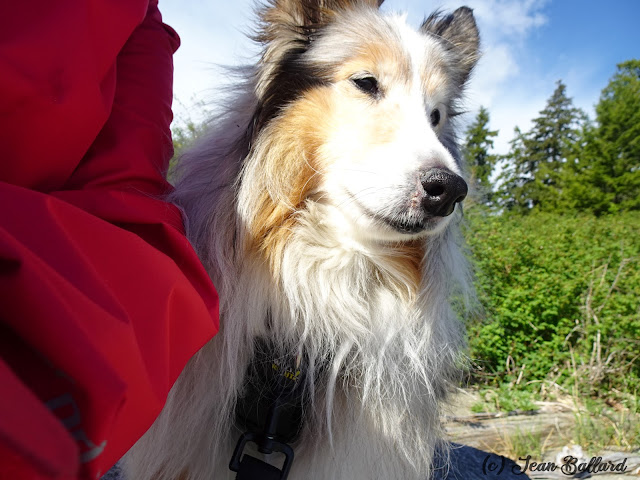 This is not an eagle 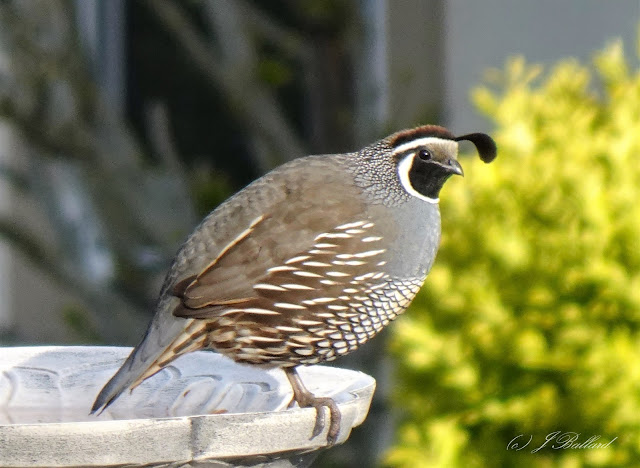 This was my 'thin slice of joy' today - a perky, inquisitive quail in our strata's garden, waiting to greet me when I opened my front door this morning.  Last year, I saw  many families of quail on my walks around the block - after seldom seeing them on the island.  There was another adult quail on the ground near this one, but due to the shrubbery I couldn't tell if they had any chicks with them. Soon, I expect, I will see quail once again scurrying across the roads, across the driveways and lawns, diving under shrubs with their many, many babes in tow.  I love their jaunty little feather caps on their heads, bobbing along. So much fun!

Just a few more photos so you know I'm still here.  Maggie and I went away for a few days with a couple of friends last week, so I'm still editing the eagle photos.  This week the drywall is being put into the ensuite and bedroom that were damaged by a broken pipe, and Mags can't be in the house when they are working so I may not get much done all week.  These photos are some of the 'teasers' I put on facebook recently, but I still have lots more to do including some that tell a story or two.  Enjoy!

Hi everyone! It's me, Maggie.  I have a pretty nice Mama, so today I told her she could take the day off from editing about a zillion eagle photos, and I'd take her to the park instead.

I would have made breakfast for her, since it is Mama's Day, but I'm not allowed to use the stove.  Or open the fridge. Or order delivery on the phone.  Okay, I'm not only 'not allowed' but as I don't have opposable thumbs those things are pretty tricky for a sheltie.  I'm smart, but not THAT smart!

So, I suggested we have a nice walk in the park.  Craig Bay Heritage Park, to be exact.  It's always quiet, and there's grassy paths, and a bit of beach, and lovely views, and now that it is spring there are also flowers and lotsa birds.  So I even suggested she bring her camera along.  And I promised I wouldn't hog the lens.

I think she had a nice time.  These are some of the photos she took.  I dunno the names of all the flowers but I know a couple of them.  Mama probably knows the others but she's asleep already 'cause I wore her right out!

We saw birds too - some heron and something flying in the sky: 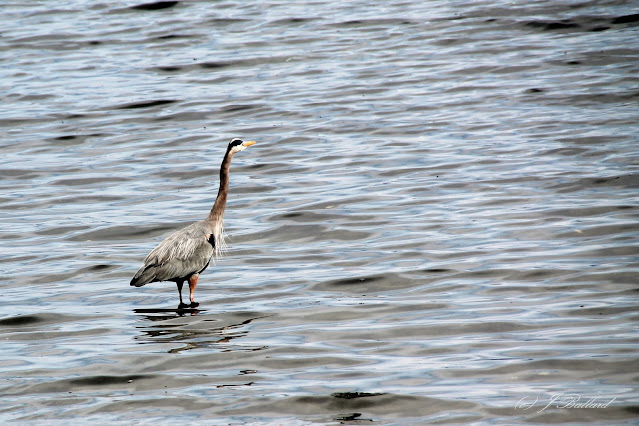 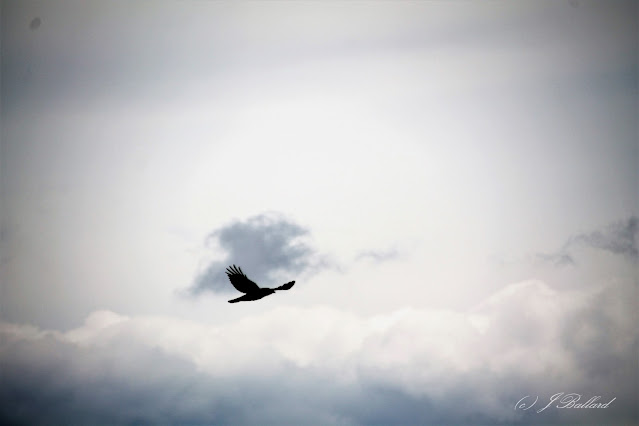 And guess what else we saw?  A bunny!  But he runned away when I shouted hi to him.  Mama said I should use my indoor voice when we see other critters. I forgots. 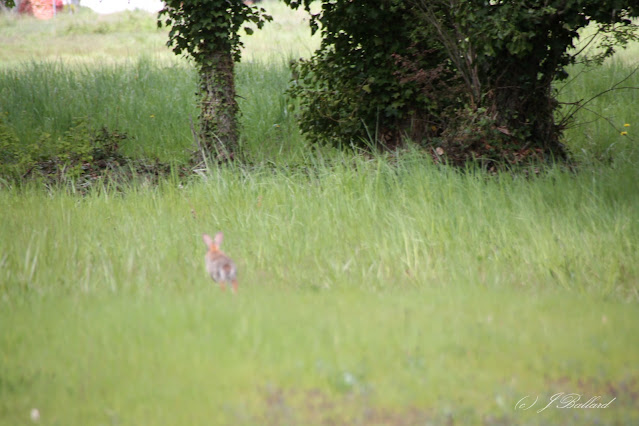 We saw a little humming bird on the end of a bare branch.  He is always there, every time we go. But he is real because he moves his head to look at us sometimes.  I think he just likes to watch the ocean and listen to the waves - just like my Mama does. 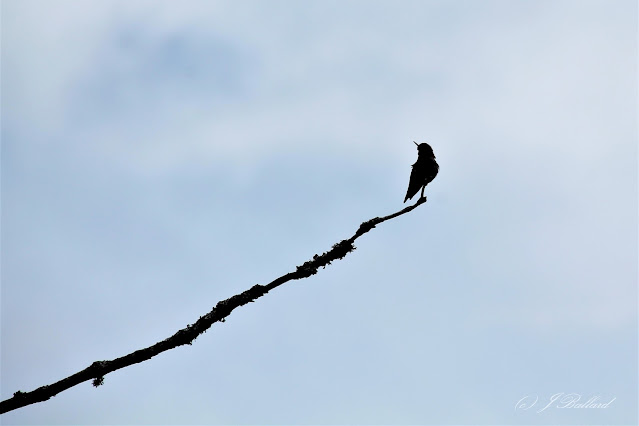 I kinda forgot I said I wouldn't hog the lens,  and when Mama was trying to photograph a flower I kinda got in the way - hehehehehe! 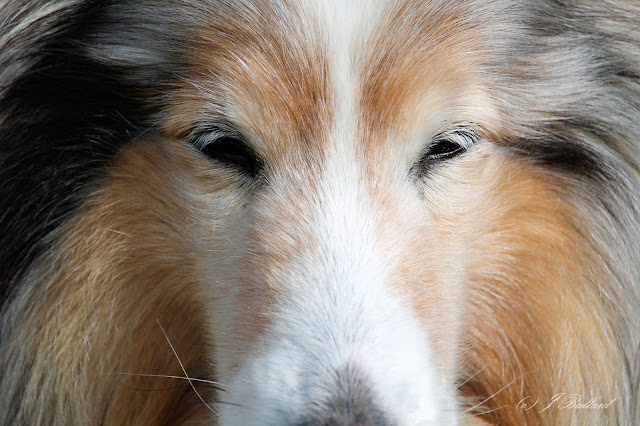 This was the flower she was trying to get before my snout got in the way: 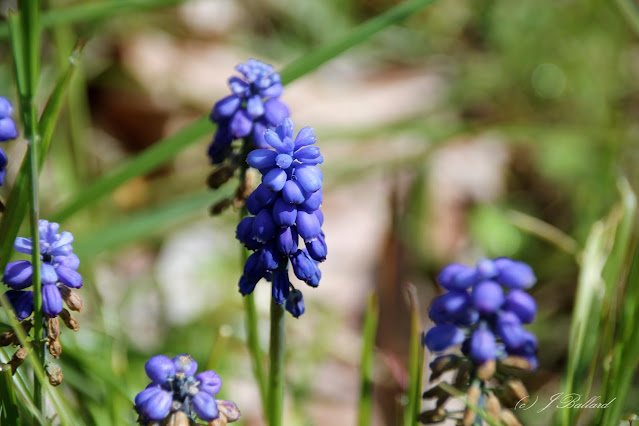 So I think Mama had a pretty nice day.  Maybe tomorrow she'll get back to editing the kazillion eagle photos she took on Friday.  Don't tell her, but I'll give you a sneak peak at one of them: 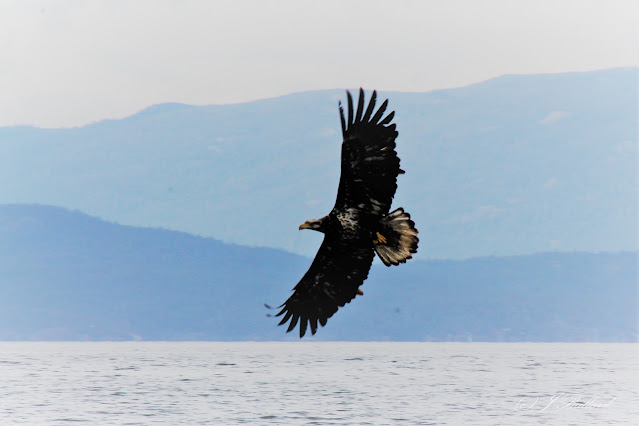 I hope you gave your Mama a nice Mother's Day too, or if she's gone to the Rainbow Bridge, I hope you thought of her today.

I love my Mama.  Happy Mother's Day to all the mamas out there!