Mitzi takes over the blog

Hi! My Mama Jean is very lazy busy these days, mostly wiv the garden, though she’s s’posed to be helping with the SPCA garage sale stuff too and sometimes she does but mostly she is in the garden.  She is not growing veggies this year except lots of tomatoes because those is her favourite and she can eat them till the cows come home – though that must be forever because we don’t have no cows.

Well maybe we do.  Cuz right now there is something that smells like cow poop in our back yard.  It is in the new dirt mama bought.  Who buys dirt?  All ya gotta do is go out for a hike and there is lots of dirt.  She always tells Eddie he brings home half the dirt in the forest.

But she bought dirt.  She says she bought four yards of dirt.  I dunno why she’d do that because we only haz ONE yard.  Well, two if you count the Back yard and the Front yard.  Oh, three – the Side Yard.  So she bought one yard too many of dirt.

Anyway she bought four yards of dirt and it has lots of steer poop in it and I LOVE to walk in it and sniff it and dig in it and eat it.  My mama keeps asking – WHO MADE THESE LITTLE PAW PRINTS ALL OVER THE NEW RAISED GARDEN BEDS? 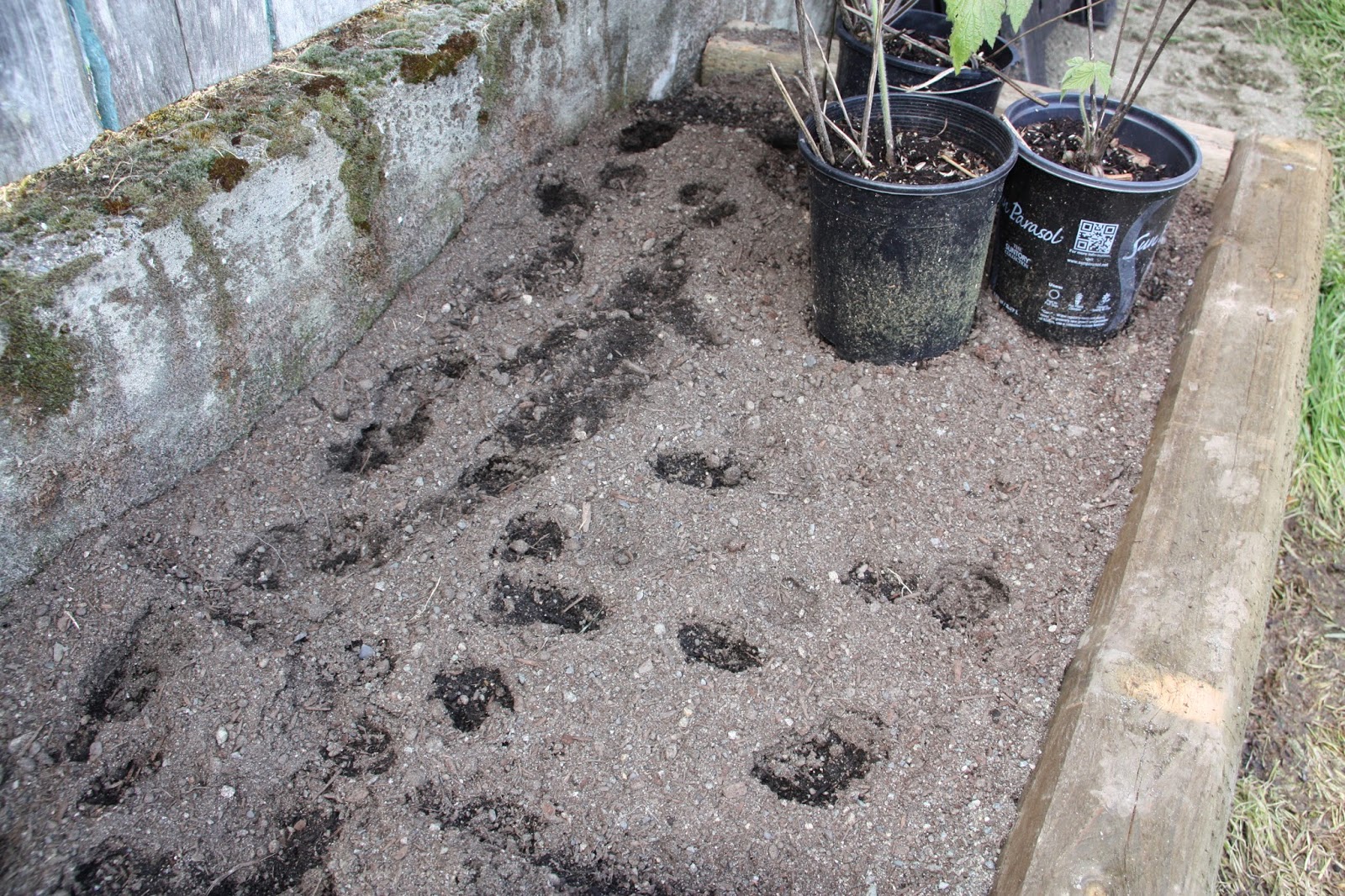 And I looks the other way and sez “Not me!”

Well that’s enough about dirt.  She also bought two yards of sand.  SAND!  We lives a block from the beach fer gosh sakes!  Who needs to buy sand?  She says Shiloh brings home half the beach with her on her morning walks.

And then she bought logs.  LOGS!  There’s forests of logs around here.  But no, she bought 32 logs to make a bunch of raised beds but I don’t know why they are called beds cuz they don’t look nothing like beds to me and not half as comfy either!  And she planted a long row of trees in one (with a little help from someone she called a hired hand, but he’s got two hands and two feets and a head and all the rest of the people body parts, not just a hand – hired or not. ) The hedge looks like this:

And in between she watched the birdies.  There are babies in the birdie house that hangs on the shed again.  Last week mama painted the shed and built a new door.

She waz very careful when painting near the bird house and didn’t disturb the mama and papa birds at all.  Then the day after she finished, the birdies hatched. Now she has put the work near the shed on hold.  That’s why there’s some logs and stuff piled near the shed door in that last picture.  Mama will finish that new garden and move the junk when the birdies has flown.  She also has to put the gutter on the shed. Can’t do THAT wiv baby birdies in there.  They has to be fed all the time.  Even more than me!

The babies haven’t stuck their heads out yet, but very soon they will.  Meanwhile, Mama Jean was also watching these goldfinches at the seed feeder: 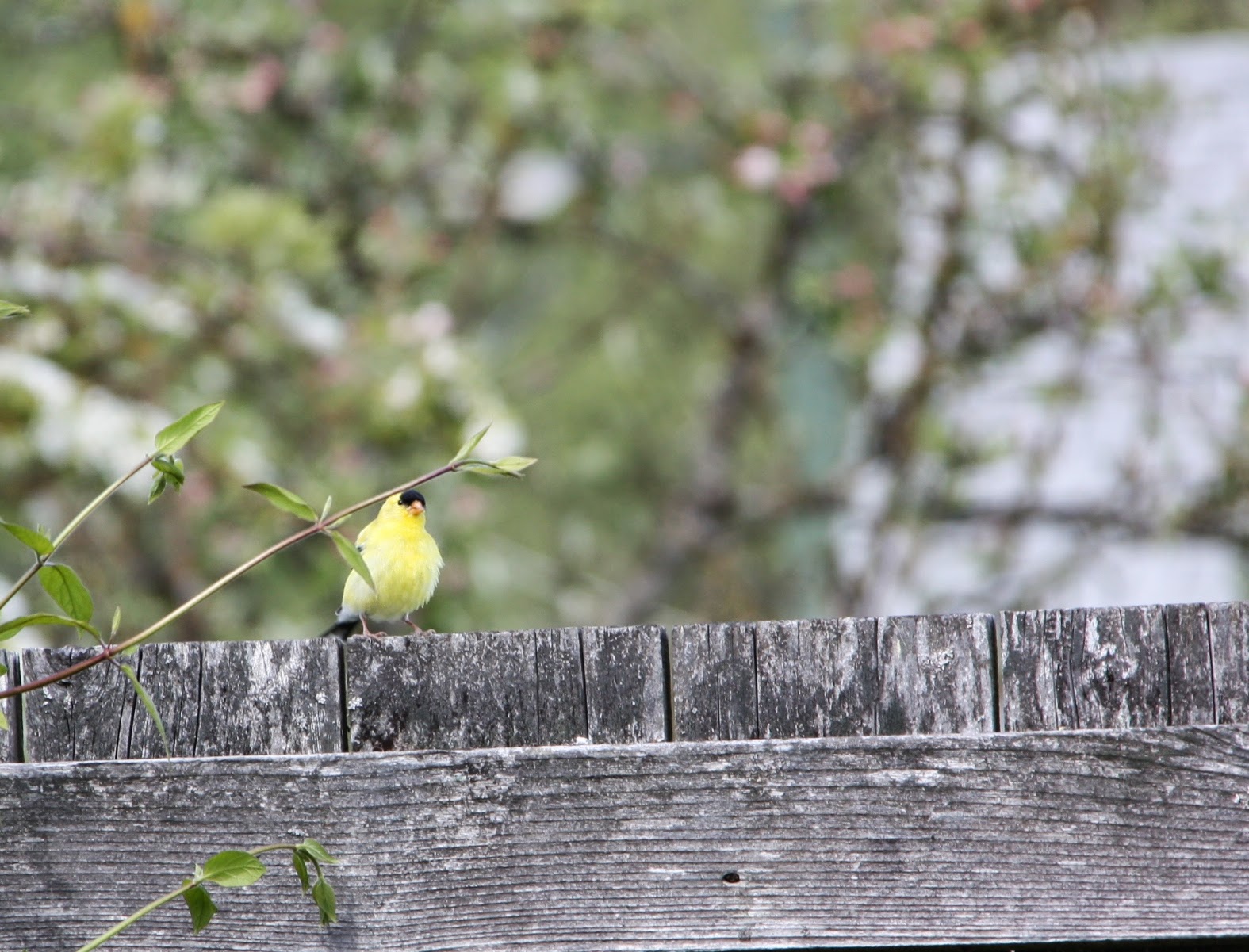 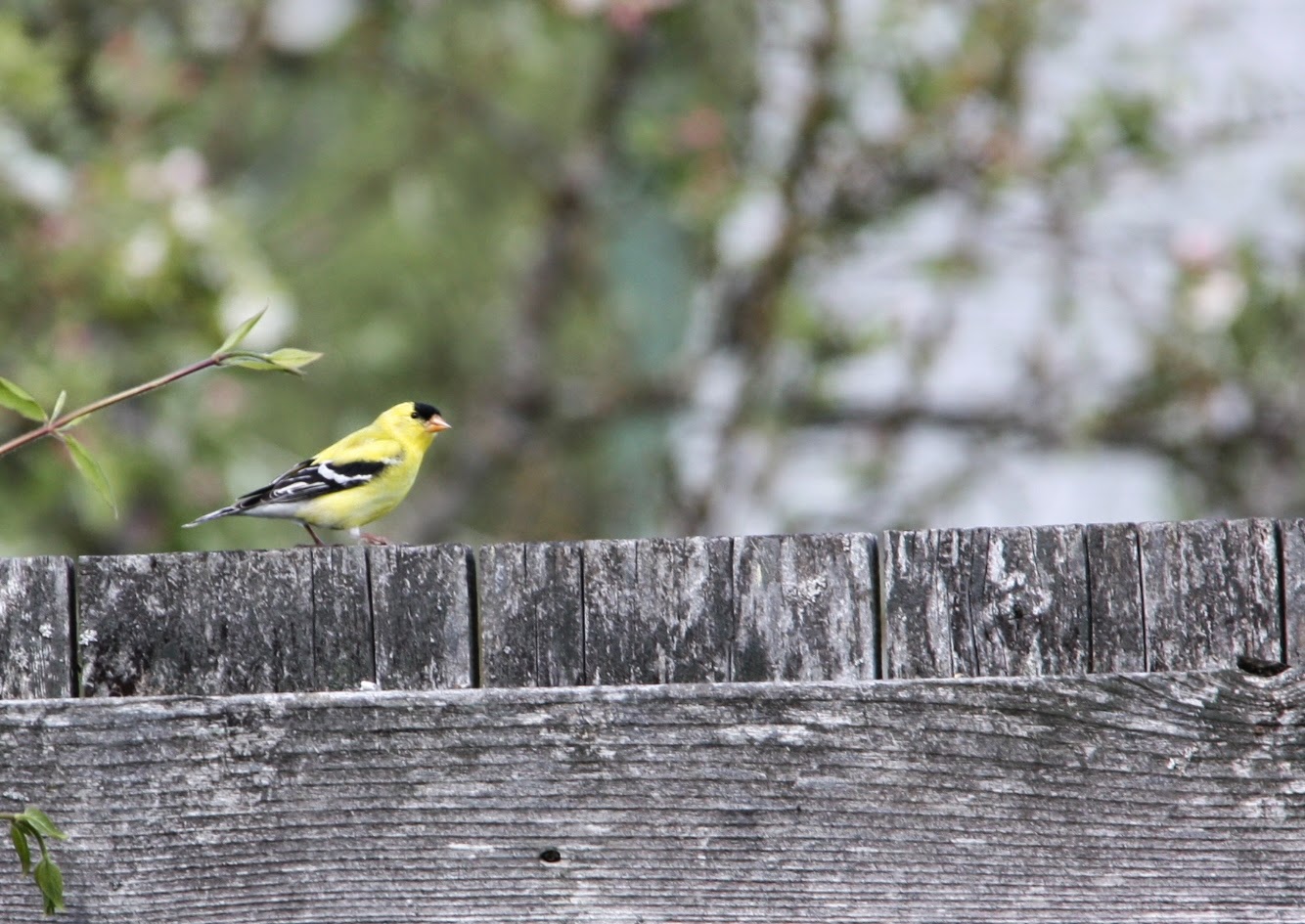 But she still found time to take us fer walks sometimes.  These are some pictures of Eddie and Keaghan on a walk a few days ago,


And….Ta Da!  I went on a hike to Swallowfield wiv Mama Jean and Auntie Bonnie and Keaghan (he’s a BIIIIG dog) and Eddie. It waz a gorgeous sunny day when we headed out.  We walked and walked and I tested all the puddles that were left from the previous day’s rain.   Then my little legs got tired and I wanted to head home but Keaghan and Eddie didn’t so Mama put me in her backpack!  Like this:

She says she used to do this with another dog she had before I came to live with her – Princess Belle.  This is a picture of her in the same backpack: 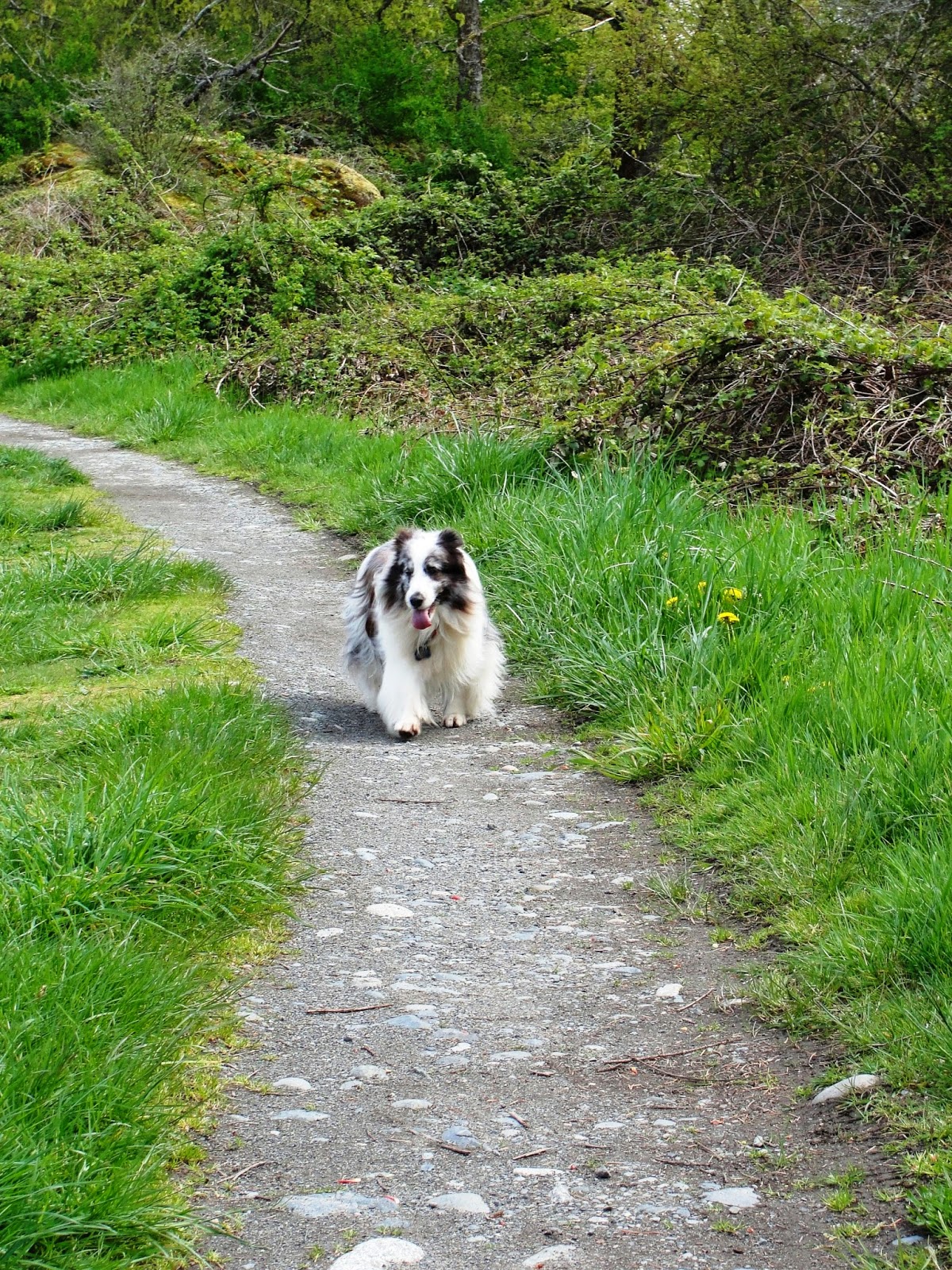 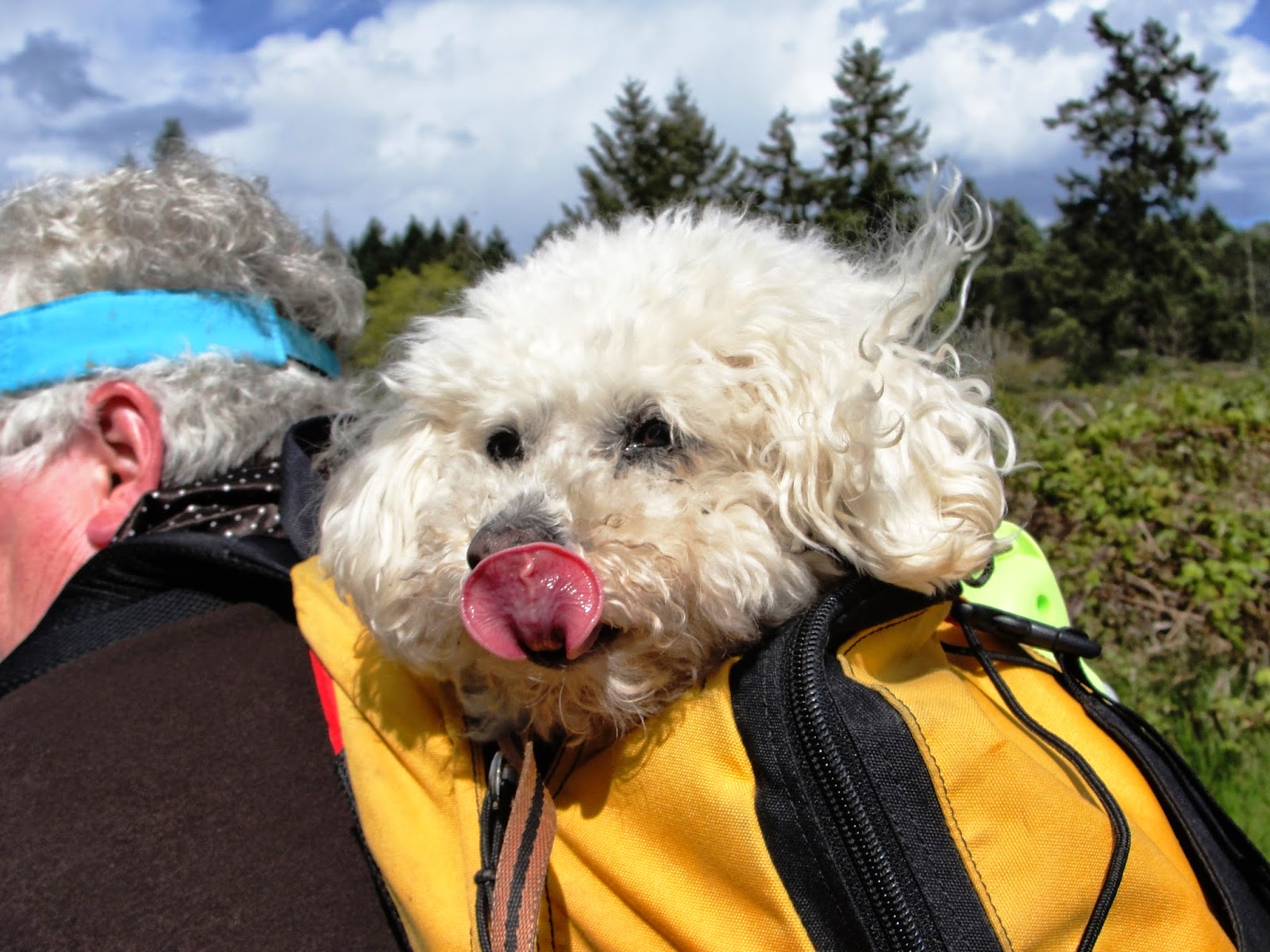 I quite liked it in the backpack.  I was ever so still and just watched the world go by.  I almost felled asleep.  I nearly missed seeing these pretty flowers – they are called Fawn Lilies, Mama Jean thinks. 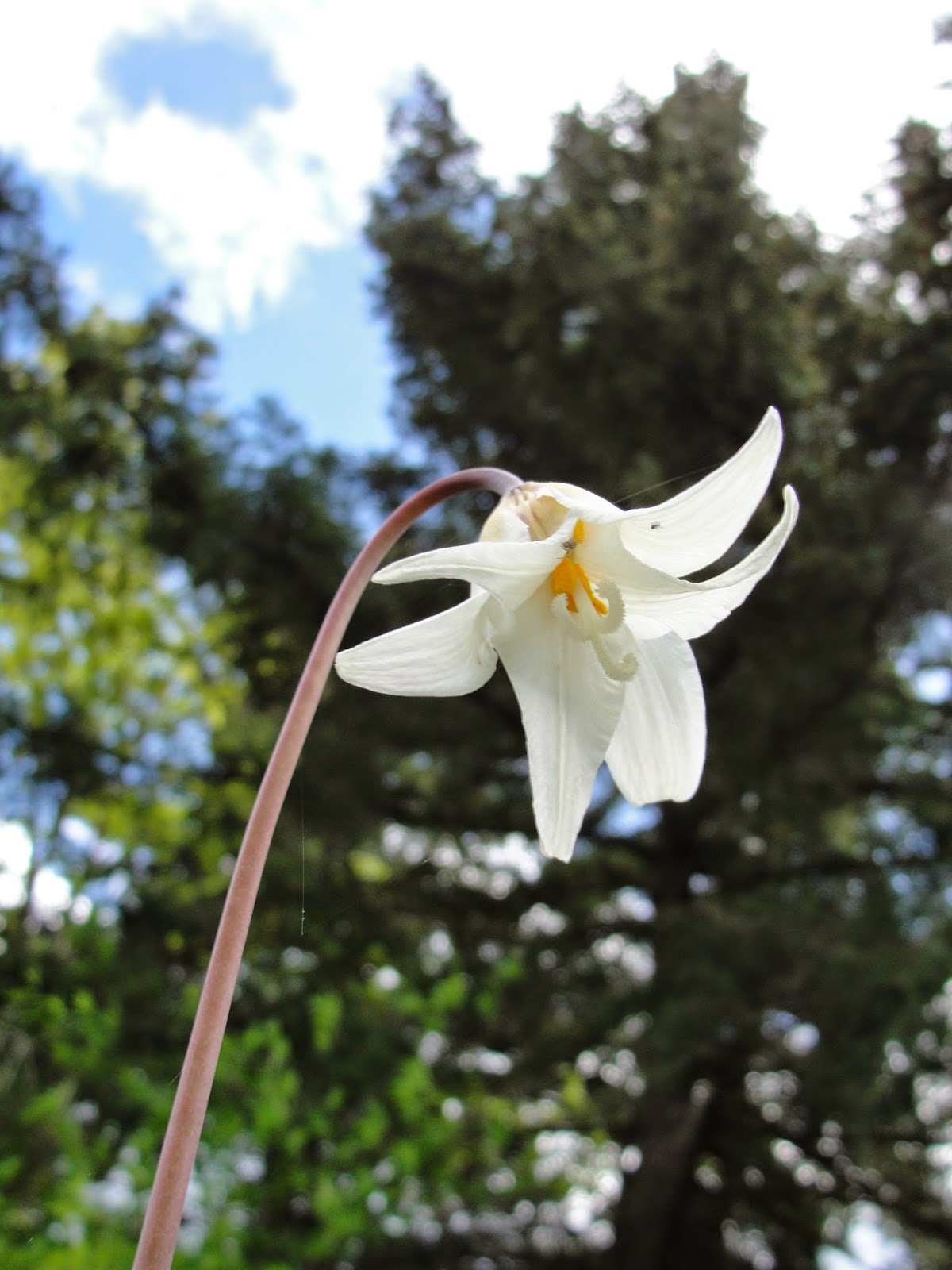 When we got to the river, Mama and Auntie Bonnie were talking about whether to go across the estuary. I waz happy where we was.  It was very bootiful at the river. 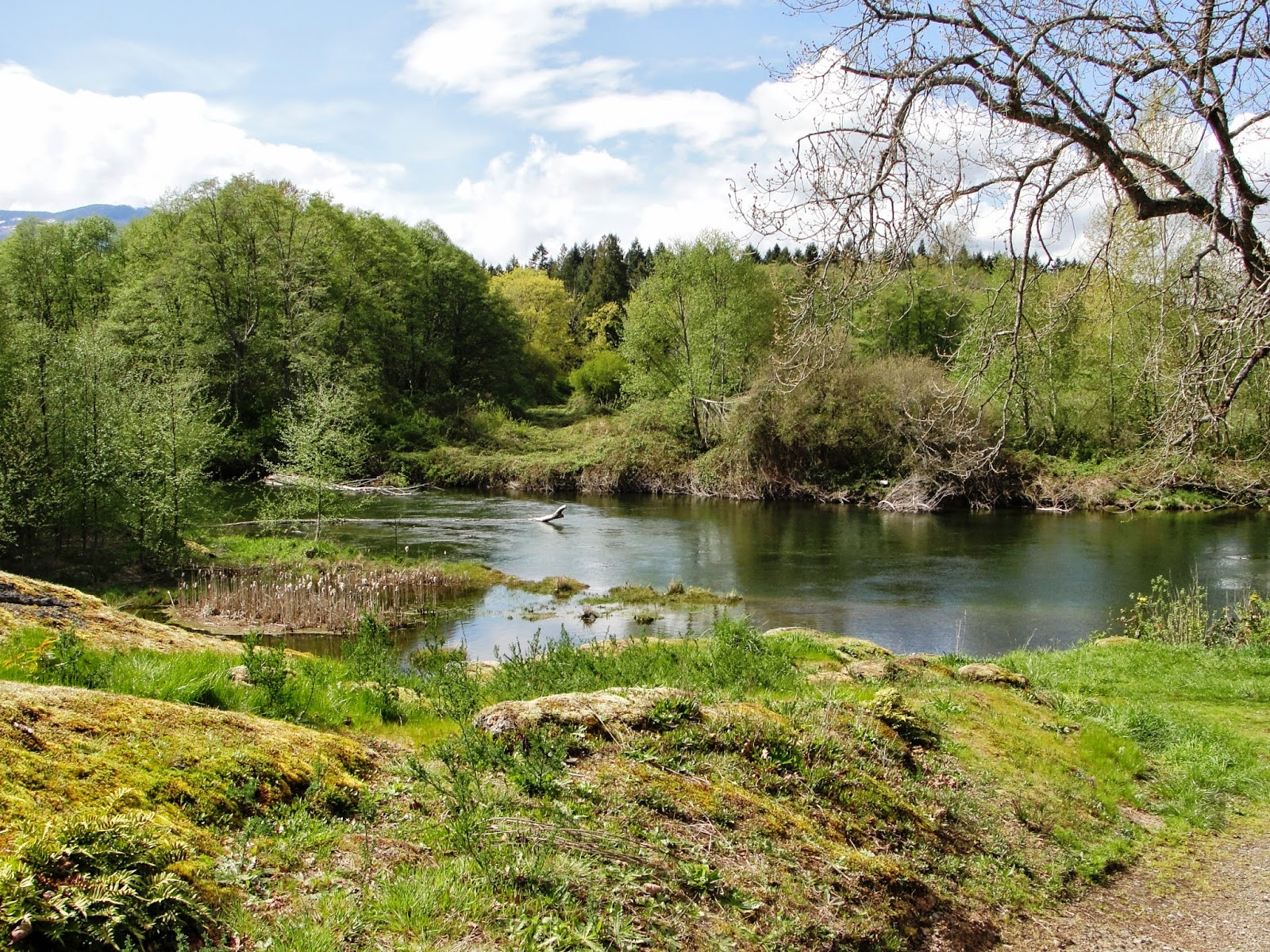 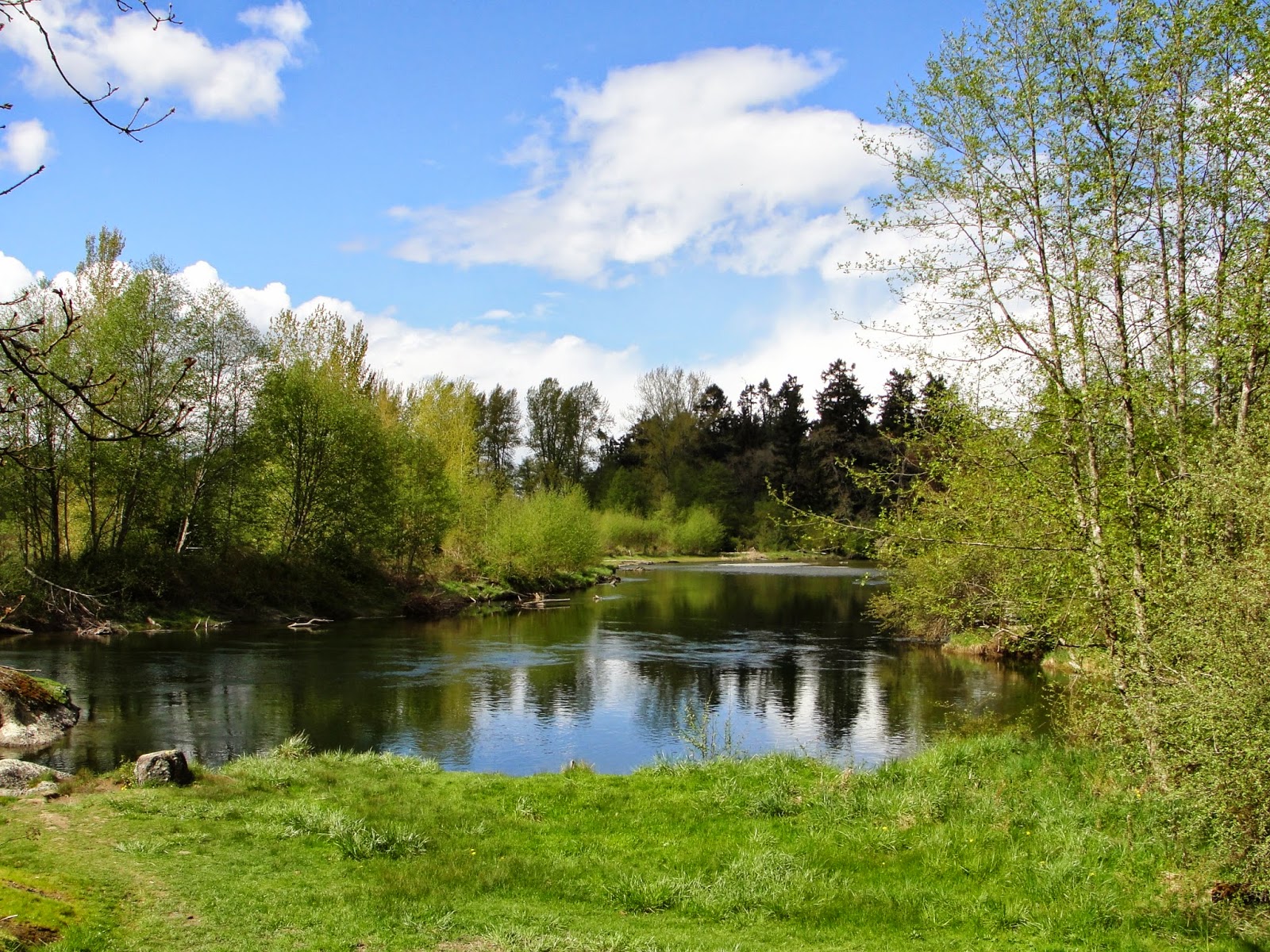 Then some big  dark clouds rolled in and a HUGE wind came up.  You can see Keaghan’s furs blowing like crazy here: 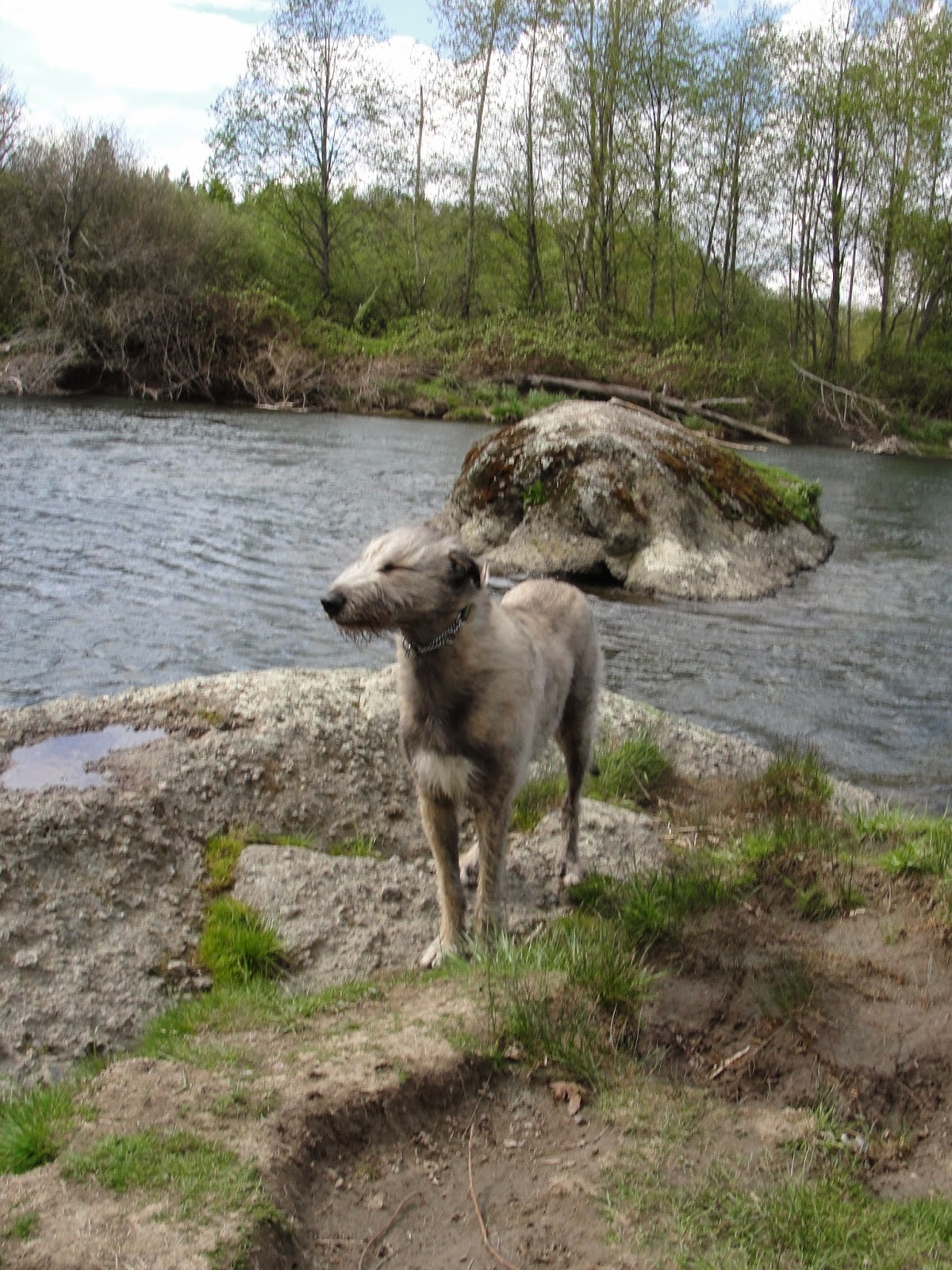 I’m lower to the ground so my furs didn’t blow as much:

Mama Jean was afraid it might thunder and Excitable Eddie is terrified of thunder and would bolt if he got thundered on, so he had to go back on leash and then he fussed and moaned and groaned and pulled and balked and was a brat.  (He wears his leash around town, but he knows he can go off leash when we is on hikes.  I wears my leash all the time because an eagle might swoop down and carry me off.  Besides I don’t listen too good.).

Anyway, because of the changing weather, we all headed back home.  I walked all the way this time, right up there wiv mah Big Friend Keaghan.

In fact, I pulled mama all the way back to the car.   Mama sez I walk sooo fast when we turn to go home that I remind her of a cow heading for the barn.  There’s those cows again.  I haz no idea what she is talking about.

All I know is I is having fun times in the garden and on walks and being my own princessly little self.

Oh, and in case you were wondering, Mama guessed right about which of her Easter Hunt photo would make the front page.  In fact, it took nearly all the front page: 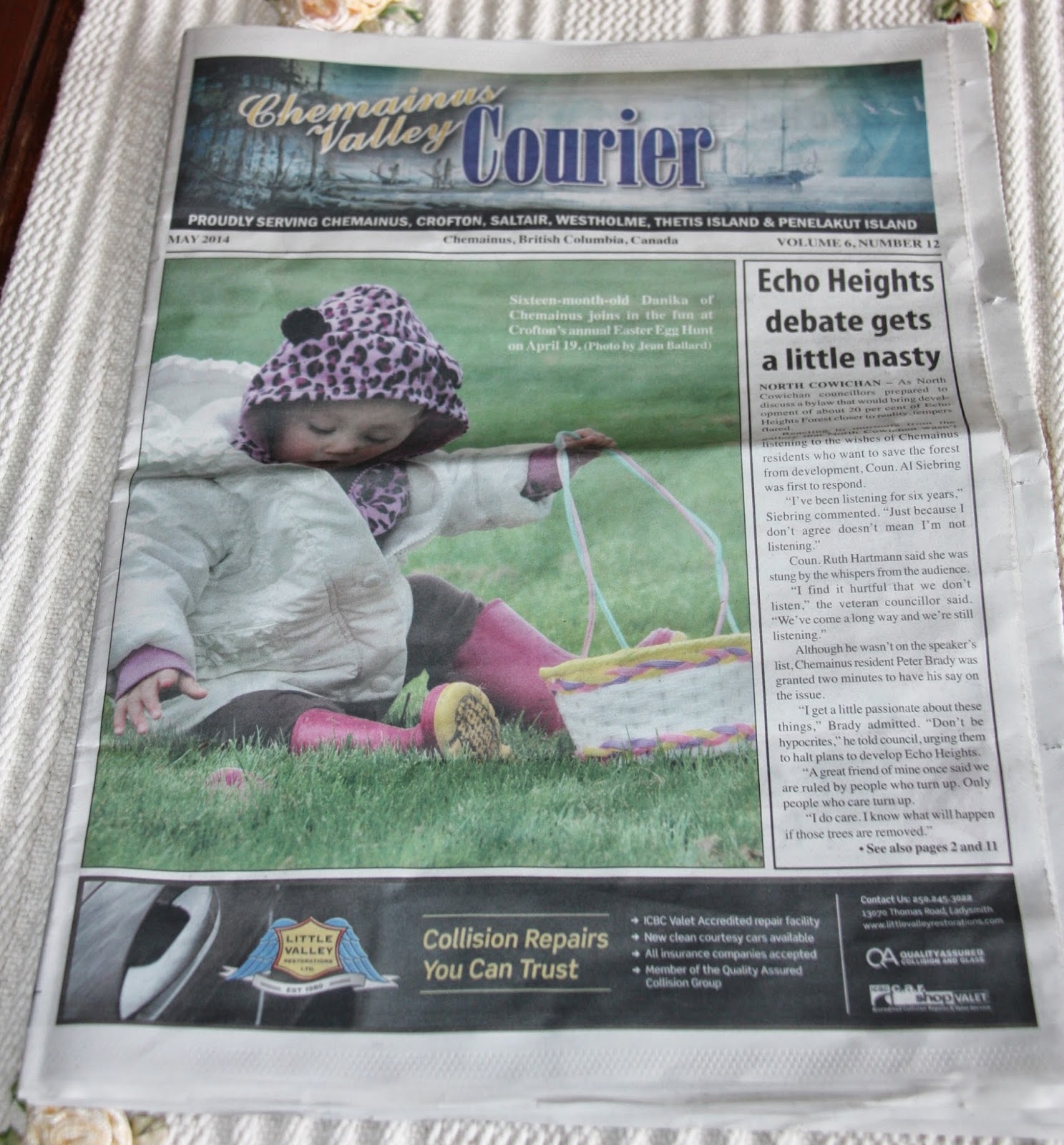 Easter Fun and a Photographer's Mecca 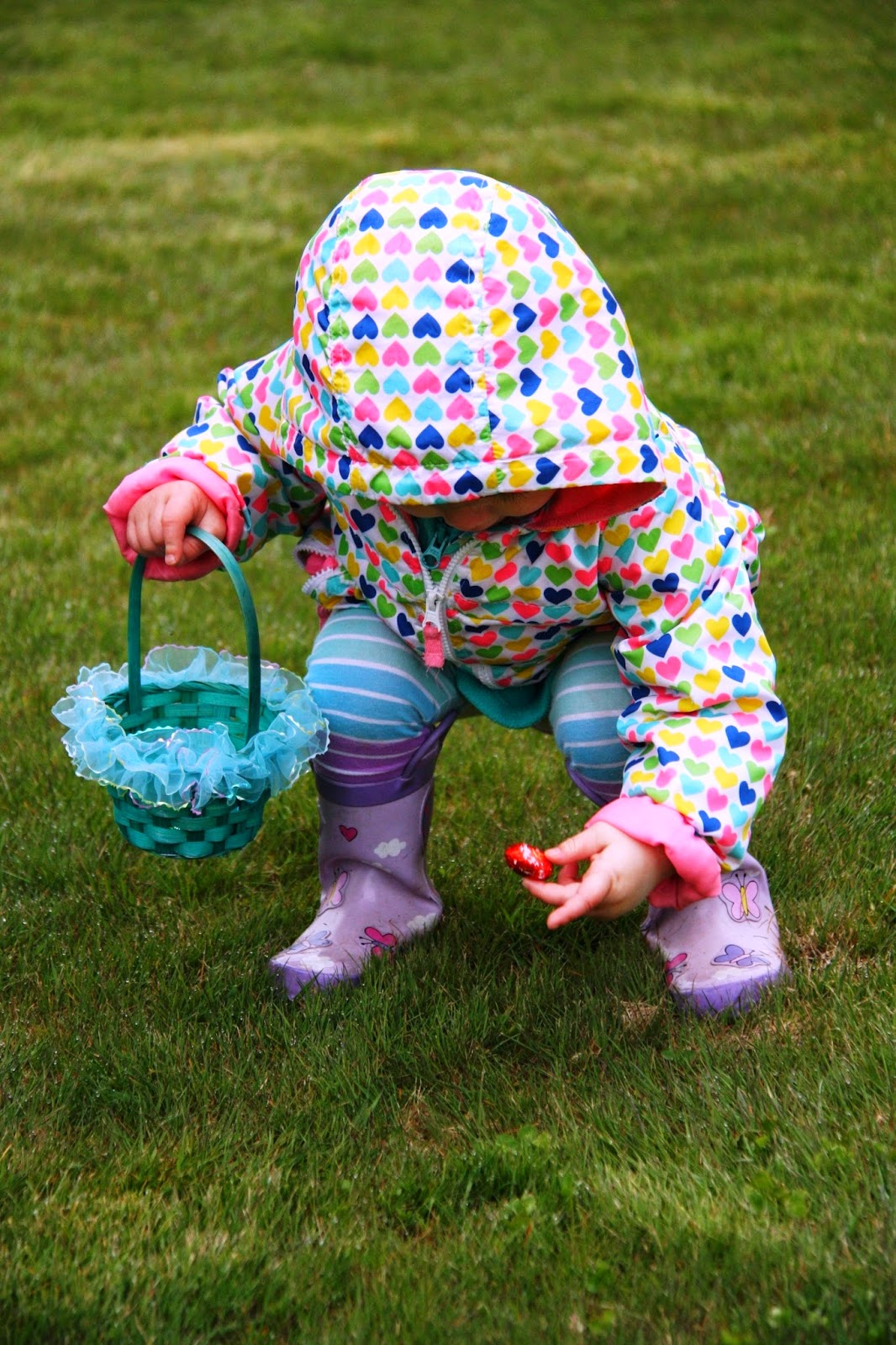 Last weekend I had the opportunity to photograph Crofton's Annual Easter Egg Hunt for the paper that carries the column Liz Forbes and I write.  I love our little community's annual events - the fishing derby, the Christmas parade and carol singing, the movies in the park, the Easter egg hunt.  Aside from the laughter, meeting new people, chatting with old friends, and chowing down on tasty refreshments, I have a chance to photograph one of my favourite subjects - kids having fun.

In the course of three hours, I took nearly seven hundred photos. My co-columnist Liz had the task for following along behind me getting  names, children's ages, and parental permissions. Since our deadline for publication had actually been two days before the event and the publisher was holding a front page spot for a photo, I spent a long night looking through all those shots for the final six or seven to send him.

So many activities!  So much to choose from! Scavenger hunts and guessing games, blowing bubbles and skipping rope,   face painting, stuffy tosses, music and dance and games with Daisy the Cow and Farmer Vicki, women in Easter bonnets, children with balloons, toddlers and grandmas,  the Easter Bunny, the egg hunt, and over three hundred happy faces.

I think this was my favourite series - I loved watching this little girl so carefully pick up a little egg and drop it in her basket: 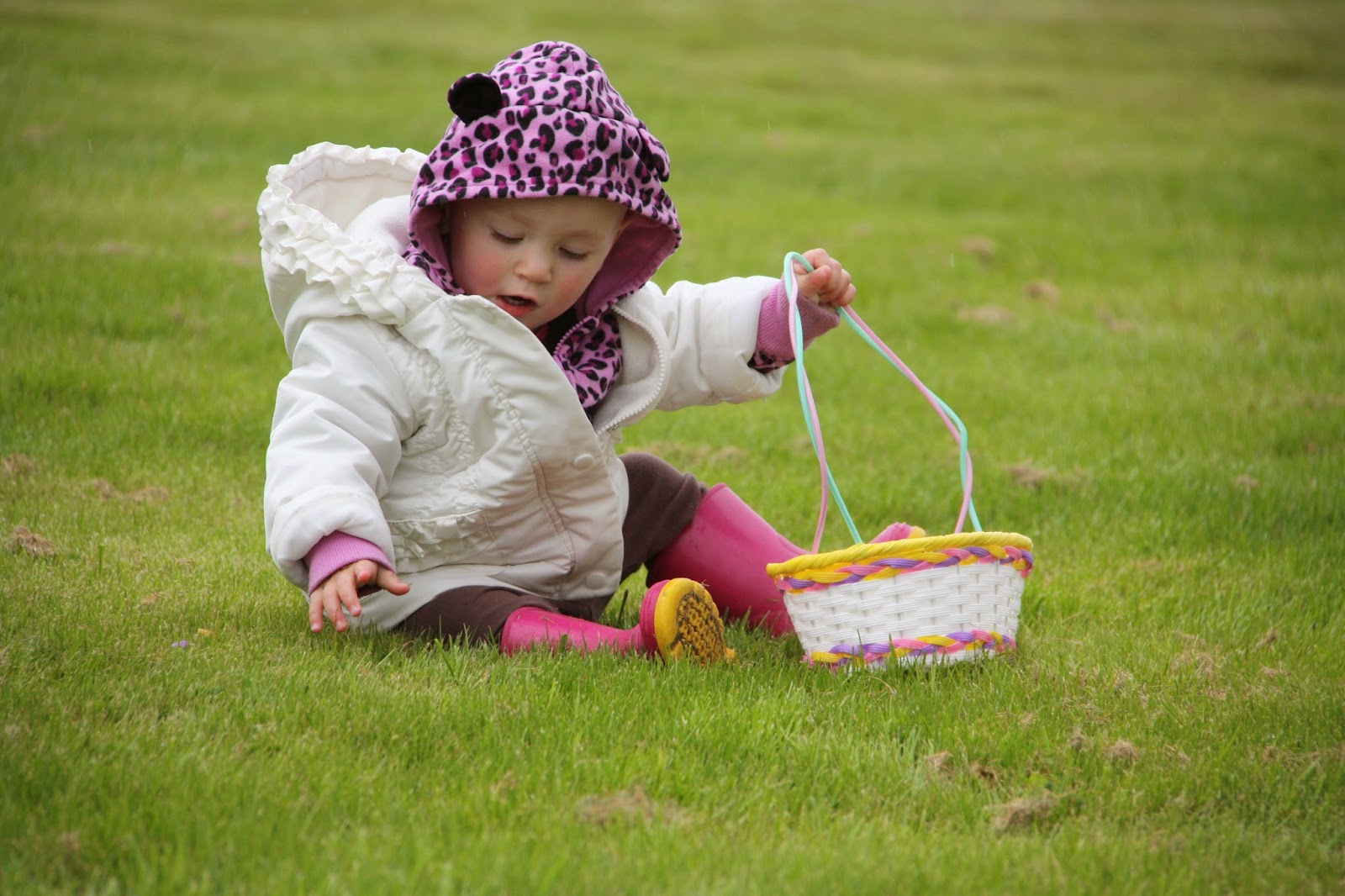 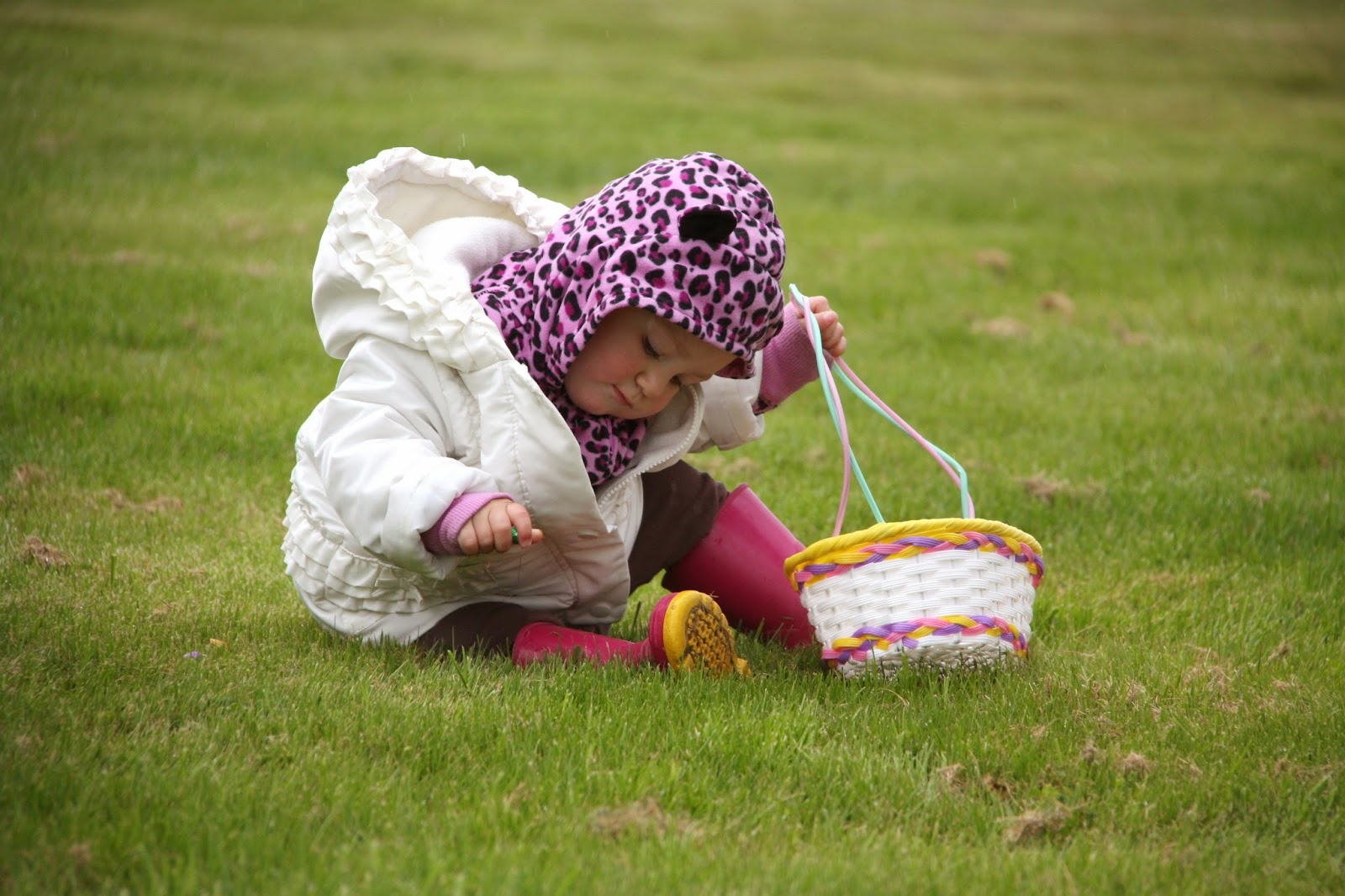 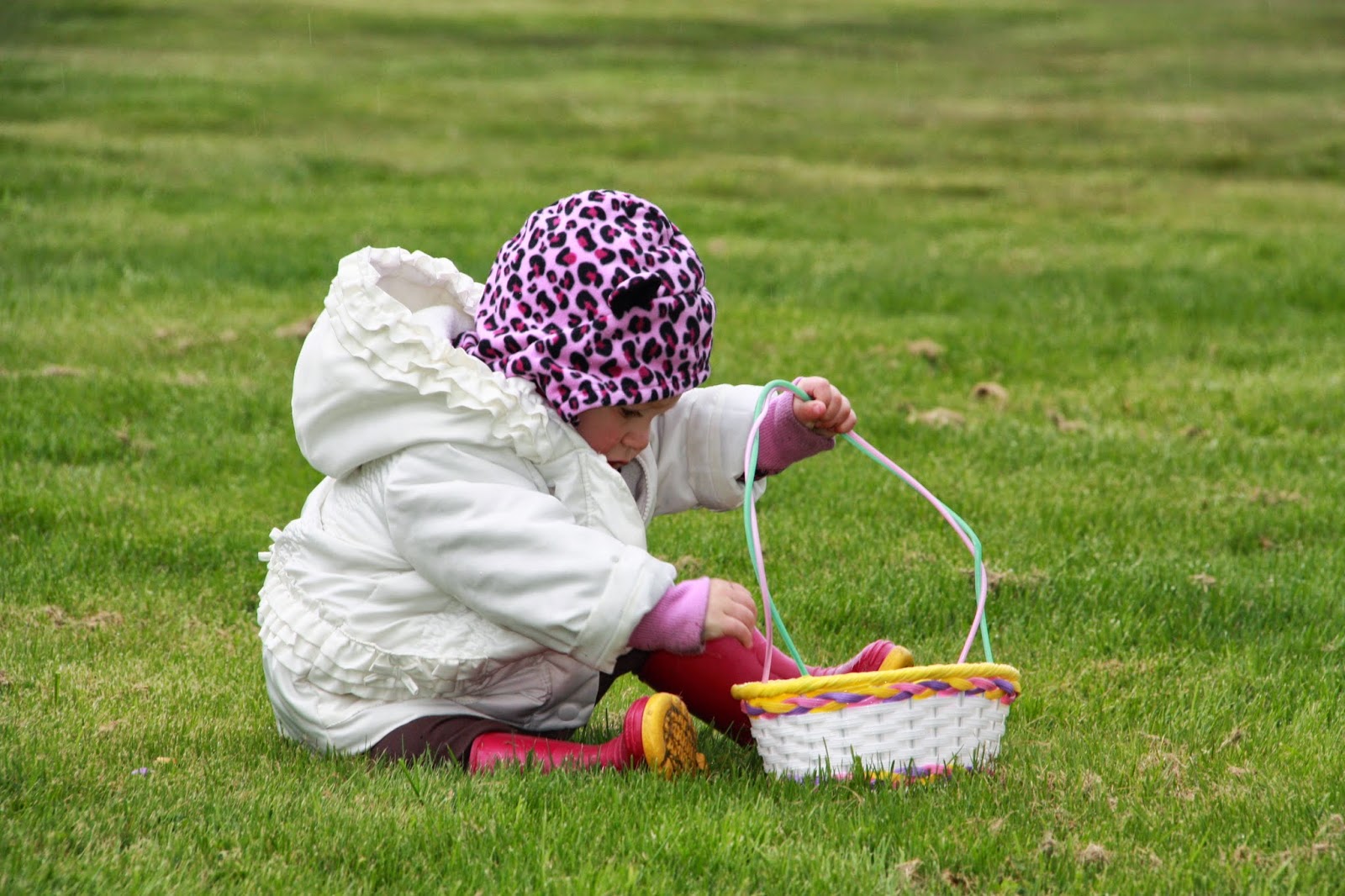 Liz and I had a hard time choosing the final submissions for the paper, but eventually narrowed it down to these:

But I'm betting this one will make front page: