A couple of days ago, I dumped a large mug of coffee right into my primary computer (a laptop) and it is fried.  Fortunately, I have another laptop that my nephew gave me a while back and which I've been using for some bits and pieces to save space on my very-full-and-on-its-last-legs primary unit.  Unfortunately, I don't have the same programs on it and I'm a little lost. Also unfortunately, I lost all my email addresses and a considerable number of photos, and my external hard drive automatic backup on my primary computer hasn't been working since January.  Shoot, I knew I should have taken care of this soon.  Oh well, mustn't cry over spilled coffee.  At least I am now forced to upgrade, back up, seek professional help.

With the big SPCA garage sale this weekend and my next four days completely booked with that, I won't be doing anything about finding a techy to try to retrieve the coffee-laden hard drive nor to set up this one with my photo editing and writing programs until later next week.  Time for a little vacation from blogging.

Meanwhile, see you at the Cowichan Exhibition grounds for the biggest and best garage sale the island has ever seen!

Shiloh is feeling a little sorry for herself as she developed a hematoma on her ear (likely related to her neurological issues which affect that side of her head and cause her to frantically bash her head along the floor or furniture on occasion).  Yesterday we had to go to the vet's to have it aspirated. Hopefully the ear will now heal itself and no further more invasive procedures will be needed.  She goes back for a recheck and some blood work on Tuesday.

I reminded her that the vet is her friend, but she didn't believe me.  She says friends don't stick needles in you.  She likes her other friends better, like the ones that came to her birthday party earlier this month:


And she likes human friends who visit her and give her cuddles instead of needles.  Recently, our Sheltie Rescue friend Joanne and her daughter Julie, who fostered Shiloh for the first month of her new life last fall, came for a visit.  They were happy to see how healthy she was (this was before the hematoma appeared!), and Shiloh was happy to see them.  I think she remembered them and certainly didn't hesitate to snuggle with Julie and give her little sheltie kisses.  It was a great opportunity for me to get some shots of Shiloh's beautiful face without her walking right into the camera:


There's one more friend in Shiloh's life too:

It's a Shiloh mini-me!  I couldn't resist getting it for her for her birthday as it looks so much like her except for the completely white nose.  Her mini-me is very well behaved and quiet, and best of all will never develop a hematoma.

I CANNOT SAY THIS LOUDLY ENOUGH......


DON'T LEAVE A DOG IN YOUR CAR ON A HOT DAY! 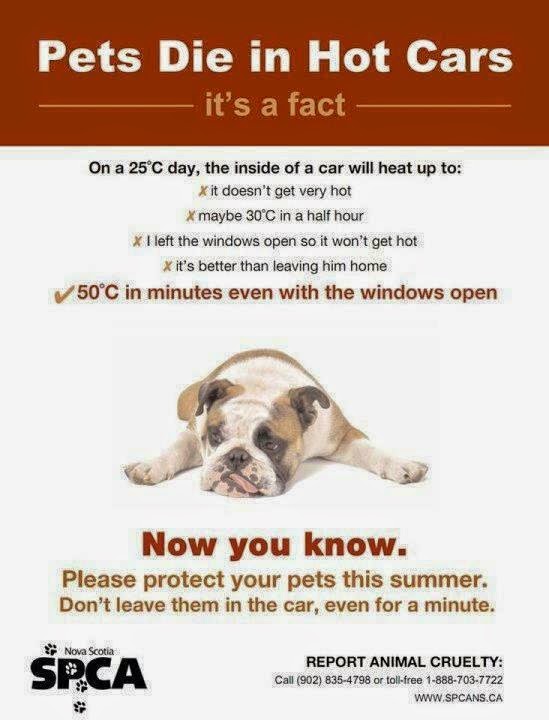 Today, I was saddened, angered, outraged to hear that the six dogs that were purportedly stolen from a Langley dogwalker's truck last week were not stolen at all,  but died of heat exhaustion when the dogwalker left them locked in her truck on a hot day.

There is NO excuse for this.  This was NOT "merely an accident".  This was a person who makes her living taking care of dogs, and could not possibly have been ignorant of the fact that vehicles heat up quickly and dogs die quickly when the outside temperature is warm or hot.

There is a message here for every dog owner, every dog sitter, every person who has ever looked after a dog for even a short while.  Don't leave the dog in a car on a hot - or even moderately warm - day.  Not while you run into the store for a few things, not while you go to the public washroom, not while you drop in on a friend 'for just a moment'.  Once spring arrives, and until winter returns, leave the dog at home!  You know what?  They'd rather be alive than go for a fatal car ride.

Perhaps part of my outraged reaction is due to my own experience in 2010 when a professional dog caregiver, one who worked with dogs every day, killed my own dog Oliver through her absolutely unacceptable behaviour.  The circumstances were different, but the result the same - my dog died of salt water poisoning after the person entrusted with his care let my sight impaired, deaf, sixteen year old dog with canine cognitive disorder off leash on the beach and then turned her back.  I never thought to tell her what I thought was obvious - especially when the beach was not an off leash beach.

And so there is a second message here:  know your petwalker or petsitter. Grill them, quiz them, check references, and grill them some more on their canine knowledge, their practices, their philosophy regarding dog care and safety.  And put in writing the things that are not acceptable to you - whether it is letting your dog off leash, taking them in the car without being crated or seatbelted, leaving them unattended in the back yard or in the car, opening the door without leashing the dog first, or whatever.   I learned the hard way not to take common sense for granted, not to assume someone who works with dogs would keep my dog safe. My dog paid with his life for that ignorance, as did the six Langley dogs.

The dogwalker who killed those six dogs will never forget the lesson she learned when she chose to leave the dogs in the vehicle while she did who-knows-what.  I hope the petsitter who killed my Oliver will also never forget how she screwed up.  I know it changed my life:  my dogs' safety is now more important to me than any other aspect of their care.  They can miss a meal or two, miss a walk, miss my company - but when it comes to safety, there are no compromises because sometimes there are no second chances to get it right.

My heart goes out to the families who lost their best friends.  I know only too well the deep, deep pain and sense of betrayal.

I hope all my blog readers will keep their dogs safe this summer.  Leave them at home if you can't be with them every minute. Even when you can be with them, be aware of road temperature, beach temperature, dehydration, heat exhaustion,  water hazards.  Plan ahead to keep dogs safe in new surroundings while on vacation - dogs bolt and get lost when away from home.  Plan your strategy for safety in wilderness areas where bears might be encountered - angry bears can be right on Fido's tail as he runs right back to you. Carry a canine first aid kit.  Carry extra leashes, carry lots of water.  Get a canine life jacket if you boat.  Don't let your dog swallow too much seawater while playing his favourite game of swim-and-fetch.  Think safety, safety, safety. Please. 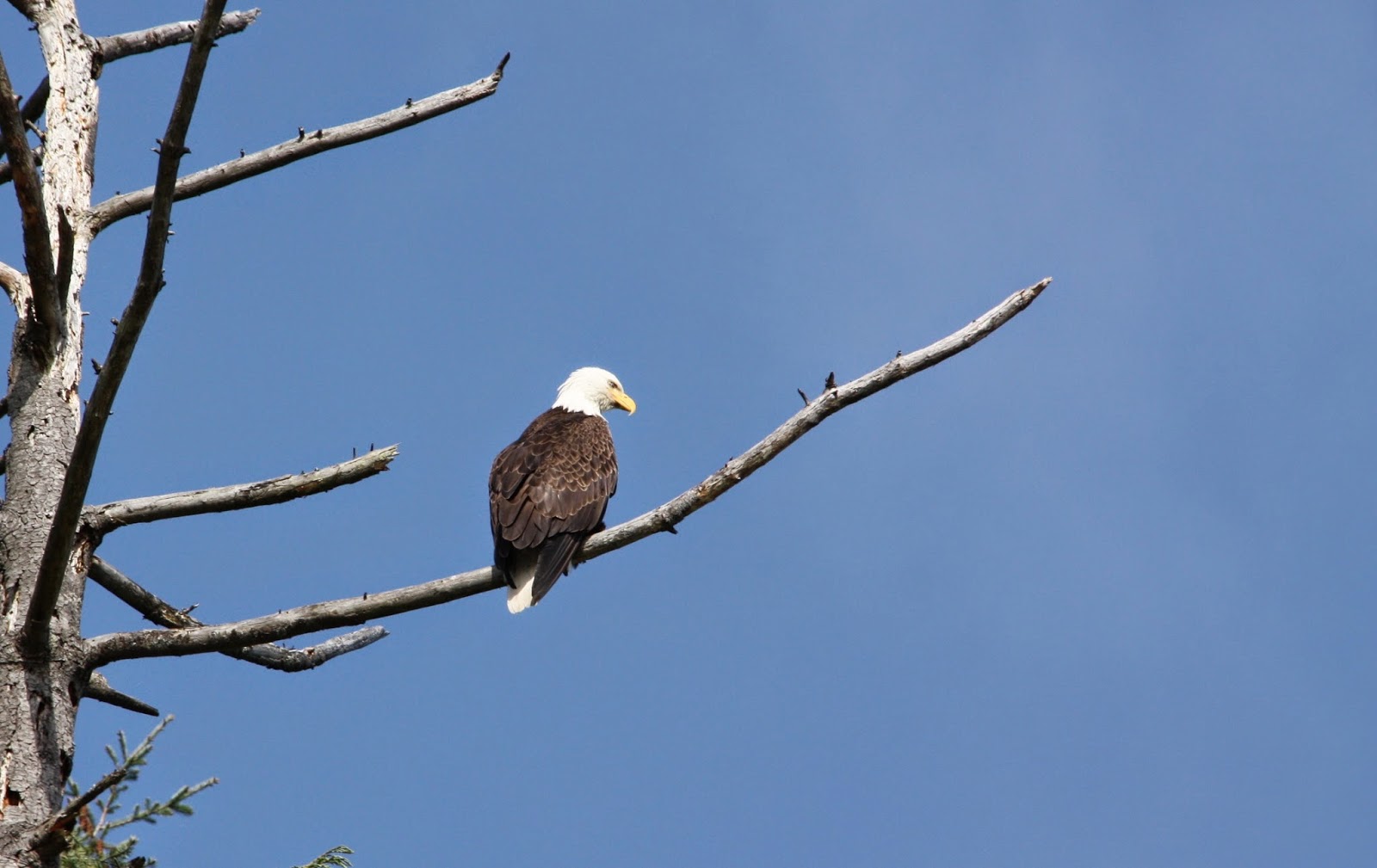 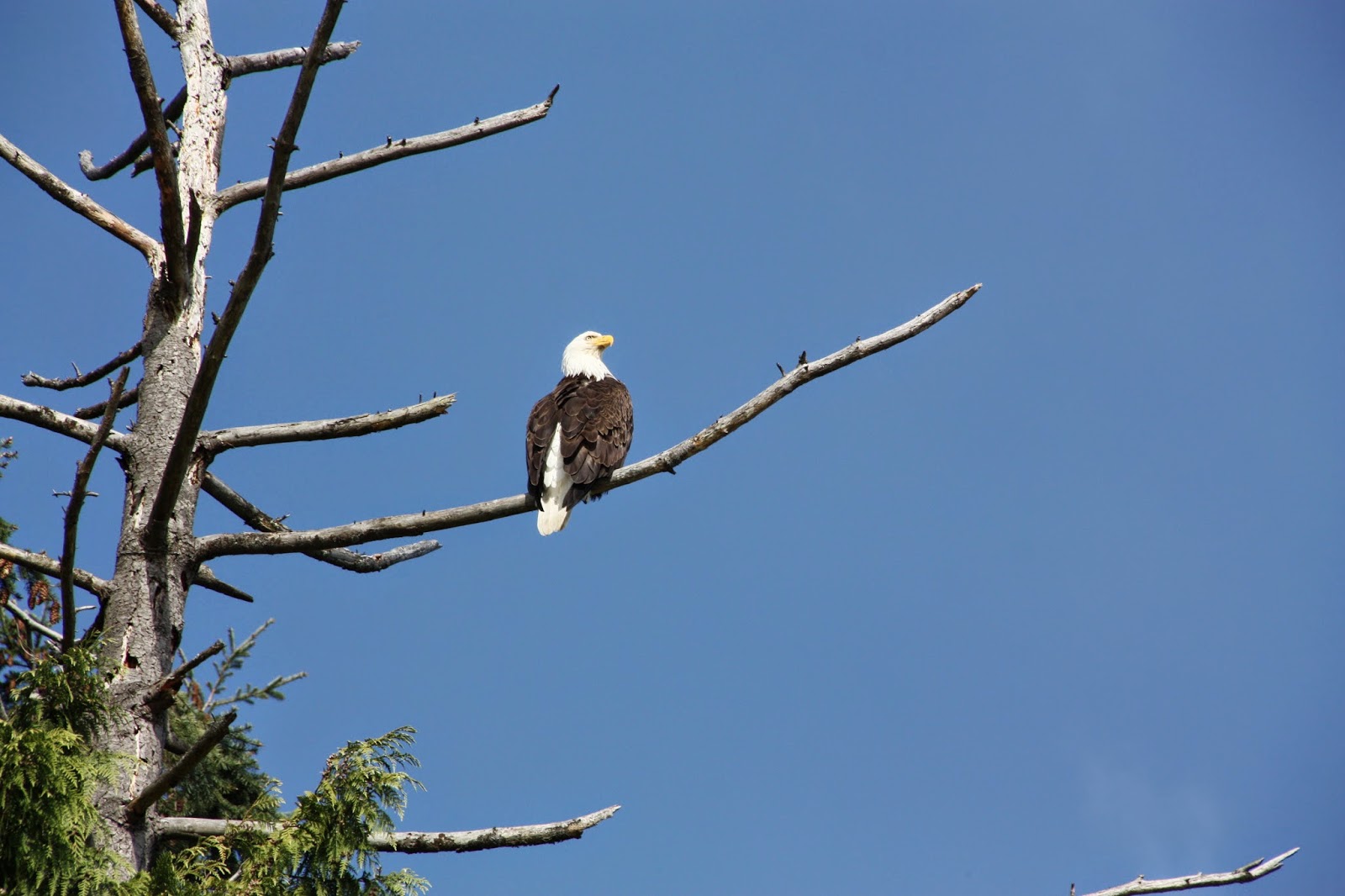 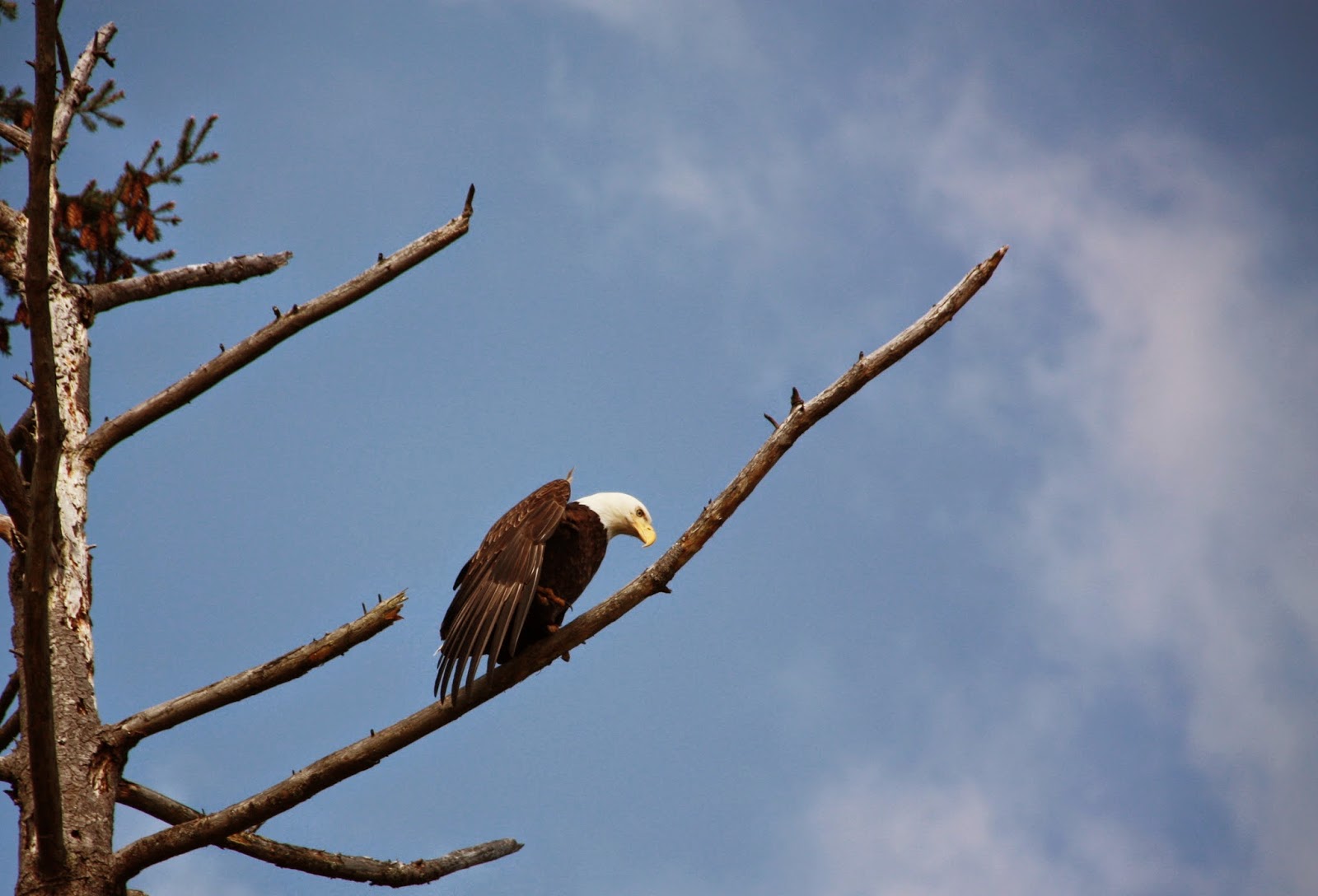 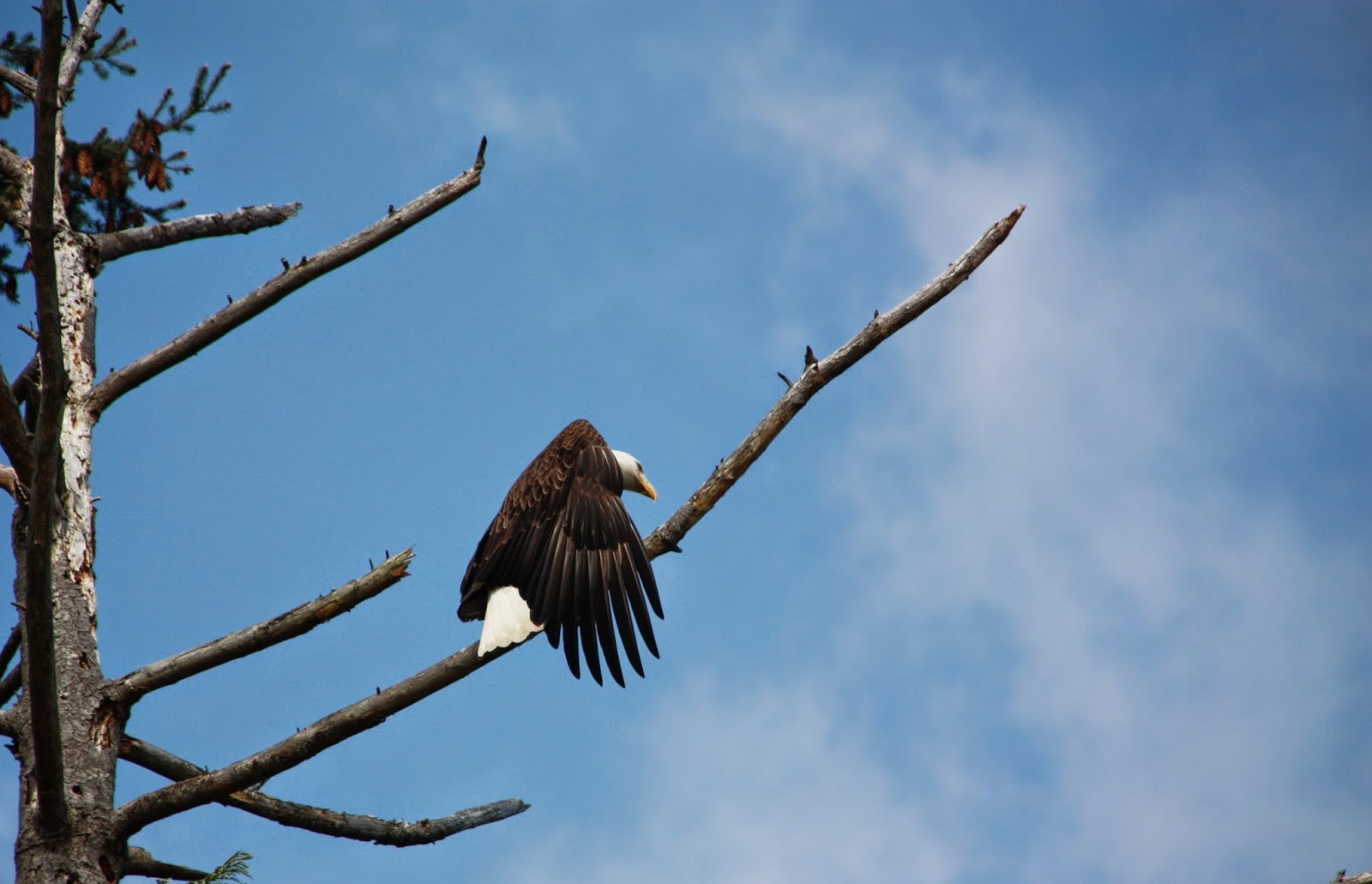 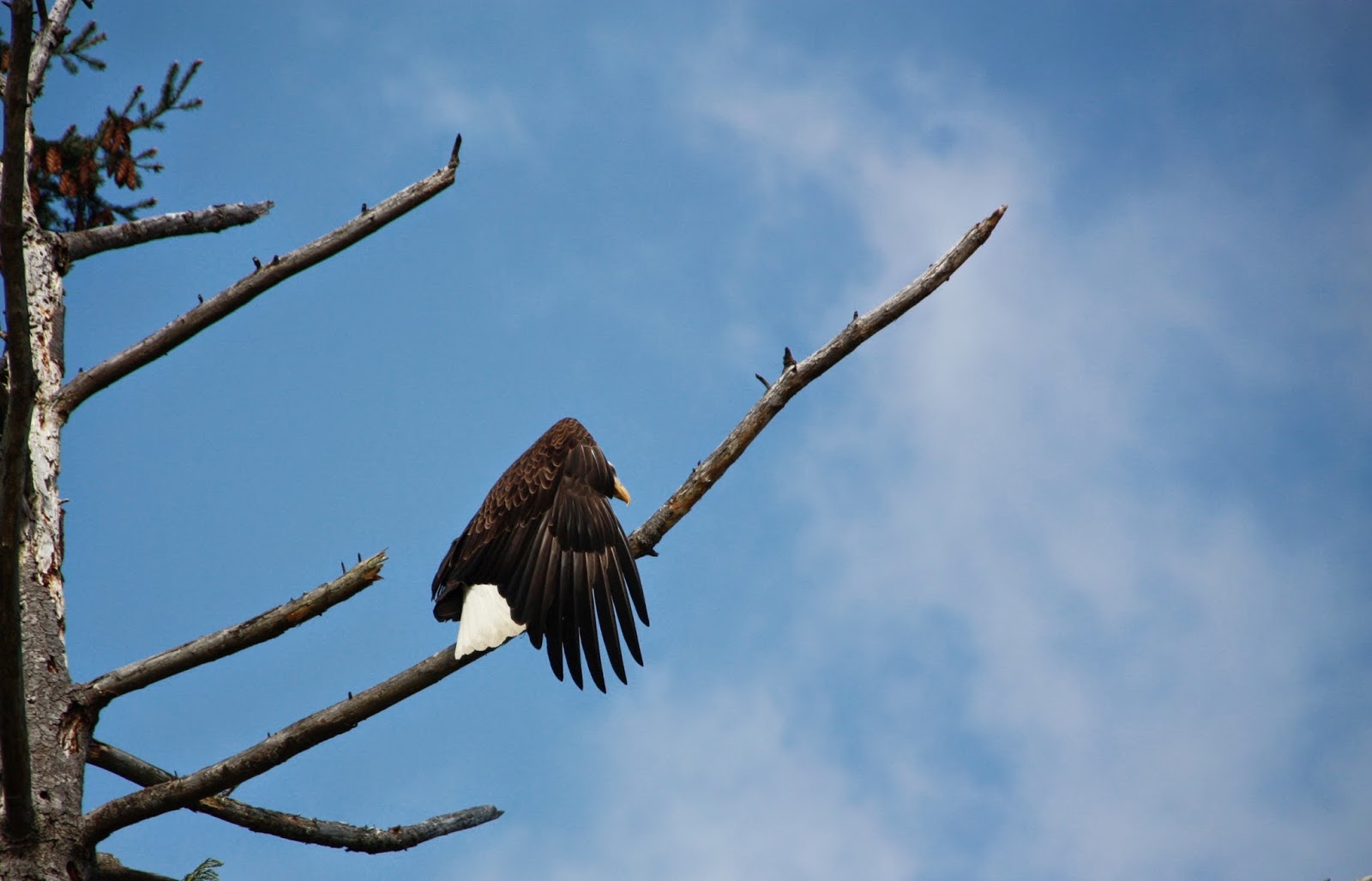 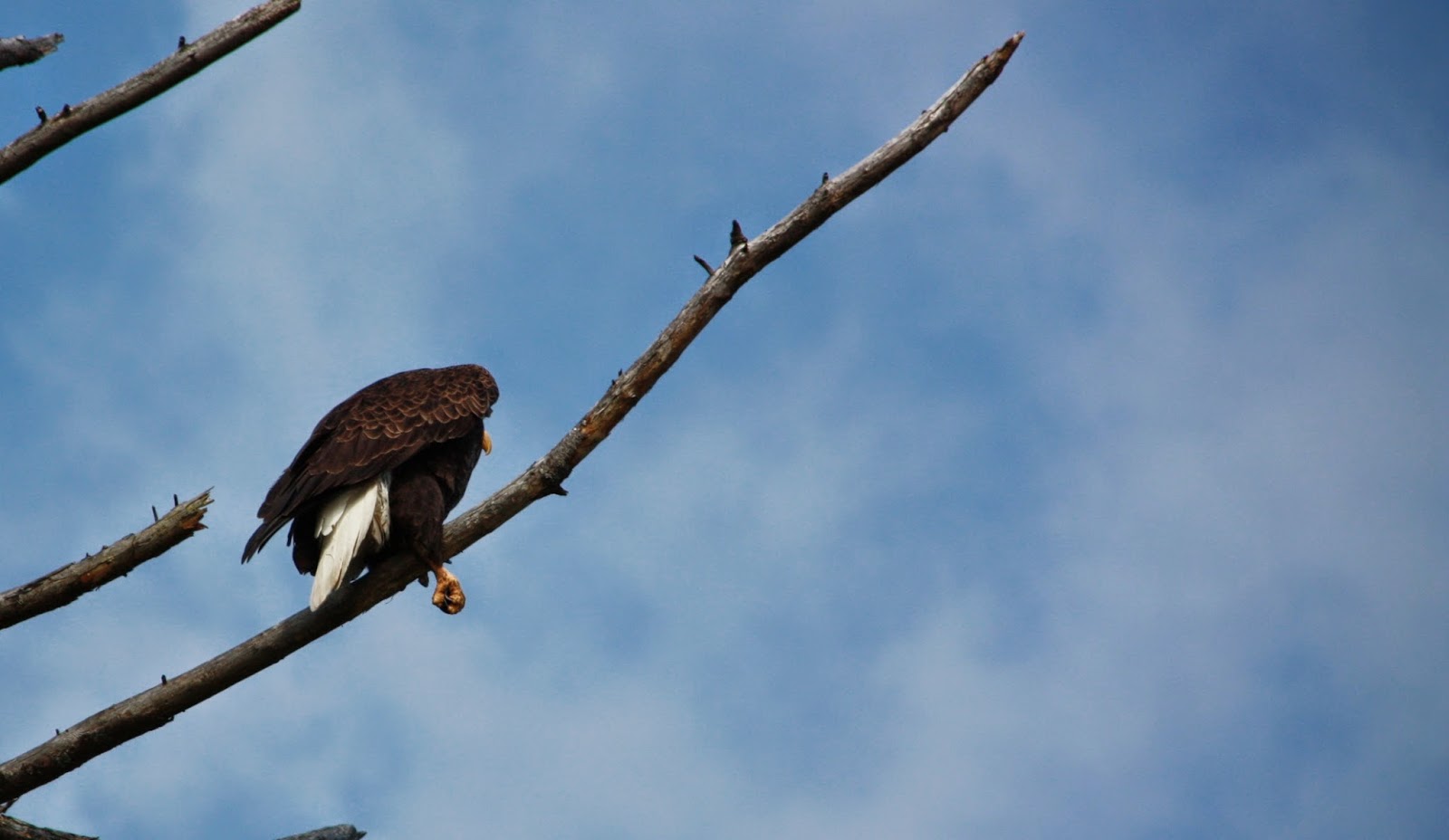 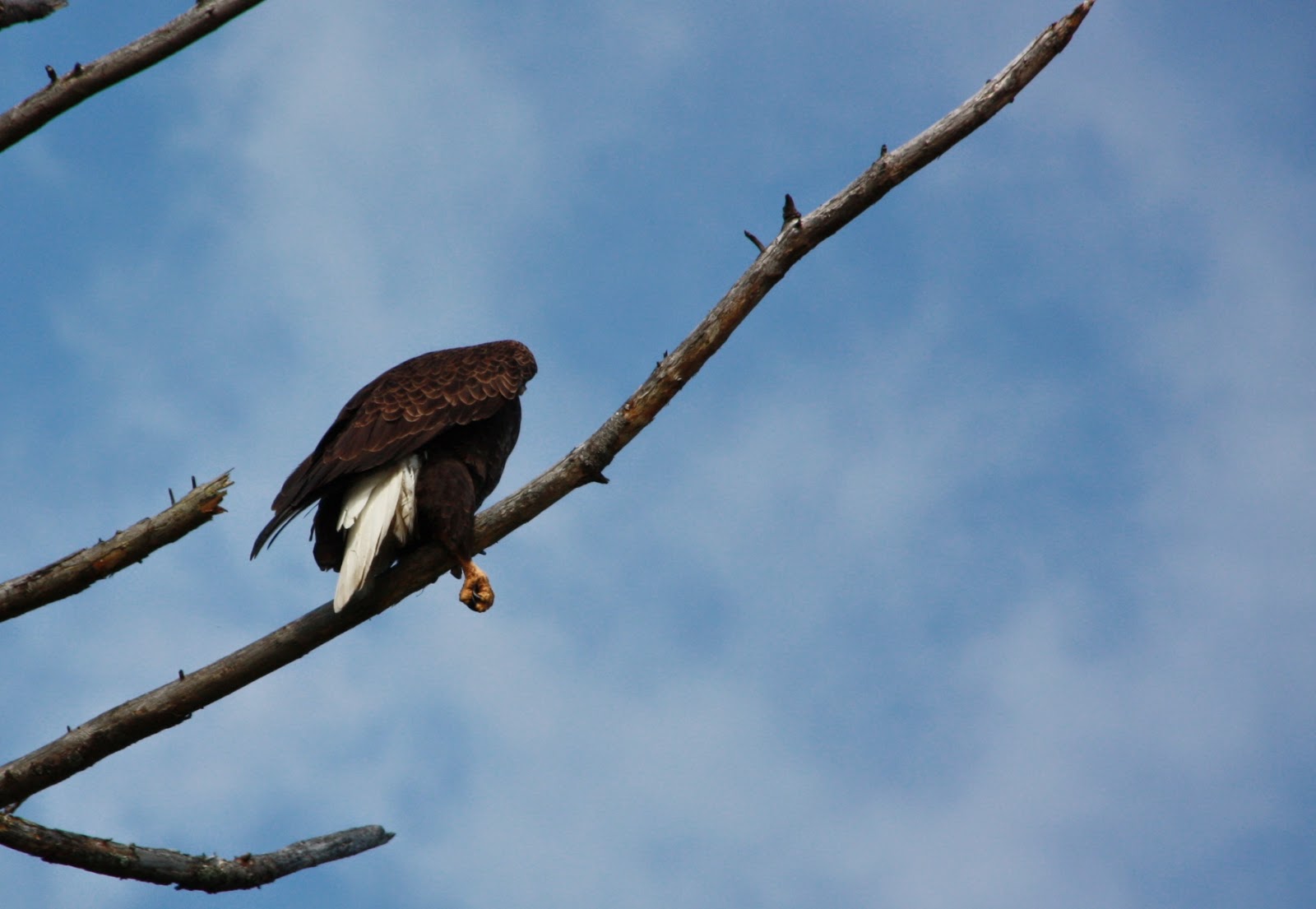 How to Wake a Sleeping Princess

Yesterday was Shiloh's sixteenth birthday.  It was also Mother's Day and my daughter had flown in for the weekend.  And it was my good friend Else's birthday.  It was a busy day - from the moment Shiloh awoke until the garden pawty with her human and doggy friends in the late afternoon.

By the time we brought out the canine 'birthday cupcakes' (yogurt, frozen with dog cookies in them), she was already asleep in her bed.  Of course, I couldn't let sleeping dogs lie - not on her birthday!  I can't resist sharing this series of photos, even though they are terribly out of focus.  Here's how you wake a sleeping princess:

It is the first photo I have ever captured of her 'happy face', and as blurry as it is, I'll be keeping it forever.

Happy sixteenth birthday my sweet girl.  Though you have been with me for only six months, you have brought me so much joy and I love you so very much.


On my way back from Vancouver, I decided to visit the George C. Reifel Migratory Bird Sanctuary before going to the ferry terminal.  It had been years since I'd last been there, and I'd forgotten how peaceful, beautiful and entertaining it is.  While at first there didn't seem to be a lot of birds in evidence other than ducks and geese, the scenery alone was enough to make the trip worthwhile: 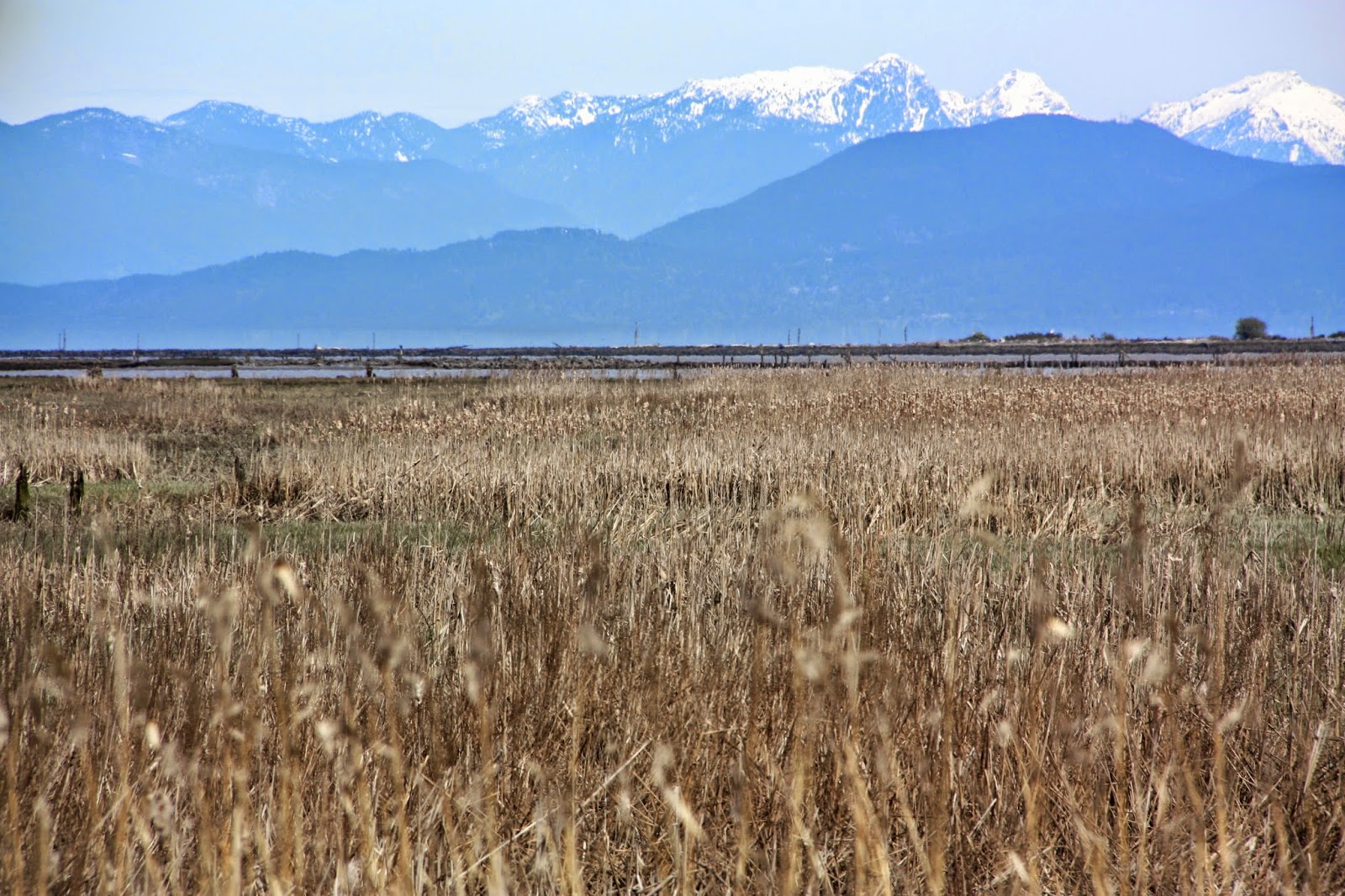 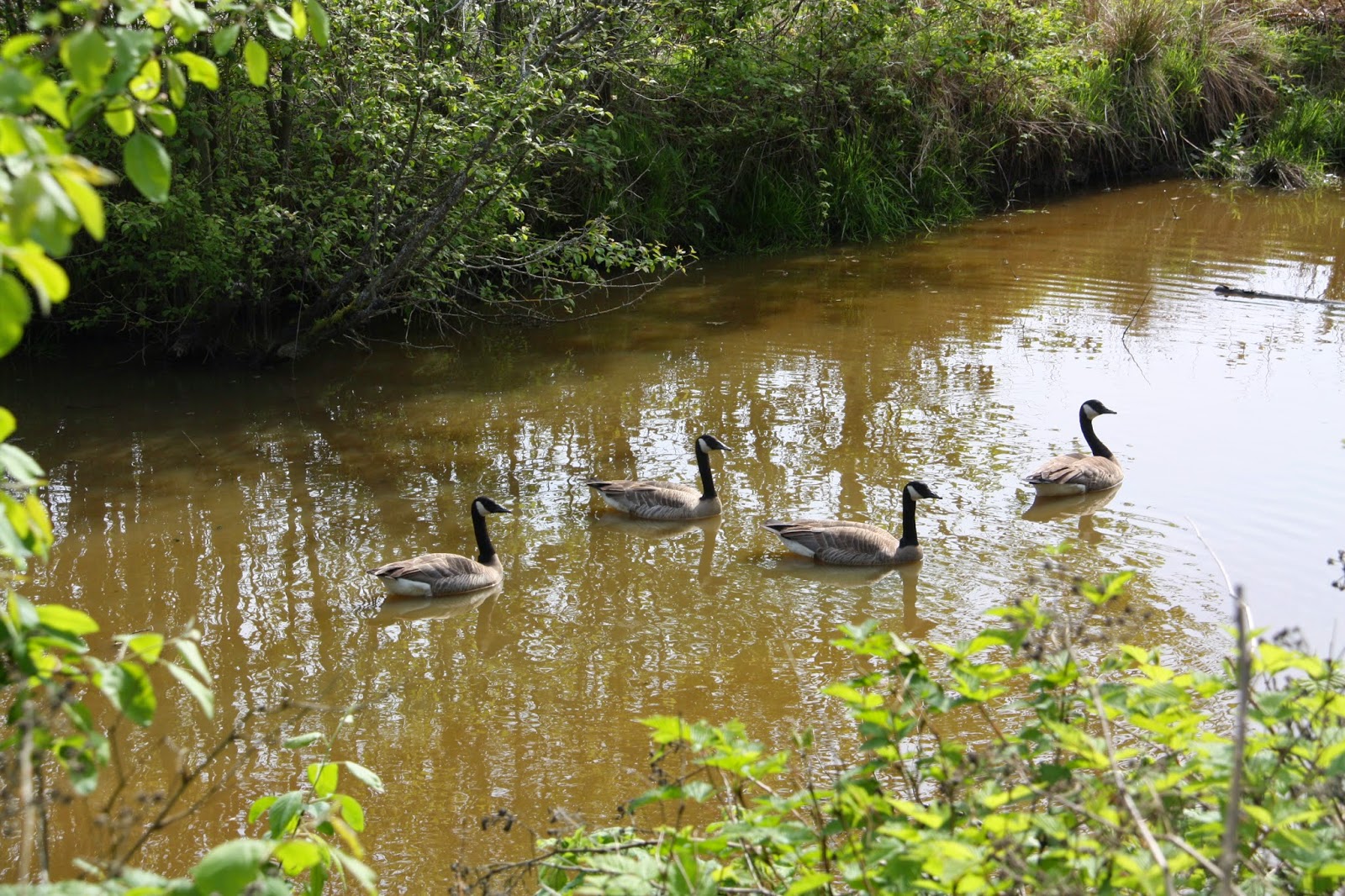 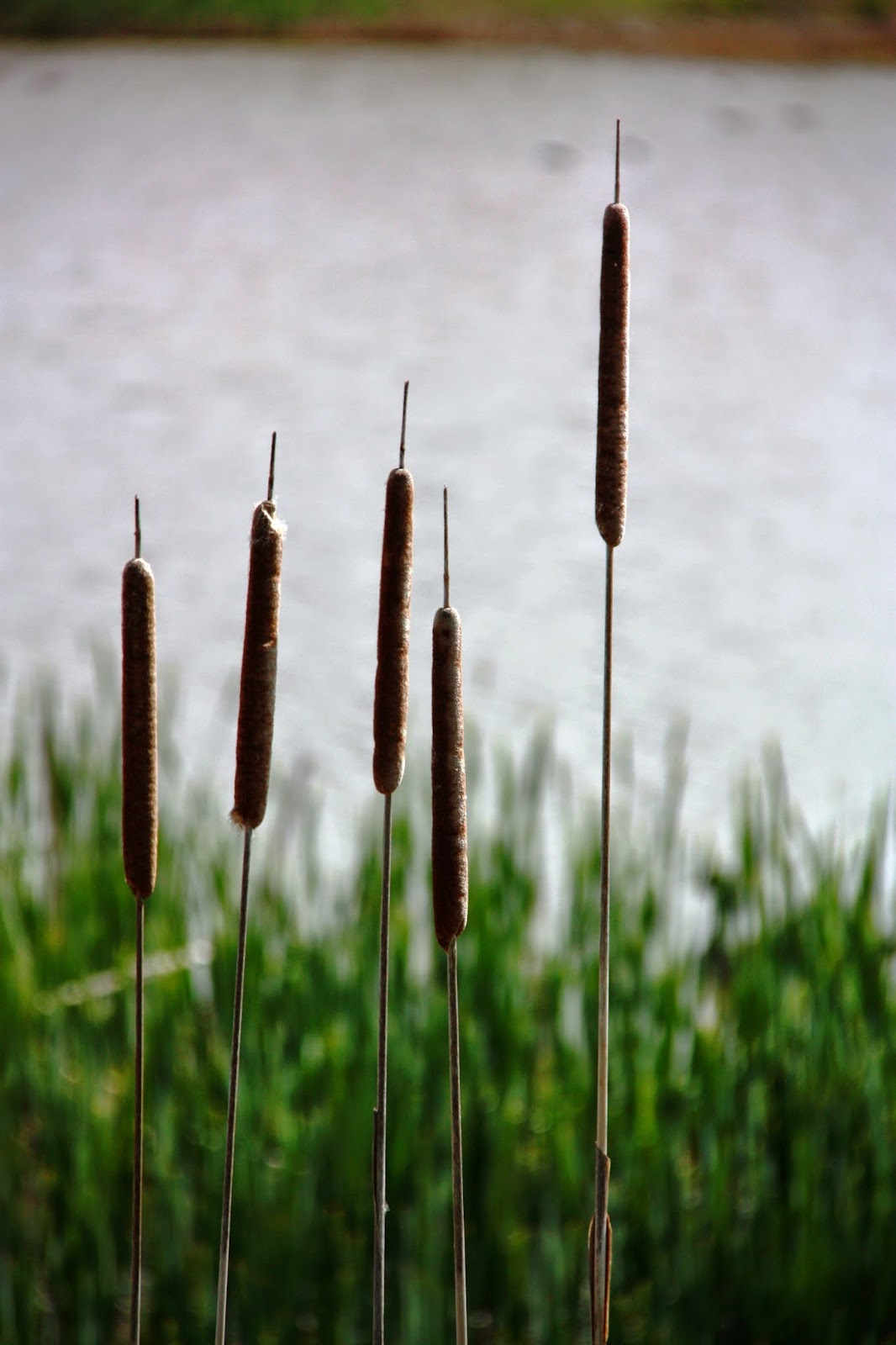 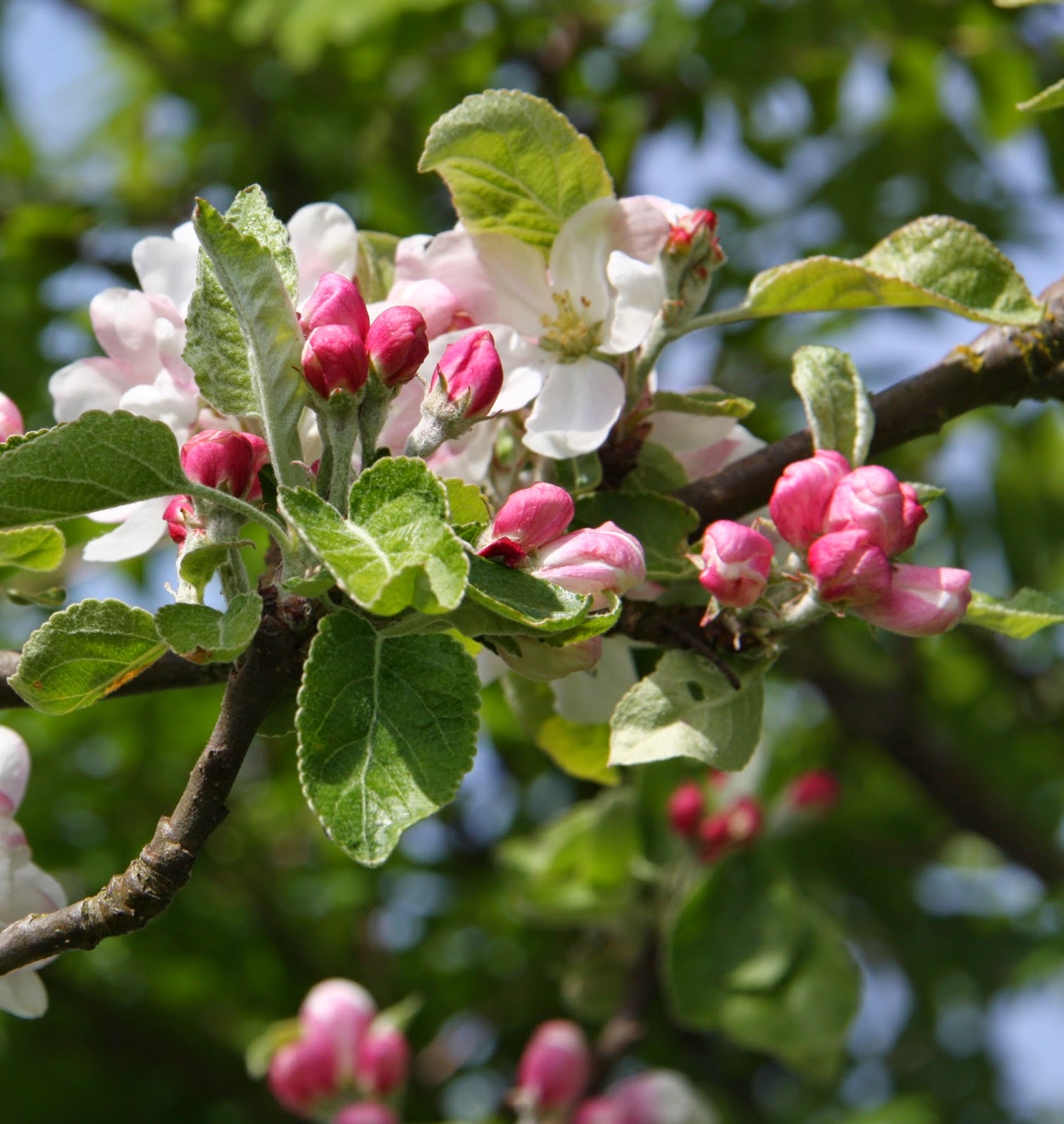 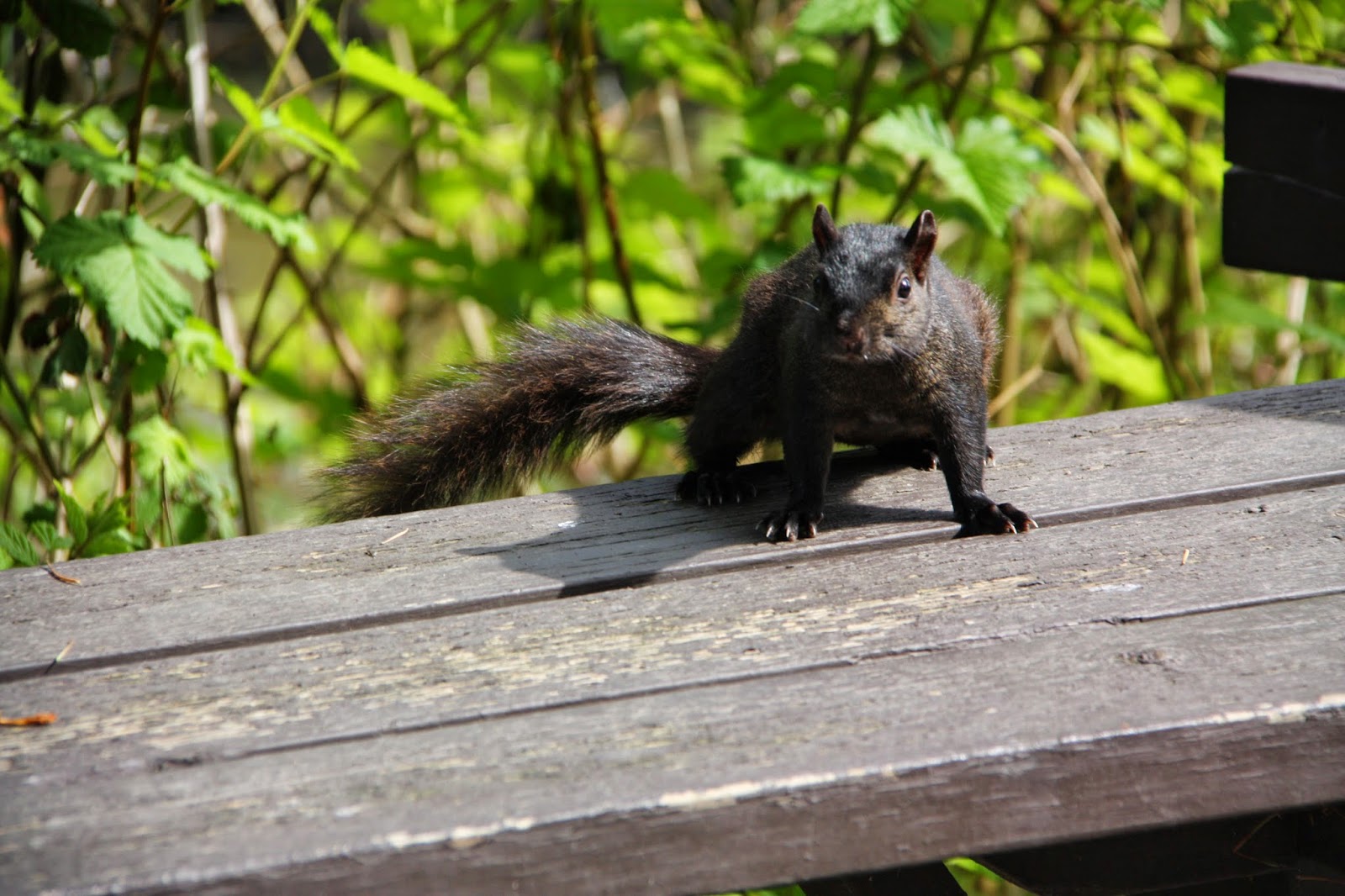 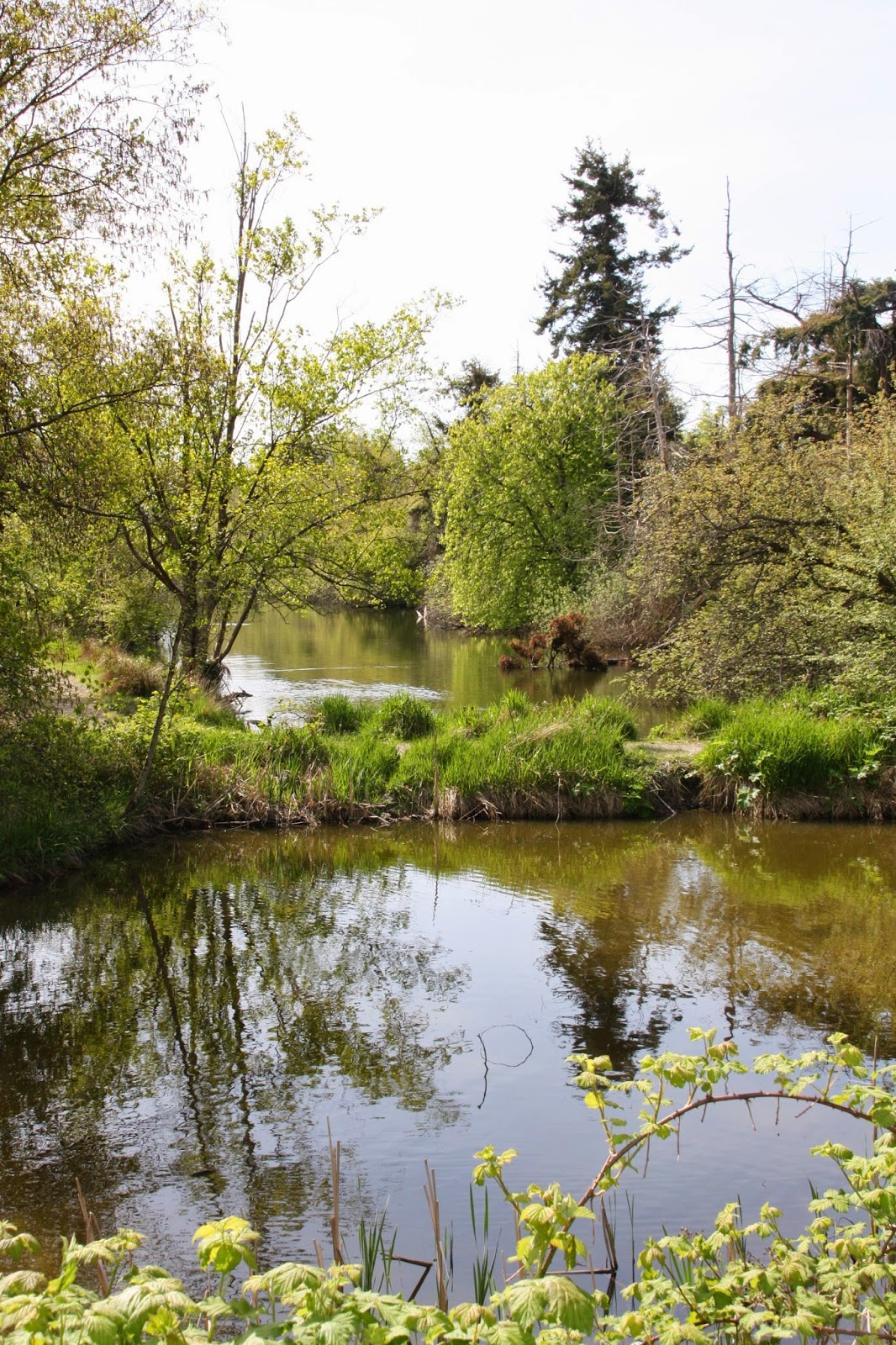 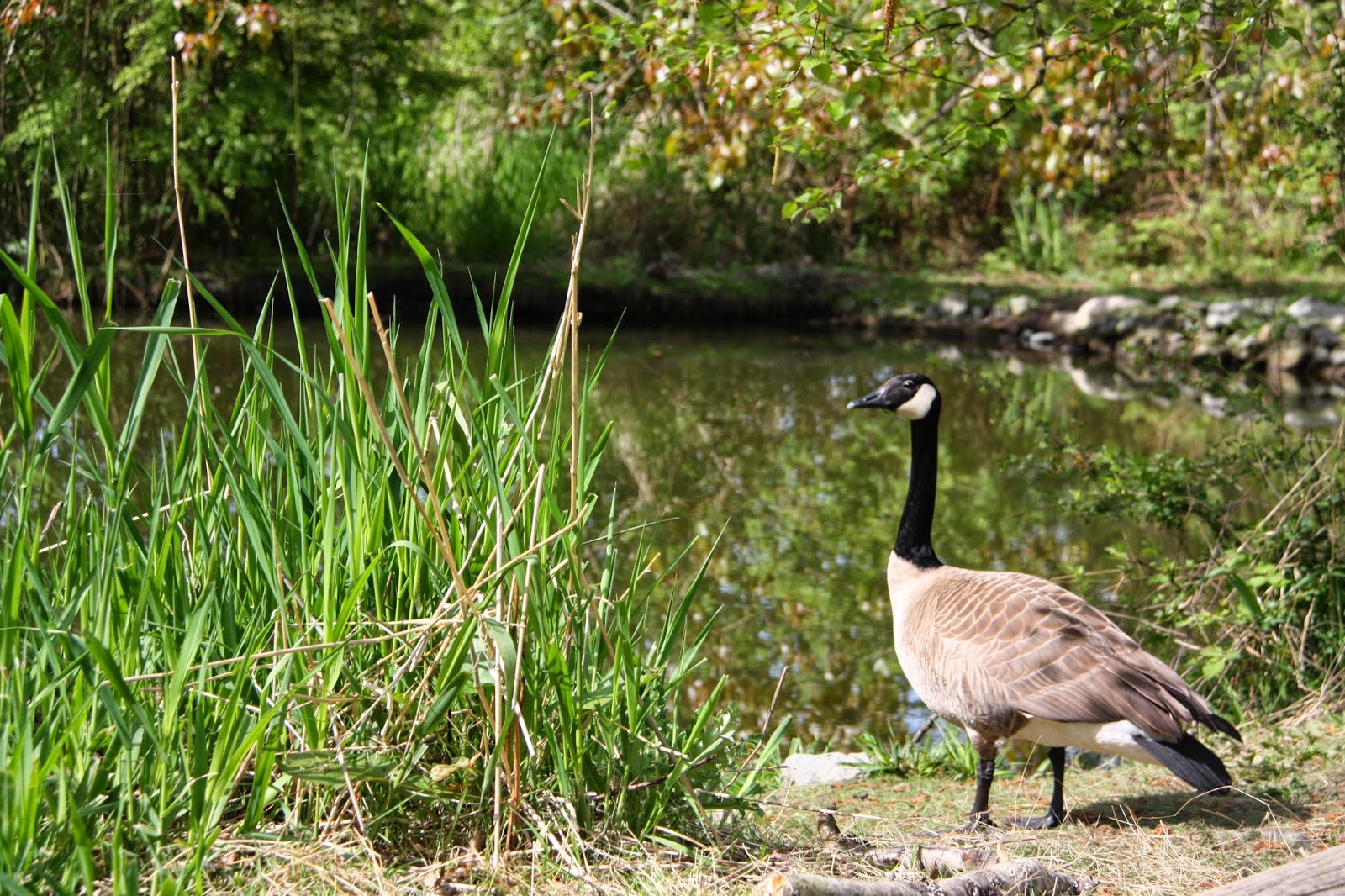 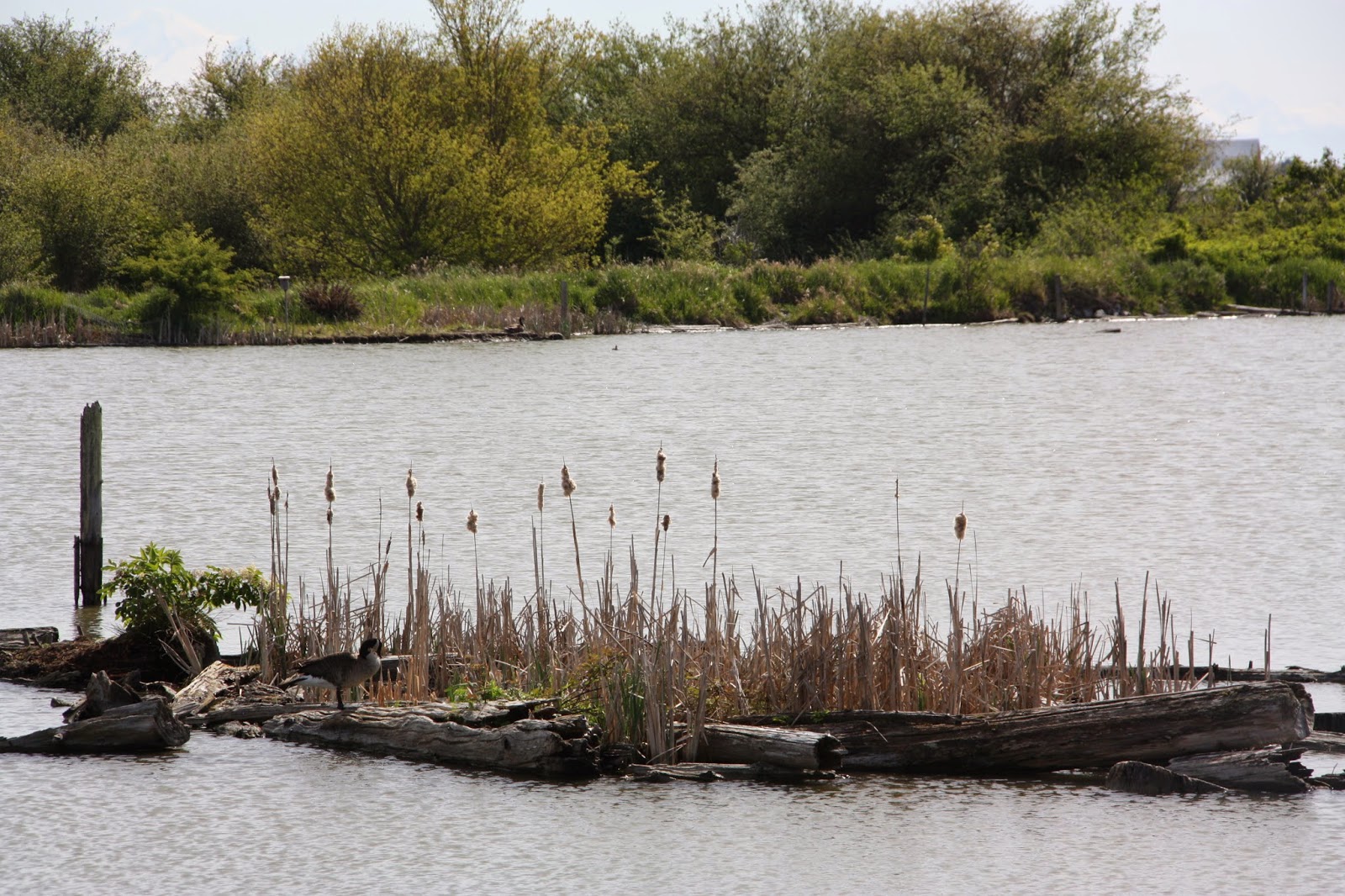 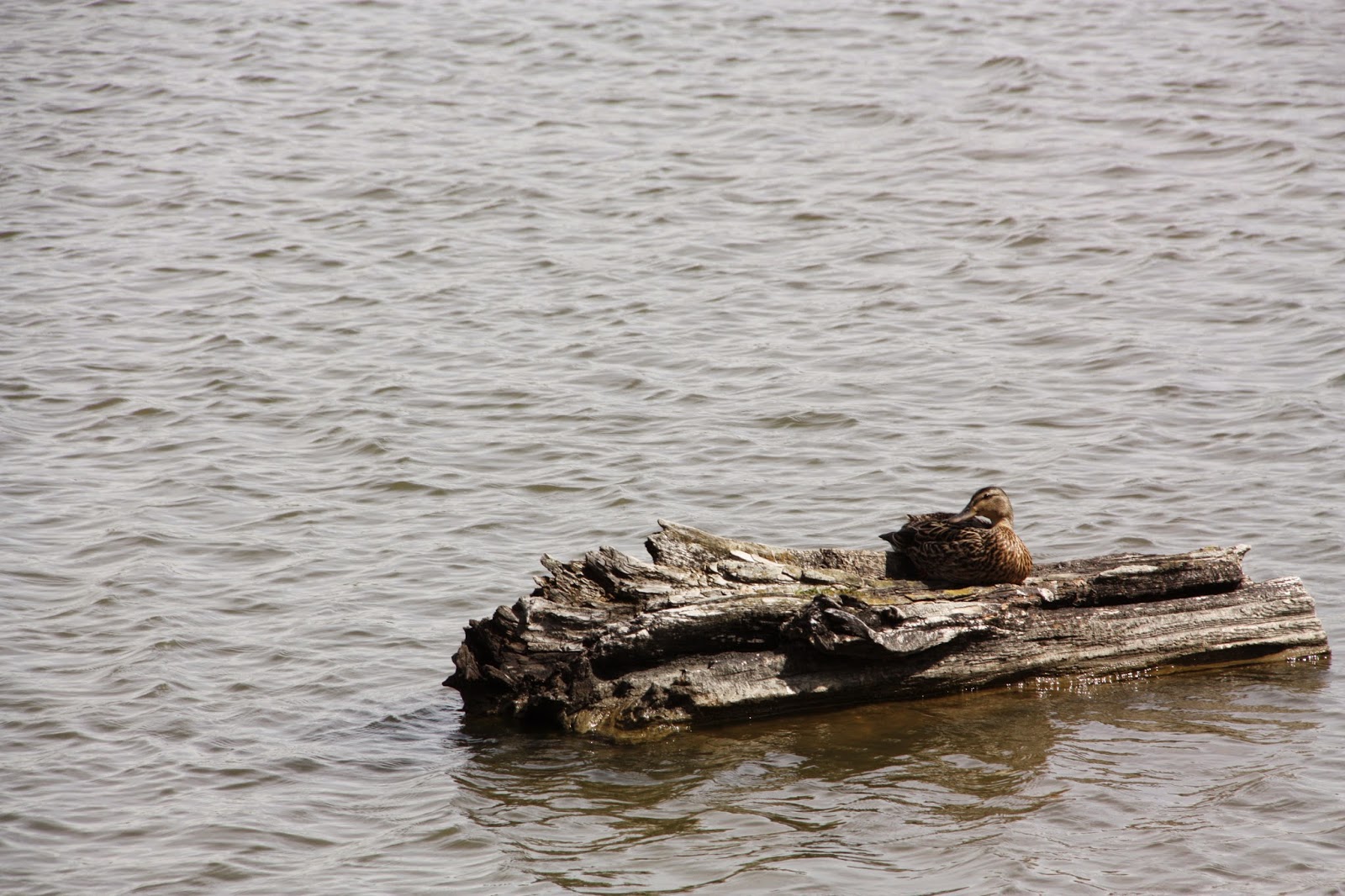 The ducks and geese certainly weren't shy of strangers.  The sanctuary does sell bird seed, but with the camera and gear to carry, I chose not to buy any.  The ducks were not amused.  These two came running to greet me, fully expecting a handout:

And the female very nearly turned herself inside out in hopes she would be rewarded. 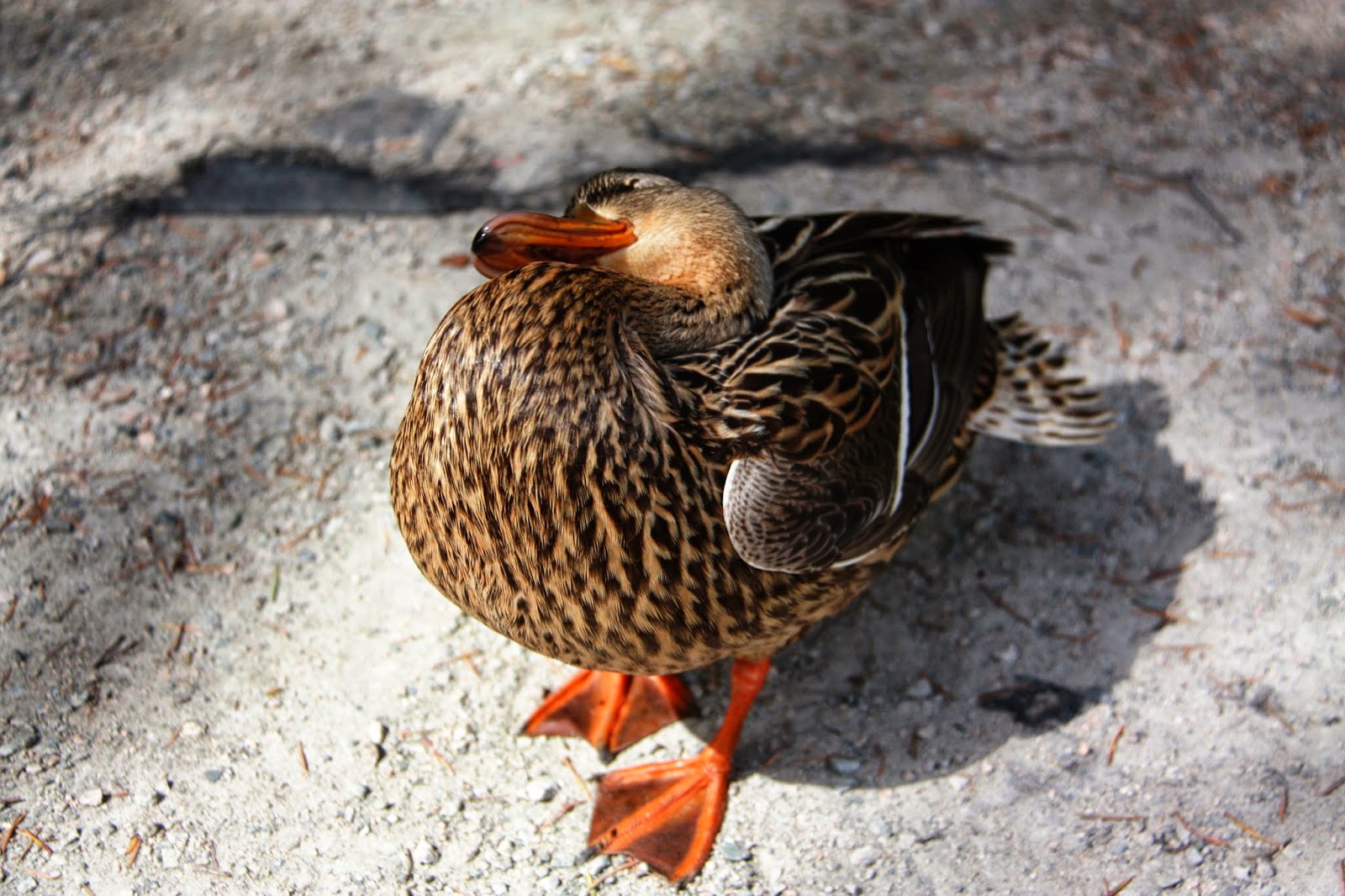 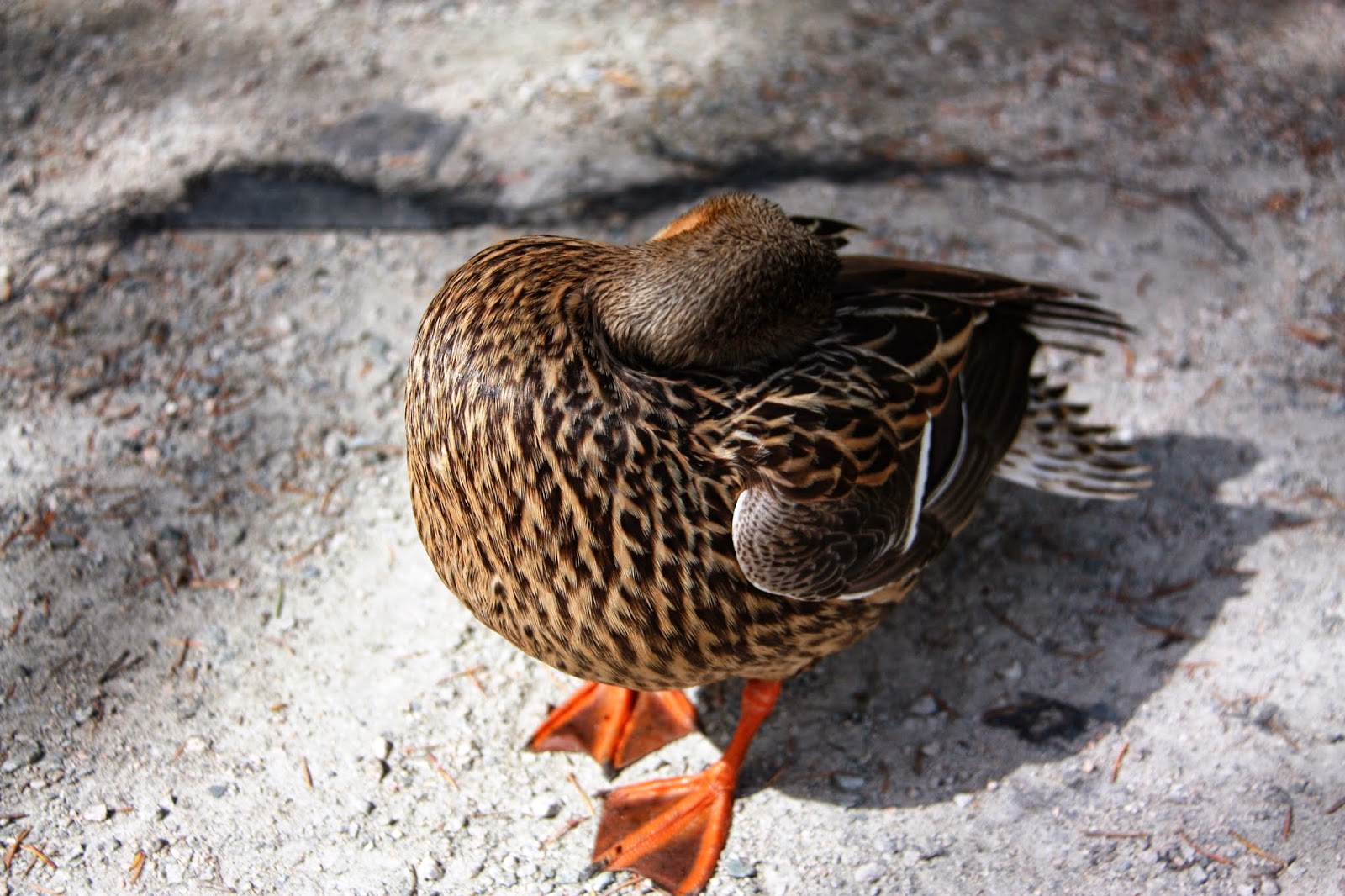 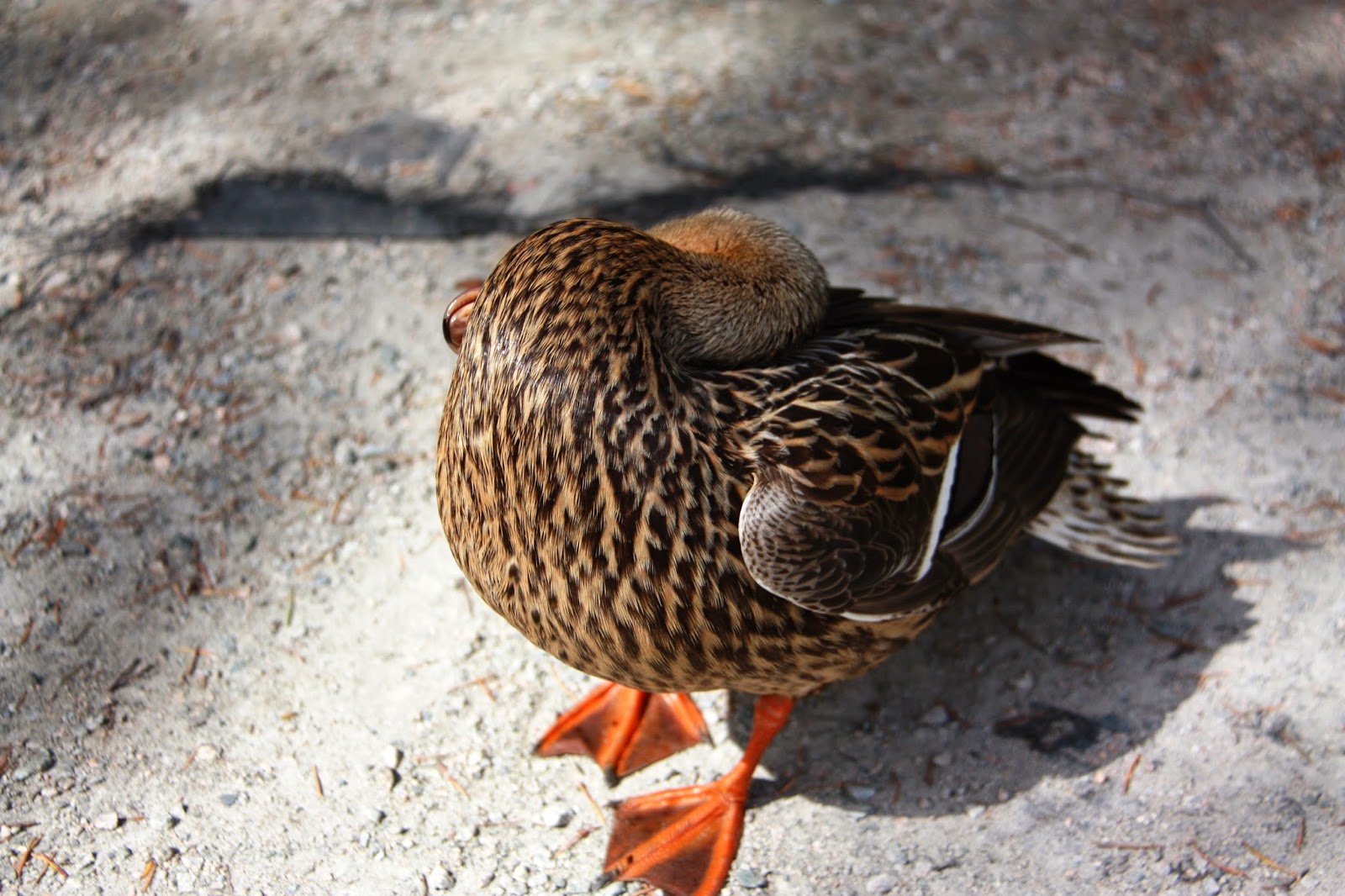 But alas, even if I had seed to give, these two characters happened to be in a small area where feeding was not permitted. 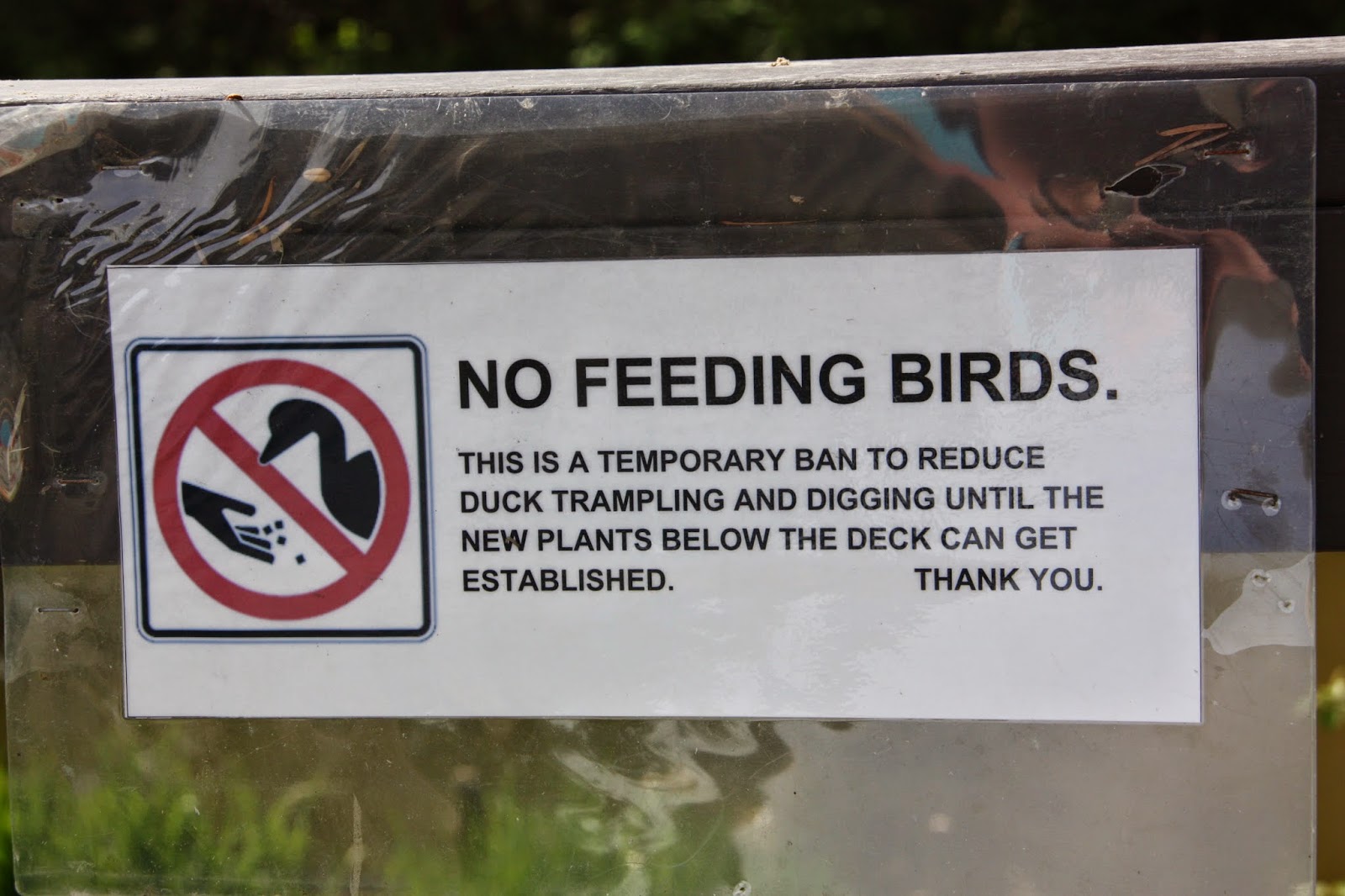 I showed them the sign, but they feigned ignorance and continued to cosy up to me, showing off their beautiful feathers and their delightfully orange feet.

I said goodbye to the pair and continued along  the trail.  Most of the geese and ducks were very social, but one pair of geese hissed at me as I moved to sit on a bench. 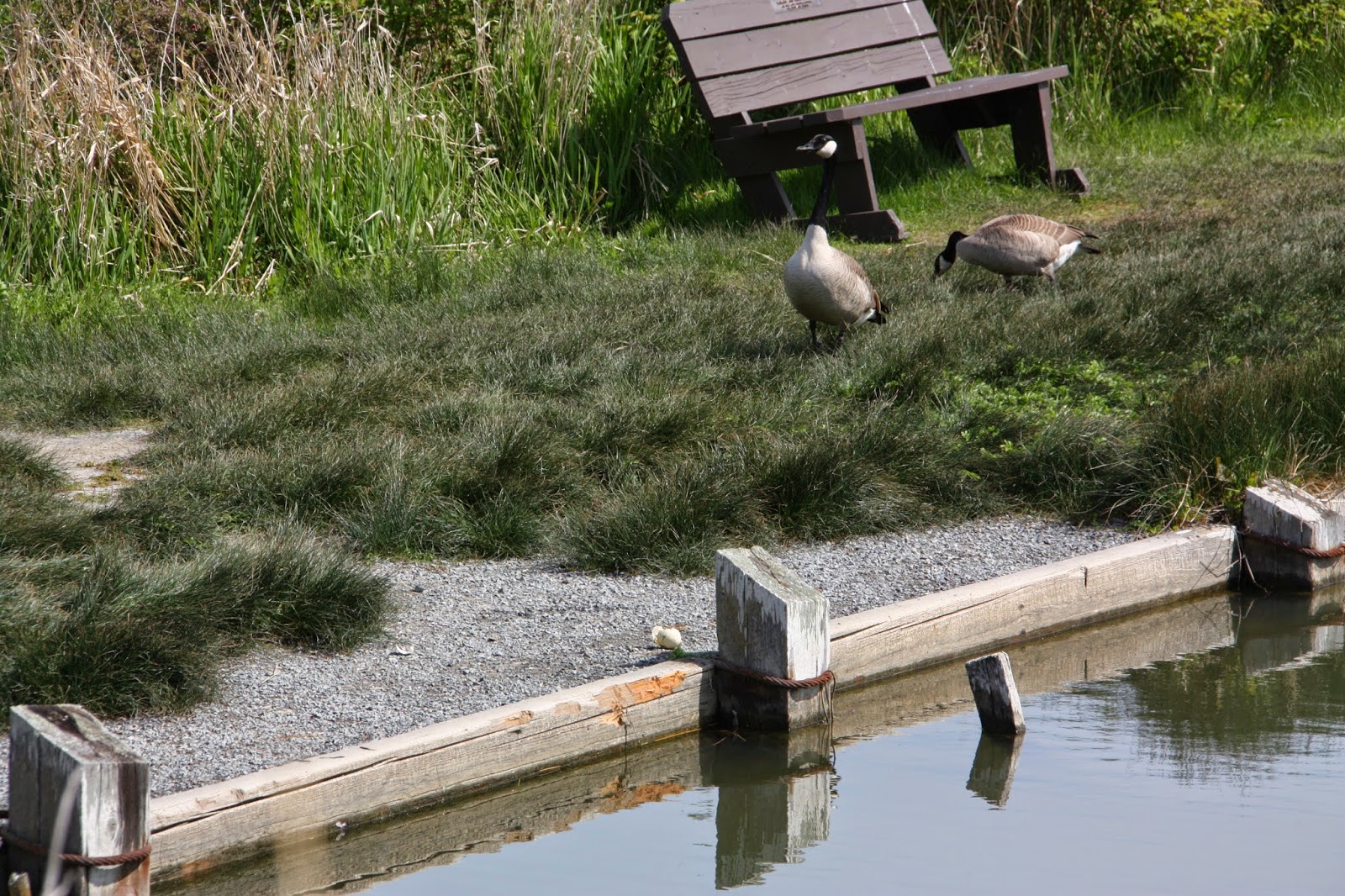 I soon saw why.  On the ground near their feet, was a freshly broken, still moist goose egg.  I saw no chick, and wasn't sure (from the remnants of yolk on the egg) whether the egg had been destroyed by another bird or animal in the sanctuary or whether their newly hatched infant was tucked away in the tall grasses somewhere nearby. 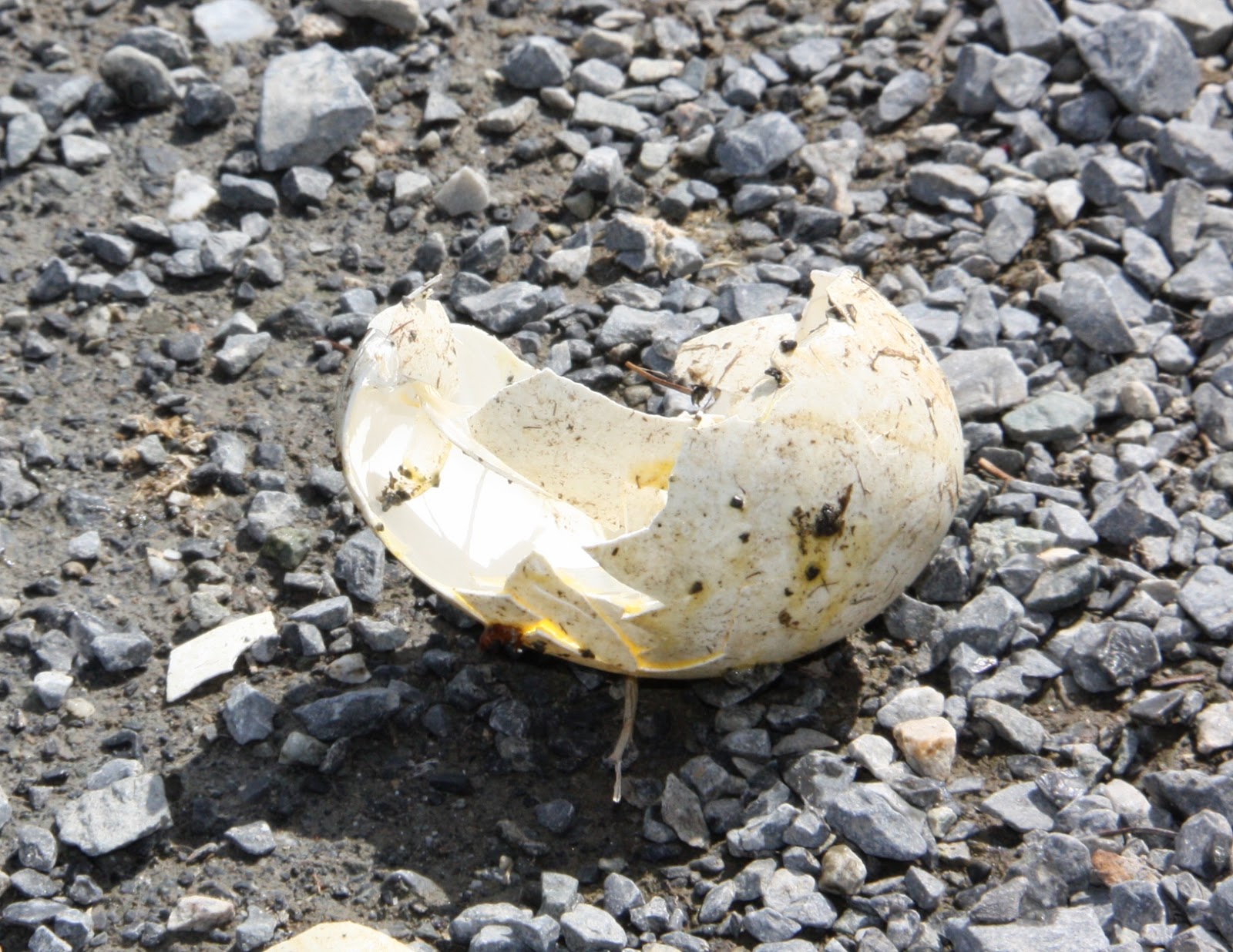 I choose a different path, and soon saw and heard many smaller varieties of birds.  Their songs were everywhere, and often it took me a while to spot them in among the leaves and brush and reeds - photographing them was even more difficult as many blended in with their surroundings. But I did capture a few shots:


The best bird shots, without a doubt, were those of  the red-winged blackbirds. While the ones at home are somewhat elusive and hard to capture on film, these were quite unafraid and enjoyed talking to me in their distinctive, multi-toned clicks and trills and musical cong-ka-reeeee: 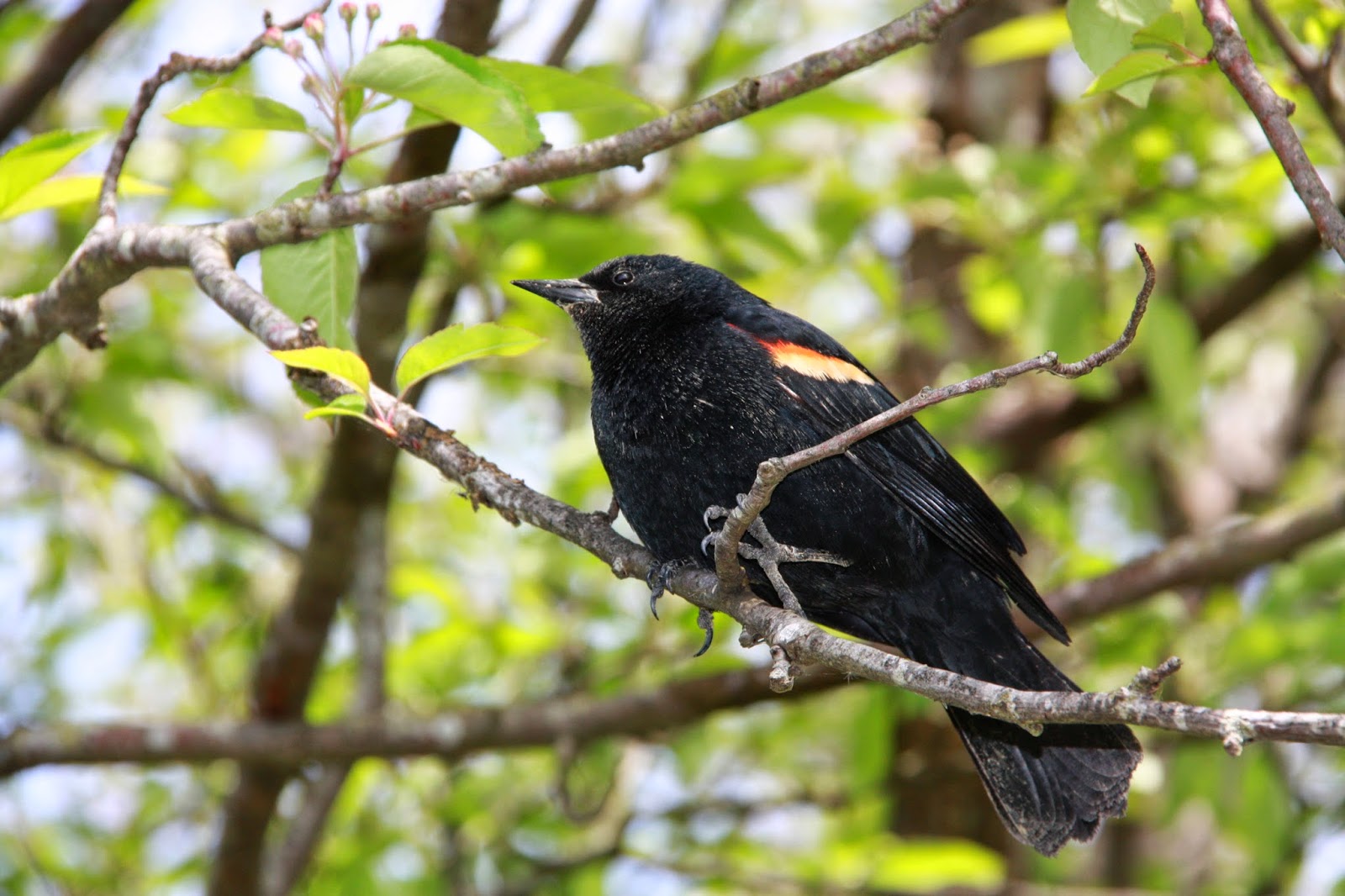 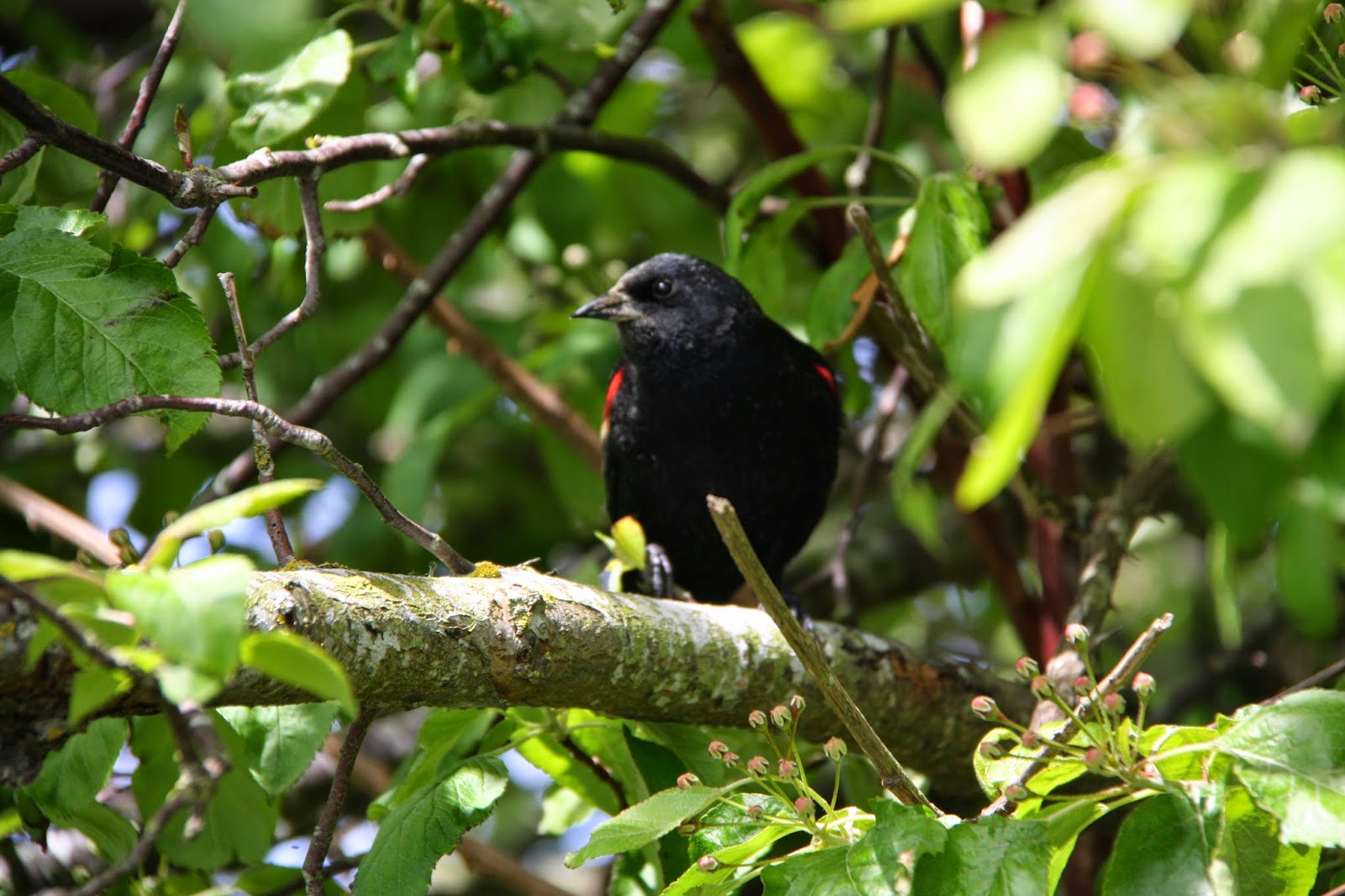 But the highlight was something completely unexpected - not a bird at all.  At first, I just saw a dark bump on the trail and feared it was a dead duck: 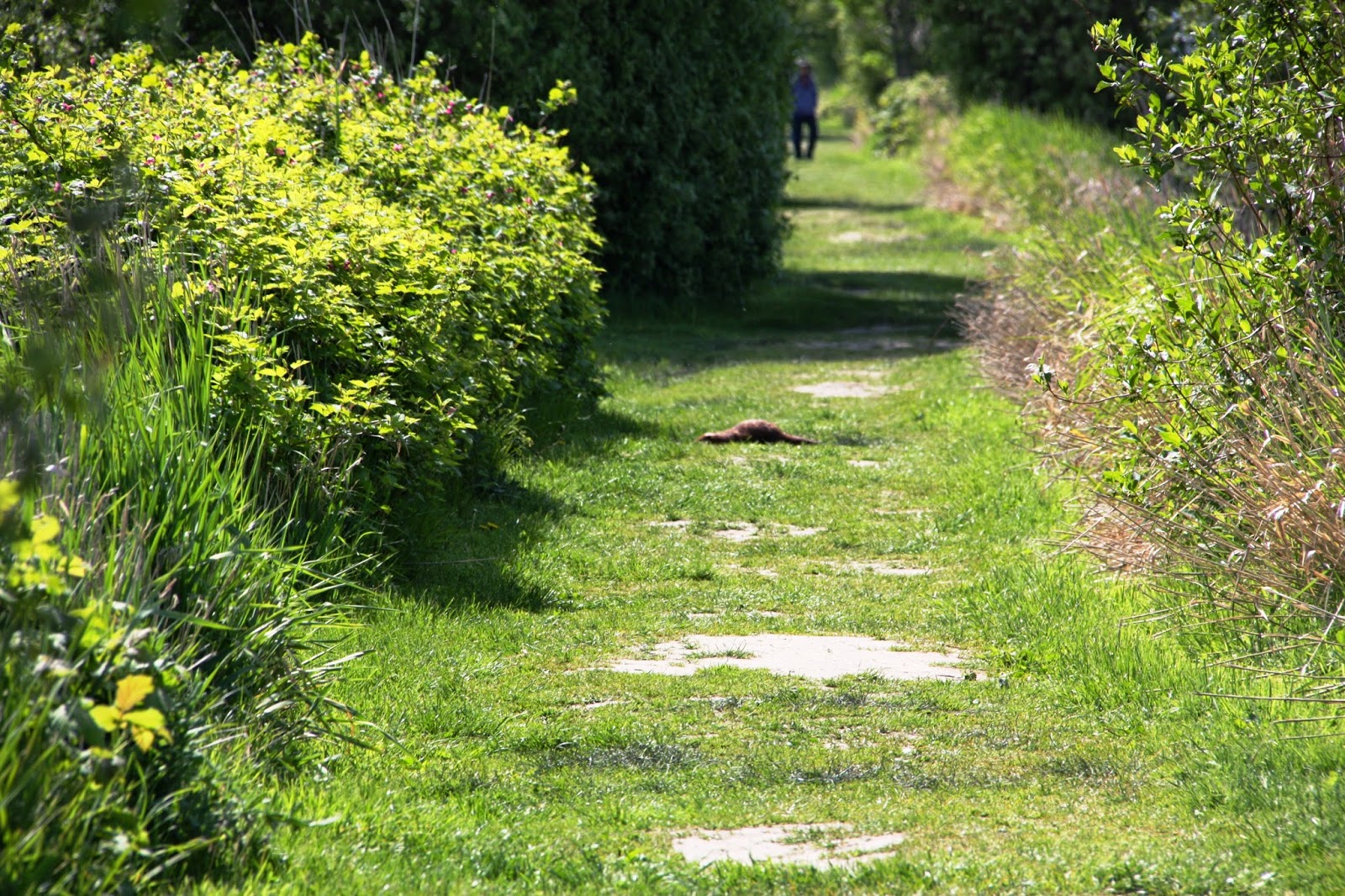 who then dove into the brush and pounced back out with his (or her?) dinner: 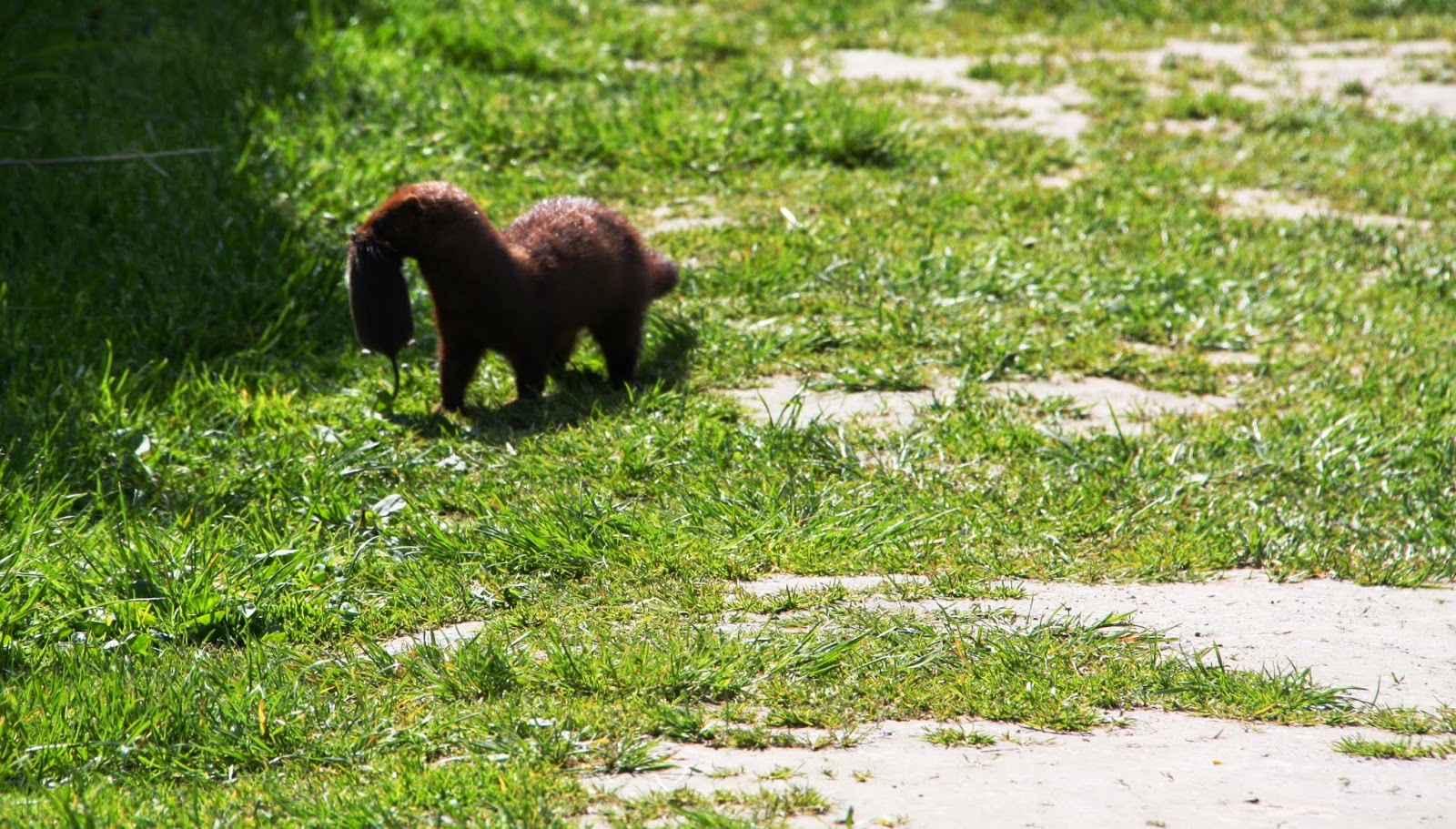 I stood still on the path as Mr. Weasel tried to decide which way to go - he ran towards me, hesitated as if to dive into the brush, then must have seen the camera and decided he'd like to be a star......because all of a sudden he came running right up to me, just long enough for me to catch this image:

Mr. Weasel, you made my day.  I'm just sorry Missy Mouse's day was ruined in the making.

All photos copyright Jean Ballard 2014.  Do not use without permission.
Posted by Jean at 9:26 PM 7 comments: