When Rainy Days are Mondays

When rainy days are Mondays, one of my usual hiking days, I don't let it get me down.  Unless the rain is torrential, my friend Sally and I head out anyway - glad for the fresh air, exercise, freedom from mundane chores, in the beautiful outdoors of Vancouver Island.

Today was one of those rainy Mondays.  It was pouring heavily when I arose, but by eight it had improved somewhat - a steady rain but light and reasonably warm.   We chose one of Nanaimo's urban parks, less than an hour north,  where we knew the trails to be quite sheltered from rain and wind, and quite well maintained to provide safe footing in wet weather. Colliery Dam Park is one of Nanaimo's larger parks, with loop trails around two lakes (dogs permitted off leash around one, on leash around the other), plus numerous little side trails.  The paved, multi-use Parkway Trail also cuts through the park.


Nanaimo does a stellar job of creating urban parks that have a delightful balance of development and wilderness.  Entering the park, we encountered a small covered picnic area and washrooms, and scattered around part of the first lake were park benches, information boards about the park (maps, history,  vegetation, fish stocking program - fishing is encouraged!),  and attractive landscaping. 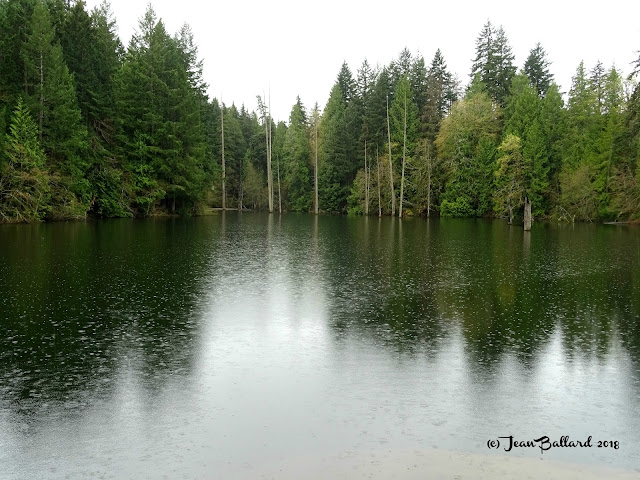 But shortly after crossing the bridge where the water from the lake flows down the channel, we diverged into the forest where one forgets the city is all around - tall trees, duff trails, large moss covered boulders, more rugged lakeshore. 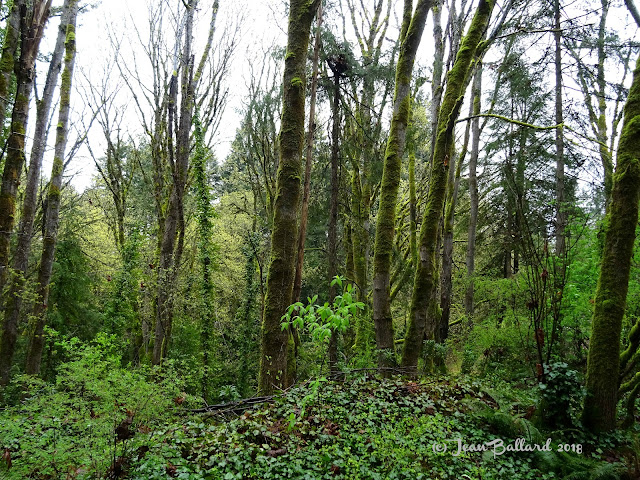 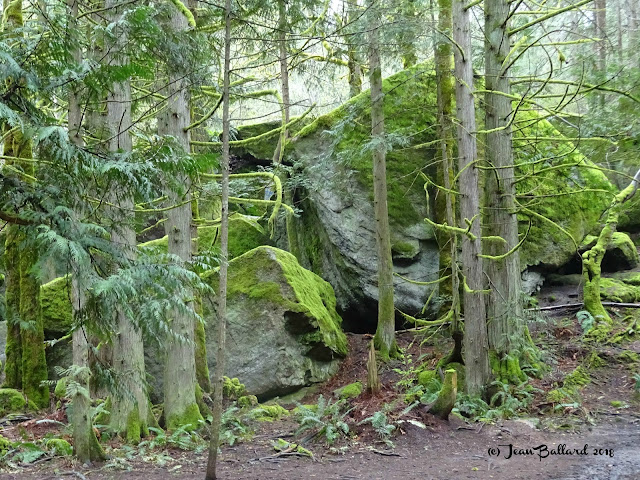 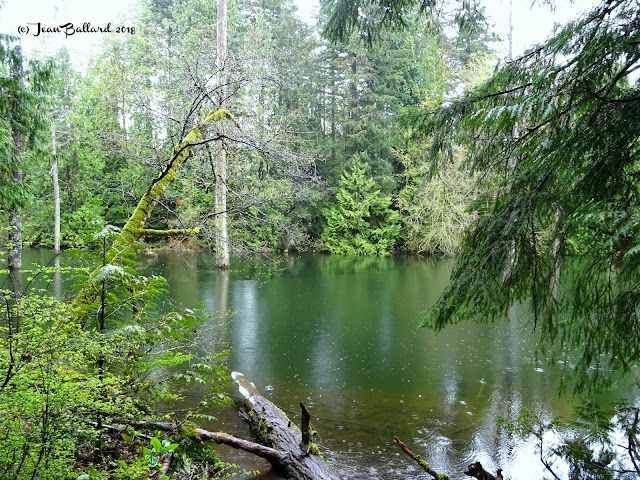 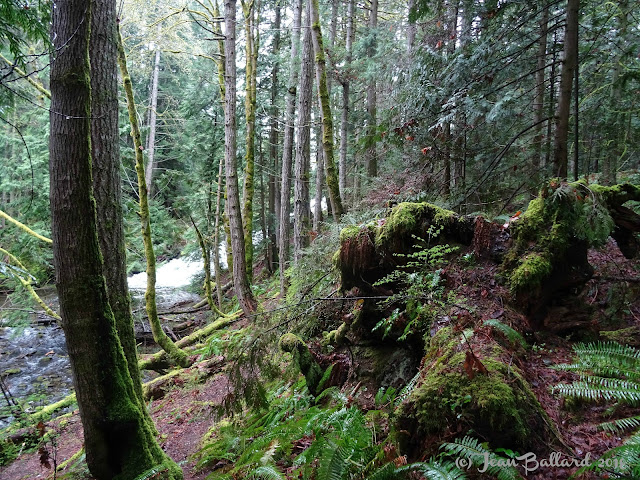 I have done the main loop trails several times, but this time we chose to explore some of the many side trails, some a little muddier and rockier, and our efforts were rewarded as we discovered things we had not seen before.   Where the park nears a road (heard but not seen), and just after we had crossed over a narrow rushing stream on an interesting little bridge, we saw a side trail and decided to check it out.  A splash of colour down below beckoned us, and that was when we saw a graffiti bedecked tunnel . 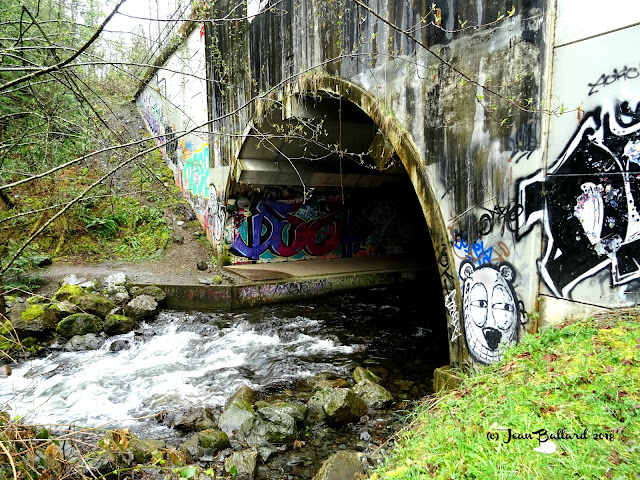 As we were admiring the colourful work, we suddenly spotted a man and dog come out of the tunnel and realized it was not merely a passage for the water heading to the lake but also a pedestrian underpass.  We scrambled back up to the main trail, crossed the bridge again and scrambled back down to check it out. 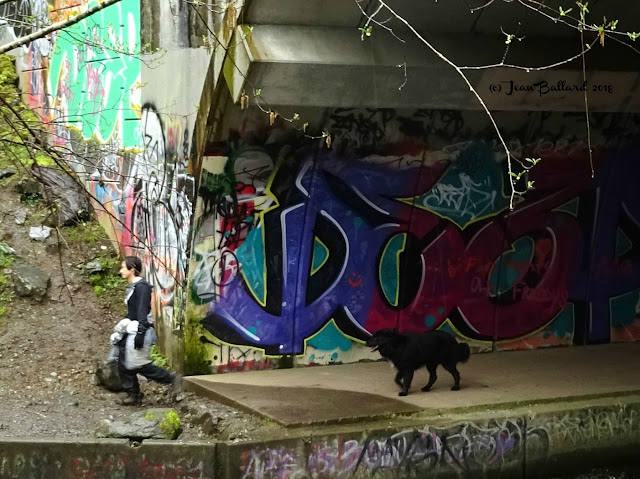 The tunnel was lined on both sides with art work - this was not the swear-laden graffiti of young punks defacing post boxes and bus shelters, but graffiti created by some artists quite talented in their own genre of art.  I must confess I have no objections to this type of graffiti on otherwise boring and ugly cement tunnels. 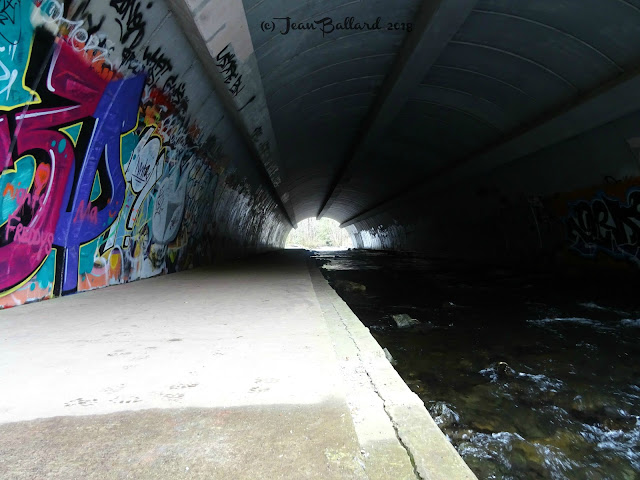 The tunnel, long and unlit, provided artistic inspiration itself as daylight and spring growth at the far end begged to be photographed:

We walked through the tunnel and discovered trails on the other side, but chose to leave them to explore another day - in part because we would have had to cross some very wet rocks to go any further.  Those trails will be better left for summer or early fall, when the water is lower. 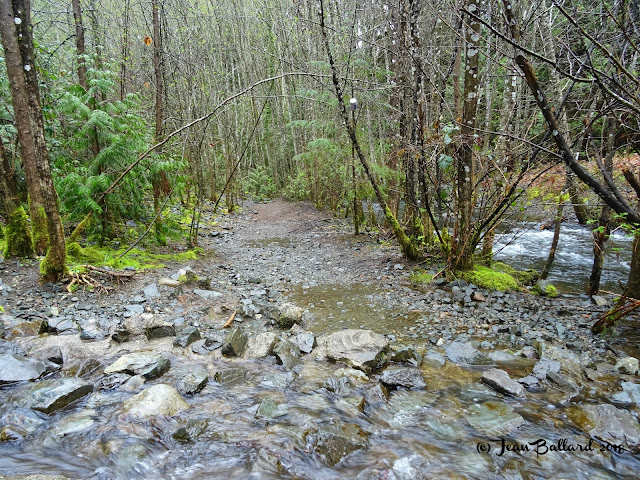 We returned back through the tunnel and up to the main trail, and continued back on the return side of our lake loop.  Along the trail were many trillium in bloom, and down by the creeks and lake was skunk cabbage, aka bears' salad bar or swamp lanterns.


We located one of the lesser traveled trails paralleling the main trail but below it, closer to the Chase River and lakeside.  It was there that a short side trip found us gazing upon large patches of fawn lilies everywhere we looked.  This beautiful cluster was on a mossy cliff above the river:

Eventually, we joined back up with the main trail once again, at a point where a newer footbridge had been built right on top of the old one.  I envisioned frogs and snakes and rabbits making their way across the stream along their own private walkway.

We made our way back to our starting point, where we enjoyed our lunch in the clean, covered picnic shelter while we gazed at the lake and the lightly falling rain.

Both glad we had come, for we were none the worse for the weather and considerably better for the hike!
Posted by Jean at 11:00 PM 3 comments:

No, it's not me!  Sure, there may be days when I move at about the same speed, and certainly there's times when I want to do nothing more than munch away all day long.  But that wasn't the case today.  I photographed this slug while on yet another amazing hike.  The seeds he is chowing down on were put there for the red squirrels by a volunteer at the nature sanctuary where we were hiking.  More to come soon!
Posted by Jean at 9:35 PM 2 comments:

Happy Easter from Jean, Maggie and Allie.
Posted by Jean at 6:26 AM 3 comments: