Morning at the sanctuary - Part 1

(The week before the long weekend, my friend  Nancy and I looked after RASTA, the sanctuary where we have both volunteered regularly since its move here from Alberta almost a year ago.  With Lucie, the owner, away, we alternated staying there for a couple of days at a time, to accommodate our other obligations.  I took the first shift, and thus got to be first to experience the sanctuary awakening, and first to do the chores all by myself.  This entry was written before the morning feeds. Part 2, safe to tell now that Lucie is back home and won't worry that she may have left the sanctuary in charge of  an incompetent nincompoop, will cover the fun of feeding 21 pigs, two donkeys, a mini horse, a giant steer, two rambunctious goats, and numerous opinionated farmbirds. Part 3 will highlight some of my favourite 'magic moments' and favourite photos from my stay there)

It has been seven years this June since I left my own acreage where I woke early each morning to feed my foster family of twelve potbellied pigs and an alpaca, and trek up the hilly pasture with my four senior dogs to watch the sunrise.  I had forgotten the magic those mornings brought into my life, but the memories came flooding back last week as I sanctuary-sat RASTA. Here's how my first morning unfolded:

It is 5:00 AM and I have slept well.  I wander upstairs to put on the coffee. The cats greet me, clamoring for their food as I open the door to the deck.  I feed them and step outside to watch the sunrise through the trees.


Slowly the morning awakens.  Bob the Rooster crows his wake up call, and Splash the Duck mutters to himself as he waddles across the lawn.


The pigs, except those in the seniors' pen who are still fast asleep, drift out to the pasture with the donkeys Romeo and Tango, and Theo the steer, and Toby the mini horse.  They graze on the new shoots of grass as they occasionally look my way to see if I am ready to feed them yet.  Simon and Garfunkel, the goats, bleat their greetings  and run out to join the others, jumping and head butting as they go.  They take joy in each and every moment, so glad to be alive.


I return inside to my little bichon frise, Mitzi, and take her out the back door to do her morning business. She moves across the lawn like a hound dog, nose to the ground, body quivering ecstatically with all the new smells.  She is a farm girl at heart, despite her 8 pound, fluffy white Princess exterior.  She raises her nose and one paw, in pointer fashion, as she watches the ducks move across the grass.  I'm unable to capture it well with the camera as I must watch Mitzi like a hawk whenever she is outside here, lest the hawks (or owls or eagles) swoop across the field and snatch her up for their breakfast.

As I sip the last of my coffee, two squirrels come out to inspect the farmbird dishes for any seeds that might be left from the night before, and a bird flies off with duck down in its beak,  ready to feather its nest.

The cats join us, saying good morning to Mitzi nose to nose.  Roxie is particularly fond of Mitzi, rubbing up against her repeatedly, claiming her for a new BFF.  Mitzi seems amused by this, not in the least alarmed despite being familiar only with my own cantankerous tortie cat who is as likely to attack her as befriend her. Roxie purrs and rubs herself along Mitzi's other side.

At last, coffee gone, I put Mitzi back in the house and prepare the morning feeds.  It takes but one motion of the scoop into the large bin of pellets for the senior pigs to shake the straw from their backs,  and for the junior ones with their equine friends to come racing in from the pasture. Breakfast is about to be served!

Oh My! Forty-five days and counting!

I have such good blog readers - they start poking me when it has been too long since I blogged. And the poking started a few weeks ago. By this week, the pokes were leaving bruises, and the thousands of photos and tales piling up were screaming "Share us!"  Why the long absence? Have I really been that busy?  In the words of Henry David Thoreau,

“It is not enough to be busy; so are the ants. The question is: What are we busy about?”


Well, let's see.  I've done some amazing hikes - lots of them, to lots of new places.  I've looked after a friend's cats, and next week I'm looking after horses.  I've looked after the sanctuary for several days while the owner was away.  I had visits from my daughter and son-in-law, and from my friends Del and Mark and MollyDawg and Lady May (King's family).  I've done my usual volunteer work.  And I've taken thousands, possibly ten thousand, photographs. Can you imagine how many photos I took just while staying at the sanctuary surrounded by nearly fifty animals of ten different species? 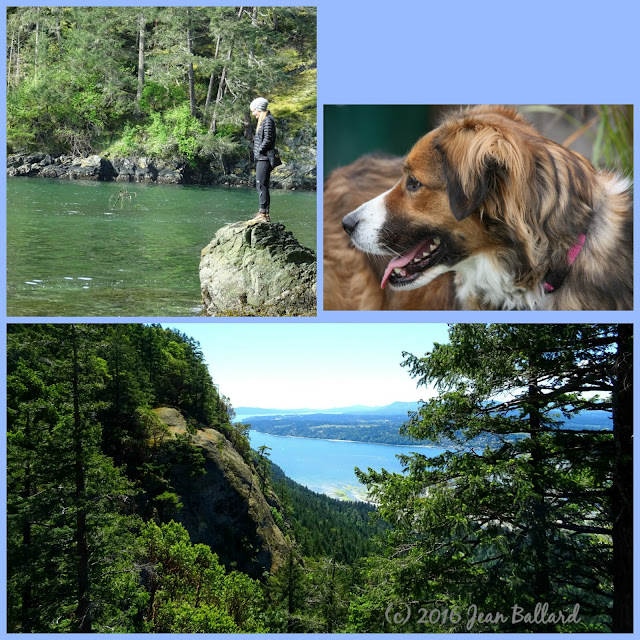 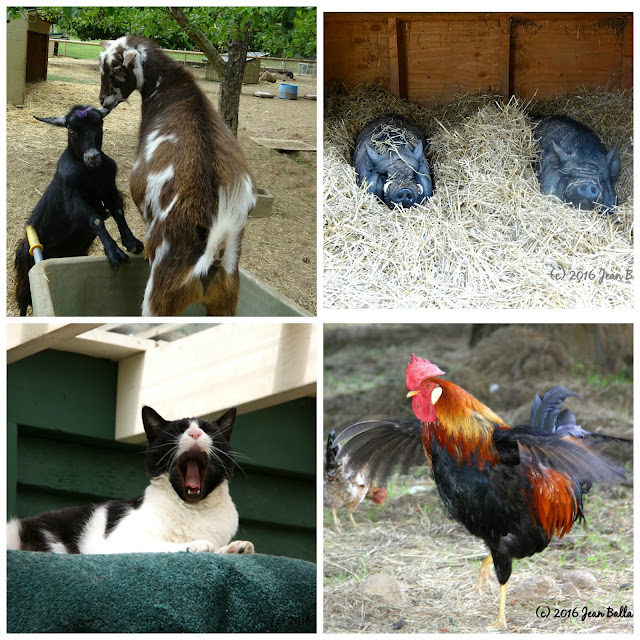 Oh, and I completely renovated the back yard.  Well, I hired someone to help with a few of the heavier or more skilled aspects, but I did most of it myself.  And I was hell-bent on getting it completed before the really hot weather arrived.  You may remember I had a major drainage job done a couple of years ago, installing a rock pit and drainage pipes to reduce the flooding that occurred every winter.  Then, the same year,  I added a bed next to the shed, and some raised boxes for square-foot gardening on the other side of the yard (an experiment which turned out more costly than buying the produce at the local market gardens, especially when Eddie delighted in helping his greedy-dog self to the peas and cucumbers and squashes and beans, and the raised beds started slipping down into the neighbour's yard).


So by the end of this winter, things were looking rather sad.

And in the course of five weeks, I salvaged as many plants as I could, obtained a few more bushes and trees and fast-growing perennials from generous friends, reduced the grass area by two thirds, brought in five yards of bark mulch and three yards of road mulch, had a retaining wall built in the back corner where the property was sliding into the neighbour's yard, added some landscape ties, and transformed the yard to something that I hope will bloom and grow and within a couple of years provide the naturescape that I miss now that my ocean view is gone. It was challenging working around drainage pipes, sewer pipes, and rock pits, but already, I have a plethora of birds calling my renovated yard home. 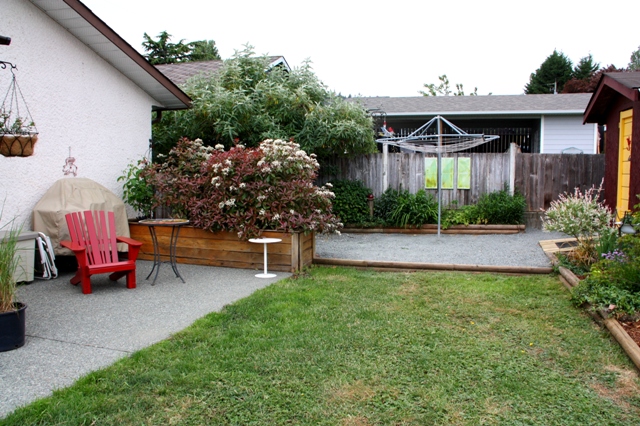 Of course, I didn't stop there.  Having watched my hired help build one retaining wall, I decided to tackle a second one myself, on the side patio where the neighbour's yard sometimes fell into mine.  I forgot to take a photo before replacing the flower boxes, but I was pretty happy with how it turned out overall. That patio extends from my dining room and has always been one of my summer joys with brightly coloured flowers and winter woes with mud. 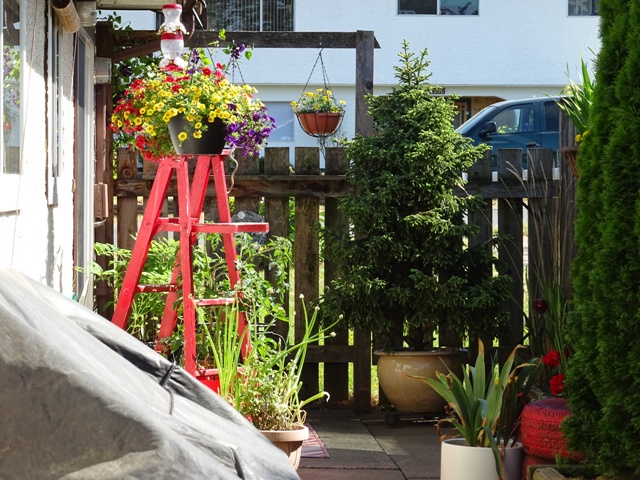 And now, because I keep telling friends "I'll blog about that", I really better get back to editing some of the many photos I've taken the past forty-five days so I can share those hikes and animals and visits with you.  Thanks for your patience.