Last week my mama took me for a hike at Swallowfield.   She didn't tell me she wanted me to meet her friend's new dog.

Well, he's not really a dog yet, he's just a puppy.  A fifteen week old pomeranian puppy named Cosmo.  A very very very very active puppy.  He likes to jump on me (I didn't like that and told him where to go!), and he likes to jump on the leaves and the grass and the bugs and the water and shoes and mud and, well, just about everything.  My mama sez he is just doin' what puppies do.


Some people we met thought we looked a lot alike - like he was maybe a mini-me.  Dunno why they thought that - anyone can see I'm much handsomer than he'll ever be. [Jean:  EDDIE! Be nice!]

Mama took her big camera. And then all she did the whole time we was hiking was take pictures of the puppy.  So - spoiler alert - here come a ton of puppy pictures.  I don't know why people think puppies are so much fun.  They look like an awful lot of work to me.  I'm glad mama only adopts us old dogs.  Here's Cosmo playing in the leaves: 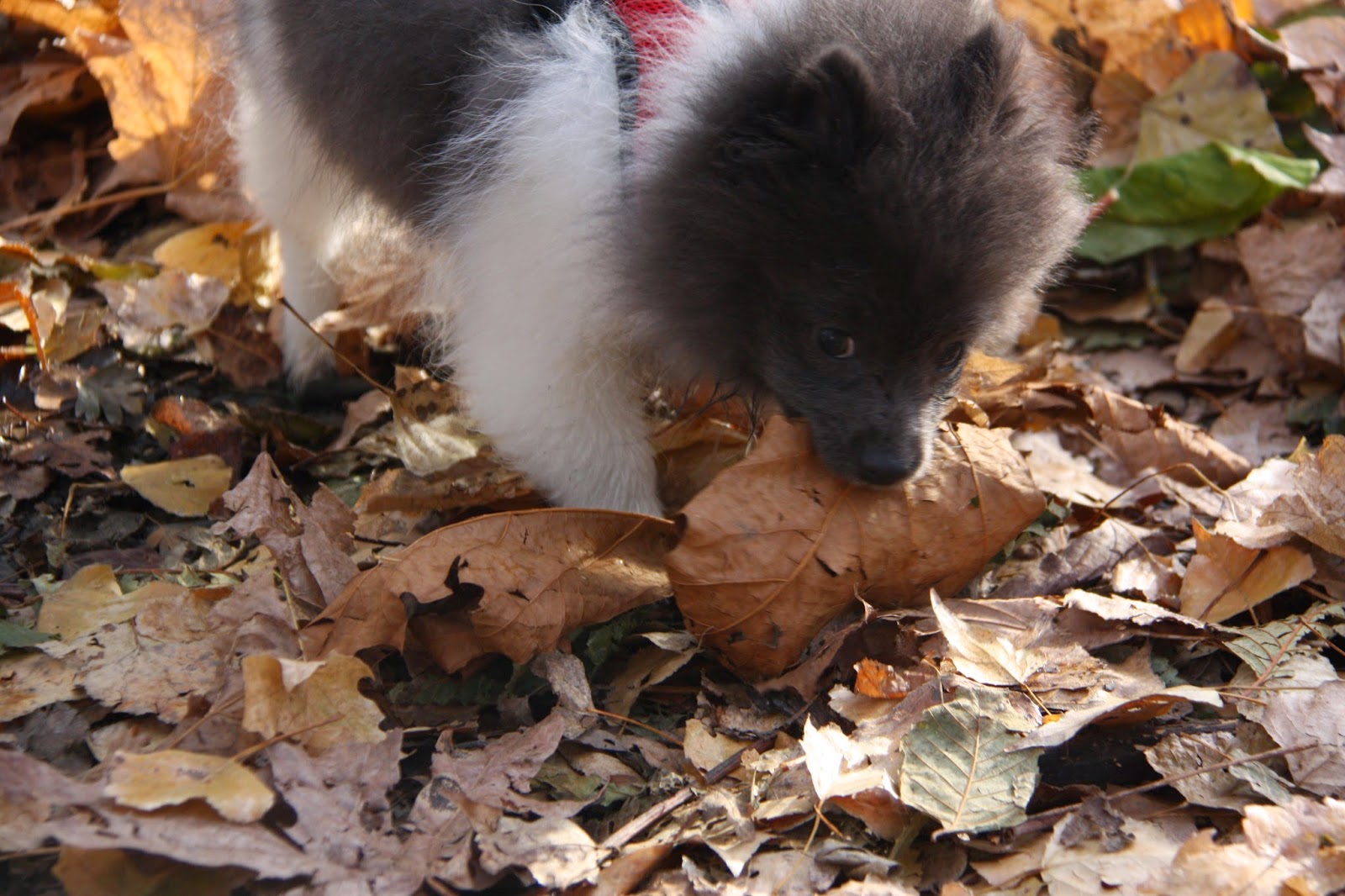 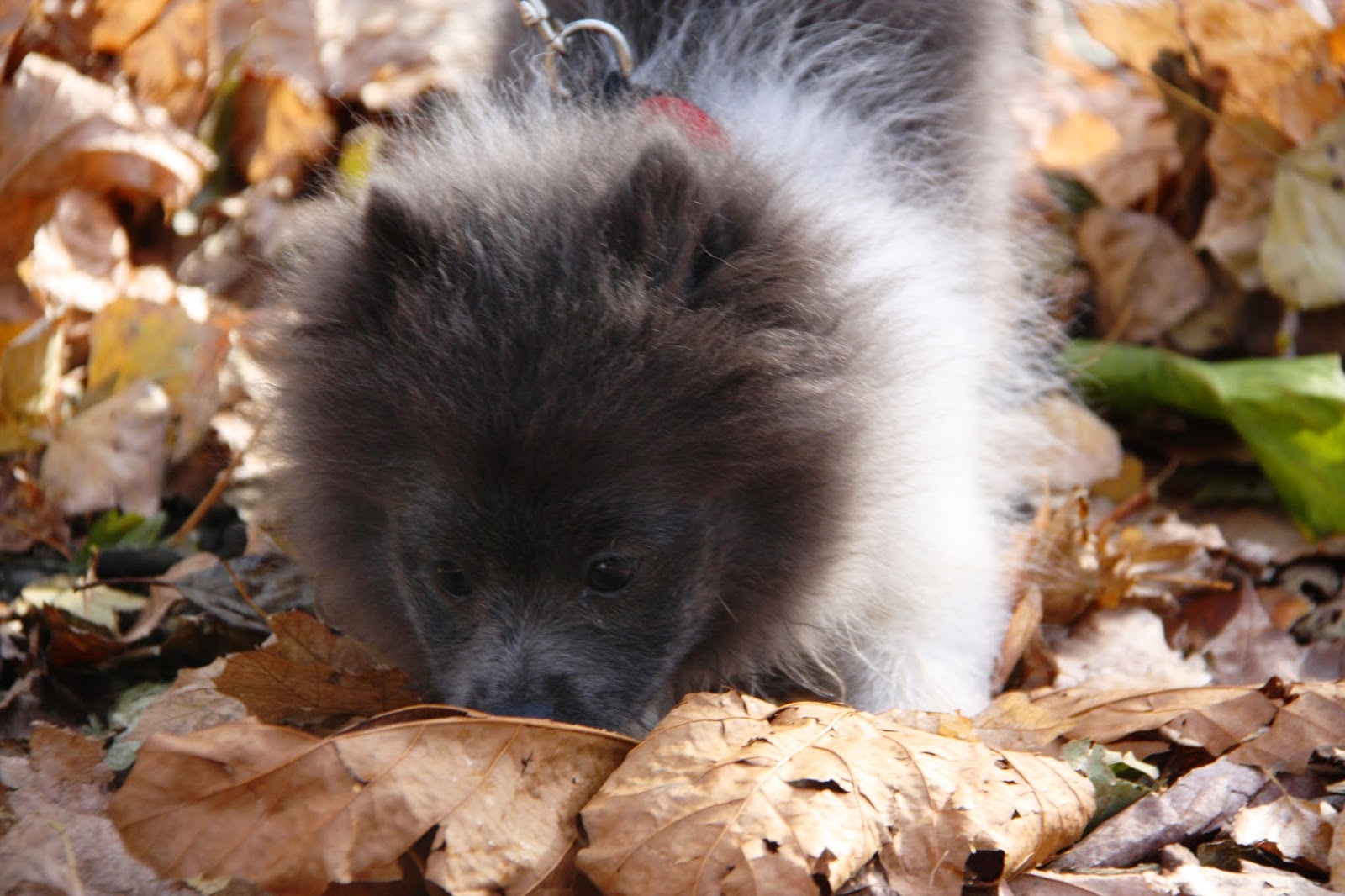 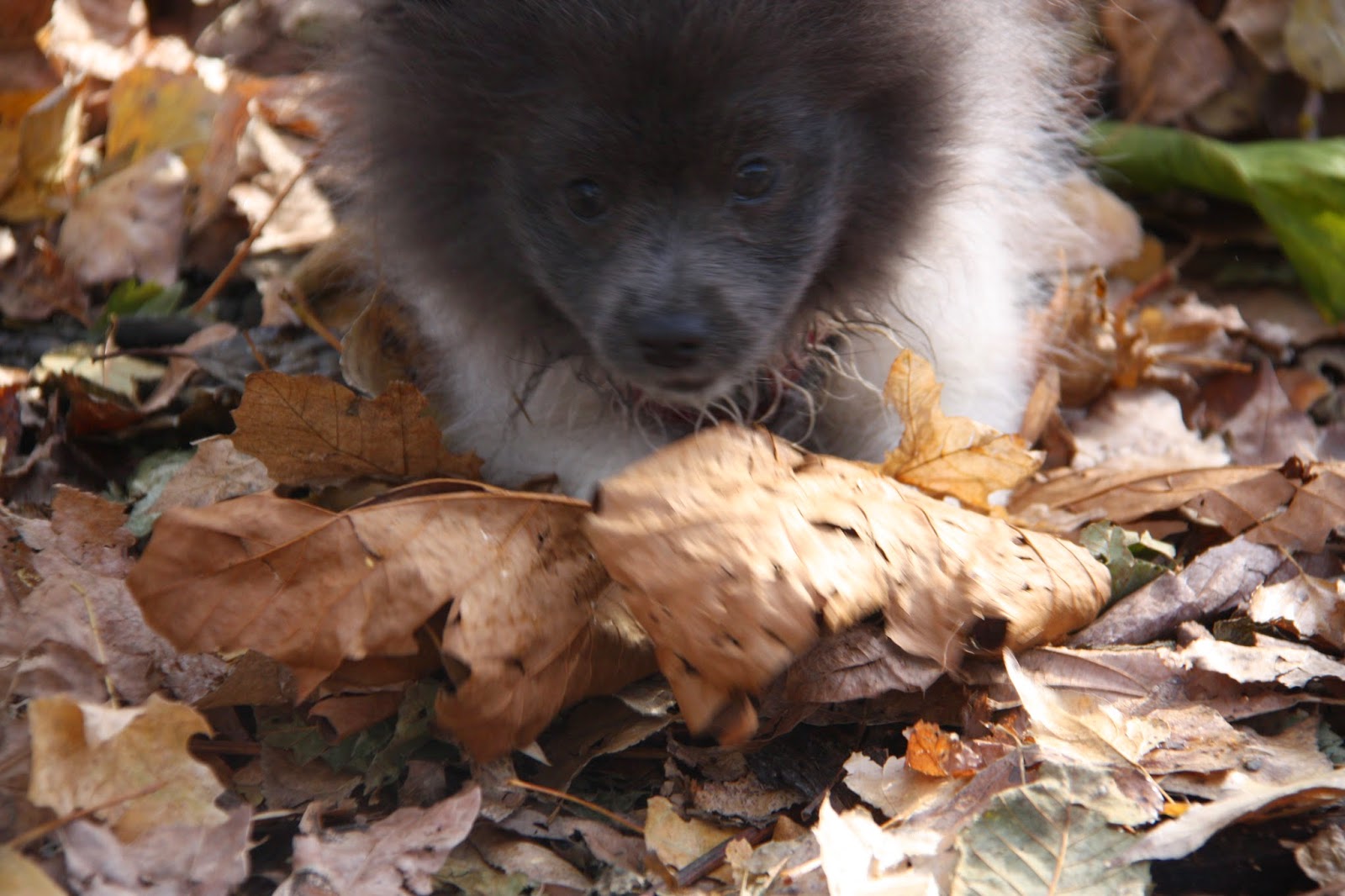 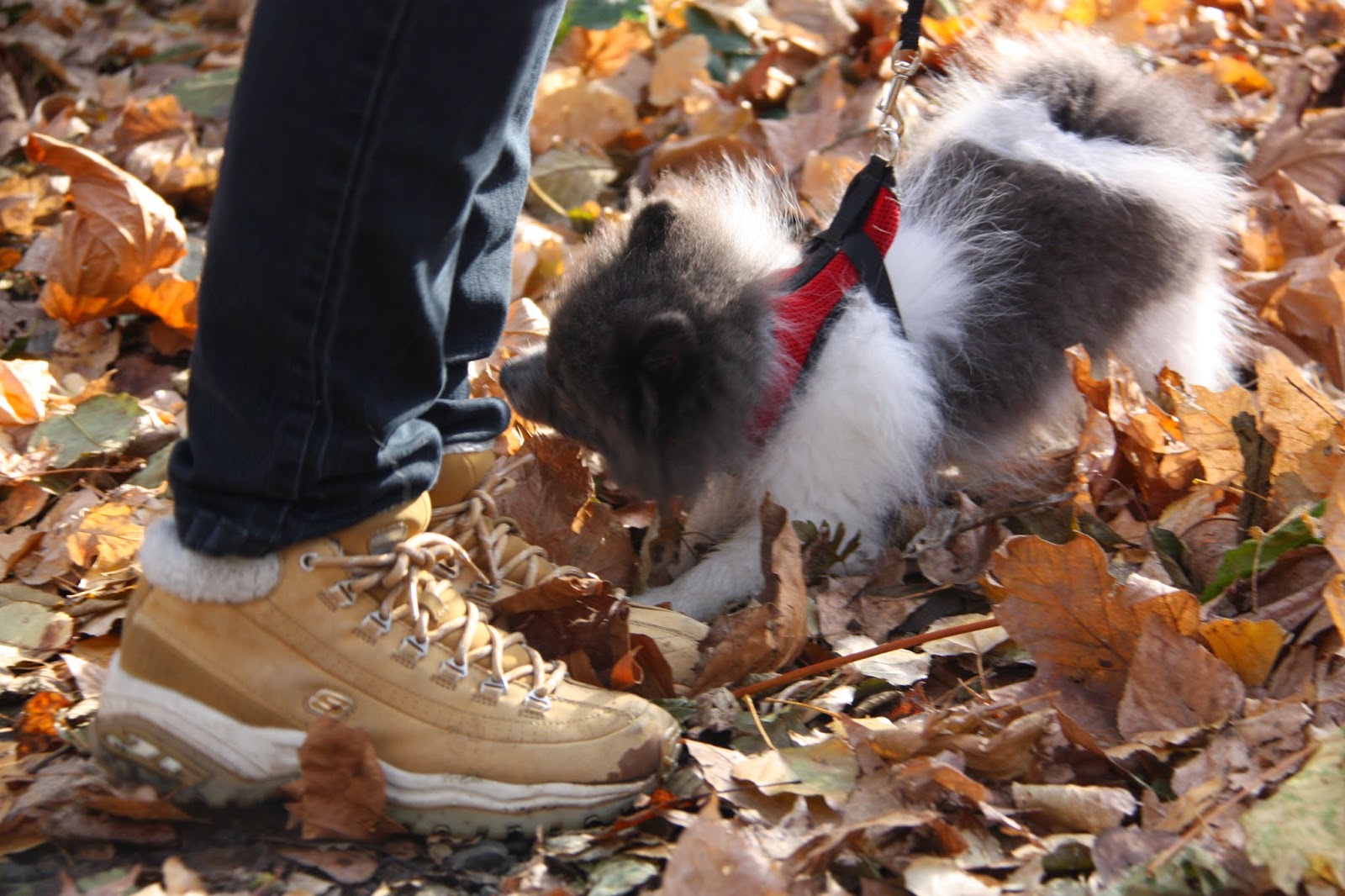 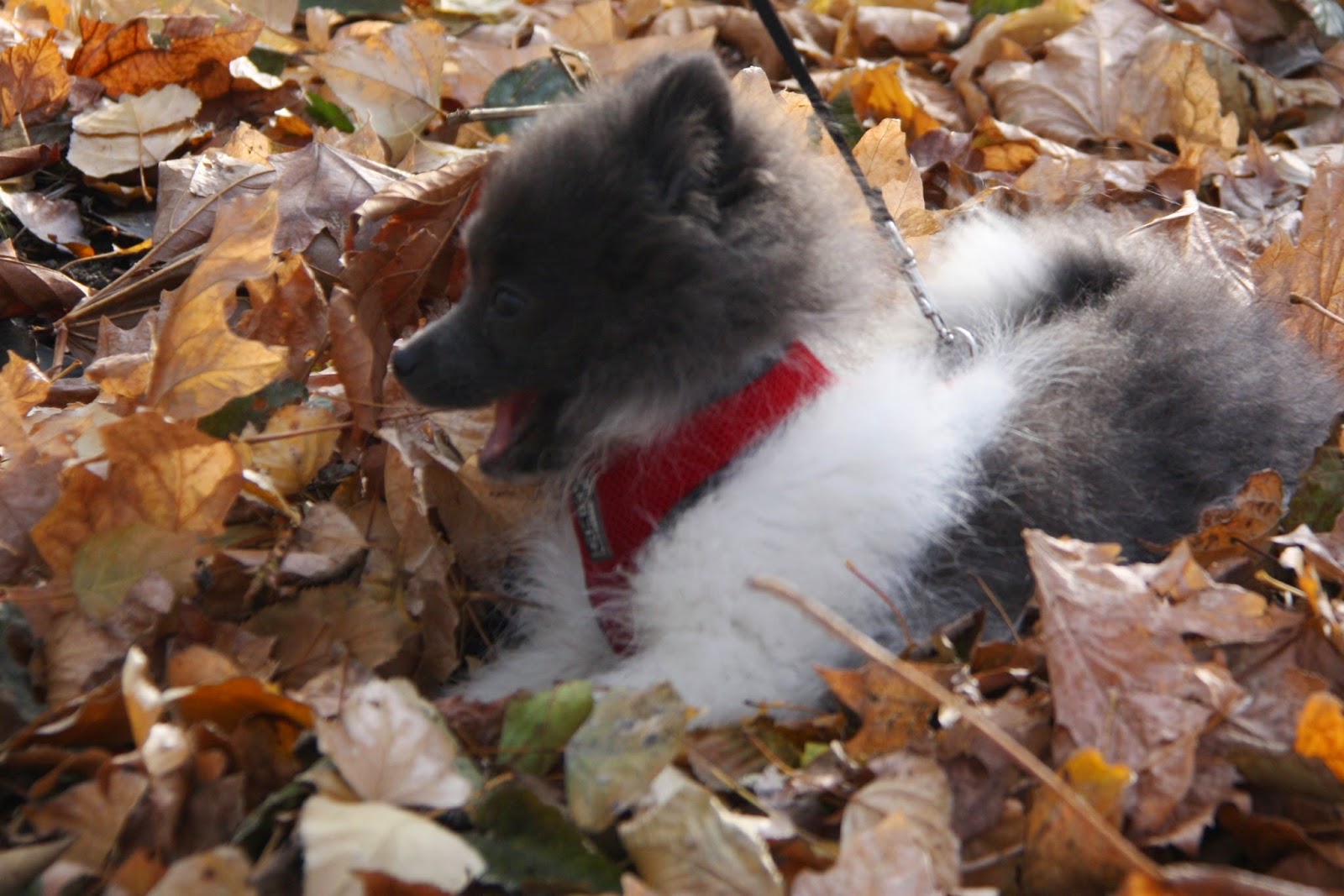 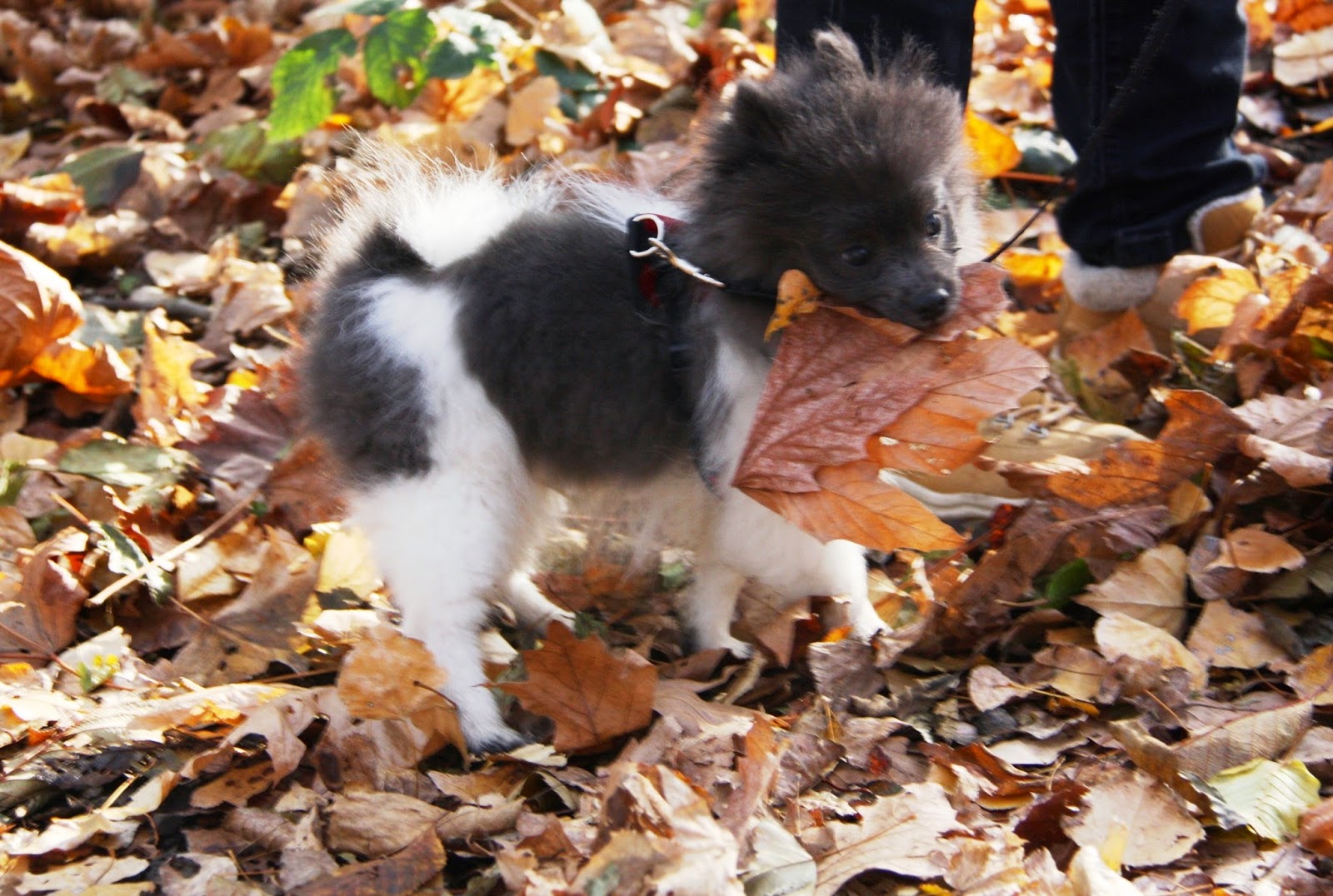 And here's Cosmo doing other stuff, like stalking shoes, and looking at the water, and posing : 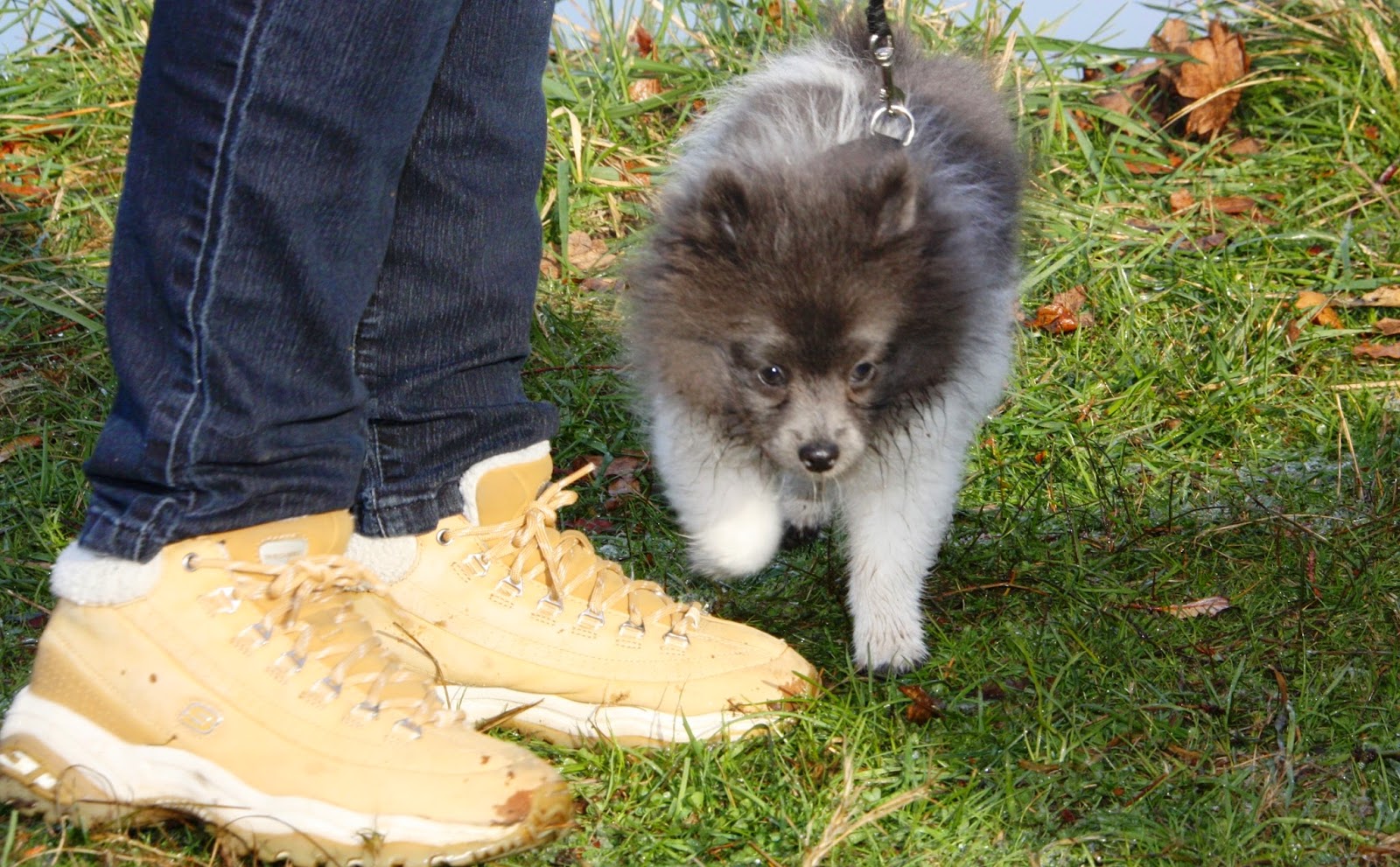 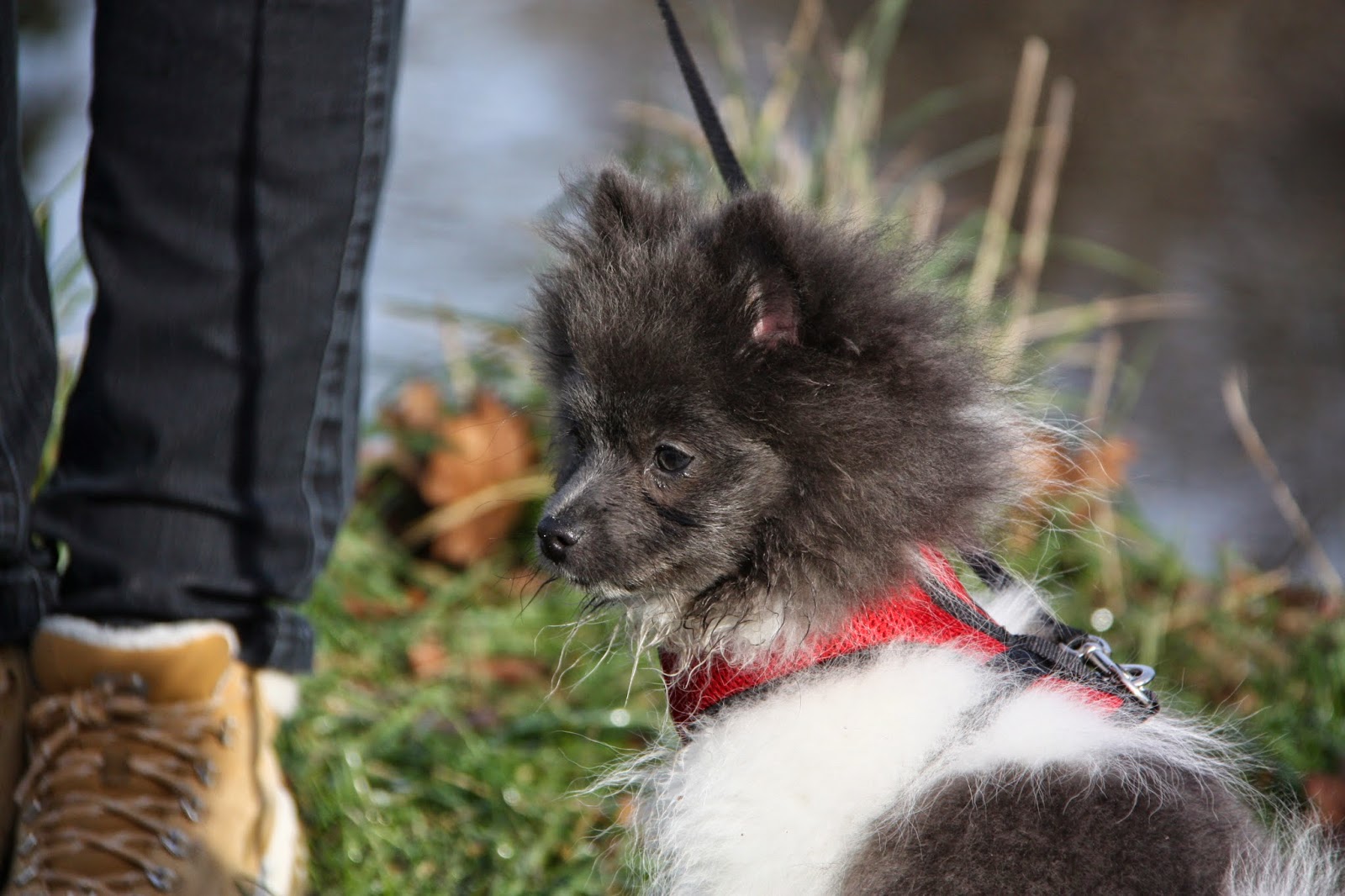 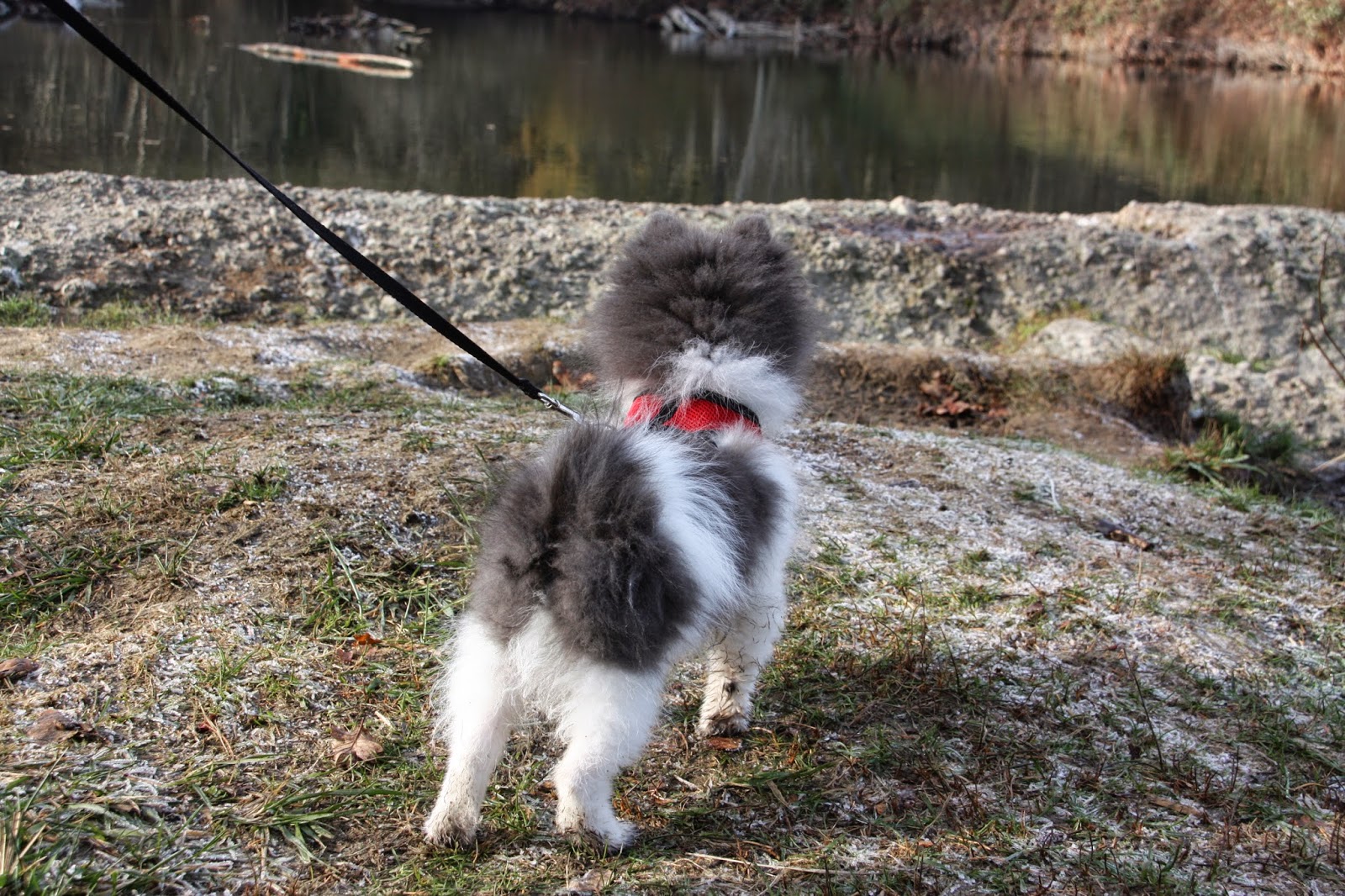 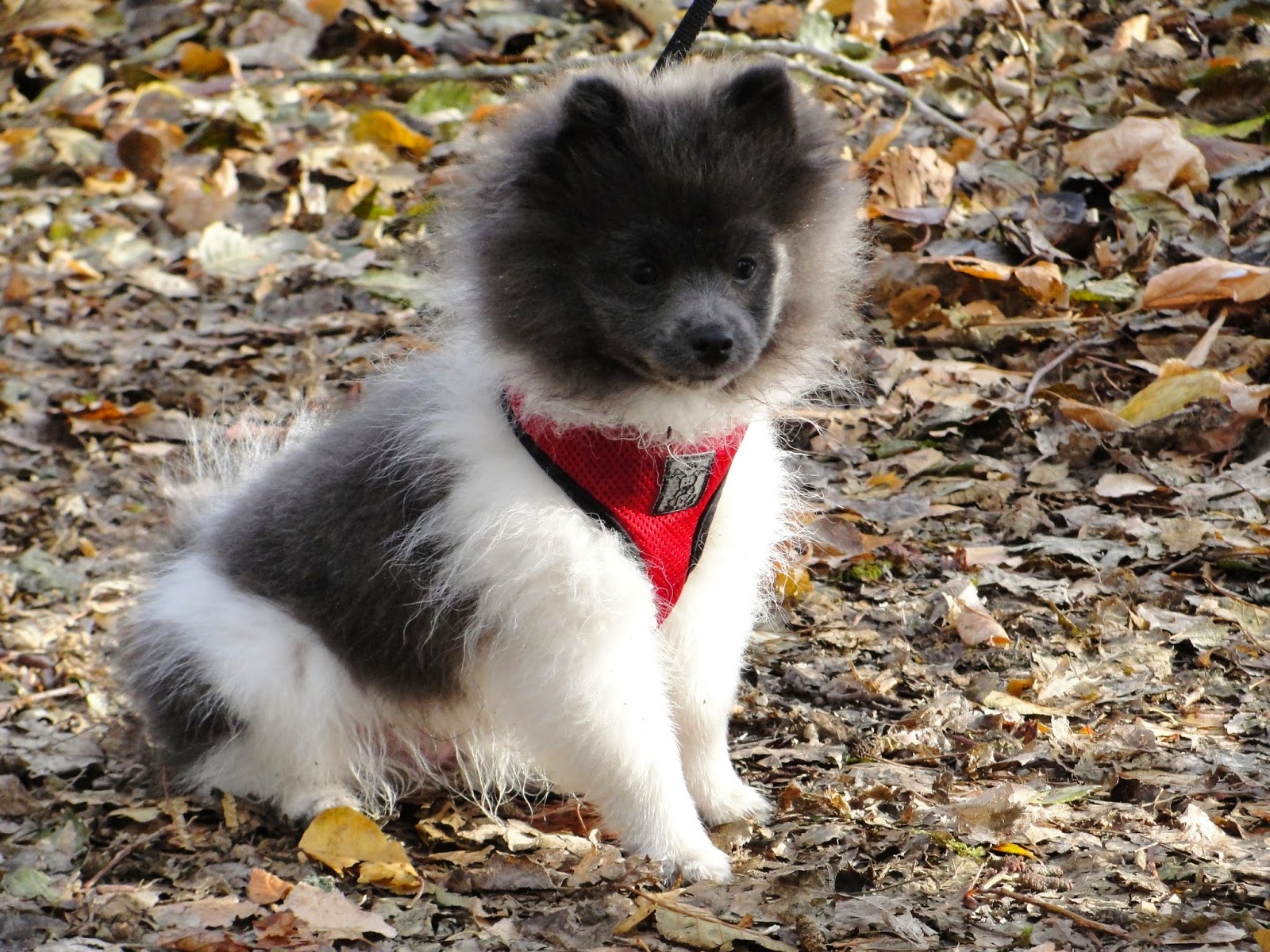 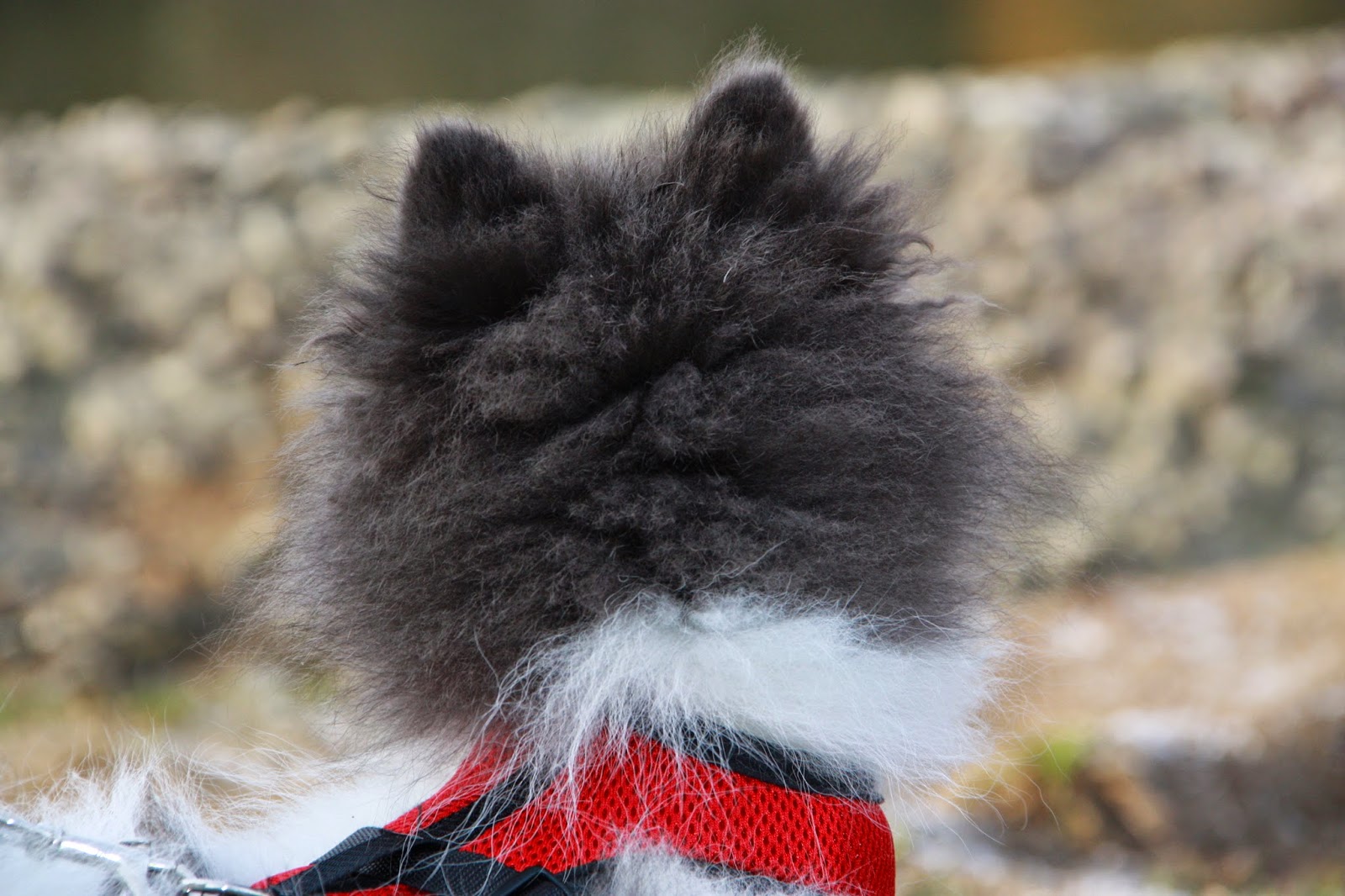 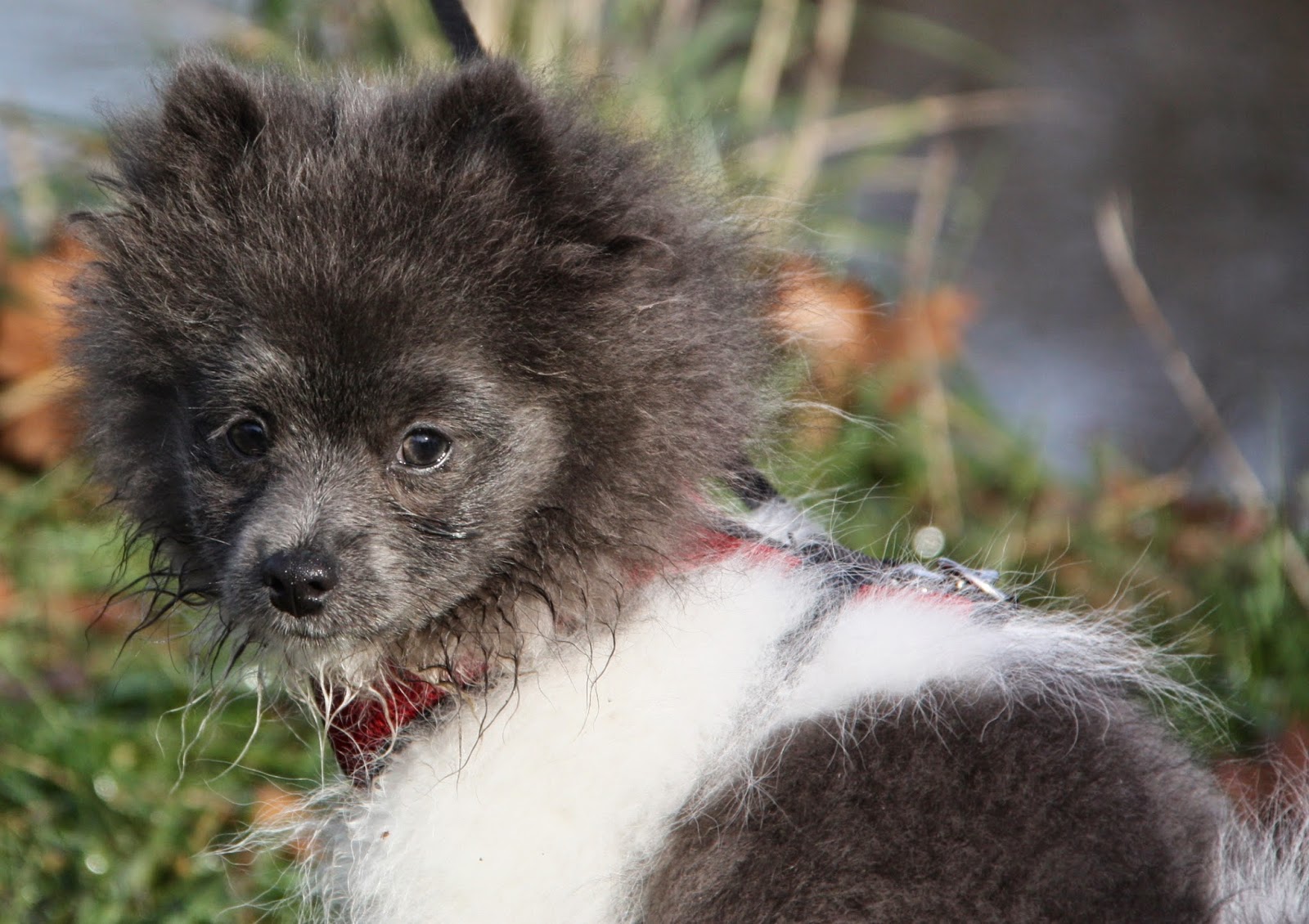 Mama did take a few shots of the scenery, and of an eagle that thought Cosmo might be the perfect size for a snack: 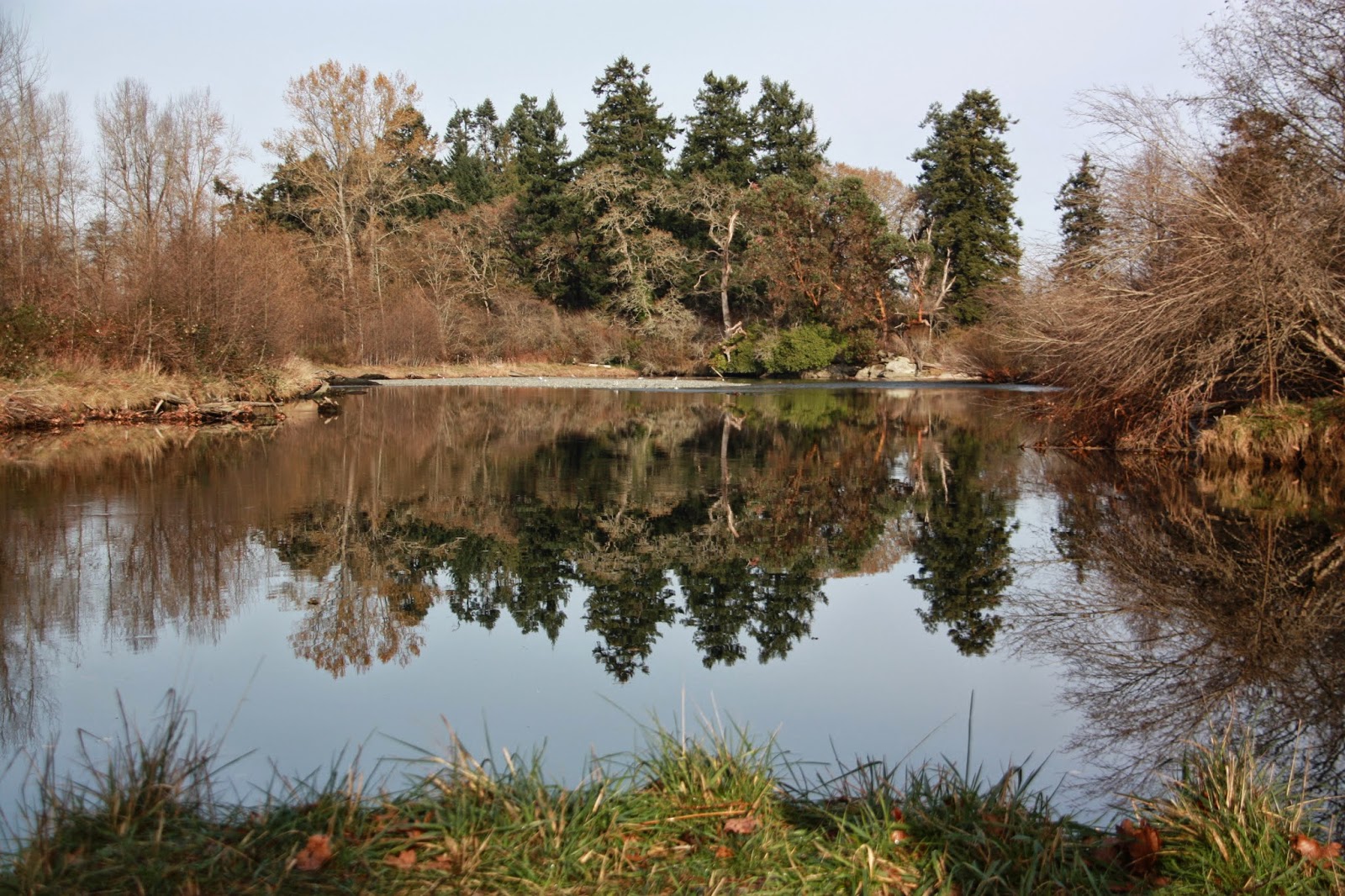 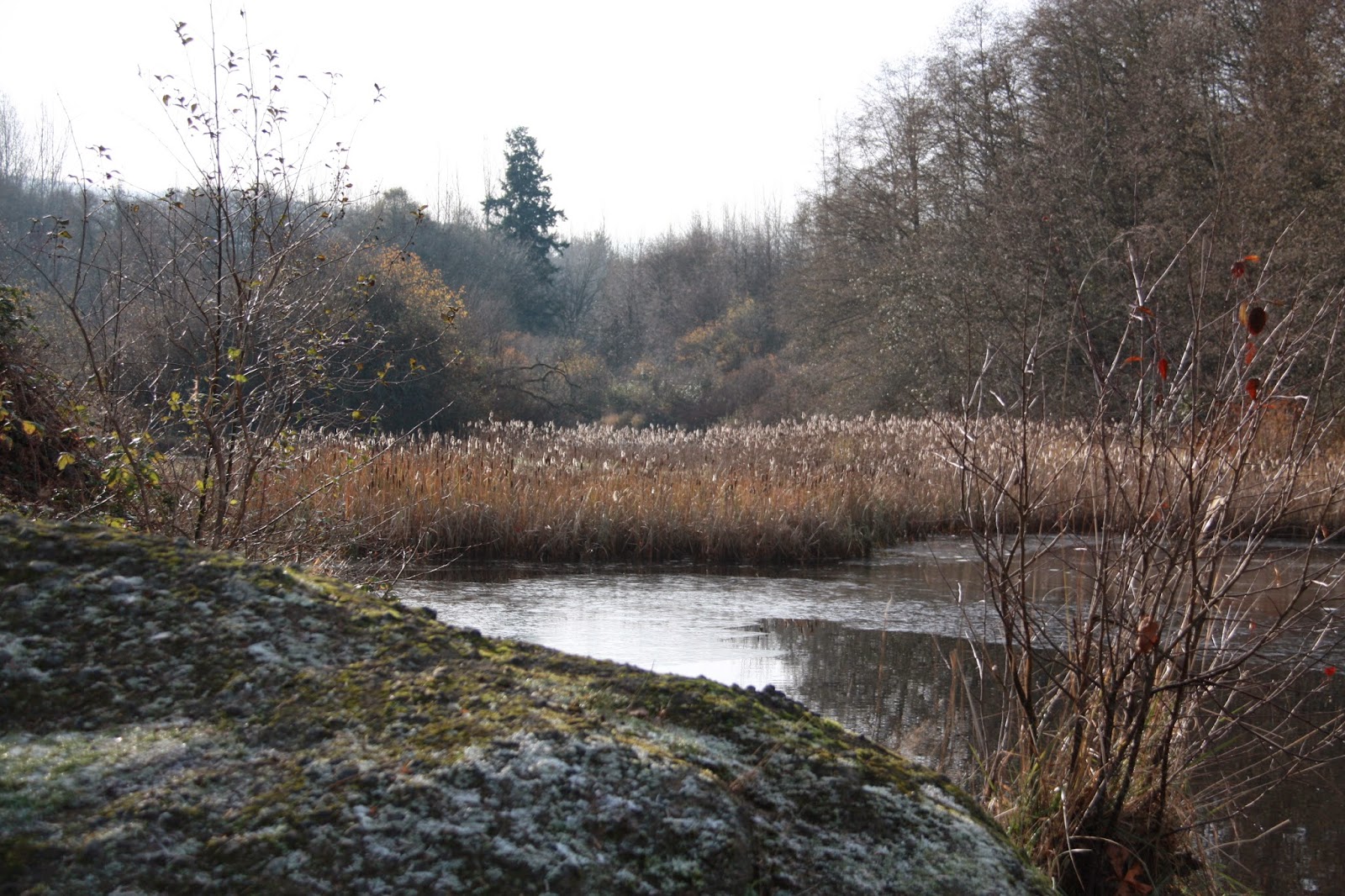 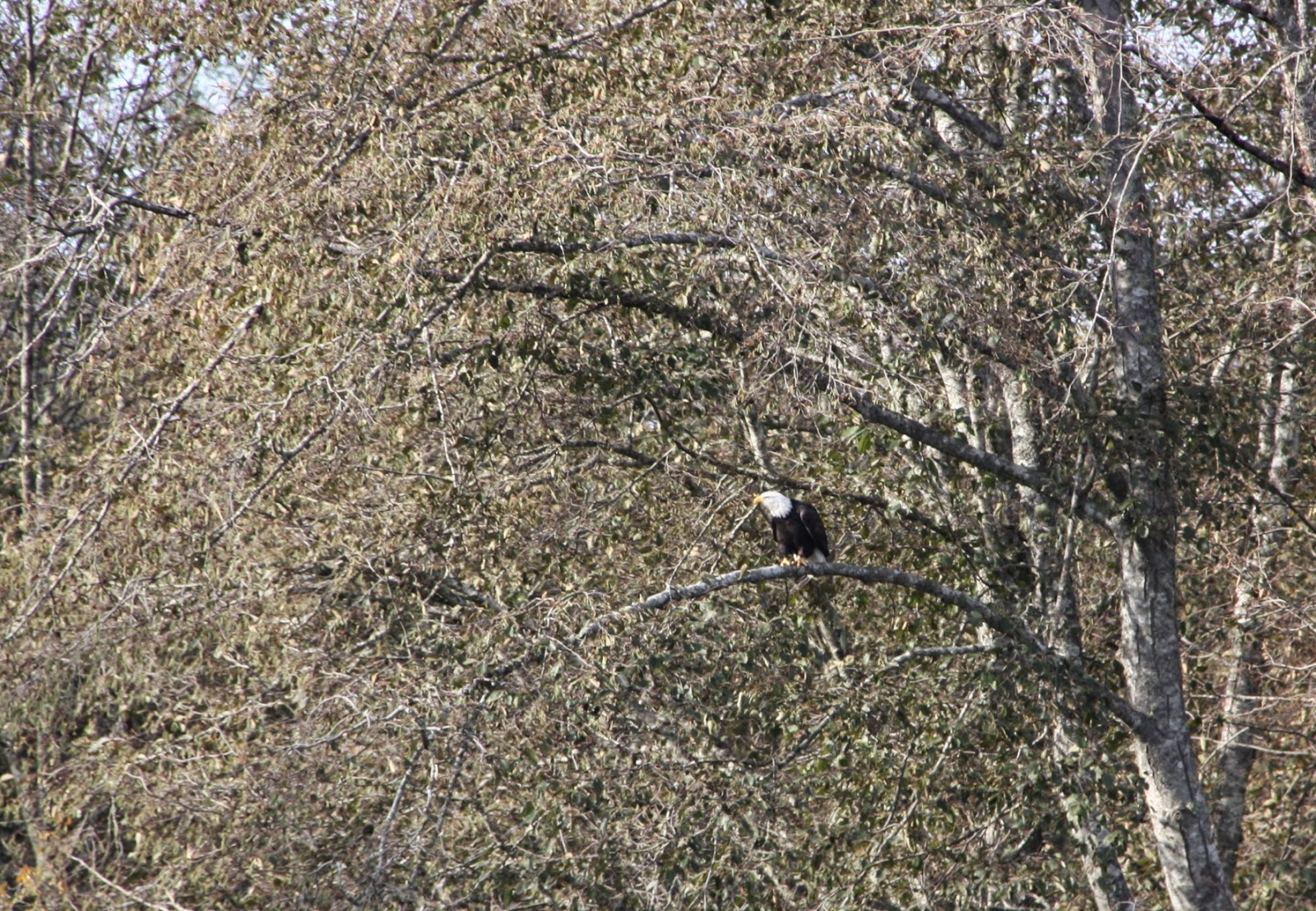 Then we headed back to the cars, where Cosmo had to be dried off with a towel.  He was feeling pretty tired by then: 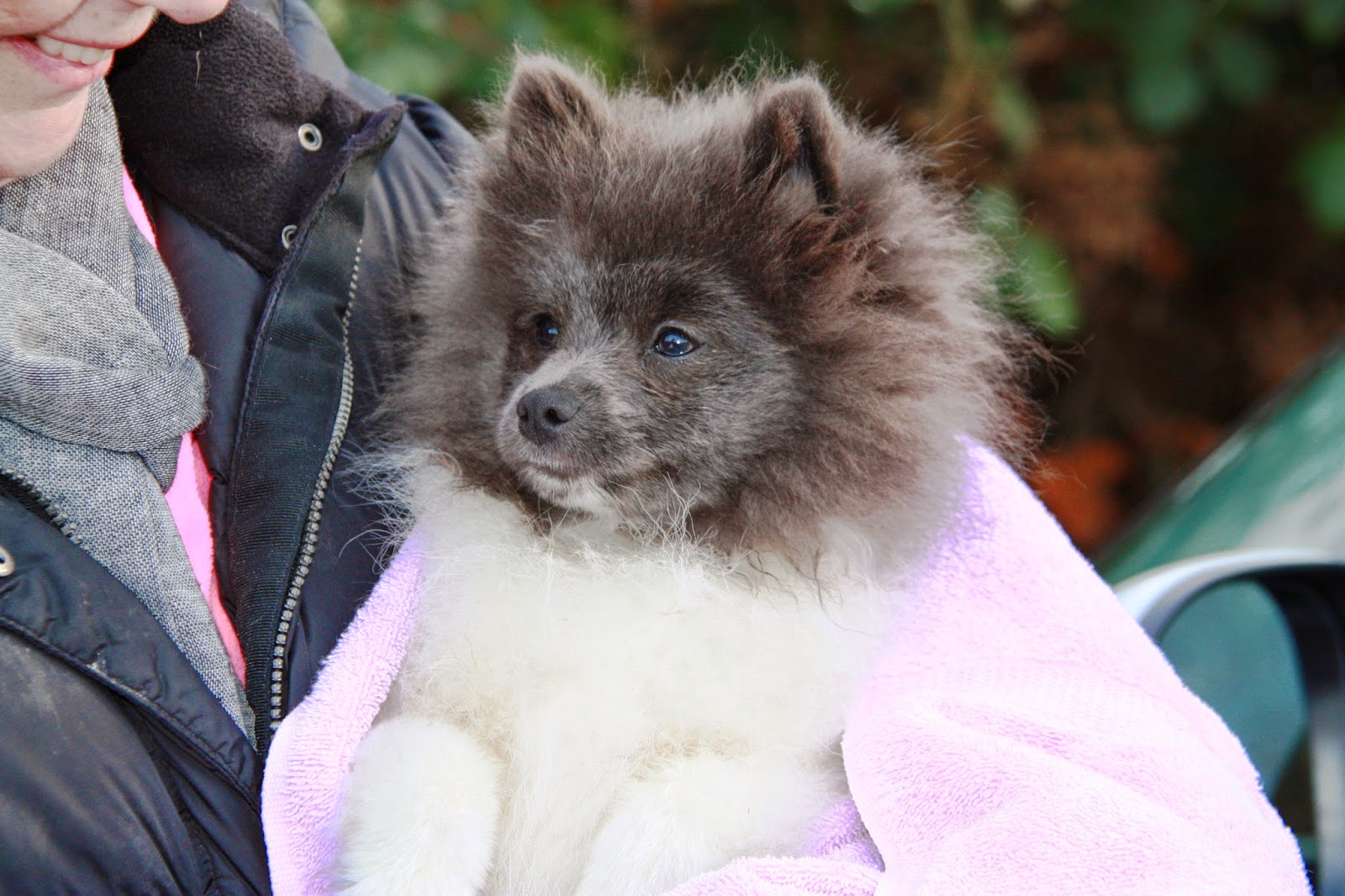 But I saved the best picture for last:

....Is a home of her very own!  This is Lucy the beagle mix, and she is looking for her forever home in or near southern Ontario, Canada.

I don’t usually profile out-of-province dogs here – heaven knows there are enough dogs in rescues and shelters right here in BC.  But Lucy has been in foster care for 528 days and counting – yes, you read that correctly.  Five Hundred Twenty-Eight Days.  A dog-forum-friend of mine just north of is fostering her for Speaking of Dogs rescue.  And the rescue, the foster mom, and Lucy really, really, really want to find her forever home by Christmas.

So I said I would help.  About 10% of my blog readers live in .  And  while 70% of my blog readers are in BC,  I bet at least half of those know people in . And even if those readers and friends can’t take on a dog, they also have friends in . You tell two people, and they tell two people, and so on and so on and so on.  And somewhere, somewhere among the 12 million or more people in (or within a short distance of its borders) is Lucy’s forever home.  They don’t have to live in , but Lucy can’t be shipped so they need to be close enough (within a few hours drive) for the home check, the transport, the follow up.

And,  like any responsible rescue, they are looking for the RIGHT home for Lucy.  Someone who has done their homework, read the information, has the right home, has the commitment, is willing to work with her.  In return, Lucy will give them tons of entertainment (just check out the videos on her facebook page!) and love.

My name is Lucy, and I've been in rescue for WAY too long. Will YOU take me home?
I’m a 7-year-old spayed female Beagle mix who weighs in at about 45 pounds. I was given away by the only family I ever knew May/2013 because they were having a baby. It was a sad day, but I guess I'm glad I didn't have to live with a baby!

My foster parents say I am a good problem solver. I love my puzzle toys and Kongs. I’m a thinker and really thrive when I am kept busy with training and learning new things. Nothing makes me happier than the sights and scents of a trail hike. I need an owner who enjoys keeping up with my superior mind!

My foster parents say that I have the cutest wiggly greeting they've ever seen. I, of course, need to be holding my ducky or rabbit for the full effect. A favourite past time is balling up my blanket and sucking on a big chunk of it. You can see all the endearing things I do in the pictures and video on this page.

Even though my good points definitely outweigh the so-called “bad” ones, there are a few things my new people need to consider in order to ensure we are a good match:
Dogs and children make me very uncomfortable, so I need to be in a home where there are no dogs or children younger than their mid-teens. I've been cat tested, and my foster parents said that I got a little too crazy to be able to live with one - but gosh I wish I could! (It would be so fun... for me, anyway)
I’m still learning that dogs aren’t as bad as they appear, but they still upset me, so it’s important that my new person is able to help and protect me rather than punish me if I become upset or flustered. Whoever wants to take me home has to be ready to help me with this issue and go about it the right way - I know it can be frustrating to have a dog who barks and gets upset, but I'm just trying to save myself from those who frighten me!
A house would be the best place for me; I don’t bay like a hound and I certainly don't bark excessively, I will bark if I hear activity outside the window. I don't have any troubles with separation anxiety right now, but I used to, so my new forever people will have to help me transition into my new home.
I have two medications that I take daily, the total cost per month is less than $50. No big deal!

I’ve been waiting a long, long time for a forever home. Will you be my "happy-everafter"?

If you are interested in meeting me you can email (Lorraine@speakingofdogs.com) or Emily (emilyannefisher@gmail.com) for an application.


So let’s see if we can’t help out my friend Emily and her foster dog Lucy by spreading the word.  Send a link to this blog page to everyone you know in or who might know people in , or share Lucy's facebook page and ask your facebook friends to share too.  And if you are part of a rescue organization, will the director give her a courtesy post? They can share her photos from here, share her facebook page, or send a message to the links below and the foster mom will send a bio and pictures.

Let’s help Lucy get the one thing she really, really, really wants for Christmas.  It’s not two front teeth.  It’s simply a forever home.  And it is out there waiting to hear about Lucy. Help spread the word.
Where you’ll find out more:
Lucy’s facebook page:  https://www.facebook.com/Lucyneedsahome 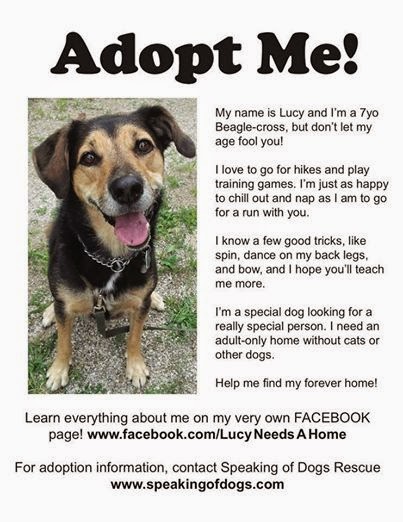 Teach the children about the realities of war, not the glorification of it.  Only then will the next generation look for other ways to resolve political and religious differences.

Teach the children the skills they need to live in peace.
Posted by Jean at 8:24 AM 4 comments:

The Many Faces of Huli (and other canine friends)

Just over a week ago, I attended an open house at our little Crofton Old School Museum.  Two friends of mine, Liz and Robyn, were doing book signings there for recent releases of Chicken Soup books that contain their stories.  The proceeds, along with that of a silent auction, went to support the museum.  I took photos of the event (which can be viewed on my facebook page), but as so often happens when I attend dog-friendly activities, I took more photos of the dogs than of the people.

There was PJ, a handsome, friendly dude whose tail never stops wagging and whose ears can go every which way, but mostly stand straight up:

There was Sophie, a sweet little girl whose ears always hang low, framing her face like a well-coiffed hairdo:

And then there was Huli.  Huli lives with my friend Mary, who also happens to be my neighbour across the street.  And since I told Mary I'd have the photos up "in a day or two" nine days ago, and I'm counting on her to feed my dogs tomorrow while I drive down to Victoria for an appointment, I figure I better not procrastinate any further on blogging about one of the best, funniest, cutest, craziest, friendliest, happiest dogs in town.  Huli makes me smile every time I see her. She is 100% wiggle butt. But she doesn't much like a camera in front of my face.