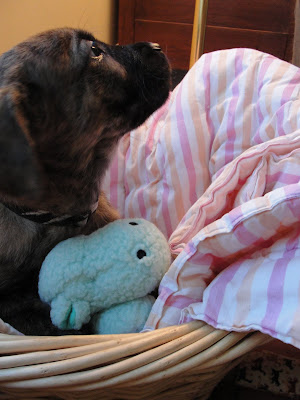 Acorn
Acorn is a small pup with his mom's short stumpy legs. He has a perpetually worried look, and whether due to real wrinkles or the impact of a fair bit of grey in his brindle, he reminds me of a little old man when he sleeps. He has white tufts of fur on one of his back paws, and distinctive brindle stripes on his belly and sides.
As the quietest and most sedate of the pups, he’s been a bit hard to get to know. At times he comes over to me and whimpers to be lifted up, but mostly he keeps his own counsel and blends in with the pack. He sometimes initiates play with one of his siblings, but when the others rush over to join in, he bows out. He's easily overwhelmed with the mob scene and has the sense to quietly slip away.

He isn’t too sure what toys are for, but he proudly parades around the pen, head held high, waving large sheets of newspaper grasped tightly in his mouth.

For his photoshoot, he sat quietly in the basket without attempting to climb out or explore, and outside he had to be coaxed to move. But after I talked to him in an excited highpitched voice and ran around like a crazed woman, Acorn did engage in some running and chasing and seemed to be having fun.

Acorn would like his future family to know that he will try to be a good boy no matter who adopts him, but he would really like some quiet gentle people to nurture him and teach him life skills – noisy, rambunctious kids might be a bit much for this lad. He does like to have a little company, and he thinks he might be happy with another canine or feline sibling around as long as they were mannerly. And like the polite little guy that he is, he thanks you for your consideration. 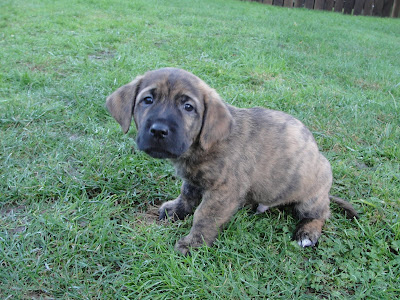 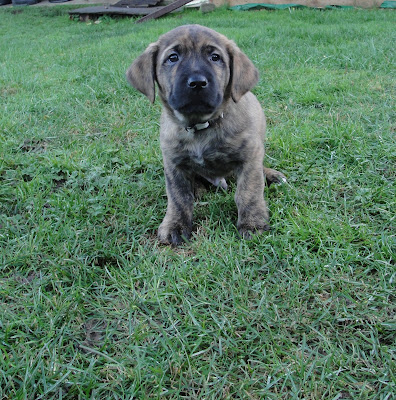 Wait! Where you goin'? 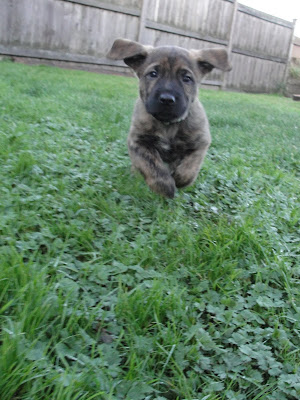 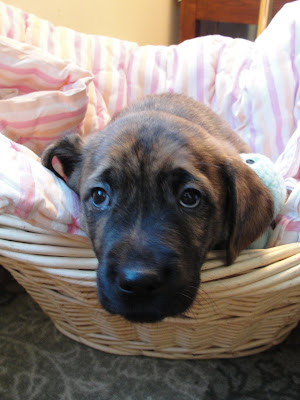 I likes peace an' quiet 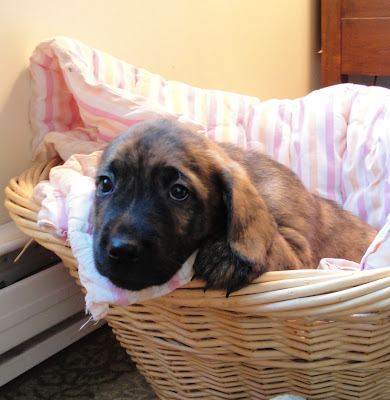 May I go back to my pen now, please?

(Acorn is one of ten pups I am fostering for the Cowichan and District SPCA. Each is featured in a separate blog entry. The pups and their mama, Lucy, will be available for adoption shortly. All applications should go to the

Cowichan and District SPCA. More information on Lucy and the pups can be found by reading the past two months' blog entries - starting September 11/2010 for Lucy, and October 1/2010 for the pups. If you are considering adopting Lucy, feel free to email me with any questions you have about her personality and behaviour, using the link on the side of this blog).