In case you were wondering.....

I've been gaily responding to emails for the last several days, only to find that my outgoing email is apparently not - not going out, that is.
So if you are wondering why the heck I haven't responded to your very important or very funny or very friendly email, that's why.
I have no idea how to fix it.  It says it has been sent.  It just never gets received.  Somewhere in cyberspace there are a lot of emails floating around. All from me.
The hotmail contact via the blog (see button on side) is still working, as is my facebook, so use either of those options if you need to get hold of me.  It is just my primary email (the Shaw one) that is defunct.

The noses at Hearts on Noses

A few more pics from my last trip to Hearts on Noses.

For the past couple of years, the winning photographic shot in the Domestic Animals category at the Cowichan Exhibition has been a photo of a horse's nose - in fact, one year both first and second prizes went to horses' noses.  So this year I was photographing horses' noses.  This fall I finally won first prize in the Advanced domestic animals category - ironically, with a photo of a dog! (It was the first photo in this post). But I'm still taking shots of horses' noses, and here are Dior and Lacey, the two sanctuary horses:


Not to be left out, one of the new piggies (whose name I can't remember) wanted to make sure I got not only the nose but the tongue:

And, of course, then the other piggies had to show me their beautiful noses: 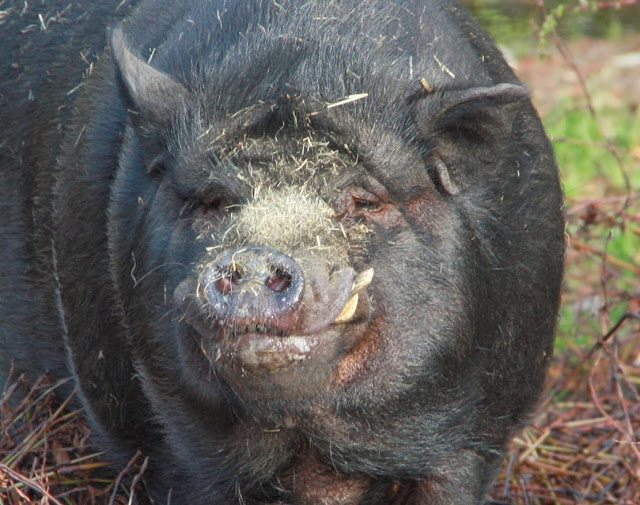 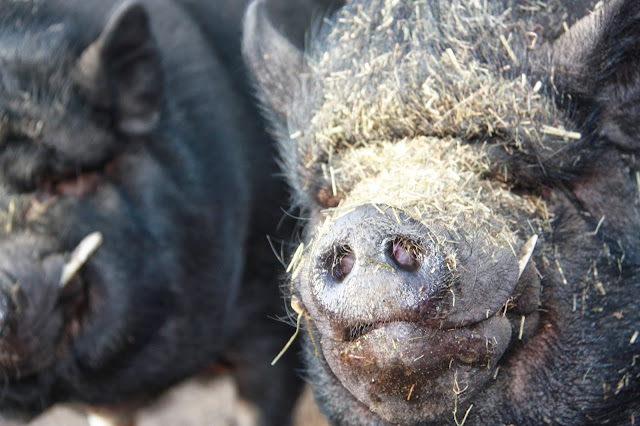 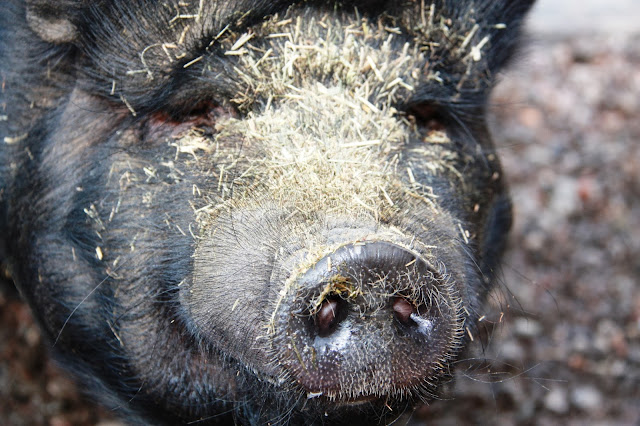 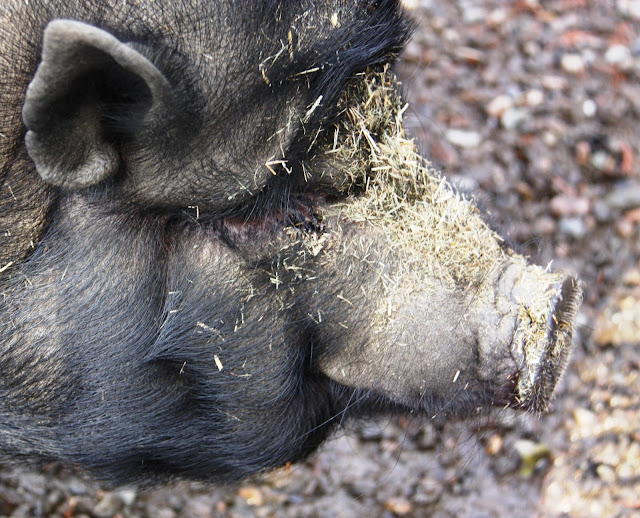 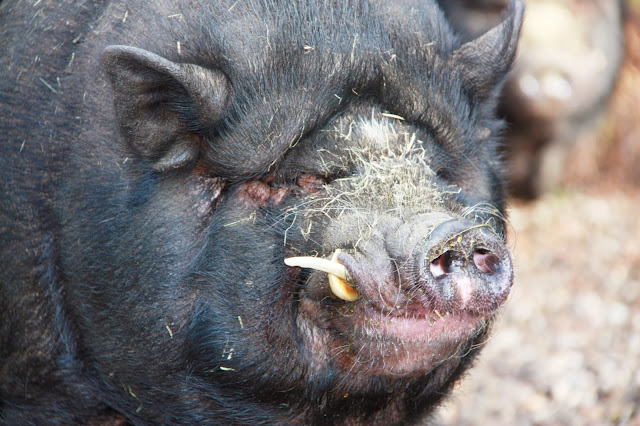 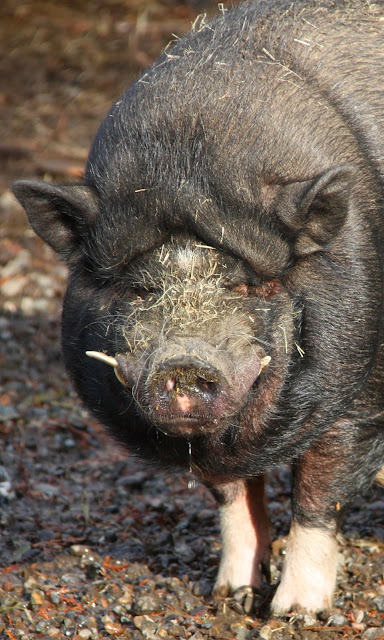 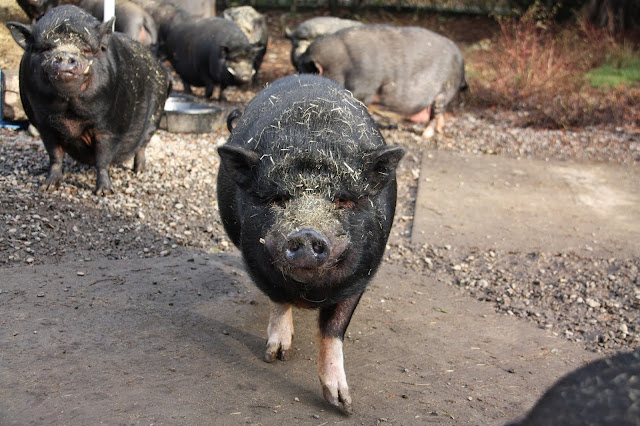 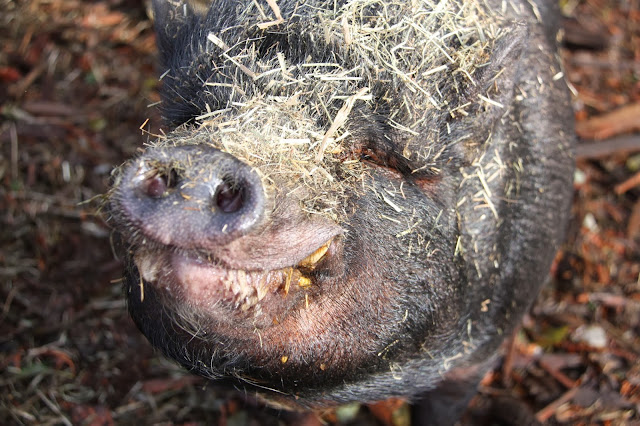 And not to be outdone, Chilco the dog had to get in on the photoshoot too:

Janice, the owner of Hearts on Noses, has had some serious heart problems lately - not hearts on pigs noses, but her own heart.  She is now awaiting either a triple bypass or the addition or repair of  stents that were placed there a couple of months ago. In order to sustain the sanctuary during this difficult time, she can use all the volunteer help and donations she can get.  Check out her website or her facebook page in order to find out how to help.  Hearts on Noses is located in Mission, BC.

And if you are on the island - my friends Gail and Jenn are heading over to Hearts on Noses on Saturday Dec 7th to participate in a work party.  They hope to have the truck loaded with donations of apples, carrots, Mazuri Exotic Pig Feed, wool blankets, squash, alfalfa, and cash.  Pickup or transport of donations from other areas of the island may be possible - email me using the contact on this blog or via facebook and I'll relay the message to them.

The noses at Hearts on Noses will be most appreciative.
Posted by Jean at 10:22 PM No comments:

When I was on the mainland this month for mom's funeral, I popped into Hearts on Noses Potbellied Pig Sanctuary to say hello to the owner Janice and to the 12 pigs I once fostered. The pigs were resting in their houses when I arrived, but I had treats so I figured they wouldn't mind being disturbed.

I went into their pen and tossed a tomato, one of their favourite fruits, near the door to their house as I softly called out the familiar "Piggy piggy piggy!" just as I used to do when it was dinner time at the barn.  Immediately one of them - Whisper, I think - came out to say hello.

But watch closely what happens to the tomato, just to the right of the door:


Did you see it? In the third picture?   I have no idea whose little snout that was that stole the tomato, but he sure did a sneaky job of it!  Fortunately, I had lots more and soon all the pigs came out for a visit.

More pics of my pals at Hearts on Noses tomorrow.

Streetwalker, Squeegee Girl, and Lady of the Night

I pace back and forth, back and forth, on the sidewalk.  Over and over again.  Then disappear for a short while before reappearing to pace again.  No, I’m not wearing 6” stilettos  or a short, short skirt, and it is a dog, not a pimp, who forces me into this routine.  I have never in my life walked so slowly for such a short distance as I do with Princess Riley.  Okay, maybe that’s not true – I seem to remember a very similar experience with Charley when she was old and arthritic.  Riley is followed by Mitzi – who sometimes forces me to walk very slowly and sometimes races around the town with me in tow.  And .  Who usually walks quite briskly except when I am in a hurry, and then prefers the streetwalker stroll.  Eddie simply tells me which direction to go and then struts out in style – if there is a pimp in my life, it is he.

And then there are the nose prints  - and often paw prints - on the windows.  Today it was time – sun low in the sky accentuates every streak of mud left by dirty-pawed dogs wanting in, and every smear of slobber left by nosy noses looking out.  Bucket and squeegee in hand, I tackled the windows.  Sadly, not one of those on the other side of the glass gave me a tip.

And lastly there are the night time duties.  Old dogs needing out at night should coordinate their biological needs instead of getting me up at 1 AM, 3 AM, 5 AM.  I am tired today.

Sigh.  I’m a streetwalker, a squeegee girl, and a lady of the night.

And I thought my former job as a university instructor was challenging.
Posted by Jean at 9:39 PM 5 comments:

Princess Chelsea Dawn went home today.  Before she left, I spent a little time this morning trying to get some photos of my dogs in Christmas attire for my cards.  They didn't cooperate, so I asked Chelsea to show them how it is done.


Her folks had a very long day, getting up in the wee hours of the morning for their flight  from New York, so before I took Chelsea back home to Chemainus, I stopped to give her lots of exercise at Swallowfield.  I figured they'd appreciate having a tired dog who would be only too happy to go to bed early tonight.

At first, Chelsea wasn't too appreciative of the stop - she knew all her gear was in the van and had already figured out that meant she was going home.


But soon she got into the swing of things and enjoyed the afternoon walk on a beautiful crisp and sunny day:


Soon the sun was low in the sky and it was time to go.

I hope you enjoyed your visit, Chelsea.  See you again soon!
Posted by Jean at 9:50 PM 1 comment:

I remember exactly where I was the day John F. Kennedy was assassinated fifty years ago today.  I was in Grade 8 English class - I remember the room, the seat, the teacher, the classmates around me.  I remember the shock.  I remember walking home with my friends, talking about the potential implications for world peace.  I remember sorrow - though I had very little political awareness of Kennedy's strengths and weaknesses, I knew him as a handsome and charismatic world leader and on that basis alone had come to admire him.

And I remember vividly the middle-of-the-night phone call telling me my sister had suddenly died.  It was two years ago today.  It may not make the  history books but it was life-changing for my family.  And I will never forget.


The temperature has dropped and there is a hard frost on the ground even midmorning.  But the sun is shining, the air is crisp, and to me the weather is perfect for a walk with the dogs.  I take Eddie, who can run off leash, and our guest dog Chelsea on a long line, and head to Swallowfield.  It is one of my favourite places to go in the fall - sunlight reflecting on pools of water, solitude, ocean vistas across the estuary, tall bare trees and then open grasslands,  a wide, level trail.

I usually head north at the t- intersection in the path, to the Chemainus River and across the estuary. Today I headed south instead, past the foundations of an old homestead, gazing at the paradox of the smoke and steam from the pulp mill and the sillhouette of the mill stacks against the natural beauty of this protected waterfowl landscape.

Bright red berries attract many small birds, while overhead an eagle flies.  Suddenly I spot a bird I don't recognize - the size of a crow yet rounder, with distinctive bars on the breast.  I have only my little camera, so can't zoom in quite close enough.  A grouse perhaps?  Yet it doesn't seem quite right.  It is only after I upload the photos that I notice a second bird of the same species to the right of the photo.  Can you see them both in this first frame?


Eddie, Chelsea and I continue on our way, crunching the ice over the puddles as we go.  This one, however, remained intact - a maple leaf in whirls of frozen water:

A few more photos before we head home:

Two hours of walking and we didn't meet a soul.  All within 15 minutes of home. How lucky I am to live here.
Posted by Jean at 10:24 PM 6 comments:

With a very cold wind blowing, and Shiloh having no fat on her bones and only a thin coat of hair, I thought I would look through the dog supplies to see if I had a sweater to fit her.  I already have a raincoat for her, though I had to get my sewing neighbour, Mary, to adjust the belly strap which went around Shiloh's skinny little ribcage twice (thanks, Mary!).

So, I looked for a long, skinny sweater, and this was the closest I could find to her size.  A wee bit too small, but she was very cooperative and I couldn't resist taking pictures. I do believe red is her colour!

Riley was most humiliated when she read my blog today and saw the most unprincessly photo of her in yesterday's post.  She said "Isn't that just like the paparazzi - sneaking unflattering photos while royalty is oblivious!"

So, to make amends, here are a few better ones, taken today while she was outside enjoying the day.  They aren't fantastic photos, but they do have the Royal Riley seal of approval.