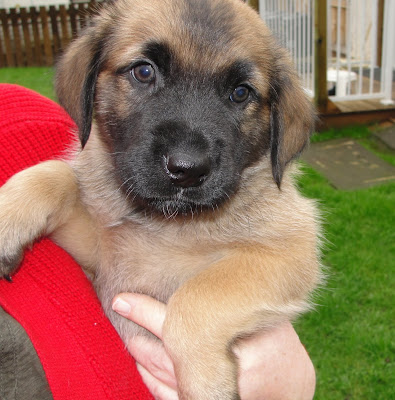 Bo (Bohemian squash) is quite a character. Though he often looks like a quiet, serious pup, he is actually quite lively when taken out of the pen. He is the only one of all the pups to be unwilling to pose for a picture in the basket - he kept clambering out (though eventually I managed a shot or two). Outside, he happily trotted after me when I called him, but also was interested in exploring the new surroundings. He likes to pounce and bounce around the yard, chasing imaginary grasshoppers. Placed on the adirondack chair, he immediately jumped down.

Bo often asks to be picked up (with a VERY loud, high pitched voice!), but wiggles when you do so. While occasionally submitting to cuddles, he is more of a "play with me!" type of dog, merely using a human as a mode of transport to more fun places. I suspect he will quickly learn to like games of fetch - if he doesn't get too distracted to bring the ball back. His human may be the one doing most of the fetching.

Bo is one of the larger pups, weighing in at 9 pounds 6 ounces just after his six-week birthday. That puts him about third or fourth in size, and his paws suggest he will be quite a large dog. He has somewhat fluffy fur, a black muzzle, light brown markings just above his eyes, and a generous amount of black peppered throughout his brown fur.

He doesn't think much of collars. He quickly outgrew a nice red bejewelled one, and repeatedly managed to remove the plain red one he was given instead. He now goes nekid, identified only by size and colour and a lack of a collar. He says he'll wear one when I find something more suitable than kitty cat collars. That's okay, Bo - at the rate you pups are growing, you'll soon all need new collars. 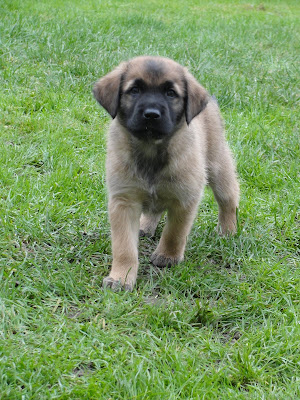 I follows you anywhere! 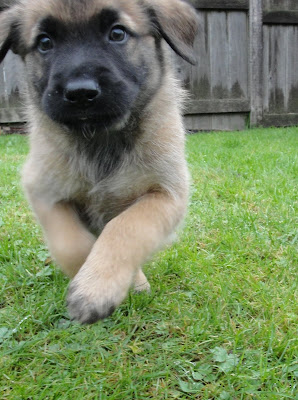 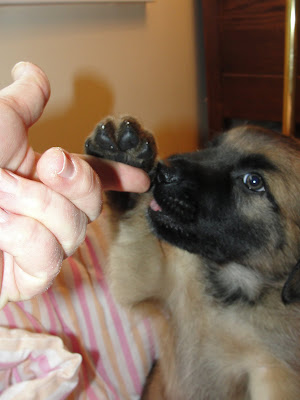 You got sumthin fer me to eat? 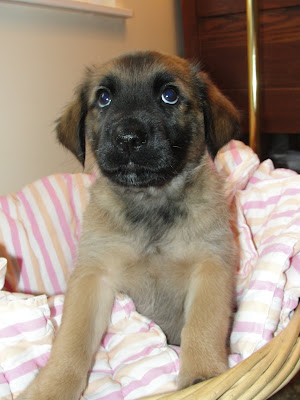 (Bo is one of ten pups I am fostering for the Cowichan and District SPCA. Each is being featured in a separate blog entry. The pups and their mama, Lucy, will be available for adoption shortly. All applications should go to the Cowichan and District SPCA. More information on Lucy and the pups can be found by reading the past two months' blog entries - starting September 11/2010 for Lucy, and October 1/2010 for the pups. If you are considering adopting Lucy, feel free to email me with any questions you have about her personality and behaviour, using the link on the side of this blog.)