Camping with Eddie - The Royal Visit

(If you are arriving at this blog for the first time, read the two posts below, and this older post here, for the full story of King and more photos of the visit.  Please note, all photos on this blog are copyright;  some may be used for noncommercial, noncompetition purposes by contacting the blog owner for permission and giving credit to the photographer).

On our fourth day of camping, we were visited by royalty:  a King, a Princess, and a Lady.

With them they brought their two human servants, Del and Mark.

King had travelled far - from his life roaming his kingdom in the north, to Turtle Gardens Animal Rescue in Topley, to his new kingdom in Lillooet.  But like any King worth his weight in dog biscuits, he adjusted well to change, listened to what the commoners had to tell him, and acted kindly to others with a benevolence as befits a King.

And, like any King, every now and then he went on a Royal Tour to meet the people of the land.  And took his entourage with him.  The paparazzi, of course, were in his face the whole time, trying to catch that perfect shot that would get the royal seal of approval.

Unlike a certain British human Prince who made headlines last year, King did not party hard and he kept his clothes on at all times.

They stopped at an historic old town, now campground, near the banks of the Fraser River.  There, they met Anxious Eddie, a character of some note whose tales are told on the pages of this blog, and his story-teller and personal paparazzi, Jean

as well as the feudal land owners, Ann and Ken.


The royal entourage were welcomed with some bits of dried liver and other offerings from Eddie's meagre supply.

The humans, however, had a whole feast of goodies, a banquet spread upon the table by hosts Ann and Ken.

Sure enough, soon the paparazzi picked up their cameras once again and the royal entourage posed for the obligatory media shoot.

And suddenly, it was time to bid farewell.  A King's schedule is always full.  But, like any benevolent ruler, he took the time to thank his servants for their dedication in arranging the Royal Visit, and his hosts for inviting him.

And they all lived happily every after.  Especially King, who found his happy-ever-after ending through the help of some Good Samaritans, a wonderful rescue group named Turtle Gardens, a blogger, and a very kindhearted family.  A family he now calls His Own.
Posted by Jean at 11:21 AM 4 comments:


Me:  It's coming, it's coming!  Meanwhile, King has written a great post about our visit on his blog, which you will find here.
Posted by Jean at 8:11 AM 6 comments:

Camping with Eddie - a sneak preview of our visitors

I wonder how many readers have been following this blog since November 2008, when I wrote a post entitled "Needed:  One 'Happily Ever After' Ending" about a stray dog, his pack, his broken femur, and some very wonderful good samaratans from Alberta who found them, picked them up, and travelled 7 hours out of their way to take the pack to Turtle Gardens?  If you haven't read it or don't remember it, please click here (then hit the back browser to return to this post).

The post was read by  another couple of wonderful people, Del and Mark, who live about two hours north of where I was camping.  They tell me that post convinced them to inquire about King, the leader of the pack.  And shortly thereafter, they adopted him.  So now you know why I feel so very connected to the visitors who came to our campsite on Saturday, and especially to this sweet, sweet, sweet boy:


He came with Del and Mark and his two canine siblings, Lady May (a recent adoptee from Turtle Gardens) and Princess MollyDawg (who has lived with Del and Mark for most of her life and graciously accepted King and Lady May into her home.

Of course, I took hundreds of photos.  Hundreds and hundreds of photos.  But these two are all I'm showing you today - just a sneak preview of what's to come.  I'll post some more tomorrow or the next day.  Del will also be posting a photo/story of the visit some time in the next few days - when that happens, I'll link to it on my blog.

Their visit was the highlight of the week.
Posted by Jean at 9:48 PM 5 comments:

Camping with Eddie - the first couple of days

We arrived at our camp in the late afternoon.  First things first, we put up the tent and Eddie made himself right at home.

We also put a crate outside so he would have a comfy, safe place to chill when we were sitting around the fire.  Eddie would be tethered, on leash, or crated during our holidays.  No taking chances on a lost dog in unfamiliar surroundings!

Then it was time to relax.  As soon as we sat down around the fire, the wildlife appeared.


Fortunately, Eddie has no interest in squirrels.  Very fortunately, because at one point he was lying next to some gray and white rocks and a squirrel ran right over and hopped on his back, thinking he was just another rock!  Eddie didn't even seem to notice, but the expression on the squirrel's face when his feet met fur was priceless - as was the speed with which he raced away!

There was just enough time for beer and peanuts before dinner.  The Stellar jays and squirrels thought so too.


After dinner, a walk down to the creek 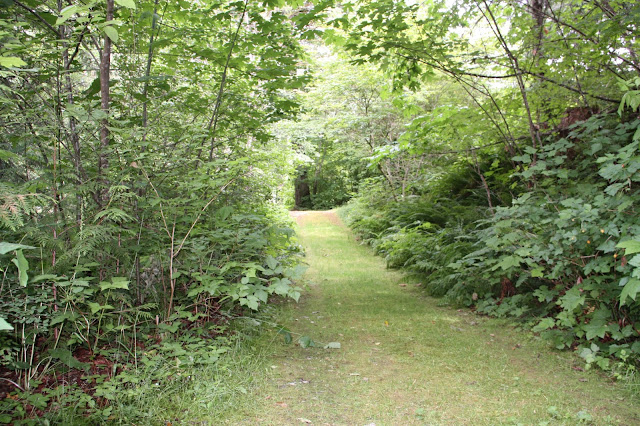 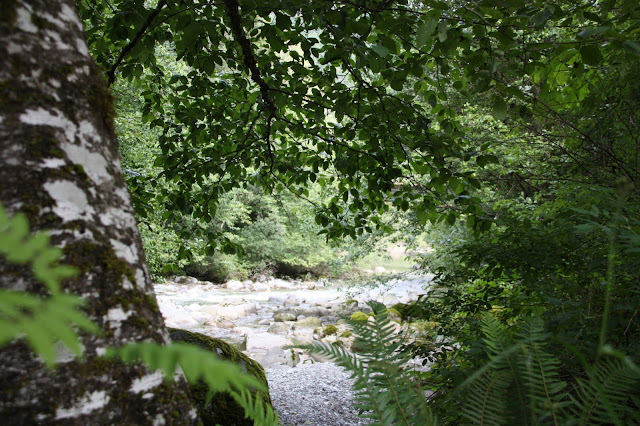 And a few more photos,


And soon it was time for bed.


And for the next couple of days, that was all we did.  Eat, sleep, walk, photograph.