How the piggies got their names 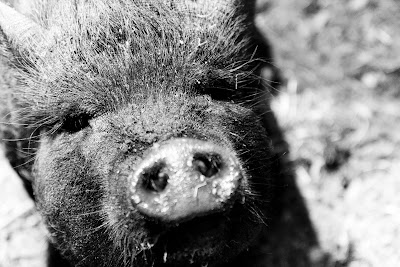 Photo by Red Dog Photography
A reader asked me to tell the story of how the piggies got their names. And so, for Lynda, here it is:

When the SPCA contacted us about taking two piggies from a large multi-species seizure further up the valley, Janice of Hearts on Noses Sanctuary, for whom I am fostering, told me I could choose names for them. Her one recommendation was that I choose two words that go together.

I happen to be a Scotch drinker. And what goes better with Scotch than Soda? (Well, truth be told, I drink my Scotch neat, or on the rocks, but NEVER with soda. But somehow Scotch and Ice just didn’t have the same ring!). I had a list of other possibilities, but as soon as the pigs were unloaded from the trailer onto my front lawn, it was quite clear that Scotch and Soda were the right names for them.

Scotch is mellow, smooth, and leaves the mouth with an mmmmmmmmm smile. Soda is effervescent – I wouldn’t say bubbly but certainly she has “oomph” and attitude, with that sharp little edge of an unsweetened drink.

When the babies arrived a few weeks later, I asked some animal-loving internet friends for ideas, and many people listed or gave me links for drinks made with Scotch and/or Soda. And so my piggies became the Beverage Gang. Each of their names is the name of (or part of the name of) a drink which can be made with Scotch, or Soda, or both.

Tom: (Scotch Tom Collins: 5-6 dashes of lemon., a generous amount of Scotch, 2-3 lumps of ice, in a large glass filled with Soda)

Fizzy: (Scotch Fizz: 1 oz. Scotch in a champagne glass, top with chilled champagne and decorate with a strawberry)

Rob Roy: (Equal parts Italian Vermouth and Scotch, and a dash of Angostura)

Rickey: (Scotch Rickey: ice, juices of half a lime and a quarter lemon, Scotch, fill with Soda)

Spritzer: (I did find a recipe for a Scotch Spritzer but now I can’t locate it; however typically a spritzer is soda and wine).

And there you have it – Some very happy pigs who will, with care, age well. And, like a very good single malt scotch, they never fail to bring a smile to my lips.

(For the story of Scotch and Soda's arrival and first year, click here, and for highlights of the babies' first year click here. )
Posted by Jean at 10:50 PM

Oh Jean you crack me up. Who knew that there were that many drinks made with scotch.
I'll have to try some of them.

Thanks Jean I loved hearing the explanation of your piggie's names! and being New Year's Eve perhaps you will have to give a toast to each! with your appropriate single malt scotch. Can't say I can relate to you there as I don't care for that, I'll stick to the bubbles tonight. Vancouver is still a skating rink, I just set off to walk the dogs and had to return home. Happy New Year to you and all your critter's out there! VERY best wishes, LYnda

Thanks for sharing that, I had no idea how the piggies got their names. It's very cute!

But I carefully read all of the "recipes" and alas I'm not a Scotch drinker either, so will leave you to it!

Great story, Jean. I can't think of more perfect names! I hope 2009 brings health and happiness for you and yours, continued gifts of nature to inspire your wonderful writing, and the odd Scotch or two to keep things interesting:)