What a wonderful surprise - an update on another of Lucy's pups - Deli, now called Ruby!  I can't get over how big the long-legged pups have become, and how similar in appearance when they were really quite different at birth - some fuzzy, some smooth, all different shades and shapes.

Here's Deli/Ruby as a pup: 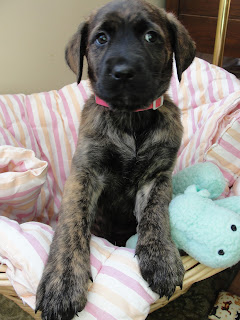 And here she is today! 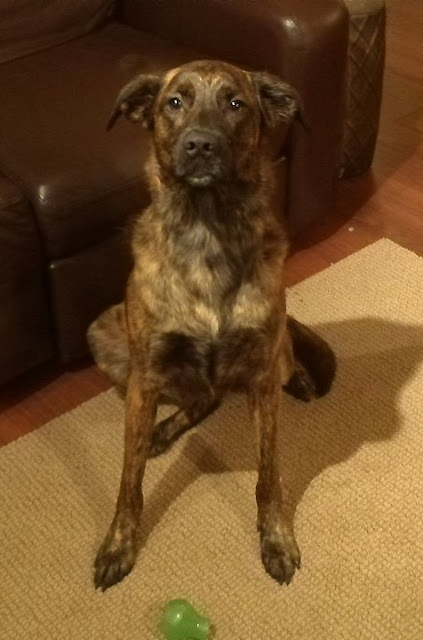 Sharon and Jamie, Ruby's humans, tell me that Ruby is a sweet girl, quite submissive and loves to play.  She gets lots of love from their two sons, and is active and 'very spoiled' - what a lucky dog.  She is a bit of a princess, and doesn't like going outside in the rain.  Ah yes - I've had many a princess dog standing at the back door looking at me like I'm crazy to expect them to get their precious fur wet!

I think she looks most like Hubbard - but clearly, Fitz (Nugget), Zuke and Major Bo Jangles all have similar body types.  I'm dying to know what the little short legged ones turned out like, but haven't had any updates from them.

I really see Lucy's face in the photo of Deli/Ruby - she has the exact same squarish end to her nose/mouth, and the expression in her eyes reminds me of Lucy-Loo so much.

Thanks for the pupdate, Sharon and Jamie - it's so good to know she's doing well.
Posted by Jean at 9:59 PM

The first thing I thought when I saw Ruby's photo was that her face looks so much like Lucy. Interesting to see Lucy's face on top of that long-legged body! Great to know that another of her pups has a great home.

What a beautiful dog she is. Our princess actually doesn't mind going out in the rain, she just demands to be dried off when she comes back in.

If memory serves me correctly, I met you around the time you said goodbye to Lucy Loo. I seem to remember a post about the last morning. (Or is this dementia speaking?) You made me cry. Seeing all her pups grown up makes me realise how much time has passed. Did you ever do an update on Lucy herself?

P.S. The squiggly numbers and words are back! Had some spam eh.

GLP, I think the last update I received on Lucy was a year ago. It is here: http://mylifewiththecritters.blogspot.ca/2012/01/bright-moment-in-stressful-day.html

And yes, the squiggly numbers and words are back - I tried removing them for a time, but when I opened my email to find 179 messages that needed moderating, 178 of them spam, on one day alone, I decided to reinstate it. I really hate it, because I do get more comments when I remove that step, but I hate spam even more.

Ruby is adorable! Glad she is being treated like the princess that she
is :)

I see my Major's eyes thru Ruby. I so enjoy seeing the fine lineage of Miss Lucy's offspring! What a joy those pups have brought to all of us!

I do enjoy these updates, jean. Ruby is a beauty (my attempt at poetry :) I am grateful to you all over again, each time I see how your hard work paid off for those dear little pups. And that Lucy update was truly special. Must be just about time for another one :)