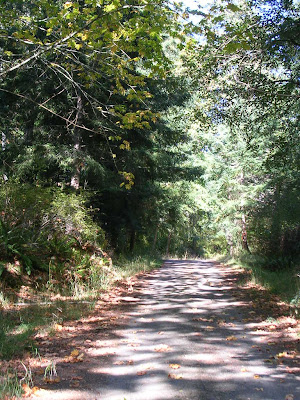 After yesterday's disappointing - no, infuriating - result at the District of North Cowichan's council meeting (they voted to continued using the gas box to kill cats, with only one dissenting vote.....I am still too angry to discuss their inane, illogical and ignorant justifications for such an inhumane decision), I decided to stay away from the computer, to stay away from the phone, and take off hiking with Charley and Sadie.

I chose Maple Mountain again, but from a different starting point - this mountain has almost as many trailheads as it has trees! As I was hiking alone and had told no one where I was going (I know, I know - I did take my daypack with a warm fleece, water, snack, cellphone, pepper spray, first aid kit, etc. etc., so wasn't exactly in any danger, but next time I shall remember to email a friend with my destination before I leave!), I stuck to an old logging road despite the tempting trail signs everywhere leading off into the trees. 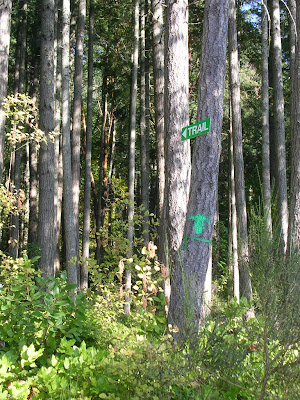 It's obviously a popular area for equestrians, judging by the piles of fresh horse poops along the way. Why is it that dog owners must pick up their dog's feces, but horse owners need not, even when it practically covers the whole width of the trail for several feet??? (Sorry, that's one of my little pet peeves! LOL). Sadie thought they would make a nice light snack, but mama clipping her leash back on persuaded her otherwise.

One nice thing about inactive logging roads is the wide path that enables the walker to be more aware of their surroundings - better vibility of what is coming up, greater chance to spot wildlife or other hikers with dogs before suddenly coming across them. And....sometimes built in markers to tell you how far you have travelled. 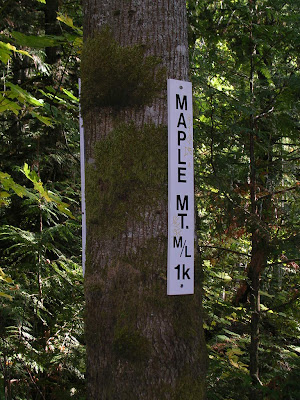 It was a beautiful fall day, sunny but cool, golden leaves drifting down, sunlight filtering on ferns below. Birds were everywhere - singing happily and flittering from tree to tree. There was an abundance of Northern flickers - every few yards one would fly up from the ground where it had been foraging, its beautiful orangey-red underside flashing in the trees. The road was a relatively easy uphill grade for the first kilometer, and then leveled out as the view opened up below. 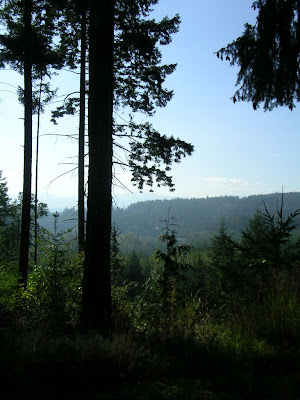 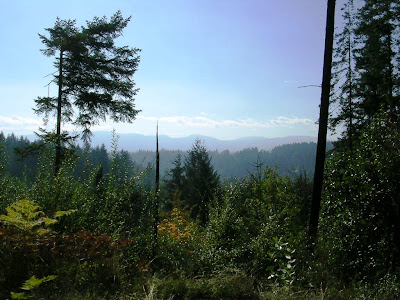 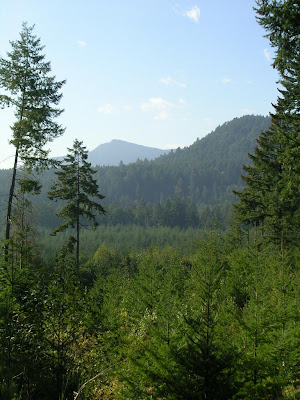 Then the road began to climb more steeply, but I am one of those hikers who keeps saying "let's just go to the next hill....the next bend.....that clearing....the next rise.." and before we knew it we had been walking uphill for over an hour. Just as we came to an open space from an old clearcut, I spotted a movement at the side of the road ahead - a cat! A kitten actually, a small orange cat perhaps 6 - 8 months old, who tore off into the brush as soon as we spotted each other. The dogs were lagging behind me, tired from the uphill stretch, so I was able to quickly leash them just in case they decided to follow the scent. From its behaviour and the fact we were far from any residences, I'm guessing the cat was feral - how ironic that I should go hiking to get away from the topic of homeless cats, only to find one high up on a mountain! 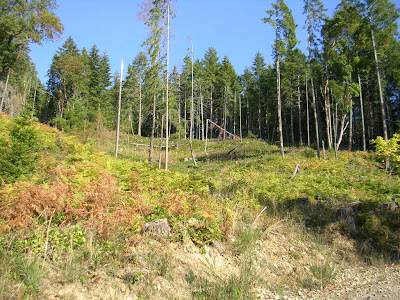 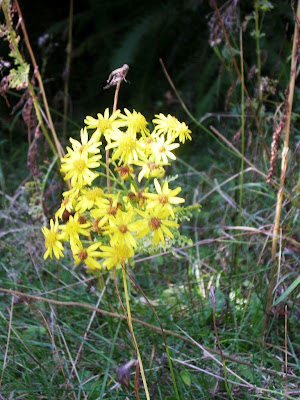 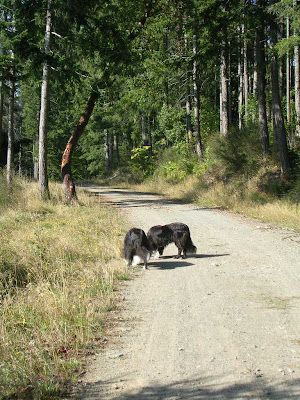 We walked a bit further, and then ever cognizant of the sun starting its downward journey and the dogs' limitations, we turned around and began our descent. We came across a woman with three dogs - two boxers and a lovely pitti - and one of the boxers decided to make macho and let Sadie know who's boss, but we soon had all the dogs under control and continued on our way. The only other person we saw all afternoon was a man digging salal bushes in the trees - probably illegally, as there are many signs at the trail heads warning that salal can only be taken with a permit, and he was very quick to grab his shovel and slip away when he saw watching him through the trees. Salal is used in floral arrangements but I wonder if there is some Eastern herbal use as well - the warning signs were in English and two Asian languages even though this area is pretty much solely English-speaking Caucasian and First Nations cultures. It is the only place I have seen bilingual signs with the exception of the beaches where people dig for clams, sometimes illegally during the closed red tide warnings.

But I digress - the return walk was pleasant and mostly uneventful, and the dogs and I enjoyed a good walk and a good workout. 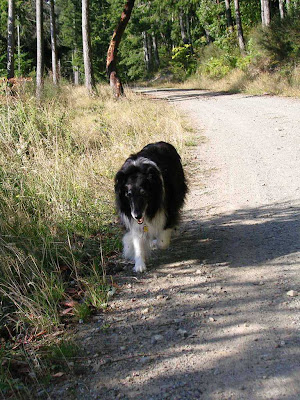 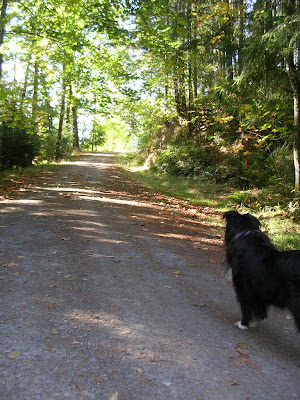 I realize, in looking over the past many entries, that Oliver and Belle hardly ever appear in my posts anymore. They are not able to do the hikes and spend much of their time sleeping. I know Kelly, Sharon and Deb are probably wondering "doesn't she spend ANY time with those poor little shelties??????". I promise to do an entry starring Oliver and Belle soon - they are doing well, totally spoiled, and funny as ever. Just to placate you sheltie lovers, here's a video taken this morning of Oliver once again doing his happy dance to the accompaniment of the Barking Princess Belle.

Jean, I am so sorry about the decision. Don't any of the decision makers have pets??? I just don't get it! And yes, ironic that you would meet a kitten so far into the trail, and on that particular day. Seems like you are not being permitted the opportunity to put this behind you. Are there any more avenues to follow up?

I'm glad you got away for a beautiful hike, and was interested to read about salal. I had no idea.

I wonder if the vegetarian composition of horse poop is the reason for less vigilance cleaning up. It does seem that a considerate person might at least move it to the side of the trail.

Very sorry to hear about the North Cowichan Council's vote - it's heartbreaking. But Jean, you have worked hard and planted seeds of knowledge about this inhumane practice, and some day they will bear fruit.

I'm envious of your hikes.....thanks for sharing the beauty you see.

And I laughed to see Oliver doing his happy dance and Belle being a great cheerleader, made my heart happy!

yes yeah for the shelties...they are da bomb...I adore shelties.
The decision regarding the gassing is so pathetic but you have waged a grand fight..

take care..I hope to read you as we start on our travels...hubby and I and the dogs are heading off snowbirding for the next 6 months..Yeah..but I will be watching for stray kitties and puppers and other creatures..

All the best Jean over the next while..