Sauntering in the Sanctuary

Most Fridays, my friend Pat and I go sauntering with our dogs.  Shorter and less demanding than my Monday hikes with another friend, and slower than my daily walks in my neighbourhood, we decided 'saunter' was the most appropriate term for what we do.  And most times, we meet at Morrell Nature Sanctuary, midway between our homes and a 45 minute drive for each of us.

It is by far our favourite place to saunter, and for the most part is kind to old knees and easily tired dogs - both the four legged furry dogs and the 'dogs' at the end of our human legs! Dirt trails of varying lengths and loops, gentle gradients, lots of benches, shady trees -  we never tire of this place.
Every time we go there, we see something new - a migrating bird, a baby duckling, an interesting flower, a wee croaking frog, a colourful leaf, a fascinating mushroom.  This past Friday was no exception.


As we started up the trail, we heard a racket in the trees - robins fluttering and squawking and fussing about.  It didn't take me long to figure out why - a lovely barred owl, likely looking for a baby bird snack - was sitting in a free a few metres from the trail.  Unfortunately, just as I was focusing the camera and waiting for him to rotate his head towards us, a volunteer came up behind us and spoke to us, which set Certain Dogs barking loudly and wildly (looking at you, Maggie and Parker), scaring the owl away.  However, this wasn't my first barred owl - this spring and summer have been exceptional, and I have seen at least four in the past couple of months.  So the first photo here is the one the dogs interrupted, and I've added a second photo of a barred owl, taken on one of  my hikes a couple of weeks ago.  Barred owls, unlike many others of their species, often seem to hunt in the daytime. 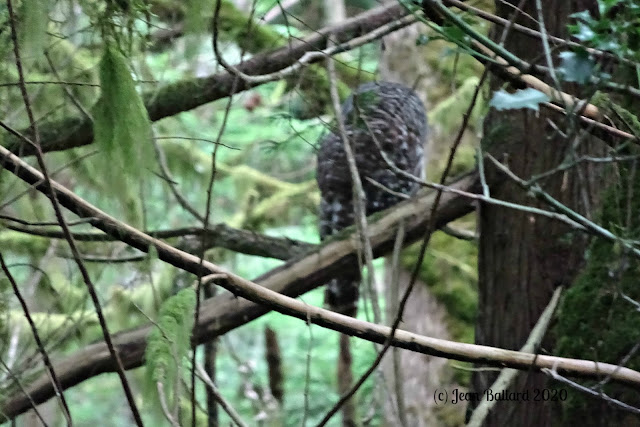 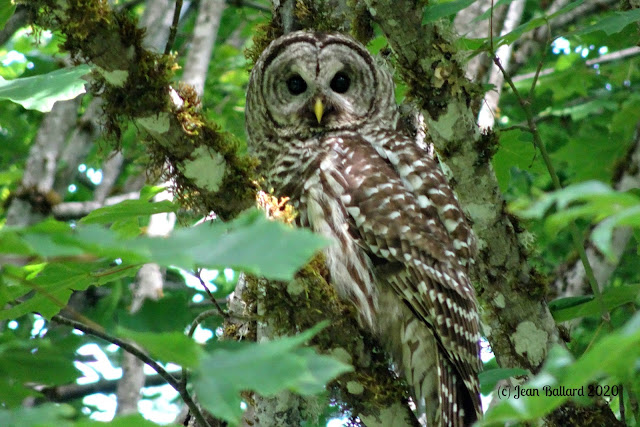 We continued up the wide path towards the lake, where Maggie was disappointed to find no ducks this time - usually there are several, and the last few visits we have seen ducklings as well.  To help her overcome her disappointment, Auntie Pat pulled out the treats - and look what good dogs we have! 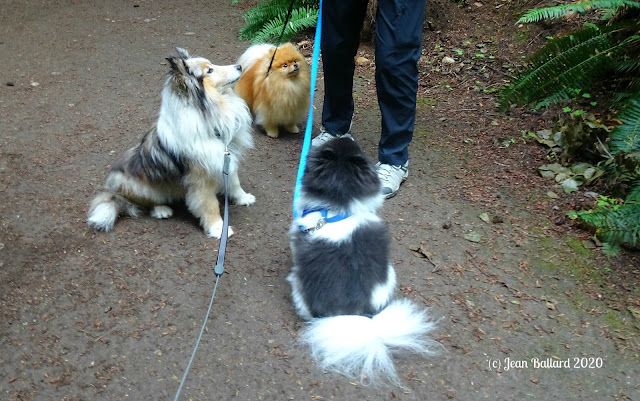 I had to laugh at this second shot though - the look of astonishment on Parker's face when his mama dared to feed Maggie first is priceless! 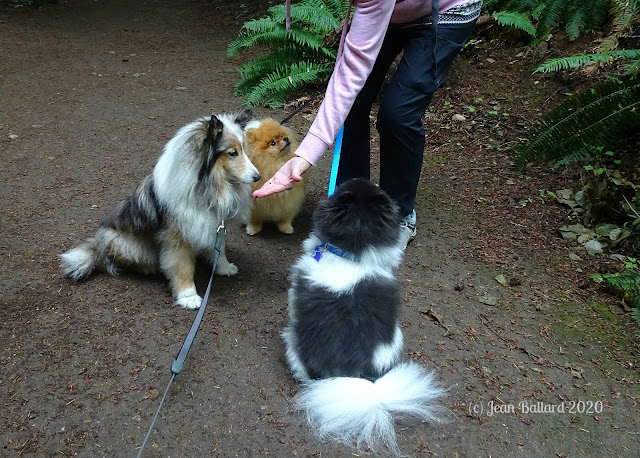 Continuing on, we took the Beaver Pond loop trail (we've never seen a beaver in the beaver pond, but maybe one day!), and then connected to Bob's Trail.  There I spotted something I'd not seen before - a gnome plant (hemitomes congestum, for those of you who prefer the scientific name)!   Gnome plants are listed in my Plants of Coastal British Columbia reference book (by Pojar and MacKinnon) as belonging to the "Oddball" category of plants 😁.  They are a waxy saprophytic herb having little or no chlorophyll, and live on dead and decaying vegetation rather than making their own food through photosynthesis. They are anomalies in the wintergreen family. 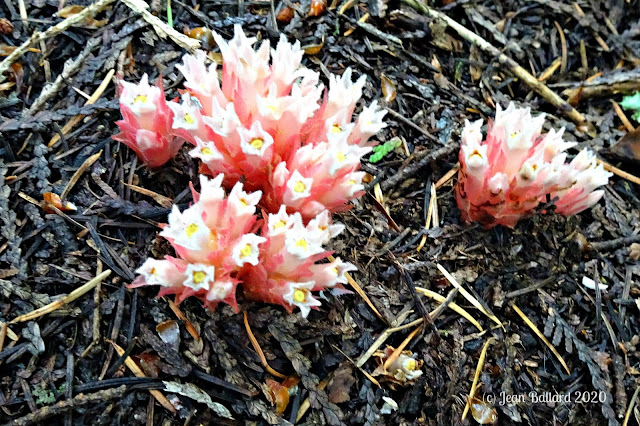 Throughout the park, we saw large clumps of another  plant from the 'oddball' group, monotropa uniflora.  When I was growing up, I knew it as 'Indian pipe', but it seems to be more commonly known now as Ghost Pipe, Ghost Plant, or Corpse Plant, at least here on the island. While I usually see one or two clumps every year, this year they are all over the place, their white or pinkish waxy shoots emerging from the dirt to become pipe-like shapes which sometimes turn pale blue, mauve or purple (I've seen some of each this year) before turning black with age. Monotropa uniflora  also lacks chlorophyll and therefore cannot make its own food.  Instead its roots are connected via fungi to the roots of conifers from which it obtains its nutritional needs. 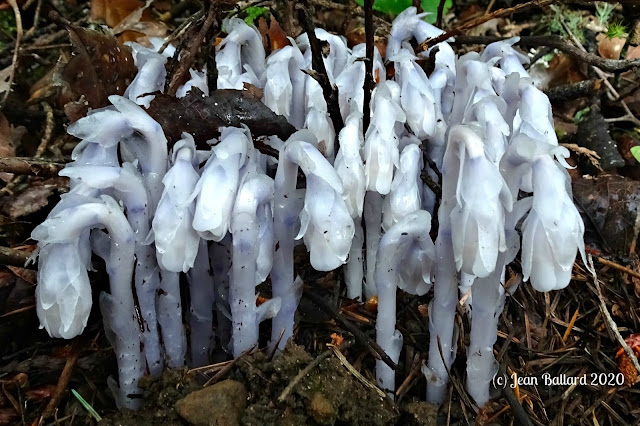 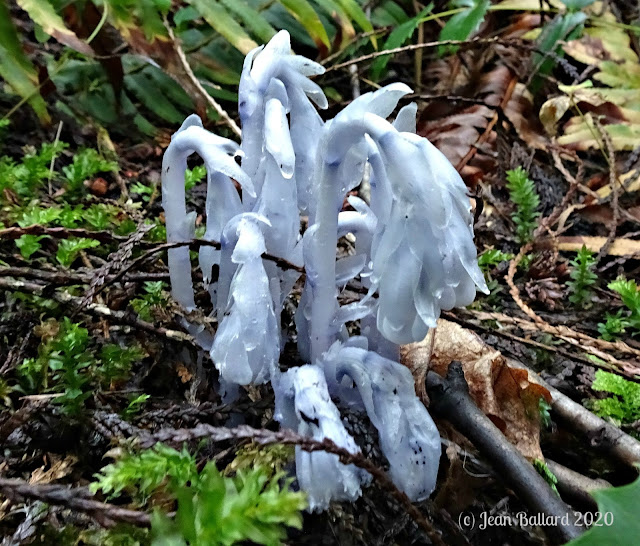 Volunteers  at the sanctuary have been busy building a few new benches along the trails, and Maggie decided to practice her 'two paws up' from this week's dog class (her current course includes some parkour work - moving through urban environments using benches, trees, statues, retaining walls etc. to practice skills of stretching, balancing, and negotiating scary obstacles).  Good thing the bench wasn't very high because wee little Parker decided  to copy his sheltie buddy!

When we rejoined one of the wider paths at the foot of Bob's Trail, I noticed what looked like a light brown hardboiled egg in the grass, a bit of egg white splattered on the side.  Not an egg at all, but an amanita mushroom.  This one is, I think, amanita pantherina, commonly known as Panther Amanita.  It is not generally seen until fall according to my reference book, but with a cooler spring and summer and an amazing variety of mushrooms around, perhaps it has made its appearance early. Another first for me! 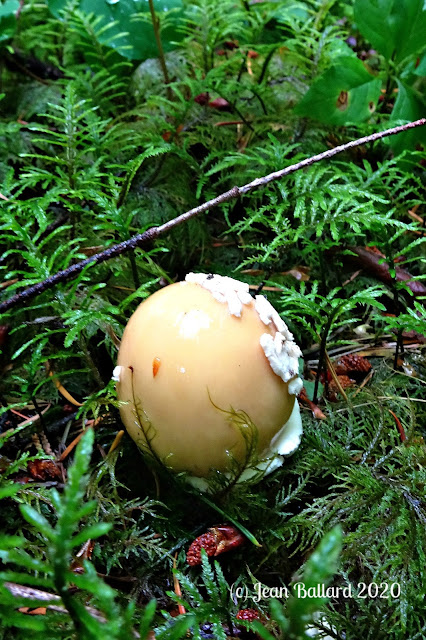 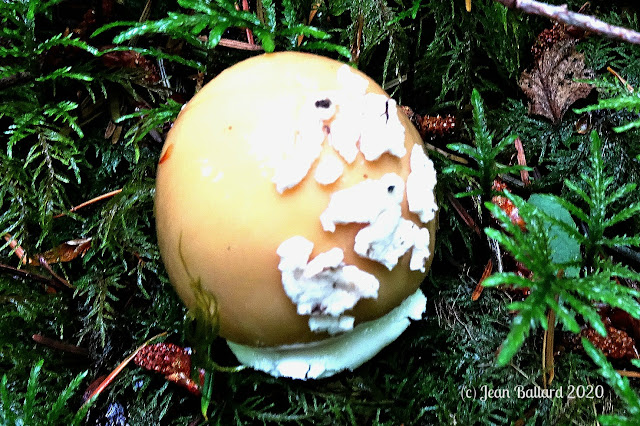 After returning to our starting point, we headed over to the Yew Loop and choose a lovely pair of benches to have our physically-distanced lunch - shared, of course, with the dogs. 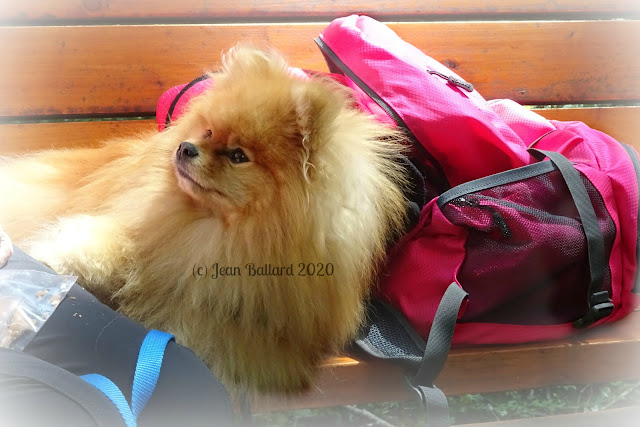 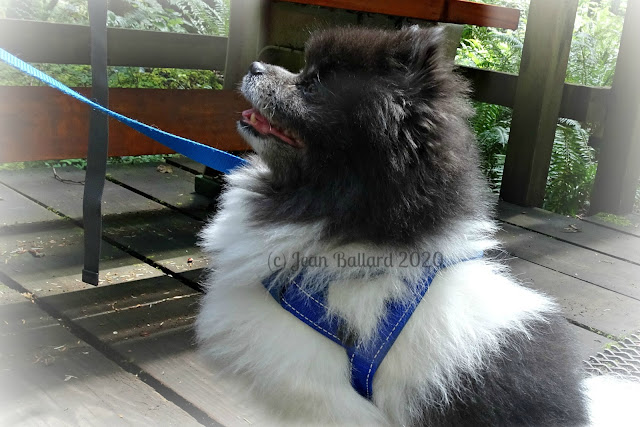 And then it was time to head back to the cars and say goodbye until next week.

Hi, Jean, how nice to see your posting this morning. I really found it educational as well as interesting. Maggie always holds her head so regally that it's hard to believe that she is shy as she looks so confident in her pictures. I laughed when I saw the expression on Parker's face when the treats were being given out, sort of like he's thinking "what's up with that, Mom?" lol
I'm enjoying what summer we have here and walking regularly nearby, I was out to see Sparkle yesterday at the farm, she is so happy there with the chickens, cats,horses and other dogs.
Have a good day and pats for Maggie.