I've been horsesitting up island again, and the birdlife is amazing.  Bewick's wrens and nuthatches, quail and eagles and woodpeckers and hawks and..... owls!  I heard them screeching the last time I was here, but couldn't see them - likely their baby was very young and being kept well hidden.

The owner of the property had since seen the owls - or at least two of them - so I was really hoping I would be able to get some photos this time.  Armed with two cameras, neither of which is working properly in autofocus mode, and a limited knowledge of how to use the manual settings especially in twilight, I sat outside for a couple of hours the first evening.  But nothing.  Nada.  Not even a screech.

But last night after putting the horses to bed at dusk, I startled three of them on my way back to the house. The trio - a mom, dad, and juvenile, I think -  were likely hunting in the field on the downward slope.

Me:  Mitzi! I was just teasing!  If you would eat your dog food instead of bunny poops, deer poops, and horse poops, I wouldn't have said that!


Me:  (Mutters to self:  There's no arguing with a Bichon Frise - they always win!).

The owls flew to the top of the trees, the largest owl screeching at the smallest one and coaxing him, or her, into the deepest, greenest branches of the trees.

From a nearby treetop, the third owl screeched her instructions.

(Note to those who know more about owls than I do - I have no idea which adult is male and which is female, nor if the juvenile is a boy or girl owl.  I am using poetic license.  I'm a writer not an ornithologist.)

And for the next hour, I madly clicked away, trying to get some half-decent photos as the three of them played "Catch me if you can" among the tree tops in the darkening night sky.  From the dozens of shots, I was able to work some photographic magic on a few to lighten the dark sky and bring out the owls - or at least their silhouettes.  Enjoy. 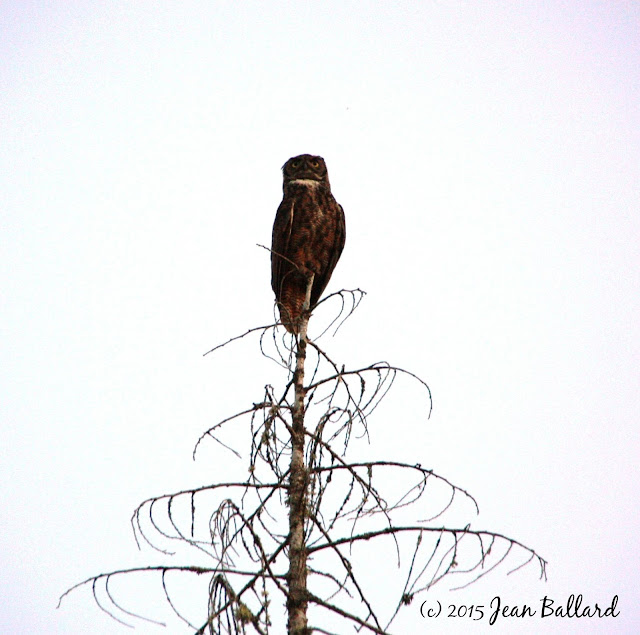 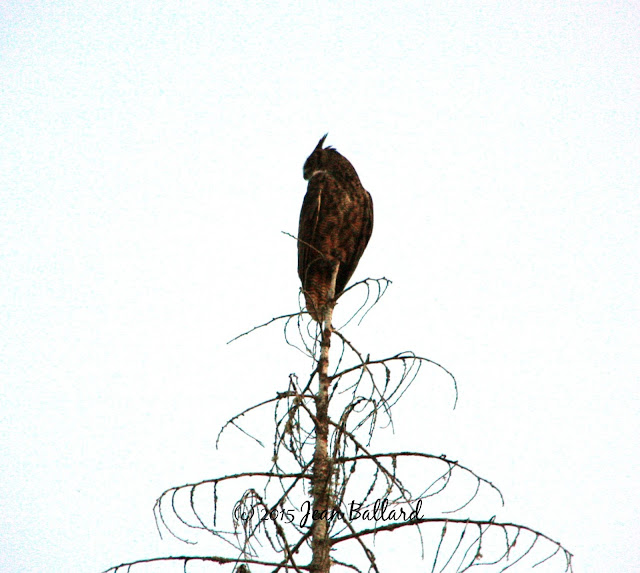 Magic and Boo say this post is long enough, and they aren't going to share the limelight with some silly birds, so I'll post photos of the rest of our visit in a couple of days.  But I will let them have the last word:

Jean, your owl pictures are great - absolutely my favourite birds.
Even though I enjoyed the time spent on the Island, I am so happy to be home.
Needless to say, Sparkle is as well, take care.
Marie

Mitzi, our Moose loves Goose pâté. He claims there is nothing better and can't understand why I won't let him enjoy his treat. LOL

Absolutely beautiful pictures of the owls! What a treat to be able to watch them fly and play.
Mitzi you look very cute too. Look at it this way Jean. At least she is eating. Bwahh. I know me bad.

Great shots, Jean. Those owls were awfully tolerant of you if you 'stalked' them
for an hour!
Now we need to find that elusive one at Crofton Lake...

barb and the furry ones

LOL - I wasn't actually 'stalking' them, Barb - I was standing (or sometimes lying)very still in the field with the camera zooming left, right, and centre as they flew from tree to tree. After the initial startle response, I think they mostly ignored me and were just busy hunting, playing, and teaching junior the fine art of bug collection, flight, and rabbit-spotting. The only times they became really aware of my presence and screeched at Junior to hide was when I changed position, especially when I stood up after being down on the ground.

Looks like a super nice get-away for you and miss Mitzy...
I have had owls perch on my deck railing here a couple of times... amazing to see them so close.