No, it hasn't been thirty-five years since I last blogged (though it has been almost two months), but thirty-five years since I last hiked this particular park - Strathcona Park - and this particular loop route through Paradise Meadows and alongside Lake Helen MacKenzie and Battleship Lake.  We accessed the park from Mt. Washington ski resort area, near Courtenay on Vancouver Island.


Back in the late 1980s , I went on vacation here twice, renting condos in the fairly newly established ski resort which had not yet begun to realize its year round potential.  In the first trip with my mom and sister, and the second one with a group of friends, we rented a huge multi-bedroom, multi-bathroom apartment for next to nothing.  There were no services up there but we had full cooking facilities and packed in enough food for the week. Both trips were memorable.


This Saturday I had the opportunity to revisit the trails with a small group of women I was meeting for the first time.  They were all a few decades younger than me, and at least some of them were much swifter than I, but we all had a good time with lots of laughs along the way - not unlike when I hiked there with family and friends.

The park, however, had changed quite a bit.  Now a well-developed tourist attraction, the rustic and often muddy paths of the 1980s are cleared and well marked, and, along much of the route raised boardwalks have been build.


I have mixed feelings about that - while it protects the environment, it makes hiking side-by-side amidst the eager (and often backpack-ladened) masses a challenge - not to mention that these are, for the most part, not flat board walks but ones where you walk a few paces then step up, walk a few paces and up again, walk a few paces and down......tedious to say the least, especially for seniors with bad knees.  The parts that weren't boardwalk were criss-crossed with thick roots, so one could never just gaze about but had to keep one's eyes on the ground.

The meadows was the easiest part - flat, boardwalked, and picturesque with small lakes, ponds and bogs, green grasses, and numerous flowers.

As we started the climb up to the first lake, we stopped whenever possible to take in the beauty of our surroundings:


Reaching Lake Helen MacKenzie, we took a break.  The scenery was beautiful, and two of our group went for a swim while the rest of us ate snacks, rehydrated, and watched the cheeky whisky jacks and Steller's jays.


After a refreshing break, we headed over to Battleship Lake, about two km away.  While Lake Helen MacKenzie does have a backpacking campsite with tent pads, food caches, and a toilet, Battleship lake is more developed for the day hiker or angler, with two docks, some picnic tables, two bright yellow BC Parks Adirondack chairs perched on a lookout, as well as toilet facilities. I can't imagine lugging a boat up here, though I'm sure some do bring inflatable boats and/or float tubes, or maybe even a canoe or kayak. 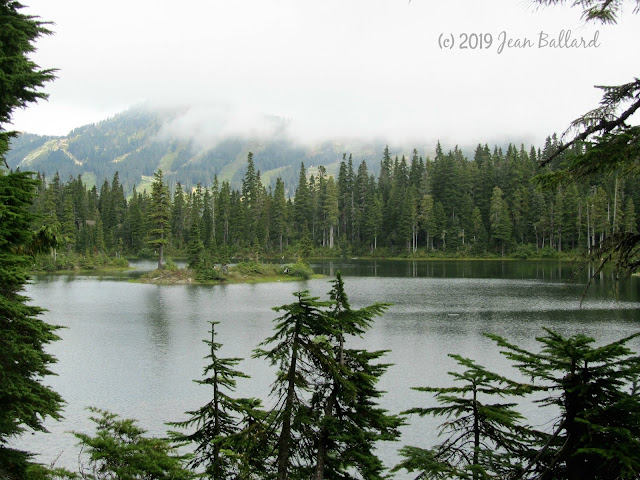 Throughout the forest trails that connect the lakes and lead us from meadow to lake and back again, there was an amazing variety of mushrooms,  Despite laws forbidding the picking of plant life in all provincial parks, I saw numerous people foraging off the trail, large plastic bags full of mushrooms. I hate it when people break the rules - tromping on a fragile ecosystem, destroying the balance of nature in the wild, removing flora that others might like to see.  These were just a few of the mushrooms I photographed from the trail or boardwalk:

While the trails we took are often described as 'easy' with 'minimal elevation gain', as a senior I would rate it as more easy-to-moderate, with steady but manageable uphill sections (elevation gain of about 300m, not the 70m some sites report).  At the pace we were going, and with people frequently coming up behind us (or towards us on narrow boardwalk), this was one of the more demanding hikes I've done in recent years, far different from the usual somewhat leisurely and very peaceful hikes with my regular hiking buddies.   According to my Fitbit, we covered approximately 7 miles (not km, as some sites report), or just over 11 km, taking just over three hours including breaks at both lakes.

I don't regret going in the least, and will likely go again, but next time I'll try to go before or after the summer rush (provided the trails are clear of snow), and on a weekday when it is quieter.  And probably with hiking buddies whose pace and knees are more similar to my own.

(Note to my frequent followers:  My usual camera has been sent off for repairs as the LCD lens broke a few weeks ago;  these shots were taken with an old Canon Powershot SX210is pocket camera I picked up cheap at the pawn shop so I wouldn't be camera-less for this hike.  It will be a good backup camera, but doesn't have the clarity or depth  I'm used to.)
Posted by Jean at 10:00 PM

What a beautiful place!
I love seeing mushrooms as well and while this may not be your 'good' camera, the pictures are still post worthy :)

Excellent Jean, loved the pictures and commentary! Beautiful spot, had no idea of that area.

Hi, Jean, so nice to have you post about your hike, a beautiful spot once again,
Sorry not to see Maggie though :)