What colour is your ....Christmas tree?

One of the things I love about Christmas is the colour everywhere - the decorations indoors and out, brightly coloured lights on rooftops and gutters, red bows and striped candy canes and packages wrapped in shiny paper.  And so on this fifth day of Christmas, I'd like to share with you some Christmas colour.

I customarily don't have an indoor tree except for a 10" one that is part of a display I set out on my glass-topped wine rack each year. 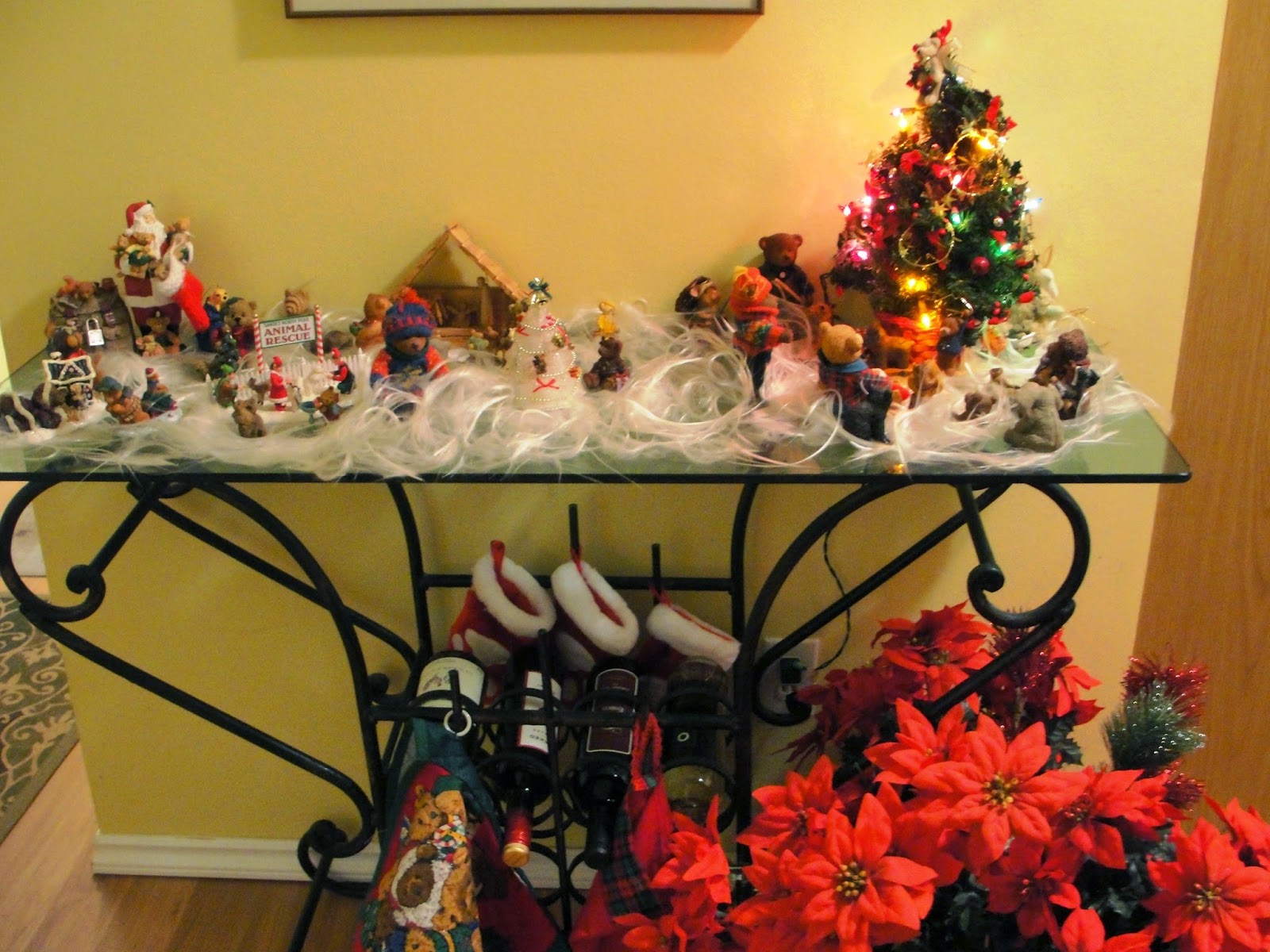 Instead, I decorate "Oliver's tree" - a potted evergreen on my patio, named in memory of one of my shelties who passed away the weekend I bought the tree. 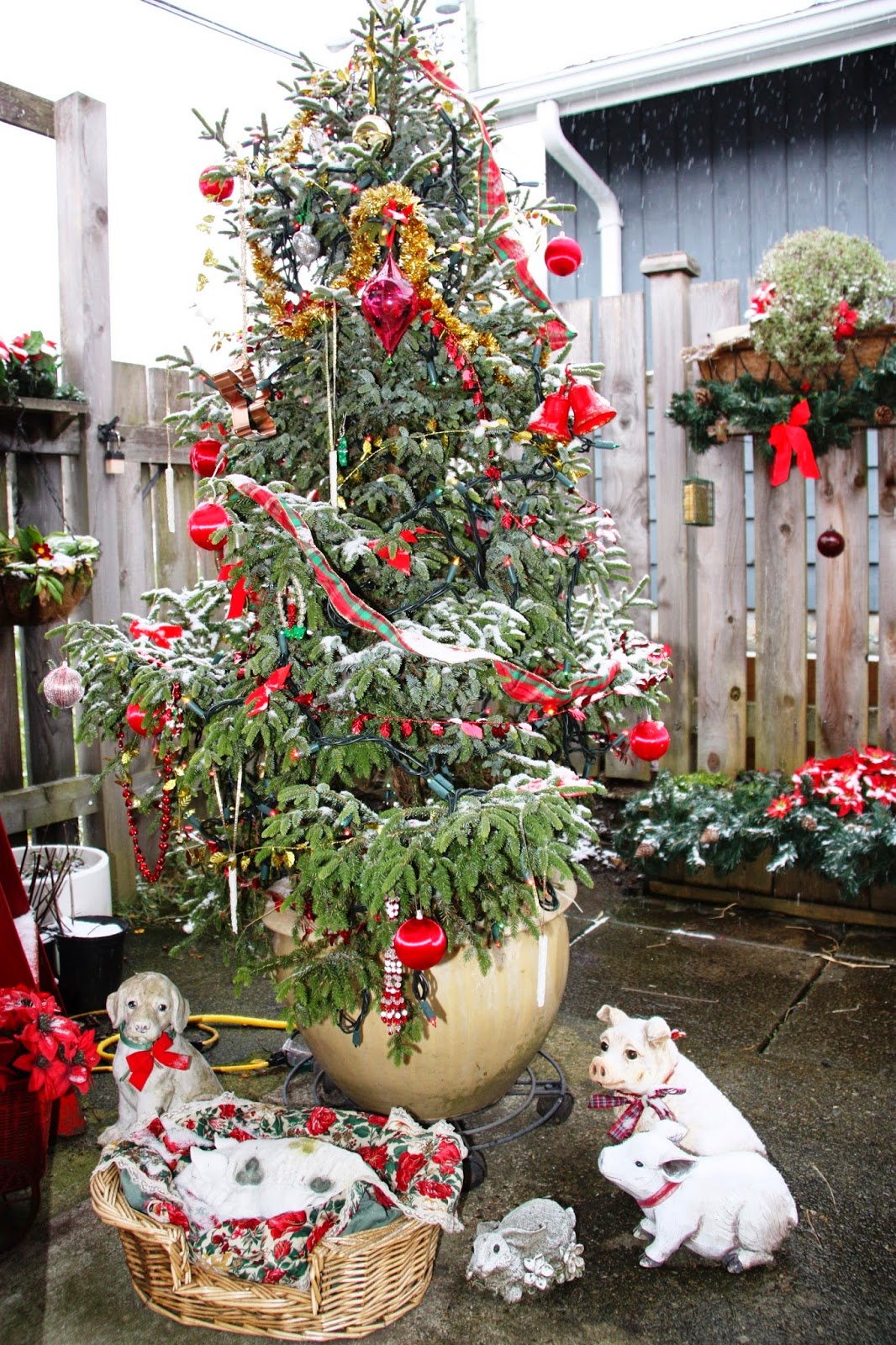 Except for this year.  This year my daughter was coming for a short visit the weekend before Christmas, when we would celebrate Christmas early - the stockings from Santa, the presents under the tree, and the dinner with Christmas crackers, plum pudding,  and a table full of guests.

Wait....presents under the tree......how are we going to do THAT around either a 10" tree on the wine rack or an exposed outdoor tree?  And so I went in search of a tree for the house - one that the cat wouldn't climb (or eat), the dogs wouldn't crash into, one that I wouldn't have to store from year to year but also one which wouldn't die an early death from being chopped down, roots amputated from a sturdy trunk.  I thought of a live potted evergreen that I could plant in the garden in spring, but research and the nursery tells me they seldom survive as the warmth of the house brings them out of dormancy far too soon and affects their growth cycles, causing them to die the following year. And then a helpful staff member at my favourite nursery made a suggestion: Winter Jasmine!

Winter Jasmine blooms in January here on the island, so with some planning it can safely be moved into the house in December, allowed to come out of dormancy, and then transitioned back outside  in early January to continue its winter blooms and early spring growth.  And though winter jasmine isn't evergreen, the many spikes that form its limbs retain a greenish hue year round.

So that's what I did - in mid-December, I brought home a good-sized winter jasmine, small enough to be up on a table out of harm's way (with the help of a dog's x-pen), large enough to support a small collection of very lightweight ornaments, most of which my daughter made back in daycare several decades ago.  Its graceful boughs cascade down, dripping with little microdot lights and  golden tinsel-type garland,  like cascading silvery water with sunlight shining through it.  The photos simply don't do it justice. 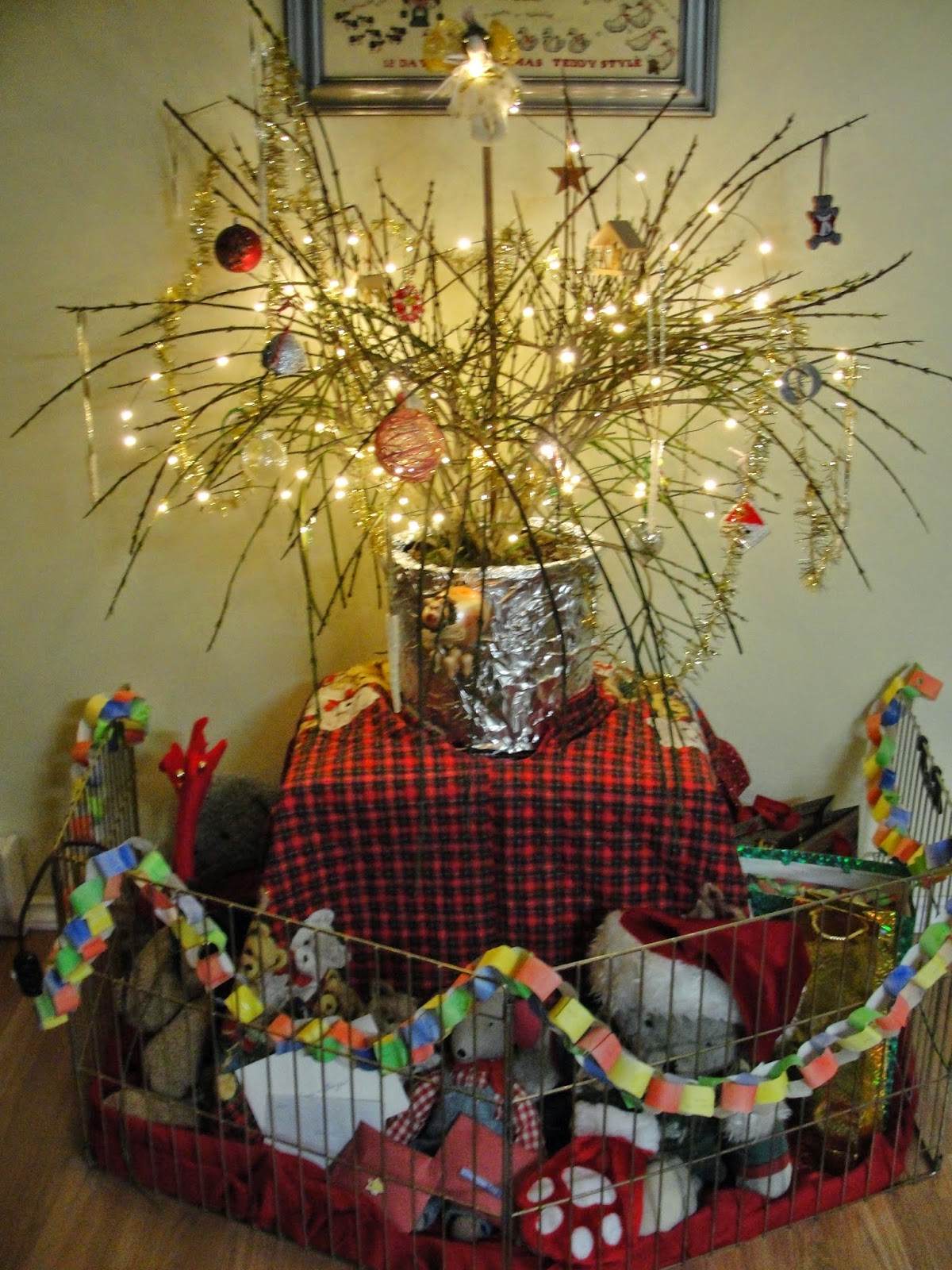 And then, just as the nursery had predicted, the buds so clearly visible when I bought it started to open. By Christmas Day it was a mass of yellow flowers, as it is today.  In the next few days I'll remove the decorations and begin the transition to outdoors - first close to the house where it will have some protection as it adjusts to cooler weather,  then eventually out to the garden, where I will be able to enjoy its display of yellow each winter and of green each spring summer and fall.

And so, while others enjoy their evergreen, or their blue spruce, or even their silver aluminum tree this Christmas, I enjoy a Christmas tree that is yellow - yellow, the colour of spring,  the season of new birth and renewal and hope.  It may not be traditional but it certainly seems fitting for a holiday which celebrates those very same things. 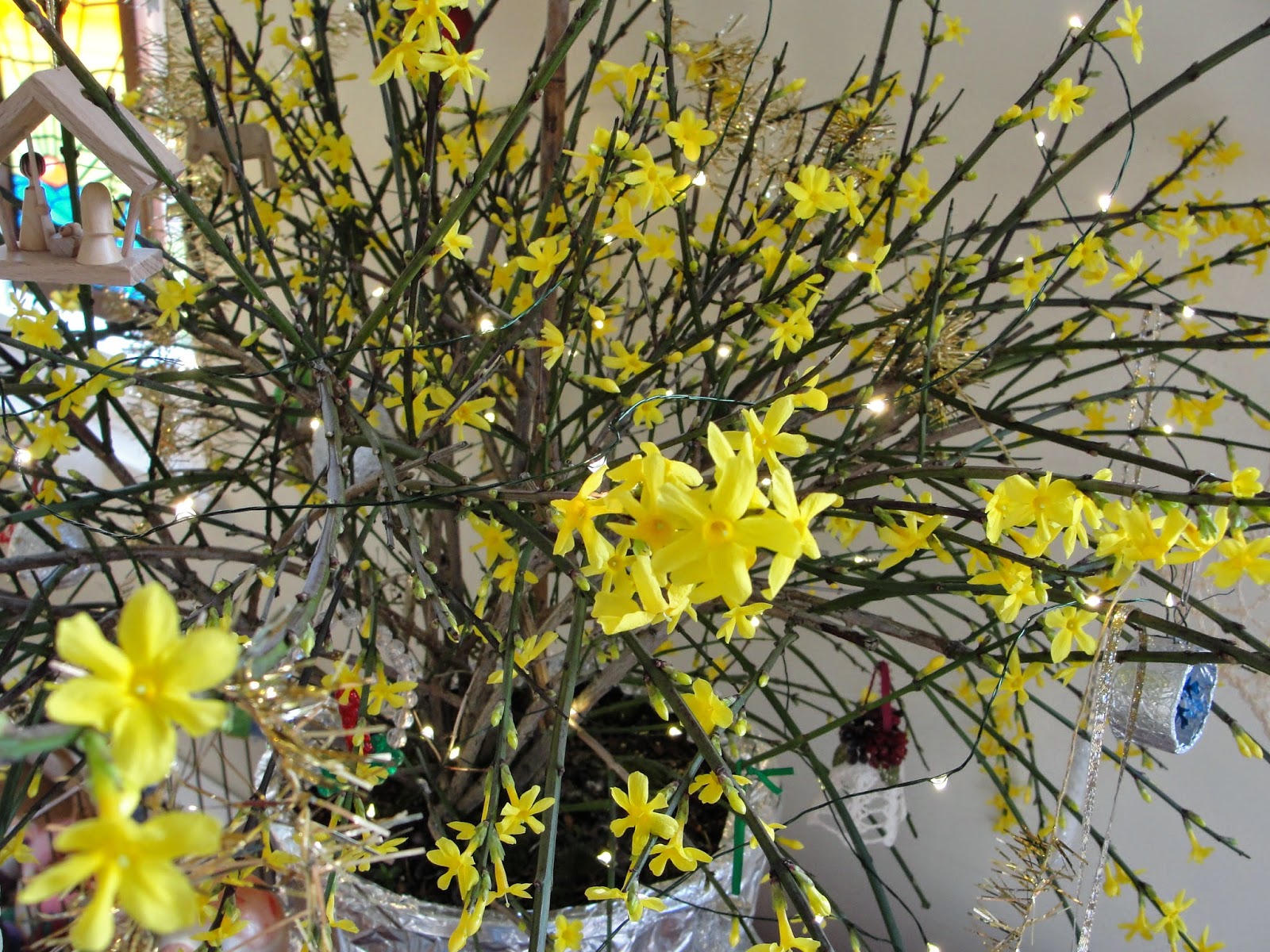 Love your Christmas tree, Jean, I wish I could have one just the same. It gives a special promise of rebirth and summer.
The flowers remind me of forsythia, is it of the same family?

Marie, it is often mistaken for forsythia but is not from the same family, and blooms earlier than forsythia. Here's a link that explains the differences: http://homeguides.sfgate.com/flower-difference-between-forsythia-winter-jasmine-77618.html

You are right Jean the picture doesn't do it justice. Much lovelier in person.

I remember making paper chains as a small child in England :)

Karen, I remember making them when I was a little girl in England, too. The one in the picture above was one my daughter and I made (in Canada) when she was about 2 or 3 years old - back in the 1970s.